Rise and Shine is beautiful, funny, and surprisingly thought-provoking, but a dated approach to difficulty makes it more frustrating than it should be.

A lot of people seem to look back on NES games and their infamous difficulty with rose-tinted glasses. They remember hours and hours spent sorting in front of the TV, trying to get past even the first few levels of Ninja Gaiden, Castlevania, and Battletoads. Now those kids are grown up, and many are trying to recreate those sorts of experiences.

The problem is that in all that misty-eyed nostalgia, it’s easy to forget all the frustration and anger that those games caused. “NES-hard” games are hard because, frankly, they were badly designed. They were made to challenge players – which is fine – but they did so with trial-and-error level design and stingy life systems.

Fast-forward to 2017, and game design has come along way. Games can still be challenging, and many are made with that as the main attraction, but the philosophy around difficulty has evolved. Games should work with the player, not against them; be unforgiving and brutal, but give players the tools they need to overcome those hurdles. For all the talk about how hard Dark Souls is, its genius is in the way it ingratiates players to its difficulty and subtly trains them to be able to meet its challenges. That’s something that’s missing in most games thatbuy into the fetishization of difficulty. They channel the dated NES approach to difficulty in an age when there’s so much competing for our time and attention, when we have more games than we know what to do with. A game that’s frustratingly hard, rather than compellingly hard, is easy to put down and forget about.

Rise and Shine cuts an odd path between these two extremes. It’s a run-and-gun platformer full of harsh, borderline unfair encounters, but a very generous checkpoint system makes it easy to get caught in a loop of “just one more try” – at least, until you realize you’ve been retrying the same section of a level for half an hour and you’re no closer to success.

That’s Rise and Shine’s problem: it’s hard, but there’s not really any learning curve to make the trial and error work. It’s always pretty clear what you need to do – shoot the thing’s weak points while avoiding its attacks – but doing that comes down to twitch reflexes and dumb luck. Finnicky controls don’t allow for the precision aiming that’s often required, so you’re left to just unload in the general direction of your target and hope some of your shots land. Enemies are typically plentiful, and they like to fill the screen with slow-moving projectiles, but these aren’t the carefully-designed shot patterns of a bullet hell shmup. Very sensitive hit detection and bullet spam that tracks your position makes it too easy to back yourself into a corner where death is inevitable. 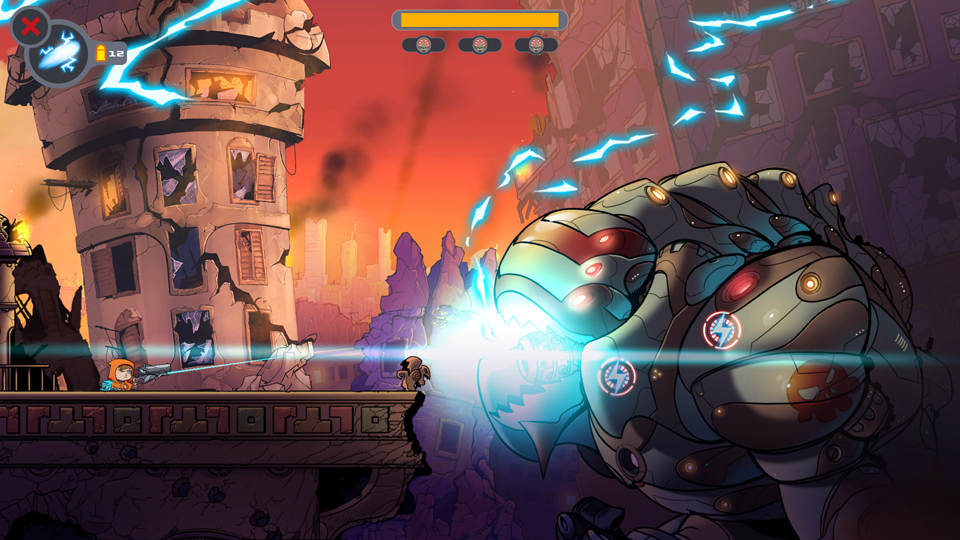 It’s frustrating. The generous checkpoints and quick reloading make it easy to keep trying, thinking that next time we’ll be the time you get it right, but that only works until you realize you’re just doing the same thing over and over, without learning anything. Victory isn’t hard-earned and satisfying; is random and comes with only a relief at not having to pay that part of the game any more.

That’s a shame, because unfair difficulty aside, Rise and Shine is a neat game. Gunplay is simple but punchy (aforementioned aiming problems notwithstanding), with a variety of different types of bullets with various effects at your disposal. There’s also a remote-controlled shot, and some wonderful puzzles involving navigating this through complex, mine-laden mazes to hit an out-of-the-way switch. The more creative blogs designs also make use of this, asking you to navigate a bullet through a maze while frantically avoiding enemy shots.

Rise and Shine forgoes the pixel-art aesthetic favoured by retro-inspired games; instead, it’s made up of beautiful high-res 2D sprites and art. Backgrounds are detailed and colorful, and character and enemy designs are creative and full of life. There’s a comically exaggerated, bloody violence that looks almost out of place, given the cartoony look of the game, but somehow it manages to tie everything together. Wrapped around all of this is a simple story about an attack on Earth and the journey of an unlikely hero to save the day. The twist on that very familiar plot device is that Rise and Shine knows its a game and runs with that. The hero’s unique power is the ability to respawn after death, and the game is chock full of references to classic games and silly parodies of the medium’s tropes. It’s irreverent and absurd, but even so, it manages to touch on more grounded ideas, like the human cost of war.

I just wish a bit more care was put into the approach to difficulty. I’m not saying it should be easy – indeed, death and retrying are fundamental to the game, on a thematic level as much as a mechanical one. But instead of carefully designed difficulty that trains the player to meet the challenges, Rise and Shine gives you brick walls and asks you to bash your head against them until they break.

Rise and Shine is developed by Super Mega Team and published by Adult Swim Games. It’s available now for Xbox One and PC.