I’m pleasantly surprised at how much I’m enjoying Dissidia Final Fantasy NT. I wasn’t a big fan of the previous Dissidia games, and this one’s 3-on-3 focus certainly didn’t fit with my general dislike for team-based multiplayer games. Perhaps more significantly, I have a weird bias against Dissidia at a conceptual level—for as long as I can remember, I’ve wanted a Final Fantasy 2D fighting game, but we keep getting these weird arena games instead. Suffice to say, I had plenty of doubts going into Dissidia NT.

At first, the game seemed like it was going to live up to those middling expectations. Even setting aside my own inhibitions, Dissidia NT doesn’t put its best foot forward, and it can take a long time for things to really click into place. This was certainly the case for me, and a few other people I’ve spoken to had similar experiences. Once you find the groove, this is a unique, impressive game, but getting to that point takes far longer than it should.

Upon starting up the Dissidia Final Fantasy NT for the first time, a brief tutorial gave me a very basic rundown of the mechanics. Attacking with Bravery attacks increases your Bravery stat and reduces that of your target, but these moves can’t actually damage your opponents’ health directly. To do that, you need to use an HP attack, which does HP damage equivalent to whatever your Bravery is at the time. So the short-term goal is to build up Bravery for a big HP attack, that will (hopefully) take out an opponent in one hit. Whichever team gets three KOs first wins the match—simple, at least on paper. After that introduction, I was dumped unceremoniously into a very bare-bones experience, with the choice between story mode, an arcade-like mode, and online multiplayer. Naturally, I picked Story Mode, only to find that my experience began and ended with a brief prologue cutscene. To unlock later chapters, I needed special items called Memoria that could only be earned by raising my player level—which, of course, left only network play and arcade mode.

Not wanting to expose myself to other players before I’d even had a chance to really get a feel for the game, I picked the arcade mode, chose the easiest setting, and went in. I got through the first match without too much hassle.

I got my ass firmly handed to me in the second.

A tutorial that gives you an overview of the different game mechanics is one thing; actually putting those teachings into practice in a live match is something else entirely, and Dissidia Final Fantasy NT just throws you into the deep end. It’s not just a case of knowing the difference between Knowing the difference between a Bravery attack and an HP attack is important—the former raises your Bravery stat and lowers that of your opponent; the latter does damage to the target’s health based on however much Bravery you have at the time—but knowing when, where, and why to use the different moves at your disposal is crucial. Likewise, learning how to effectively defend yourself in melee combat is vital, and figuring out how to use the space that the game’s arenas afford you goes a long way. None of this is stuff that can be taught outright, to be fair—it all comes with experience—but when fighting games have gotten a lot better of late at introducing strategic concepts in their tutorials, the lack of anything similar in Dissidia is stark. This is made worse by the fact that the game isn’t quite like anything else out there in terms of match flow and tactics; even if you’re a fighting game veteran, you can’t really bring that experience to Dissidia in any meaningful way, because the structure of the game—and the strategy that comes from that—is so different.

There’s the added complexity of Dissidia‘s team-based structure. No matter how good you’re defence, getting double teamed or attacked by some distant, offscreen foe will inevitably open you up. Instead of the mixups, footsies, and frame traps that make up the close-range combat in a typical fighting game, the focus is on spatial awareness and good teamwork–in that sense, it probably has more in common with a hero shooter than anything else.

After a few more arcade mode attempts, I was feeling a bit more comfortable and familiar with the game, enough to dip my toes into online multiplayer. My first couple of bouts actually went quite well, though I owe that to beginner’s luck and other players’ apparent struggles to deal with ranged attacks—a specialty for my chosen character, Y’shtola. That soon evened out, and I found myself losing as often as I won. 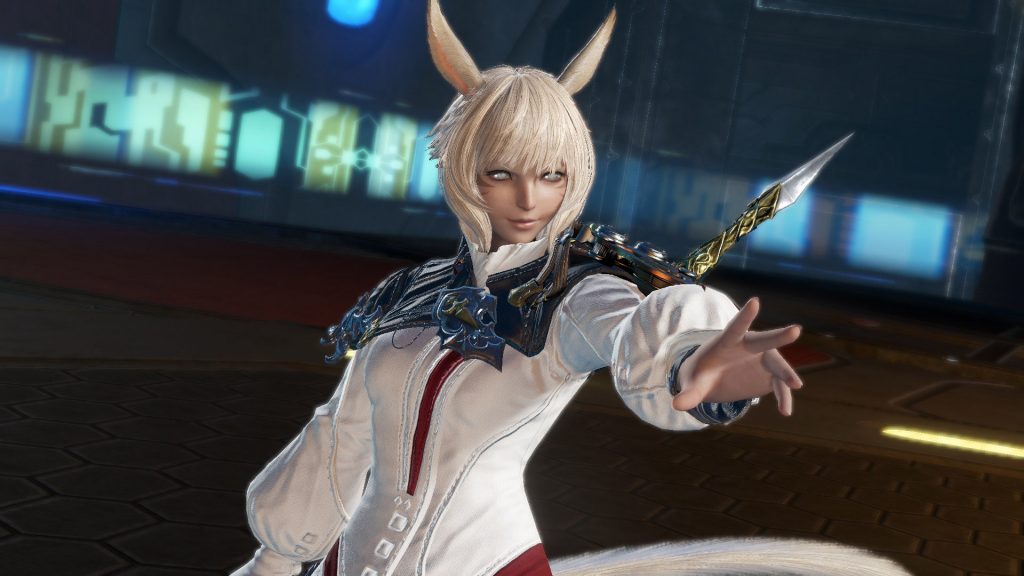 Like any competitive game, Dissidia Final Fantasy NT is a lot more fun when you’re winning, but what made the early losses so frustrating was that I couldn’t figure out where I was going wrong. There’s so much going on in any given moment in a match that it’s hard to know what to focus on. Across the cast there’s a wide variety of different attacks with different effects, but without any sort of in-game move lists, it’s tricky to figure out what those effects actually are.

In short, there’s a lot to learn before you reach a point where you actually feel like you’re playing the game properly, and Dissidia Final Fantasy NT does a woeful job of actually sharing that information with you or giving you ways to build up your skills and experience. It’s a grind.

Man with the Machine Gun

But, at some point, everything clicked into place, and ever since then, I’ve been having a blast with the game.

It’s probably best described as an odd mix between fighting game, hero shooter, and MOBA. That makes for a fascinating experience–it’s both fast-paced and deeply strategic, combining the quick reactions of melee combat, bigger-picture strategy elements, and synergy between different character roles. 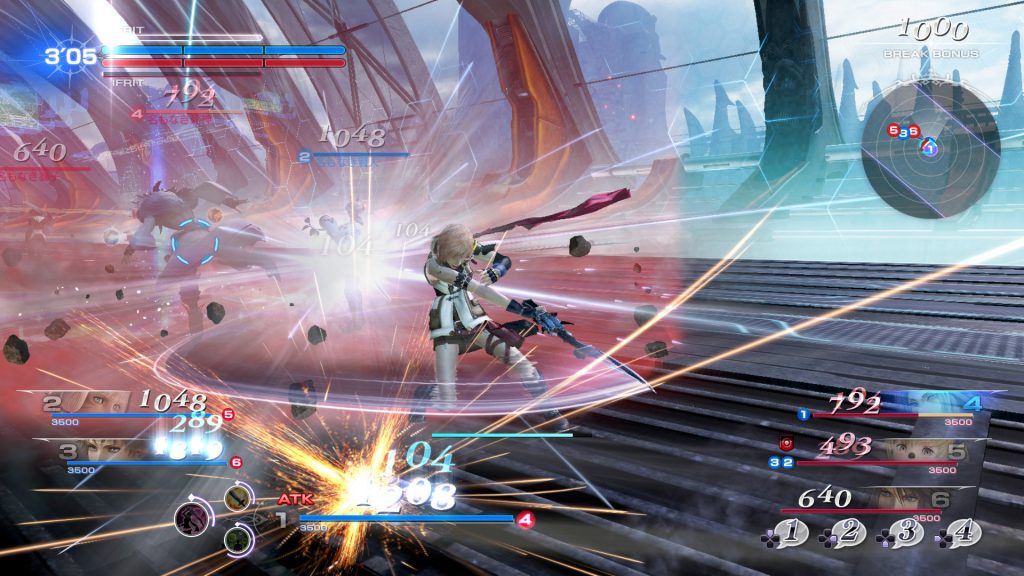 Losing is still frustrating, but now it feels like I’m being outclassed by other players, rather than by the game itself. Crucially, I can also figure out why I lost and learn from that.

It probably helps that I’ve found a character who’s just right for me in Y’shtola. She’s a long-range spellcaster with a lot of neat support tools, like an AOE heal and traps that she can lay around the arena. Other characters offer very different experiences: the Warrior of Light is a tank who can force enemies to target him and only him; Lightning is an aggressive fighter who can switch between melee and ranged focus as the situation demands; Exdeath has a lot of teleportation moves that can be hard to keep track of. There’s plenty of variety, and a lot of depth to each character.

Being a team-based game, Dissidia Final Fantasy NT works best if you’ve got a squad with good communication, and who can all work well together; naturally, creating your own team tends to fare better than playing solo and getting grouped with random players. Fortunately, there are two separate ranked modes, one for solo players and one for pre-formed groups, which evens the playing field a little bit. If you’re playing solo, you can take solace in the fact that all the players on the other team are solo as well, and face the same obstacles to good teamwork as you do. On the other hand, playing on a pre-made team is probably where Dissidia at its best. It’s here that you can really push the game’s strategic bounds while your opponents do the same, creating an utterly compelling, strategic game. I can’t think of any other competitive multiplayer game I’ve enjoyed this much (outside of more traditional fighting games, at least), and that says a lot.

Echoes of Ages Past

All of that said, Dissidia Final Fantasy NT still does suffer from its general lack of features, especially for the more casual audience. It’s bizarre to have, in a Final Fantasy game of all things, a Story Mode that you can’t just play through from start to finish. The story itself is incredibly dull, though, so you’re not missing out on much of you skip it entirely. Arcade mode can be a bit of idle fun every now and then, but fighting against the AI in a game like this quickly loses steam.

Even with the inclusion of my girl Y’shtola, I still have plenty of concerns with the roster. Square Enix and Team Ninja have defaulted to the “main” hero and villain from each game, for the most part, so you get these awkward situations where Vaan, Tidus, and Zidane are present at the expense of far more noteworthy characters like Balthier, Fran, Yuna, Freya, Vivi… Square Enix has some big DLC plans which will hopefully even things out, but I still wish that there was a bit more variety and creativity in the initial roster.

One last bone I have to pick is with matchmaking. I often found myself matched against far stronger players, even with matchmaking set to find players of a similar level. That might just be a sign of a relatively small player-base, but whatever the cause, it’s frustrating. In a few cases, I even found myself teamed up with an AI-controlled character when a third player couldn’t be found; when the other team has three actual humans playing, those AI partners become a huge liability. Despite all that, when everything comes together, Dissidia Final Fantasy NT is fantastic. As far as competitive multiplayer games go, it’s found its niche, and if you can get past the steep initial learning curve, you’ll find one something unique and captivating. Even as someone who generally hates multiplayer games, especially the competitive variety, Dissidia is a game I can’t stop playing.

If you enjoyed this review and plan to buy Dissidia Final Fantasy NT, you can support Shindig by using this Amazon affiliate link.