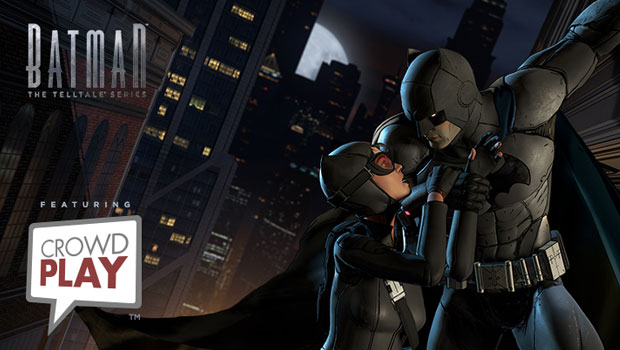 The other day, Telltale Games announced that Batman: A Telltale Series would include a new multiplayer feature called Crowd Play, allowing groups of people to cooperatively make the decisions that drive the game. This could be huge, mainly because it’s reinforcing something that I think has long been true for Telltale’s adventures—they may be single-player games, but they’re fundamentally social and collaborative.

Telltale’s games draw heavily on TV in terms of structure and presentation, and TV is absolutely a “multiplayer” experience. For as long as television has been around, people have been watching it in groups as families sat down after dinner, or friends gathered for Saturday morning cartoons. You can watch them solo, and some shows are, arguably, best experienced that way, but one of the great strengths of TV has long been the social aspect—the water-cooler discussions the next day at work, the widespread, unified excitement for the next episode. In an age of social media and on-demand viewing, this is more apparent than ever. Just look at Twitter after a new episode of Game of Thrones has dropped, or at the thousands of people co-watching their favourite show by way of hashtags.

Telltale games have long tapped into this phenomenon with the episodic structures of their games, and went one further with community breakdowns of key choices made throughout each episode—you know, “You and 53% of people chose to do the thing”—adding another element of subjectivity to those water-cooler discussions. Moreover, the core hook of every modern Telltale game, the choice-and-consequence mechanics, make them remarkable candidates for “co-watching” as players make decisions together. My wife and I can’t be the only ones who treat a new episode’s launch like a movie night.

I’ve heard so many stories of people cooperatively playing what is ostensibly a singleplayer game, be it through old-fashioned same-room TV watching or newfangled technologies like streaming. A couple of years ago, Nordahl Grieg High School in Norway made headlines by using The Walking Dead as a learning tool for ethics and morality. In fact, Telltale have made crowd-play events a cornerstone of their marketing approach in recent years, with hundreds of lucky fans crowding into cinemas to play through the first episode of a new game together.

It’s this that Crowd Play is tapping into, by making something that so many people do already easier through a system to facilitate. People will still play the games like they always have, with all the yelling at the screen that comes with that, but it’ll now just be a little bit easier for people to actually have their voice heard, so to speak.

For me, one of the most exciting things is the possibility of more classroom use of Telltale games. I’m sure Nordahl Grieg isn’t the only school to have used The Walking Dead as a learning tool, but the logistics of getting a class of 20 or 30 kids to make these decisions, and within limited time-frames no less, must be a huge hurdle to overcome. With Crowd Play, that becomes a non-issue. I’d love to see games in general given more classroom presence, especially in media studies and English classes, and Crowd Play could really open that door.

We’ll find out soon enough how well Crowd Play works in practice, but aside from the possibility of technical hiccups, I’m confident it’ll be huge because it’s just helping players do what so many of us are doing already—playing Telltale games collaboratively.