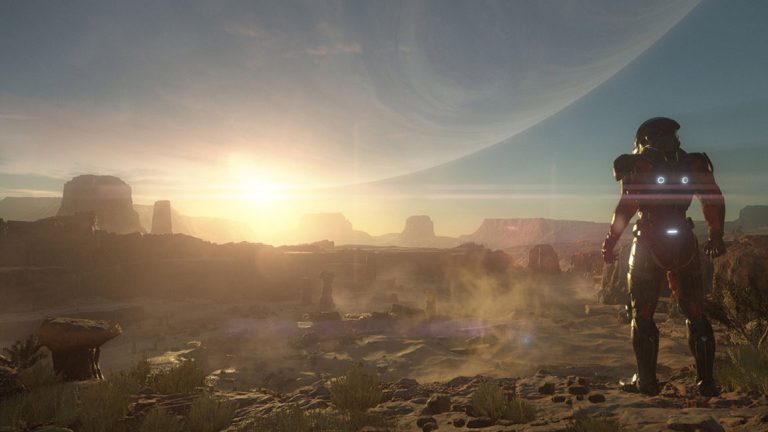 Prior to Andromeda, my only encounter with the Mass Effect series was a brief few hours with the first game. I enjoyed what I played of it, but the Xbox 360’s infamous Red Ring of Death cut that short. I got a PS3 as a replacement, but by the time BioWare’s spacefaring epic dropped its Xbox exclusivity, I’d moved on.

I think that’s part of why I’ve enjoyed Mass Effect: Andromeda as much as I have. I didn’t come into this game with the burden of expectations from what came before, so I couldn’t be let down by any perceived failure to live up to its legacy – something that seems to underpin a lot of the game’s bad press. I was able to just enjoy Andromeda for what it is: a game that’s admittedly rough around the edges but nonetheless exciting, moving, and thought-provoking.

Mass Effect: Andromeda tells the story of the outcome of the Andromeda Initiative, an effort by the various peoples of the Milky Way to find new places to live within the Andromeda galaxy. Around 100,000 people were put into cryogenic stasis and sent on a 600-year journey to settle new homes in distant lands.

Such endeavors rarely go according to plan, though, and the Andromeda Initiative is no exception. When the so-called “golden worlds” turn out to be anything but, the settlers are left with little choice but to live it their days aboard a space station – at least, until a Pathfinder called Ryder (that’s you) comes along to salvage the mission. Such is the setup for a game that’s all about hopping from planet to planet, exploring, and trying to make them habitable. Running through all the usual RPG and open-world systems is a focus on discovery; it’s not just about leveling up and checking off quests in a journal, but about seeing what each new world has in store.

And what’s in store is plenty. Mass Effect: Andromeda gives you four planets to explore – that may not sound like a lot, but each world is huge, and full of things to discover. From desert wastes of Eos to the snowy Voeld, each planet has its own unique biome that fills it with natural wonders. Leftover technology from long-extinct alien races also dots the environments you explore, to add another layer of mystery and excitement to your adventures. The best thing about the game is that feeling of visiting new places; the feeling of awe and anticipation as you head towards the surface of a new planet is hard to describe.

It helps that Andromeda doesn’t fall quite so far into the trap of filling each map with a laundry list of things to do. There are plenty of sidequests, but not to the point that they become overwhelming or get in the way of the exploration element that the game does so well. If anything, most sidequests serve to enhance that experience by prodding you in new directions – something that a lot of games try to do with their missions, but don’t often find success. Those sidequests are also a chance to get to know the companions that Ryder meets along the way. From the gun-toting Drack to the sensitive Jaal, each character is unqiue and offers a different perspective on the whole situation, and the journey of getting to know them is a rewarding one. Ryder, too, is a far more interesting character than I’d expect from a player avatar; you have a lot of scope to direct her personality through dialogue choices (which aren’t locked into a Paragon/Renegade dichotomy, thankfully), she still shows plenty of character. You can guide her development, but she’s anything but a blank slate.

I’ll be honest, the main scenario is kind of dull ones it gets into its groove – it turns into a very generic story about fighting an army of evil aliens – but the characters and interactions between them bring everything to life. The main storyline has its character moments, but it’s very focused on pushing the plot forward, so it’s the sidequests that do the heavy lifting in terms of character development.

With the villainous Kett running around and trying to kill you at every turn, there’s a lot of fighting to be done. Fortunately, combat has come a long way since those few hours of Mass Effect I played almost a decade ago. It’s still, essentially, a third-person cover shooter, but there’s a lot of mobility thanks to jetpack-enabled jumps and dashes. If you want to play it like a cover shooter, there’s that option, but I found it far more interesting (and effective) to dart around each battlefield, flanking enemies and closing in for some good old-fashioned shotgun action. Not all the aliens you encounter are enemies, though, and this is where Mass Effect: Andromeda gets iffy. Fundamentally, it’s a game about humans and other Milky Way races attempting to colonise other planets for their own needs. Some of those are already inhabited, so the story becomes one of colonialists forcing their way into other people’s homes, regardless of the needs and wants of the indigenous people. At first, it seems like Andromeda is going for a deep exploration of colonialism as a theme, and characters – including Ryder – question everything what’s happening. That ultimately falls to the wayside in favour of a generic good-versus-evil plot, where the colonialist heroes are welcomed with open arms. It’s very uncomfortable, but not in a way that seems deliberately provocative.

Mass Effect: Andromeda also suffers from some well-canvassed technical issues. As amazing as the environments look, the Frostbyte Engine isn’t well-suited to the subtleties of character and emotional expression, so there’s a lot of awkward or downright creepy animation. Eyes flit about in their sockets, and characters’ faces twist and distort in robotic ways for something as simple as a smile. It’s not as bad as a lot of people have been saying (granted, I played with a patch that apparently fixed up the animations somewhat), but it still doesn’t look great.

It’s also still full of bugs, though the most game-breaking ones seem to have been ironed out. I spent a lot of time wandering around aimlessly because quest waypoints deactivated themselves, and I frequently ran into issues with environmentally-triggered dialogue overlapping or queuing up in ways that made for very strange, nonsensical conversations. Again, nothing game-breaking, but still enough – and happening often enough – to detract from the overall experience of the game. Still, I enjoyed my time with Mass Effect: Andromeda. I don’t know how it compares to the rest of the series, and the bugs and a main plot that’s a bit too pro-colonialist definitely held it back from being as good as it could be. The sense of exploration and discovery it fosters, though, is something that few games do as well as Andromeda, and it’s successfully piqued my interest in checking out the rest of the series.

Mass Effect: Andromeda is developed by BioWare and published by EA. It’s available now for PlayStation 4, Xbox One, and PC.