Need more buttons? The PS4 Back Button Attachment has you covered 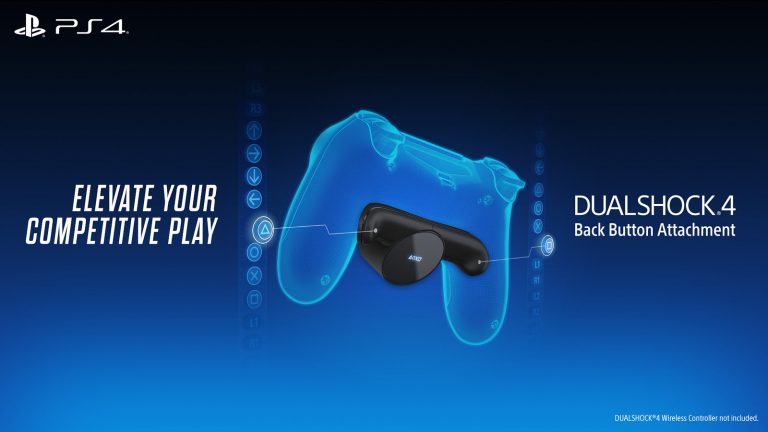 If one thing’s become clear in this console generation, it’s that there’s a lot of demand for customisable controllers. A handful of third parties have made “pro” controllers their bread and butter, with things like buttons that are fully remappable at the hardware level, hair-trigger switches, and extra buttons conveniently located by fingers that would otherwise be sitting idle.

The DualShock 4 Back Button Attachment is Sony’s attempt to dip its toes into those waters. Where most of those other controllers are aimed at the pro gamer crowd—with price points to match—the Back Button is a cheaper way to add some of that extra functionality to the standard PlayStation 4 controller.

Simply put, the Back Button is an attachment for the DualShock 4 that adds two extra buttons to the underside of the controller, right around where your ring fingers would normally be resting. You can map any of the other PS4 buttons to the two new ones, including D-pad cardinals and L3 / R3, and can save three different profiles at once for easy cycling through.

What this does is let you take a little bit of pressure off your right thumb, which—being the finger that’s normally used for the four face buttons—would normally do the lion’s share of button-pressing in most games. With a standard controller, it can be awkward to press two face buttons at once, and there’s that extra travel time as you move your thumb to the button you want to press—a fraction of a second, but that can make all the difference in some games.

The obvious benefit of the Back Button Attachment, then, is taking some of that pressure off by mapping a couple of face buttons to the new buttons, with your spare fingers resting on them, ready to press at a moment’s notice. Or you could do something like create a “jump” button in a fighting game by binding the Up D-Pad button, or double up on a chosen button for easier rapid pressing. Coupled with standard controller remapping, you can even create a setup where—to use Street Fighter as an example—you’ve got all six basic attack buttons bound to the (now) six shoulder buttons, each one with a dedicated finger.

Setting the Back Button up is very straightforward: it just plugs into the headset port, and then you’re good to go with the default profiles. Switching profiles is a matter of just tapping the touchpad in the middle of the Back Button unit, and editing any of those profiles is a simple case of holding the touchpad briefly then pressing each button to cycle through available assignments until you have what you want. The touchpad also has an LCD display that’ll show what each button is assigned to, eliminating the need for trial and error when you’re cycling profiles or want to double check if you’ve set up the buttons properly.

For all its convenience, the Back Button Attachment does take some getting used to. It changes the form of the DualShock 4 quite substantially, and though not exactly heavy, the little bit of extra weight is noticeable. While the extra buttons themselves are responsive enough, getting used to actually using them can take a while—a lifetime of training those ring fingers to just rest idly while gaming takes some effort to unlearn, it seems.

The lack of bells and whistles might also be an issue for anyone looking for a more hardcore, fully-featured pro controller. The Back Button is simply two extra buttons; no more, no less. If you want hair-trigger switches, interchangeable paddles, and the like, you’re going to need to shell out for one of the pricier third-party controllers.

But for anyone who wants to get a little bit of extra functionality out of their stock PS4 controller without breaking the bank, the DualShock 4 Back Button Attachment is a good way to go.