Yukie: A Japanese Winter Fairy Tale is a haunting interactive folk tale, and another example of what can be done with RPG Maker and a bit of creativity.

Despite the limitations of RPG Maker as a development tool, a lot of folks have been able to produce some fascinating games with it, and not just RPGs. The best-known example of this is probably To the Moon, a heartfelt adventure game about a dying man’s last wish, but there are plenty of other noteworthy examples, too. The Corpse Party horror series began life with an RPG Maker game, and Kokurase delivered a bizarre, hilarious dating sim.

It’s in this tradition of creative RPG Maker games that we get Yukie: A Japanese Winter Fairy Tale. It’s part RPG, part visual novel, part walking simulator, and part action game, with all these different elements combining to tell a bittersweet fairy tale of tradition, duty, honour, and sacrifice. It can be clunky and it can be frustrating, but it’s worth putting up with that to see the story Yukie tells and the clever mechanics it builds into that.

Yukie tells the tale of a yuki-onna, a snow-themed yōkai that appears frequently in Japanese folklore. In this game’s take, the titular Yukie is a demon who fell in love with the First Man, whom she brought to life from the world of stories. However, his mysterious disappearance drove her mad, causing her to blanket the land in an eternal winter. She feeds off the lives of humans, and the only people who can stop her are her children – though none have succeeded. 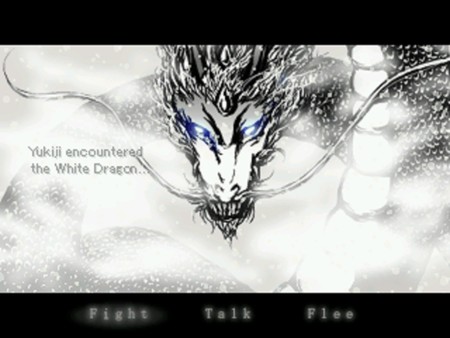 You play as Yukiji, the youngest of Yukie’s children and the person now burdened with the task of slaying Yukie. To do that, he’ll need to channel the power of his ancestors by finding their swords out in the snowy wilderness. This is where the game starts to get really interesting: instead of the exploration you might expect from such a premise, Yukie is a walking simulator in the most literal sense. You travel across the tundra by walking from right to left, trudging through seemingly endless snowdrifts, while a narrator recounts details of Yukie’s history to give context to Yukiji’s mission.

In stripping back almost every mechanic you’d typically associate with an adventure game, Yuki drives home its atmosphere in a powerful way. It’s mundane, because Yukiji’s journey is, for the most part, mundane. As you slowly make your way forward, the haunting soundtrack and black-and-white art direction drive home the loneliness of Yukiji’s mission and his trepidation. He’s bound by fate to slay his demon mother, a task none before him have been able to achieve. That’s some heavy stuff.

Every now and then, Yukiji gets attacked by wild animals, starting what at first glance looks like a random, turn-based encounter typical of RPGs. You’ve got three commands: Attack, Talk, and Flee. The last one is self-explanatory, and Talk can lead to a non-violent resolution to the encounter or share a bit of extra narration. Attack is what you’ll use most of the time, and it plays out in a way that simply but cleverly captures the feeling of being a wandering swordsman. 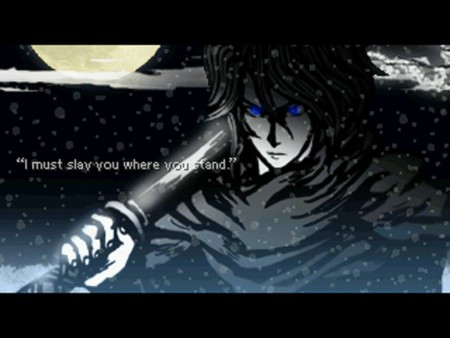 When you select attack, the screen goes black except for an image of Yukiji with his eyes closed. The music goes quiet, and you’re told to listen for the sound of the enemy’s approach; when you hear it, press the confirm button to attack. There’s a visual cue as well, with Yukiji opening his eyes, but the sound is the most reliable way to successfully land an attack – to the point where I would close my own eyes in real life and just listen, waiting for the right moment to strike. In most cases, one hit is enough to defeat the enemy and end the battle.

When it’s the enemy’s turn, you can block the attack by holding either the left or the right directional button, depending on the direction of the attack. Again, this is marked with both a visual and an audio cue, but in this case I found the visual much easier to deal with – in theory, you should be able to hear which side the attack is on with stereo sound, but I was never really able to pick this up reliably. Responding to icons that appear at the relevant side of the screen is a lot easier, at least in my experience.

That said, blocking still isn’t easy, with just a fraction of a second to react before you take a hit. Against normal enemies that’s fine, but against bosses, two or three missed attacks is usually the limit before you get a game over. This is where Yukie gets frustrating; it’s primarily a narrative experience, but there’s a high difficulty barrier to overcome, and you can only do so with quick reactions and a bit of luck. Even with the ability to skip some dialogue, getting back to where you were before the game over takes time, between the slow (but admittedly beautiful) fade of the game over screen, loading your save, and then trudging back to the boss. You can save anywhere, but if you forget to do so, that can be a lot of ground to retread. 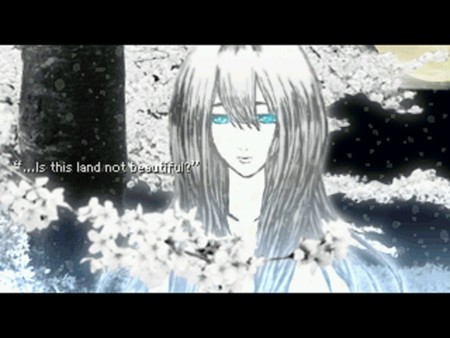 When they’re not repeatedly killing you, the bosses themselves are a source of much of Yukie’s story. In almost all cases, you can’t beat a boss by attacking it – at least, not at first. The only way to proceed is with the Talk command, allowing Yukiji and the boss to exchange words and flesh out the story by a means aside from third-person narration. After an exchange, the boss will attack, forcing you to block, and then you get to talk some more. This is how most boss encounters go, until you “finish” the dialogue and some narrative trick allows you to finally attack the enemy in earnest.

As with walking, this back-and-forth of words spoken and strikes blocked is a slow and mundane process, but again, it all helps to build up the mood of the game. Yukiji is a lone soldier marching to his almost inevitable doom, bound by blood and by duty. Yukie is a solemn folk tale, and its commitment to atmosphere is one that permeates every facet of the game. It’s a game best played in a quiet room with headphones, so that you can just let everything wash over you.

It can be a frustrating experience, but for those willing to endure some clunkiness for the sake of a beautiful story, Yukie is a worthwhile experience indeed.

Yukie: A Japanese Winter Fairy Tale is developed by ImCyan and published by Playism. It’s available now for PC.