Shadwen review: Diamond in the Rough 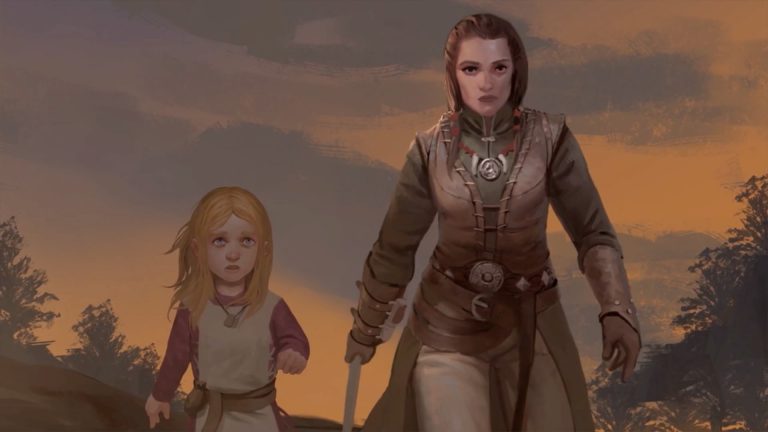 Shadwen is an interesting game. It’s not necessarily a good game, but it’s certainly an interesting one, which makes it a curious game to review. It’s so unpolished in its current state that I couldn’t in any right mind recommend it to someone looking for high-quality entertainment, but it’s so rife with good ideas, and could be such an important point of reference in the future, that the thought of it not getting some wide exposure saddens me. A game doesn’t need to be “good” to be worth playing, and Shadwen is a perfect example of that.

The basic premise is that, on the way to kill the king, the eponymous assassin saves a young girl called Lily who, with nowhere else to go, tags along. However, Lily is young, impressionable, and doesn’t respond well when Shadwen kills enemies, so there is, in theory, a strong motivation to take the much more difficult non-lethal approach. It’s a remarkable hook because, as much as the stealth genre in particular loves to flaunt the ability to take a pacifist route, it’s rarely enforced in the way that it is in Shadwen. There are games like Metal Gear Solid, where the no-killing route is purely there for an additional challenge and, perhaps, a point of philosophical projection by the player. There are games like Splinter Cell and Deus Ex: Mankind Divided where the focus is on giving players a choice in how they approach the game, with no particular aspect being framed as better or easier. There are games like the SWAT series, where playing non-lethally is the optimal strategy and killing is generally more trouble than it’s worth.

And then there’s Shadwen, where a murderous approach is by far the easier way to play the game, in a purely mechanical sense, but comes with a clear narrative cost. If Lily sees you killing people, or happens upon a dead body, she will get upset. She’ll call you a murderer, she’ll question your morality, and she’ll even become scared of you. Her reactions shine a spotlight on your actions, framing them within a moral context that is powerful and motivating, at least initially.

So, in the interests of Shadwen’s charge, you try take a non-lethal approach, only to find that it’s far more difficult. Playing aggressively, the game is fairly easy, even when you start encountering tougher enemies and layouts become more complex – luring a guard away from the crowd, quickly offing him, and then hiding his corpse in a bush is always a valid and effective tactic. Conversely, playing pacifistically presents many more problems. You constantly have to be vigilant about where guards are, after luring them out to create openings, when they might return to their post. There’s no way of thinning their numbers, so creating a safe path for progress means micromanaging the position of multiple guards at any given time. Being seen is an instant “game over” (though this is hardly as restrictive as it sounds – more on that in a moment), so you can’t just bulldog your way through. Most significant, you can’t just make your own way through; you need to create a path for Lily, who is far less athletic than Shadwen. With the non-lethal approach, Shadwen effectively becomes a puzzle game as you try and manipulate the guards to allow Lily to move from one hiding place to the next.

Some splendid level design makes this all the more compelling. Shadwen’s maps remind me of the early Tenchu games; relatively small, but with plenty of interconnected paths and a variety of constructs, giving you a lot of freedom in how you approach each section of  the city. In any given area, you’ll find high perches that are great for scoping out the area and dropping onto unsuspecting foes, dark corners for hiding in or attacking from, ledges that you can use to keep out of sight of foes above, well-lit corridors offering convenience at the cost of stealth, and other such architectural features. All of these will be riddled with crates, barrels, glass flagons, and the like, perfect for creating distractions and getting guards’ attention. There are a few tools to help you navigate these arenas, not least of all the ability to rewind time. Like Prince of Persia: The Sands of Time, time is at your command to help you undo mistakes, but unlike that game, Shadwen places no restrictions on this power. You can rewind to your heart’s content, and even if you alert a guard and get “game over”, you’re simply prompted to rewind rather than failing the mission or being sent back to a checkpoint. Not only that, but time only moves when you do (or when you manually allow it to while standing still), allowing you to basically pause the game at any point and scope out your surroundings.

This will no doubt be written off by some as “hand-holding” or making the game “too easy”, but it’s a key part of Shadwen’s design. It gives you the opportunity to be experimental in your approach, turning a trial-and-error core into something interesting and exciting rather than frustrating. Again, this is essentially a puzzle game, so it’s all about toying with the various systems in place to find solutions; the lack of a hard fail state just oils that system and helps it run smoothly.

These time manipulation abilities and the intentional dissonance between the easier, “bad” approach and the more challenging “good” one are welcome points of difference from the rest of the stealth genre. These alone makes it a notable game; one that should serve as reference material for any other developer working in the genre, and is certainly something worth playing for anyone who values innovation over polish. But therein lies the problem: Shadwen, in the state that it has been released, feels like a prototype. A really interesting prototype for what should be a fascinating game, but a prototype nonetheless.

It has a very generic dark medieval setting, which would be forgiveable if not for how tediously samey the visual design becomes. The first 14 chapters are more or less different configurations of the same environmental assets, with only the fifteenth and final chapter offering some kind of variety. All along the way, you’re killing (or not killing) the same guards – as far as I can tell, there is a grand total of two different enemy designs. Controls are not as responsive as they probably should be, especially when it comes to grappling and jumping around (though the rewind system renders this a very minor issue), and enemy AI is very simplistic.

All of this would be fine if the actual story was a bit better implemented, especially because of how fundamental it is to the core game design. For a character whose primary role is to hold you responsible for your actions, Lily spends very little time actually responding to your behaviour. Nothing at all happens within the levels themselves; she’ll casually run over a corpse like it’s the most normal thing in the world, only to suddenly start complaining half an hour later when you get to the end.

Aside from one or two motion comic cutscenes (which are, to be fair, absolutely beautiful) the moral feedback all comes from loading screen voiceover dialogue, which seems to be very binary: either Lily will have witnessed your killing, in which case she’ll express her fear and disapproval, or she won’t have, in which case Shadwen will proceed with telling her a folk tale. If you mix and match playstyles, these dialogues are distractingly inconsistent, going from Lily’s fear of Shadwen at one moment to her happily listening to a story the next – a story that you’ll probably have missed parts of, unless you played non-violently the whole way through. Lack of polish around stuff like visual design and AI isn’t really a big issue for me, but the holes in the storytelling cut straight to the heart of the game. Initially, I was hugely invested in trying to do right by Lily, and the conflict that amounted from trying to play nicely was palpable. But the lack of compelling feedback meant that, by the game’s midpoint, I was happily murdering my way through every level without a care for Lily’s impressionable mind. (I was getting trophies for my rampages, too, which seems very much at odds with the game’s core theme, but Shadwen is hardly unique in this regard.)

I want to care about Lily. I want the emotional pull to be so much that, despite the challenges presented, a non-lethal approach is the only way I can feel comfortable playing the game. I want to feel like I’ve failed this poor young girl when frustration gets the better of me and I just have to kill this one guard who’s causing trouble.

This is the potential that Shadwen holds. The core of its gameplay loop is brilliantly set up for this kind of experience, and again, that alone makes this a notable game. I hope that other stealth action developers will play Shadwen, and learn from its failings and its successes. Better yet, I hope that Frozenbyte decide to stick with it, and deliver something that truly capitalises on this game’s amazing potential – a sequel, or even some sort of “director’s cut” version of this game.

I don’t think I could describe Shadwen as a “good” game, as it stands, but it’s an innovative one that’s pushing the boundaries of what has become a rather stagnant genre. And, sometimes, that’s more important.

Life Goes On: Done to Death is developed and published by Frozenbyte, and is available now for PlayStation 4 and PC.

A press copy was supplied by Frozenbyte for this review.