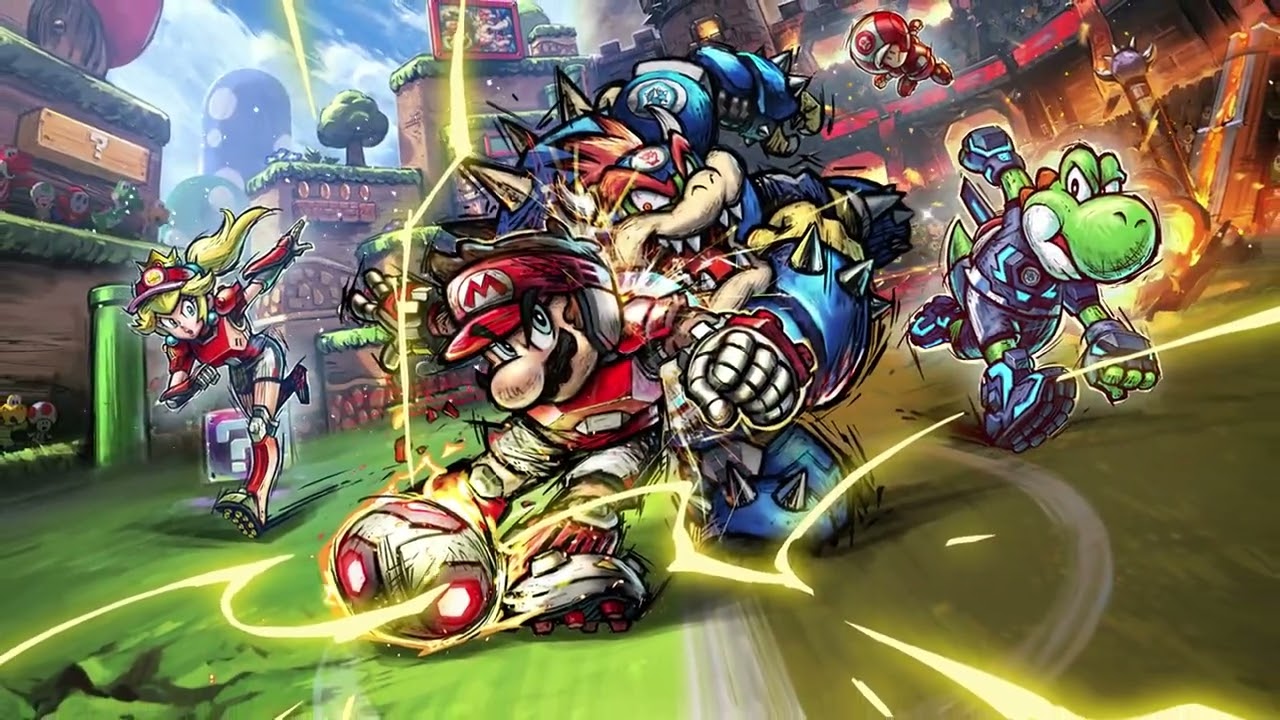 If you enjoyed watching Pepe play for Real Madrid, you’re going to love Mario Strikers: Battle League Football. The matches are brutal, tackles are rough and the on-pitch breakdowns are ever present. Fortunately, beneath the chaos and theatrics, there lies a surprisingly entertaining football game that can be enjoyed by almost anybody.

This wide accessibility is the result of a few different factors, with the primary ones being the lack of fouls within matches, the addition of hyper strikes, and smaller pitch sizes. These may not be new features to the Strikers franchise, but the inheritance of these legacy mechanics from previous entries like Super Mario Strikers assists this contemporary iteration in retaining the same arcade charm and fun factor. Being given free reign to tackle is a nice change of pace from simulation football experiences like FIFA (now EA Sports FC) and adds a layer of tension to the gameplay, as your possession of the ball is constantly under threat from tackles from any direction. This jostle for possession is naturally the most engaging aspect of gameplay. Items are also available as pickups for either side. These items are familiar foes to those who have played Mario Kart, with the likes of the banana peel and green shell making their dreaded returns.

The tackle flexibility and array of items act as an equalizer of sorts for the defending team. Whereas in other football games, the defending team can only intercept the opposition’s passes or execute carefully considered tackles to regain the ball, here all it really takes is a nicely directed shell or peel to sap the attacking team of possession. Compared to my memories of playing FIFA years ago, control of the ball flips much more frequently in Mario Strikers, likely a by-product of the defending team being granted more options to win back the ball. This could go a long way towards endearing it to players who are interested in football but are turned off by the competitive skill gap that would come with playing simulation games, where the reduced number of defensive options may result in superior players constantly dominating possession and matches.

A fresh feature in this game is the Hyper Strike ability, which is an evolution of the Super Strikes found in previous entries. The main difference here is that once the Hyper Strike item is picked up by a player, anyone from their team can perform it whereas with Super Strikes, only team captains were able to do so.  This is a pleasant change as it means there’s no longer any rush to pass the ball to the captain to execute the special shot as now they can be unleashed by anyone in the team. Goals from a Hyper Strike are only guaranteed when the player successfully places two sliding pins on the blue sections of a curved meter. Otherwise, it’s a toss up whether the strike will actually net any results. If the shot is successful, the team scores two goals instead of one, which allows the ability to be a useful crutch for the losing team. The animation for each character’s Strike is unique and leans into their persona. Yoshi for example, can turn the ball into an egg, which then bounces up and down the pitch before hurtling towards the goal. There is admirable attention to detail when it comes to these special animations and it makes each successful Hyper Strike feel like a monumental moment, akin to watching a special goal happen in a real match.

The combination of all these factors results in what is a markedly enjoyable game. Regardless of whether you are facing the AI or other players, the matches are entertaining and tense, with the knowledge that goals are only moments from being scored at any point. Even when side has a seemingly insurmountable lead, a goal or two and a Hyper Strike could turn the tides in an instant, effectively meaning neither side can get complacent at any point. It is especially fun to play locally against other players and ultimately, that’s where this game’s major appeal lies, owing to the limited amount of single player content.

It’s also visually striking (pun intended, unfortunately) and one of the best presentations I have seen in a Switch game in a long time. The resolution is sharp and the framerate rarely has noticeable dips from 60 FPS, aside from replays and in the aftermath of a Hyper Strike, where there isn’t a whole lot of interaction involved. The steady 60 FPS during regular gameplay really helps the experience feel smooth and responsive, even when playing with more sluggish characters like Wario. The characters themselves look fantastic and their animations convey their personalities perfectly, especially their celebrations and/or tantrums after goals are scored.

The single player content could benefit from additions. As it exists, there are only the 6 Cup Battles, which are multi-round tournaments to play through. Once the 6 cups are finished, the ‘Galactic Mode’ is unlocked, essentially allowing the same cups to be replayed on a higher difficulty. The Cups are exciting and each one of them boasts a gimmick, like facing fast teams in the Turbo Cup or strong ones in the Muscle Cup. These can make for some interesting matchups but ultimately, they can be beaten within a couple of hours. In future entries, more Cups and an additional mode could go a long way towards bolstering the single player experience. It could also benefit from more playable characters as the current selection of ten, while respectable, can be stretched thin during team selection as you’re likely to be playing with or against a similar group of characters across multiple matches. Free post-launch updates are confirmed to be on the way, including new characters, so this is an area where the wait for new content won’t be too excruciating.

Summary: After almost 15 years, the Mario Strikers franchise has returned in a big way with Battle League Football, an engaging arcade football experience that shines in local play. It could benefit from additional characters and an expanded single player offering but for those looking for a super accessible yet enjoyable sports game to play with others, this will satisfy that role nicely.