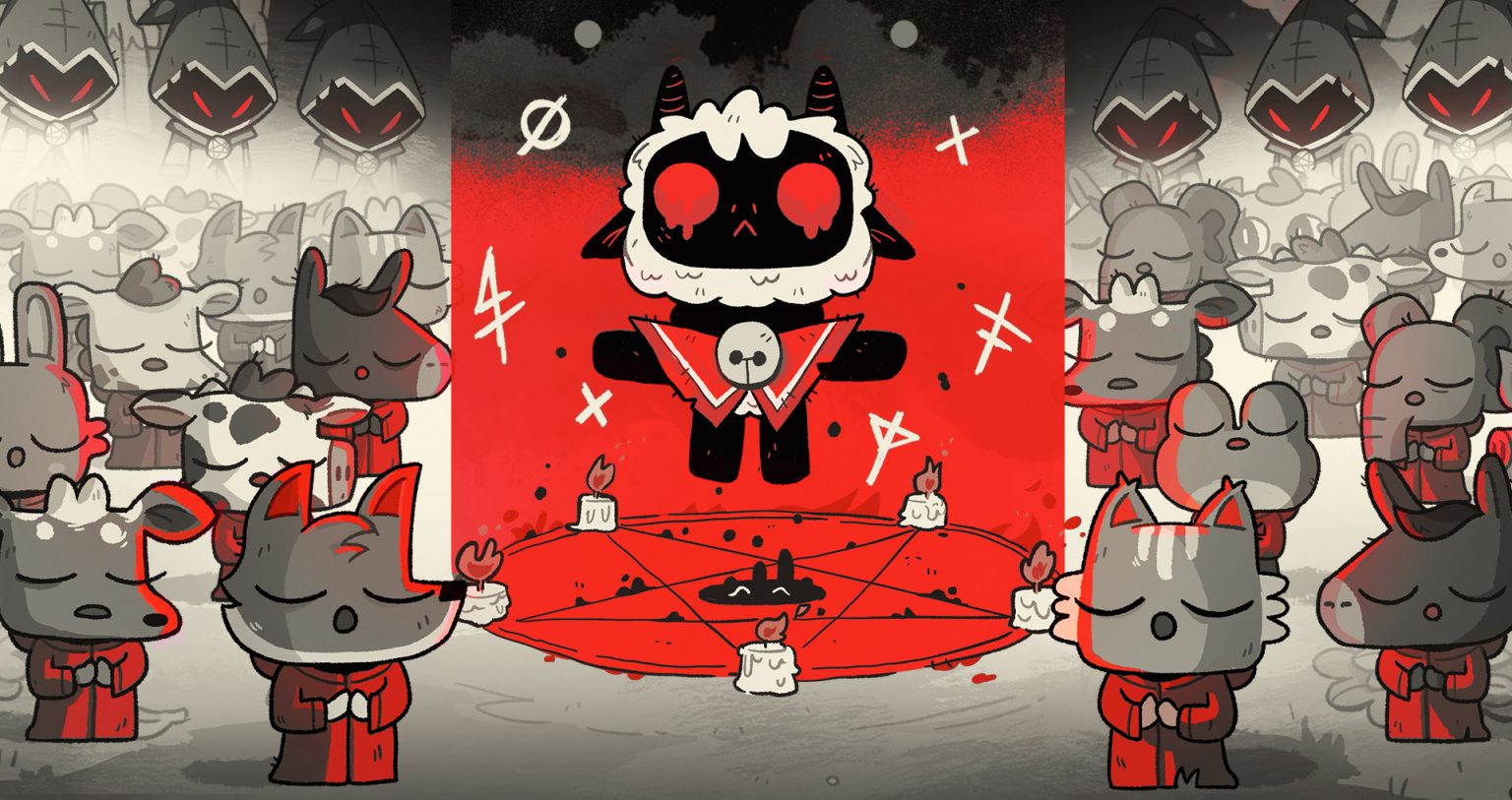 The tension of a roguelike and quiet charm of a cozy life sim might seem at odds, but Cult of the Lamb finds magic in that juxtaposition.

There’s nothing quite like a quiet, cozy life sim. The old Animal Crossing vibe; hanging out with a quaint little woodland community of cute anthropomorphic animals, enjoying the atmosphere. Maybe some leisurely gathering and crafting. A spot of farming and fishing. Y’know, just a good, wholesome time, with only the occasional ritual sacrifice here and there.

OK, so maybe Cult of the Lamb isn’t your typical life sim. But building up a following of brainwashed loyal acolytes whose dogmatic worship of yours truly gives you the power to take on a quartet of false prophets—all to pay off debt to an ancient God who brought you back from the dead after your own stint on the sacrificial altar—well, that can be a surprisingly cozy affair.

In the most mechanical (perhaps reductive) terms, Cult of the Lamb is a mashup of life sim, settlement manager, and dungeon crawler, with a light roguelike-inspired touch. Life in your camp revolves mostly around gathering resources to build new facilities, with the aim of both making living arrangements more comfortable, making sure everyone is fed, happy, and healthy, and giving your cultists space to worship. There’s darkly humorous twist on the usual formula in the whole “cult management” aspect, with various ways of influencing your followers’ faith and loyalty—from conferring “blessings”, to holding sermons, to performing all manner of rituals both benevolent and barbaric. Their  faith then feeds the research of new developments and your power as a fighter.

Meanwhile, each trip out into the woods—infested by monsters and rival cultists, naturally—is a chance to gather materials, find new followers, and get a step closer to one of the prophets by slaying their underlings. Procedurally-generated maps, random weapons and upgrades, and death bringing a run to a premature end give it that rogue-ish flavour, but it’s more forgiving than most: you’ll retain whatever you’ve collected along the way, and dungeons are short enough that even dying to an end-of-level boss feels like a minor setback at worst. (Though it’s worth noting that there are harder difficulties, and tougher, more lucrative versions of cleared dungeons for those who want something more challenging.)

This may be blasphemy to roguelike purists, but that relative lenience is a crucial piece of what allows the seemingly disparate pieces of Cult of the Lamb to click together. Despite its twisted theme and black humour—which I’ll get into in a moment—it’s a pretty laid-back game. Going through the routines of daily life in your settlement is quiet and comforting, in much the same way as any other game of this sort. By contrast, typical roguelikes are, by design, driven by a sense of tension and pressure—they’re about flying by the seat of your pants, watching the dice fall where they will and adapting to whatever situation the game and lady luck throw at you. Cult of the Lamb is a game of clever, deliberate contradictions, and the balance between cozy life sim and the fraught pressure of a roguelike is one of them. By avoiding being too punitive, at least for the first clear of each new dungeon, it creates space for tension and the exploration of random dynamics in a way that supports the more chill nature of the life sim… while also giving the option of kicking things up a notch.

There’s a similar (and similarly deliberate) contradiction in Curse of the Lamb‘s overall atmosphere and visual design. Playful animal characters with wonderfully cartoony designs and an abundance of personality and expression, sit against the serene backdrop of a clearing in the woods. The Lamb itself is a particularly cuddly-looking critter, and there’s a cute streak in the monsters you cross swords with—some of them, anyway. And alongside such endearing critters you’ll find creepy wooden monuments, occult motifs, classic dangerous cult, look out! imagery, and some truly hellish, nightmare-fuel demons—all the pieces to inspire a bout of Satanic Panic.

It’s a juxtaposition that gives Cult of the Lamb a unique sense of place, and lends itself to some wonderfully dark humour. Seeing characters that wouldn’t look too out of place in Animal Crossing feverishly worship at an altar that looks like it’s made to summon Beelzebub from the depths of an odd sight to see, to say nothing of the adorable little cheers they let out flowing a sacrificial ritual. As the leader of the cult, there are many paths to ensuring the faith of your flock, but the more sinister options take on a strangely comic tone within such a cute context. There are moments when the contrast can be more jarring, but even that feels pointed—the thematic, stylistic conflict helping to land a punchline or drive a point home.

And yes, for all its oddball charm and morbid humour, Cult of the Lamb is also a thoughtful, often scathing reflection on the nature of cults and, well, religion. Outlandish scenario aside, the search for belonging and sanctity that brings followers to your door, ready for you to support or exploit as you see fit, is a familiar one. When faith is such a valuable resource (to you), fostering it by any means necessary becomes a question of pragmatism. And hey, if food supplies are running low and you don’t want to lose the trust of your flock, just introduce a fasting ritual—what better way to turn rationing of supplies into an expression of worship? At the heart of it all, no matter how cruel or benevolent you choose to be, your followers are a means to an end, and doctrines are a question of practicality and results.

A note on performance

Cult of the Lamb isn’t exactly a demanding game, and most machines should handle it just fine. I’ve played primarily on an Alienware m15 R7 laptop with an RTX 3060 and 12th Gen Core i7-12700H—exceeding recommended specs, and easily hitting a steady 60fps with all settings maxed out (though I haven’t been able to get higher than that, even with frames unlocked and a 165Hz display, which this config can usually manage on much more intensive games).But even a much lower spec laptop—GTX 950 M with a Core i7-7700HQ—managed to keep up with Ultra settings well, with only the odd drop from a 60fps target here and there.

It’s all those carefully-balanced contradictions that make Cult of the Lamb such a compelling game. The quiet comfort of a life sim and the tension and excitement of a roguelike don’t just coexist, but enhance one another, with some brilliant gallows humour arising in the mashup of cute critters and black magic. A game about brainwashing fluffy little animals into a potentially deadly cult and going to war with demonic false prophets probably shouldn’t be quite so comforting and cozy, but here we are—Cult of the Lamb is simply, morbidly delightful.

Cult of the Lamb