At a glance, you could easily mistake Life is Strange 2 for the latest in the tired old trend of zombie apocalypse, “humans are the real walking dead” media. After all, it’s a story of two young brothers desperately trying to survive as they travel across a wasteland, where they never know if an encounter with other humans is going to end up hostile.

Related: Life is Strange: Before the Storm, a prequel to the original Life is Strange, is another excellent narrative adventure. Read our review of the first episode.

It’s a raw, honest journey through a political climate that’s become even more tense in the years since Life is Strange 2 began development, as seen through a deeply personal story—”the personal is political”, after all. It is both the story of a teenager trying to figure out how to take care of his younger brother while living rough and a commentary on the racist propaganda at the heart of the Trump campaign (and, now, of his administration). Details of the inciting incident in the first episode, Roads, are best kept under wraps, but it’s sufficient to say that Sean and Daniel, though clearly innocent to the player, become persons of interest. Between that and a couple of other concurrent events, they find themselves on the run, with the goal of travelling to their parents’ old home town in Mexico.

With little by way of supplies, the boys are forced to do what they can to get by, whether that be sleeping rough, begging, or scrounging for supplies. At the same time, Daniel is just a kid, and despite the desperation of the situation, he wants to play around and have fun. As the older brother, you have to care for him, and balance survival the need for survival with Daniel’s playful nature.

If you’re not careful, he’ll run off on his own and possibly get himself into trouble—by eating poisonous berries, for instance—but if you’re too strict, it’ll fracture the bond between the two, which wasn’t that strong to begin with. It’s this that makes the ability to call out to Daniel so crucial: he’ll mostly follow you like any other NPC companion, but you never know when he’s going to wander off, and losing sight of him can be a heart-stopping moment. Likewise, you’re a role model, and the younger boy takes notice of everything that you say and do. In one small example, if Daniel sees you stealing something—even if see that decision as justified, given the circumstances—he might be inclined to do the same later on. Developer Dontnod promises that your influence as a role model will have bigger, longer-reaching consequences as the series moves along.

With its focus on survival and life on the run, Life is Strange 2 opens its heart and relishes those quiet moments—something that the series as a whole has become known for. Your time on the road is largely focused on Sean and Daniel’s brotherhood, which brings with it bonding, friction, and plenty of low-key but heartwarming moments. At one point, you find Daniel, stick in hand, play-swordfighting with a tree, and you can choose to either join him as an ally, fight against him, or just ignore him. Elsewhere, you might teach him how to skip stones, or sit back to draw the beauty of the landscape before you.

It’s also heartbreaking, because you’re constantly reminded of the brothers’ isolation and the injustice that put them in this situation. Life is Strange 2 makes fantastic use of long camera shots to highlight how small and alone they are against an uncaring world, and they linger just long enough to let that soak in. Atmospheric music and and plenty of white space between dialogue emphasise that all the more, making these some of the most poignant moments in the game. 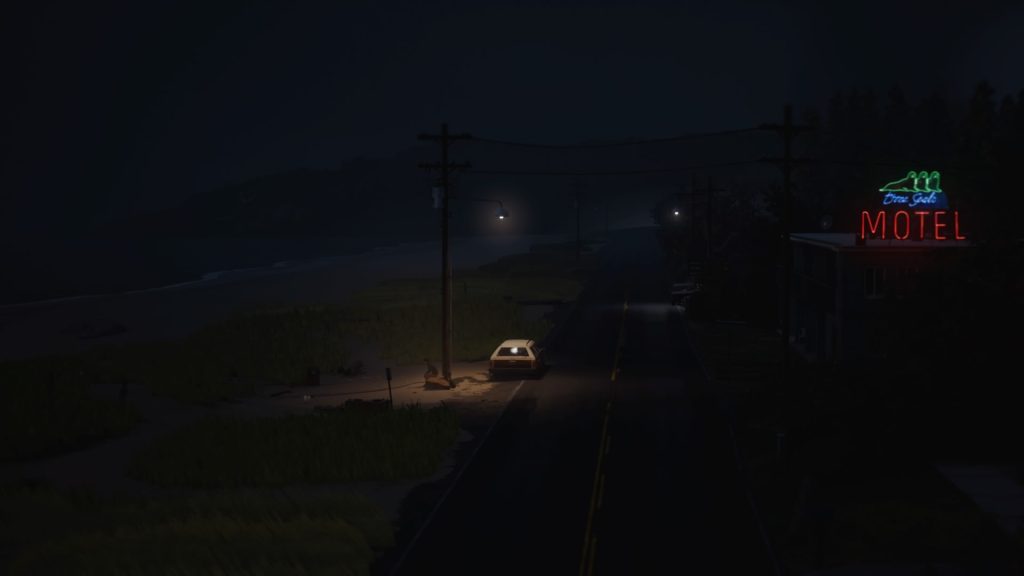 By contrast, the few encounters you have with other people are where Life is Strange 2‘s first episode is at its most intense, and where the political underpinnings really come to the fore. Travelling through “redneck country” in the Washington wilderness, you can see the suspicious eyes with which every white person looks at Sean and Daniel, whether it’s patronising faux-sympathy or unmasked disdain. In one instance, you’re met with outright hostility by a card-carrying Trump supporter who recognises the boys from the news, takes it as a given that they’re guilty, and tries to make a citizen’s arrest—”People like you are why we need to build the damn wall.”

Not everyone you meet is a racist asshole, but you never know until you get to know them, so you have to constantly keep your guard up—both as Sean Diaz, a 16-year-old on the run trying to look after his kid brother, and as Sean Diaz, a Mexican-American kid who’s mere existence is treated by many as a hostile action. Not everyone is a racist asshole, but for your survival, you have to assume that they are until they convince you otherwise.

Related: Over at Paste, Natalie Flores writes about how Life is Strange 2 humanizes Latinx people in a way no other game has done before. It’s essential reading.

It’s raw, it’s uncompromising, and it’s what Latinx people have the deal with all the time. As a white dude from New Zealand, I can’t speak to the authenticity of Life is Strange 2‘s depictions of racial hostility, but at least comes across as being handled with care. It’s depiction for the sake of commentary, rather than sensationalised exploitation, and the people at the core are given enough character that they aren’t reduced to being defined by their race—it’s part of who they are, and an important part, but it’s not their entire being. Which brings me back to the opening chapter, before the incident, and when you get to see Sean and Daniel just being their own, regular selves. Sean spends most of his time hanging with his best friend, Layla—and how refreshing it is to see kids of different genders just being friends, without any hint of romantic subtext!—skateboarding, drawing, and trying to figure out what to text to his crush. He sometimes gets into trouble, but no more than any other kid.

Daniel is just a regular, excitable nine-year-old who loves chocolate and gets understandably annoyed with the way his big brother teases him. There’s is a regular household, with a regular father who works a regular job and cares for his kids. Their neighbour’s a racist dick—because racism is normalcy in America—but life for the Diazes is just a normal life, until it’s not.

That concept of normalcy is something that Life is Strange 2 keeps coming back to. The notion of kids being on the run, living rough, and dealing with a growing racist fervour is something that should be completely outlandish, yet the game’s depiction of society is completely grounded in realism. (There’s a supernatural element, but that doesn’t become apparent until the end of the first episode.) It looks and feels like a Walking Dead game, but the scourge here isn’t zombies; it’s a presidential candidate running on a platform of racism and hate. 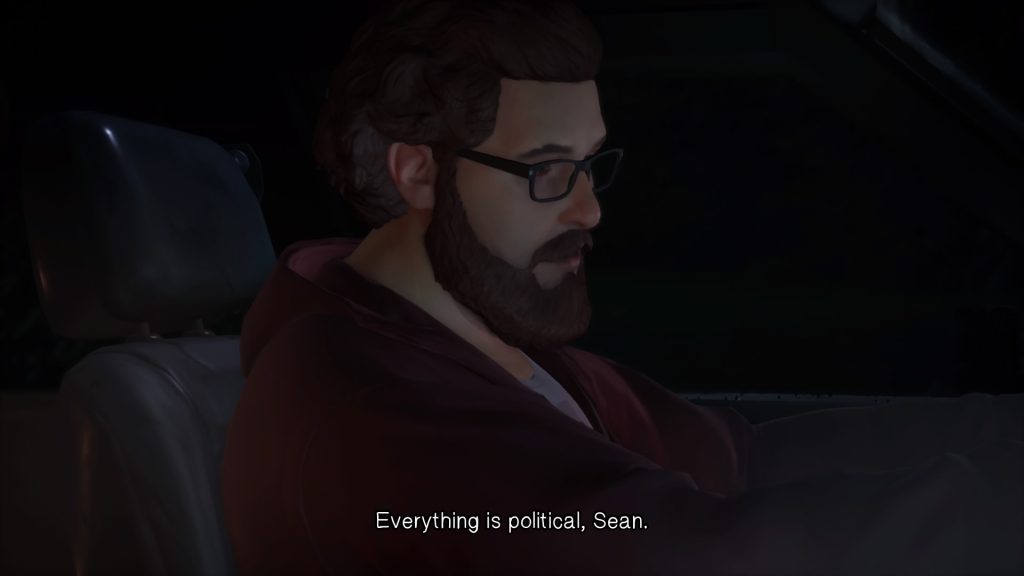 This isn’t conjecture on my part; with Life is Strange 2, the people at Dontnod have something to say, and they say it loud and clear. In a time when so many publishers are cagey about the political context of their games, it’s refreshing to see something with big publisher backing speaking so firmly. I can only assume the commentary will get more pointed as the series moves along—Roads takes place in late October 2016, towards the end of the election campaign, but Life is Strange 2 as a whole is set to span a full year, so it’ll inevitably get into the early days of a Trump presidency.

We’re only one episode in, but Life is Strange 2 is already shaping up to be a very good game, one that hits all the emotional highs and lows we’ve come to expect from Dontnod. But more than that, with its commentary on present-day America, it’s shaping up to be one of the most important games of a generation.