Francisco González has a way of building worlds that are at once familiar and unlike anything you’ve ever seen before. Whether it’s the 1920s Miami of A Golden Wake or the post-apocalyptic dystopia of Shardlight, González creates worlds that could easily be cliche in the hands of a less-skilled writer, and breathes enough life into them that they feel brand new.

Lamplight City similarly approaches a well-worn setting and premise, this time a drug-addicted private detective whose obsession with work is putting strain on his marriage, in a fictitious take on 19th century New York. And, once again, the attention to detail, quality of writing, and atmosphere turn what could be painfully derivative into something fascinating.

At the centre of Lamplight City is Miles Fordham, a former police detective turned private eye. After his partner, Bill Leger, was killed on the job, he quit the force, took a liking to soporifics, and undertook his new profession—in part so that he might track down Bill’s killer. But being dead hasn’t stopped Bill from being exactly the sort of friend and partner Miles needs—now more than ever. Bill’s ghostly, disembodied voice haunts Miles’ every waking moment. Miles would never admit it, because he sees the spirit as nothing more than a nuisance who haunts his every waking moment, but it’s Bill who holds Miles together. His constant wise-cracking lightens the mood as he helps to solve cases. He’s an emotional support for man who’s closed himself off to the living people around him. He calls Miles out on his bullshit, too, which is something that takes a true friend.

Unfortunately, the case of Bill’s murder went cold long ago. Miles is left taking on cases the police can’t handle as a way to occupy his mind and, hopefully, find some sort of new lead. This sets up the basic structure of Lamplight City: each chapter is a new case, and it’s up to you to put your detective’s eye to work in the hopes of solving. You’ll look for clues, discern useful information from red herrings, and question suspects and witnesses.

Playing as Miles, your investigations take you all over New Bretagne, and it’s a city overflowing with character. The little details, like the choice of artworks rich people choose to hang in their homes or decrepit signs you see in poor neighbourhoods piece together to build a world that’s alive. Each borough feels like it has a thousand stories to tell. All of those stories—as well as the handful of them that Lamplight City lets you witness—would come back to the division that seems to define New Bretagne. There’s a sharp line between the rich and the poor in this city. Racial segregation is rife, and there are strict limitations on what women can do and where they can go. Queer people are swept under the rug, and sex workers are publicly scorned by the same people who quietly call on them at night.

All of those stories come back to the division that seems to define New Bretagne.

These aren’t used exploitatively uses for “flavour”, either; class conflict, racism, sexism, homophobia, and the marginalisation of sex workers are all things that Lamplight City makes a point of challenging at every turn, whether it’s through Miles and his heavily frowned-upon interracial marriage, Bill’s refusal to be another buried gay, or the myriad of marginalised characters you meet during your investigations who are treated with dignity and humanity—both by Miles and by the game itself. In a world where people still cling to the bizarre notion that games should (or even could) be apolitical, it’s nice to play something that explores such topics so boldly, and with so much nuance. 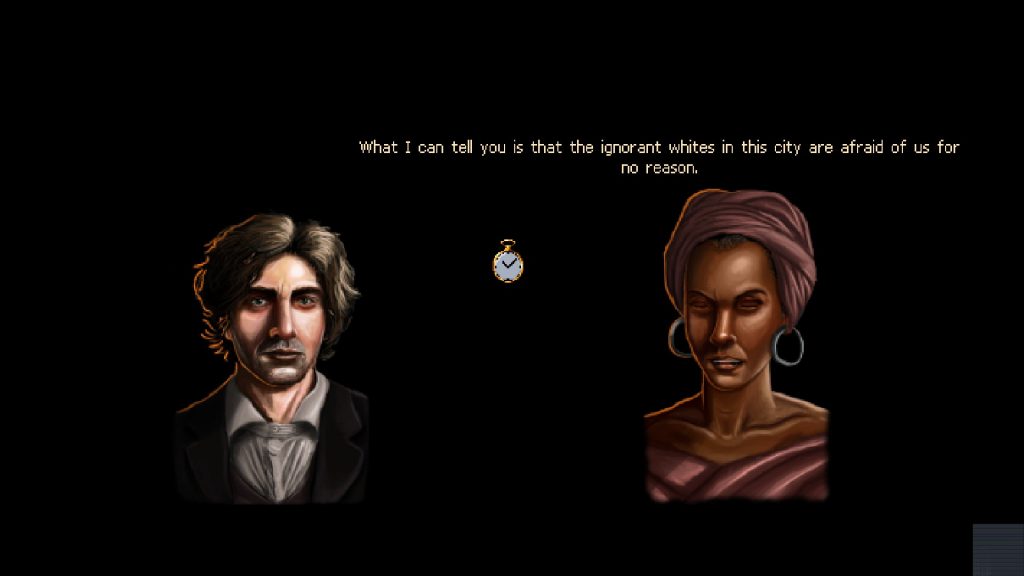 Lamplight City‘s other great strength is how willing it is to let you “fail” your investigations. Detective-themed games are usually tied tightly to a set of rails; there are plenty of puzzles and investigation elements to work through, but unless you stop playing entirely, you’ll eventually solve the case because the story depends on it.

That’s generally not the case with Lamplight City. Each case has a number of different outcomes; if all goes well, you’ll figure out the truth, but you might also arrest the wrong person or find yourself with no option but an inconclusive resolution. That all depends on how you play your detective role—who you talk to and what you say to them, what clues you find or overlook, and so on. You’ll never reach a fail state in a video game sense—it’s always possible to at least get the worst outcome and keep the main story moving—but it’s very possible, and even likely, that you’ll fail to truly solve some of the cases before you. By creating a framework to let that happen, Lamplight City makes its detective work feel like actual detective work. It’s actually quite difficult to get the best outcomes from each case, and it can be tempting to just give in, accept a sub-optimal outcome, and move on. It’s frustrating to watch a case go cold in front of you, but not in the way that getting stuck in a game usually is. You can’t just try and retry until you beat a tricky boss or level, and you have to carry your failures with you.

Or, that’s true for the most. There were a few times I got completely stumped, even on the route to the worst outcome, because I’d missed some key clue or another, and I had to resort to trial-and-error to get things moving again. In at least one instance, the best ending was right before me, but I couldn’t get it because a key clue was hidden in a piece of dialogue that I couldn’t repeat and, unlike every other verbal clue up to that point, it wasn’t recorded in my case notes. I could see what I needed to do and how to do it—it involved matching musical notes to a mnemonic uttered by a suspect—but a sudden change in how the rules of the game worked meant the clue was lost forever. Those sorts of issues are rare, though; for the most part, Lamplight City makes its cases complex, involved, and satisfying, without falling back on tired old means of injecting challenge into its puzzles. That then feeds into the sense of place and atmosphere that the game builds so well, and allows you to get lost in a story with a lot to say and a compelling way of saying it. Lamplight City is a game that deserves your attention.