I’m one of the few people in the world who wasn’t taken with Horizon Zero Dawn. It’s an incredible technical achievement and a game with a fascinating premise, but for me, none of the story, characters, or game systems really lived up to that potential. I’d hoped that a big new would be a chance for Horizon to push the envelope a bit more, and tell a tale worthy of the meticulous detail that’s gone into building the game’s world.

Sadly, The Frozen Wilds is more of the same, to the point that the story feels like a truncated retread of that of the main game. The expansion adds a large new area to explore, and it’s every bit as beautiful as the original game, but it’s full of the same sort of banal side quests and open-world bloat. Very little about this expansion feels new; rather, it feels like another checklist of Things To Do in a game that already struggled from a lack of focus.

Related reading: My review of the original Horizon Zero Dawn, which was a beautiful game that tried to do too much.

The Frozen Wilds sees Aloy sent to the harsh, wintry tundras that the Banuk people call their home, to investigate reports of machines gone berserk. According to the Banuk, it’s the work of a “Daemon” living within a mountain called Thunder Drum. Despite their best efforts, the clan’s warriors have been unable to take this Daemon out.

Aloy’s own investigations lead her to a Banuk shaman by name of Ourea. She’s been living in isolation in an effort to commune with a spirit called… well, “The Spirit”, which has been quiet for some time. Aloy’s appearance is enough to reawaken the Spirit, renewing Ourea’s faith and prompting the pair to journey to Thunder’s Drum and put a stop to the Daemon once and for all. 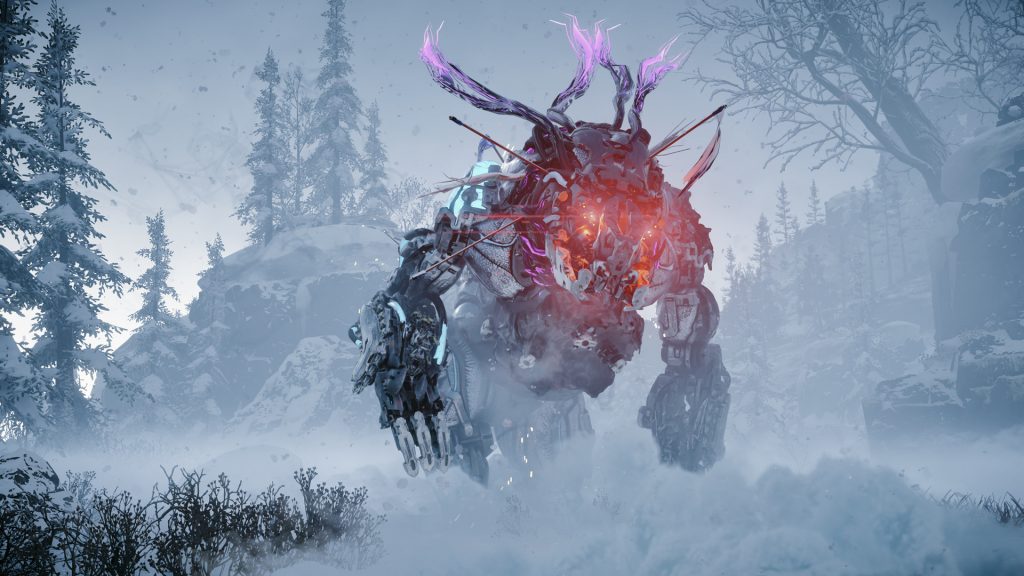 You can probably guess what the Daemon and the Spirit actually are, especially if you’ve played Horizon Zero Dawn to its conclusion, and The Frozen Wilds never steers away from those assumptions. With its “twists” being more of a fizzle than a bang, the story falls on its characters, who are incredibly one-dimensional. The only major characters, aside from Aloy, are a stoic chieftain who doesn’t like outsiders, and the wise shaman whose knowledge leads the way to victory. Neither seems to have more personality beyond a brief character outline, with little to make them relatable or interesting; as a result the expansion’s attempts at creating emotionally-resonant moments fall flat.

Despite criticism for the way the original game handled “tribal” imagery and messaging, The Frozen Wilds doubles down on this with the Banuk. They’re a very spiritual and ritualistic people, but that manifests in a blatant appropriation of Native culture in everything from styles of dress to a sort of off-brand “rain dance” that a couple of shamans use to open a sealed door to Thunder’s Drum. There are ceremonial hunting challenges, rock art and totem poles adorn the occupied parts of the landscape, and Banuk people were strange headdresses made of machine parts.

Read Dia Lucina’s piece on how Horizon Zero Dawn—and most game reviewers—failed when it comes to Native culture.

It’s a very crude pastiche of Native imagery and motifs, immediately recognisable but divorced from any sense of authenticity. It almost comes across as a parody of the way Horizon Zero Dawn‘s own troubling approach to “tribal” cultures, but The Frozen Wilds is so serious and lacking in self-awareness in its storytelling that it comes across as an even more misguided attempt to envision a “return to tribal life”. 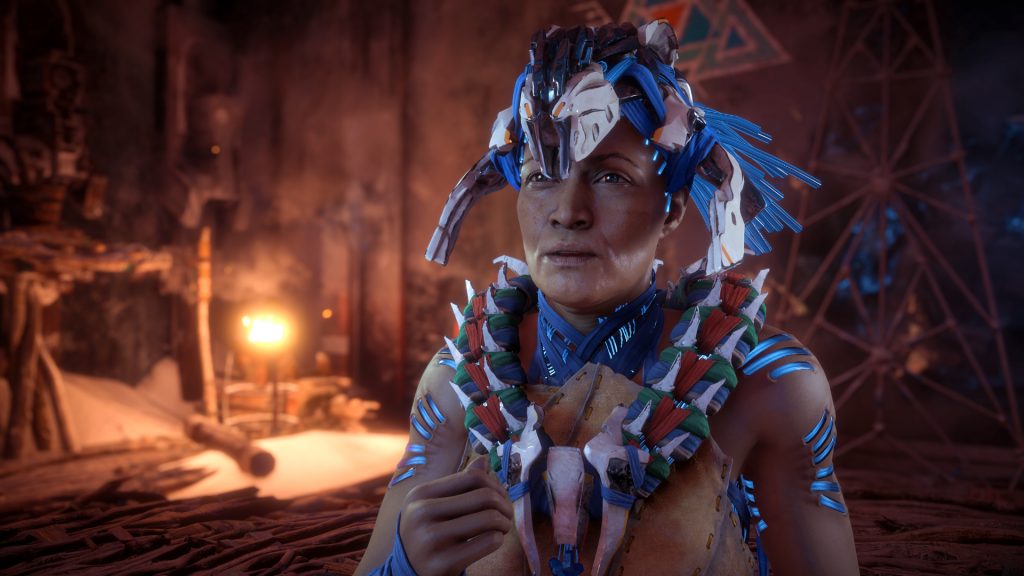 The Frozen Wilds does little to change up the gameplay of Horizon Zero Dawn, for better or worse. There are a couple of new machines, based on wolves and bears, but fighting them generally involves the same strategies as any other machine in the game: shoot weak points with your weapon of choice, using the ropecaster or tripwires to limit the machine’s movement as you see fit. There are a couple of new weapons, including a flamethrower and a sort of make-shift rifle, but I found both gimmicky and less reliably than the trusty hunter bow. The new machines and weapons are as impressive in their design as any other, but after many dozens of hours spent fighting other machines with the same tactics, the fights themselves left me wishing there was more to them.

Likewise, the side-quests all fall into the same forgettable assortment of fetch-quests, bandit camps, and collecting things. There’s a lot to do in The Frozen Wilds if you’re inclined to get 100% completion, but the tasks themselves are just that—tasks on a checklist, a list of jobs to be done so you can get to other jobs, rather than being something intrinsically enjoyable or memorable in their own right.

I will say, though, that The Frozen Wilds looks stunning. Horizon had its share of snowy locales, but the expansion goes all in on a wintry wonderland, with deep snowdrifts to trek through, icy mountains to climb, and a few prismatic geothermal hot pools. Finding “relics” of the Old People is still a joy—the Old People being the modern-day people of the real world, and these relics being things like action figures and animal toys. There’s even a new snow angel emote, making what was already the best photo mode ever made even better. 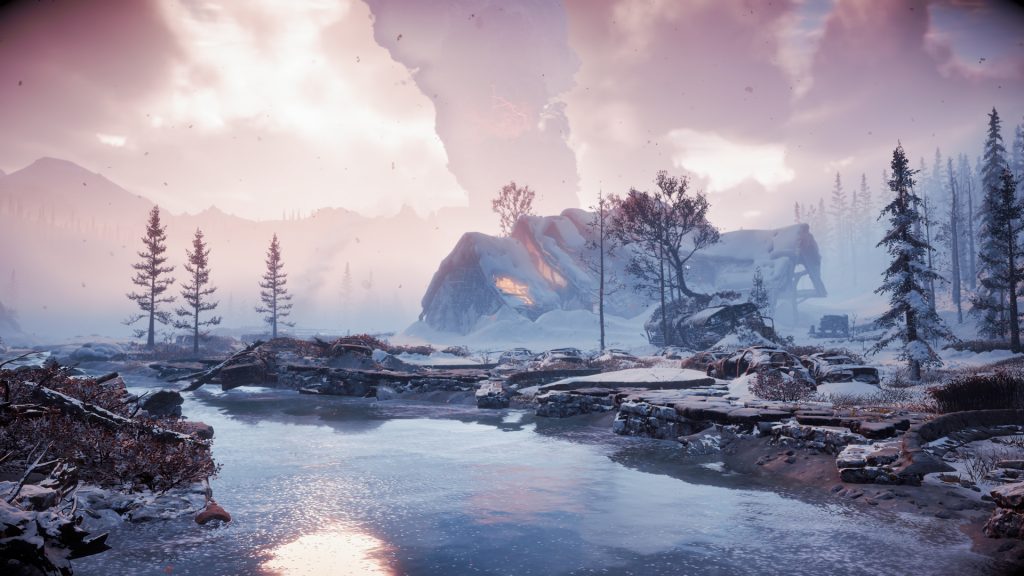 Still, I wanted more from The Frozen Wilds, just like I wanted more from Horizon Zero Dawn. The whole “post-post-apocalypse” premise is a fascinating one rife with stories to be told, and the folks at Guerrilla Games have done a great job of bringing that vision of the world to life. But everything within it, from the story and characters to the combat mechanics and quest design, feels shallow and lacking. I was hoping that this expansion would build on that; instead, it delivers more of the same.