Life is Strange: Before the Storm Episode 2 review: Such stuff as dreams

For me, one of the most remarkable things about Life is Strange was its ability to capture the beauty of small moments. For all its philosophical underpinnings and clever twists on the time travel premise, it was those little in between moments that really resonated with me. I’m not just talking about the scripted “rest” moments, where you could sit Max down somewhere, set the controller down, and take in the scenery and music as the camera panned around the scene. Even aside from those, Life is Strange was full of slice-of-life downtime, where you’d be idling about, talking to Max’s classmates, and generally just being there in the moment.

Life is Strange: Before the Storm is game built almost entirely on those little moments; this is more apparent than ever in its second episode, Brave New World. With no Max and no time travel, it’s necessarily without that fantasy element, but even the more “realistic” action is kept to a minimum. There’s only one scene, really, that stands out as the more adrenaline-fueled intensity of dramatic fiction; the rest of the episode is just everyday life and everyday problems. I love it for that.

Brave New World picks up more or less where the first episode left off, with Chloe Price and Rachel Amber in the principal’s office after being caught cutting class. Given Chloe’s reputation, Principal Wells assumes that she’s to blame, and that she dragged model student Rachel down with her. Rachel tries to take the blame, an action you can go along with or deny; regardless, Chloe gets suspended from school and Rachel gets stripped of her starring role in the school’s production of The Tempest. The rest of the episode is pretty much just the two girls dealing with what happened, each in her own way. Chloe lashes out and runs away from home—a move at least partly inspired by her mother’s choosing now, of all times, to tell Chloe that her jerk of a boyfriend is moving in. Rachel bottles everything up, and pretends nothing is wrong.

It’s dramatic, but by human standards, not those of a typical video game. One scene sees Chloe roped into helping her dealer Frank collect a debt, which goes about as well as you’d expect, but the rest of the episode is basically just a day in the life of a runaway Chloe. You start fixing up a beat-up old truck in the scrapyard and decorating Chloe’s new hideaway; you talk to friends, with interactions that vary depending on your past decisions, like whether you played Dungeons and Dragons with Steph and Mikey; you get pulled into playing a part in the school play, and if all things go well, you get to have a special moment with Rachel onstage. It’s simple, beautiful, heartfelt slice-of-life magic.

There is, of course, a deeper undercurrent running through all of this. Like Life is Strange, determinism plays a big role; the whole story is about two teenagers who feel trapped on a certain path in life, as determined by their small-town upbringing and familial expectations, and they want nothing more than to break free of that and carve their own way. Even without the conceit of time travel, Before the Storm is fundamentally about a conflict between free will and determinism. 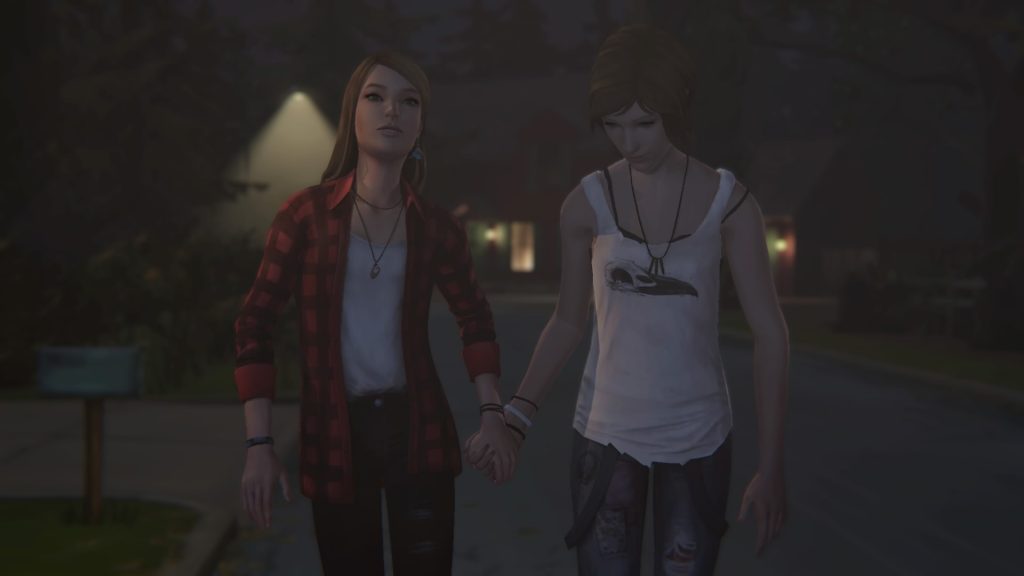 Before the Storm is also about performance, not just in a theatrical sense but in a psychological one. Rachel, in particular, is a character who goes to great lengths to hide her “real” self and live up to the expectations of her high-society parents. Rachel the Model Student is a performance, a persona.

Chloe, too, is playing a character—Chloe the Sarcastic Rebel. In her case the longer between performance and reality is more blurred; there’s a kernel of truth in the rebellious Chloe that everyone else sees, but there’s also an element of her playing up to her reputation.When we see Chloe alone, she’s a smart, kind, thoughtful individual, even if that’s laced with sarcasm. When she’s with Rachel, Chloe’s this awkward, shy kid.

Before the Storm is also about performance, not just in a theatrical sense but in a psychological one.

On another level, Before the Storm is about the player’s performance as Chloe, and their own expectations of who she “should” be. Even within the confines of a pre-defined character, the game gives players a lot of room to personalise their take on Chloe. Often it’s through dialogue options, sometimes through the game’s “argument battles”, and occasionally through your choices about who to interact with (or ignore) in a given scene. And, if course, it’s in what you do in the “downtime”—those small, quiet moments that give you a chance to reflect, to think, to soak in the ambience. Such choices aren’t so much about consequences in a literal narrative sense (though there are those as well) but about which version of the “Chloe” mask each player chooses to craft and wear. In that sense, Life is Strange isn’t just a story about two teens struggling through adolescence, but a way for players to explore their own self as reflected in Chloe. This is true of any choice-and-consequence game, but in the case of Before the Storm it’s tied to a central theme of the game.

For all these reasons, I find myself liking Before the Storm fast more than I did the original Life is Strange. Part of that also comes down to the fact that that I find Chloe to be a far more relatable, believable protagonist than I ever did Max, and part if that is the new game’s much more natural dialogue.

But most of all, I’m loving Before the Storm for its insightful and grounded exploration of teenage-hood—of the feeling of being trapped and wanting to live free, without a mask between yourself and the world.

Life is Strange: Before the Storm is developed by Deck Nine and published by Square Enix. The first two episodes (of three) are available now for PlayStation 4 (reviewed), Xbox One, and PC.