Hi! Welcome to the first episode of Now Reading, something I plan to be a semi-regular feature on Shindig where I take a quick look at what I’ve been reading lately (comics, mostly).  These aren’t full-on, serious reviews – just quick thoughts and first impressions about what I’ve been up to.

So, without further ado, here’s the inaugural Now Reading! 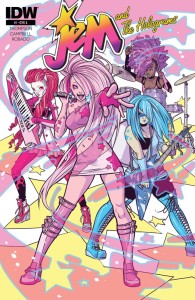 I’ve never watched the original Jem cartoon, so I can’t comment on how Jem and the Holograms (2015) compares to that. What I can say, though, is that this newish (issue #6 comes out next week) series is stunning – probably my favourite book right now.

Within the lovably silly premise of an up-and-coming band whose lead singer is a hologram, the creative team have crafted something really special, a story that’s as joyful and heartwarming as it is funny ludicrous.

Between Thompson’s stellar writing, Campbell’s gorgeous and wonderfully diverse, inclusive character designs, and Robado’s bright, vivacious colours, it’s hard not to fall in love with Jem, the rest of the holograms (who, ironically, aren’t holograms – something not lost on them), and even their angry, almost caricaturistic rivals, The Misfits. Jem and the Holograms is the antithesis of the “gritty”, grimdark comic – it’s pure, unadulterated joy in comic book form, and something everyone should be reading. 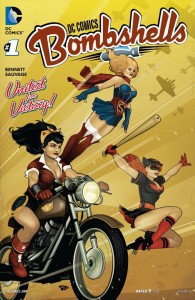 I really love alternate takes on established heroes, and DC’s Bombshells statue range are among the best, combining a gorgeous, pin-up girl aesthetic with a wonderful sense of empowerment. DC Comics Bombshells is a digital-first comic series based on those statues, and it does a great job of capturing that spirit.

The first four issues have very much been about setup, gathering all the Bombshells together into an all-woman force of superheroes to go out and turn the tide of the war. That hasn’t made them any less exciting, especially the Batwoman-centric first issue. 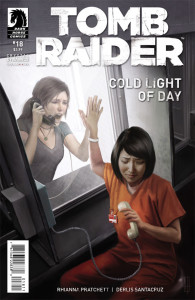 Sadly, Tomb Raider #18 brings a close to Dark Horse’s current Tomb Raider series, leaving us hanging until the Rise of the Tomb Raider game comes out in November. Issue 18 wraps up the the current arc nicely, but leaves enough open threads that the wait for Rise is going to be rough.

I’m also going to miss Pratchett’s writing dearly. She has a really great handle on this iteration of Lara Croft (she did help create her, after all!), and her ability to balance high-stakes action with deep, intimate sense of emotion, especially within the confines of is remarkable.

I do wonder about recent comments from game director Brian Horton, who rejected the notion that Lara is suffering from PTSD in Rise. This has been an important theme throughout the comics, and the first trailer for Rise suggested that the same would be true there. It’d be a wasted opportunity if they just cast this aside. 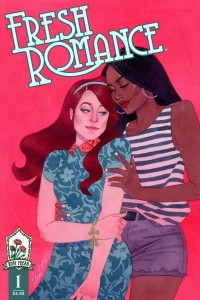 Fresh Romance #1 is something I bought on a whim, taken in by Kevin Wada’s beautiful cover art and the recommendations of a friend (@thelightisred, on Twitter). I don’t read a whole lot of romance (though it’s definitely growing on me, lately), so Fresh Romance is a really welcome change of pace.

School Spirit (Kate Leth, Arielle Jovellanos, Amanda Scurti), the first of three independent stories, is my favourite, I think. It’s a high school romantic comedy about an adorable queer couple, Malie and Justine, who pretend to be chasing after the same guy in order to keep their love a secret. It’s funny, endearing, and just a tad bittersweet – exactly what you want from a romcom.

I’m less of a fan of Ruined (Sarah Vaughn, Sarah Winifred Searle), but that’s more to do with personal taste than anything else. There’s certainly a market for Jane Austen-esque period pieces, but I prefer my historical romances to be filled with hairy highlanders.

Finally, there’s The Ruby Equation (Sarah Kuhn, Sally Jane, Thompson, Savanna Ganucheau), another romantic comedy, but one that doesn’t have a cute couple at its core. Instead, it centres on Ruby, a magical barista who’s trying to reach her matchmaking quota so that she can go “back to the homeworld, bitches!” It’s a neat approach to romance, and I’m really digging it.

So, that’s what I’ve been reading, and I’d certainly recommend all of the above. What comics have you been keeping up with? Let me know in the comments!