A Red Woman is a powerful, important comic about domestic abuse 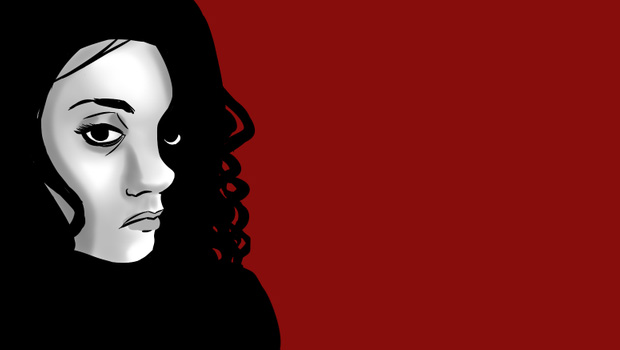 Talking about domestic violence is difficult. Even in 2015, there’s a pervasive attitude that the affairs of the home are just that, and have no right to be discussed in public. And when they are, it’s so often with an individualistic attitude – that abusers are individual people, and that their crimes are their own and are linked to others only by circumstance.

But this isn’t the case. That second-wave feminist mantra – the personal is political – rings as true as ever. Domestic abuse is perpetuated by a society that deems it acceptable, that refuses to talk about it at all, let alone talk about the systematic underpinnings that enable it.

This is why we need to talk about it.

Enter A Red Woman, a powerful, haunting, and oh-so-important comic from Kiva Bay. In her own words, “A Red Woman is a collection of stories, mine and other men and women, of the struggle to escape abuse to help me understand why I stayed. Raising awareness and creating an environment where people feel safe coming out about their abuse and seeking help is the goal.”

It’s a difficult, confronting read, but I think everyone who’s able to should give it a look.

Case 1 “Alice” I noticed a trend of shyness in my survivors. Many of us were shy when our abusers found us CW abuse pic.twitter.com/tn5Y1MpewL

If you want to support Kiva’s work, you can do so by contributing to her Patreon. Alternatively, consider donating to support services like The National Domestic Violence Hotline (USA), Women’s Refuge New Zealand, or similar organisations in your area.

A Red Woman first appeared on kivabay.com, and is reposted here with the permission of its creator, Kiva Bay.

The Kids We Were (Switch)