Despite what you’ve probably heard from a lot of folks on the Internet, and despite Sony apparently having all but given up on it, the PlayStation Vita is a really great handheld with an awesome library. With the likes of Danganronpa, Persona 4 Golden, Tearaway, OlliOlli, and Killzone: Mercenary (which I’ve not played, but have heard good things), among plenty of others, the Vita has great games to suit all tastes – and that’s before you add the swathes of Vita-compatible PSP games.

Just shy of a year ago, the Vita’s already-strong library jumped to new heights with the launch of Futurlab’s Velocity 2X. It came out on PS4 at the same time, and as of this week is available on Xbox One and PC as well, but Vita is where Velocity 2X is at its best, thanks largely to intuitive touchscreen controls that aren’t present on other platforms.

I’ve been playing 2X again lately (as well as its predecessor, Velocity Ultra), and it’s as good as ever. Nothing that’s come out since has been able to knock it off its throne – not Danganronpa 2, not Final Fantasy X | X-2 HD Remaster, not even Hatoful Boyfriend. At the centre of 2X is the same deceptively simple idea as Ultra: it’s a vertical scrolling shoot-’em-up, but with an exploration brought about by the ability to teleport. You can jump anywhere on the screen by simply tapping where you want to go, while the “long form teleport” lets you place checkpoints that you can return to at a whim.

This was all true of Ultra, of course, but 2X goes one further with the addition of platformer sections. At certain points in most levels, you’ll need to dock your spaceship and run through what are almost like bite-sized takes on Metroid. Lt. Kai Tana, the game’s hero, can make use of those same short- and long-form teleports on foot, bringing that same sense of exploration – and it translates to these side-scrolling parts really well.

This would all be for nought without great level design, but 2X’s layouts push the teleport mechanics to their limits. In most levels, progress is gated by laser fields that you need to deactivate by shooting switches. Sometimes, one switch is all it takes, but often there’ll be quite a few that need to be shot in order. On the more linear levels that emphasise speed or combat, these are usually laid out in a fairly straightforward fashion, but the exploration-focused Search and Rescue missions have you zapping all over the place as you navigate complex networks of laser fields and switches. You’ll often be working through two, three, even four series’ of switches at once, and untangling the threads that tie them together is incredibly satisfying. 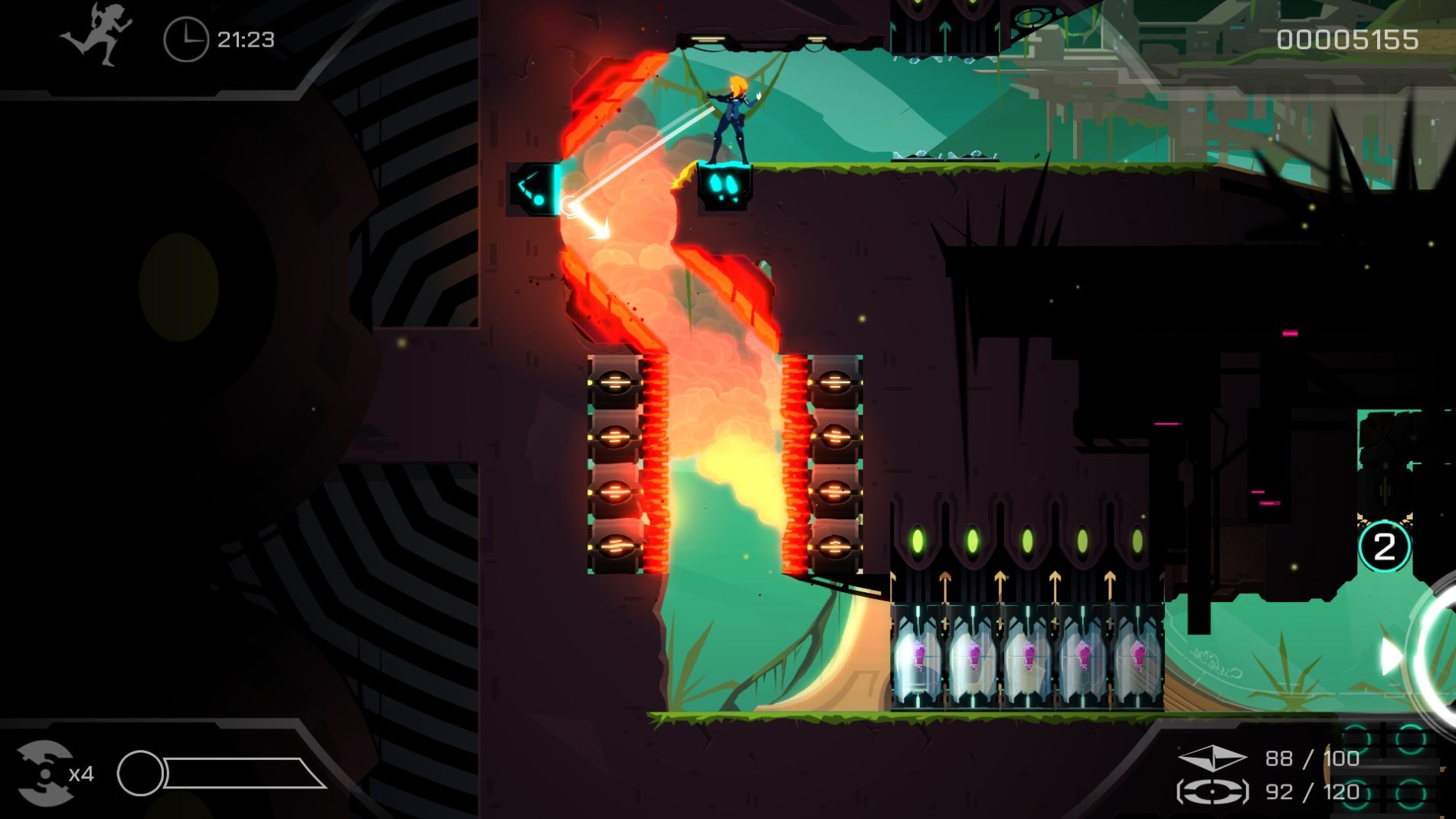 This is even truer when it comes to trying to get a perfect score on each level. I’m not normally one for high scores and speedruns. But the way everything in both Ultra and 2X comes together as you try and beat the gold medal time limit (while also collecting and killing everything there is to collect and kill) is remarkable. Figuring out when to teleport and where, when to use your speed boost (which is unlimited) and when to take it slow, and the most efficient routes is enthralling. Flawless controls, relatively short levels, and quick reloads gives means this process rarely frustrating, if ever; “just one more try!” he said, for the 500th time.

This is where 2X’s Vita version, specifically, shines. It’s a fantastic game on other platforms, of course, but you’re limited to use buttons for short-form teleports: hold Square, move a (very responsive) crosshair to where you want to go, then let go to jump. This works just fine, but on Vita, you also have the option of tapping the touchscreen. I actually use both methods, depending on the situation; buttons for very short jumps straight up, down, left, or right, and touchscreen for longer jumps, or those where more precision is required. 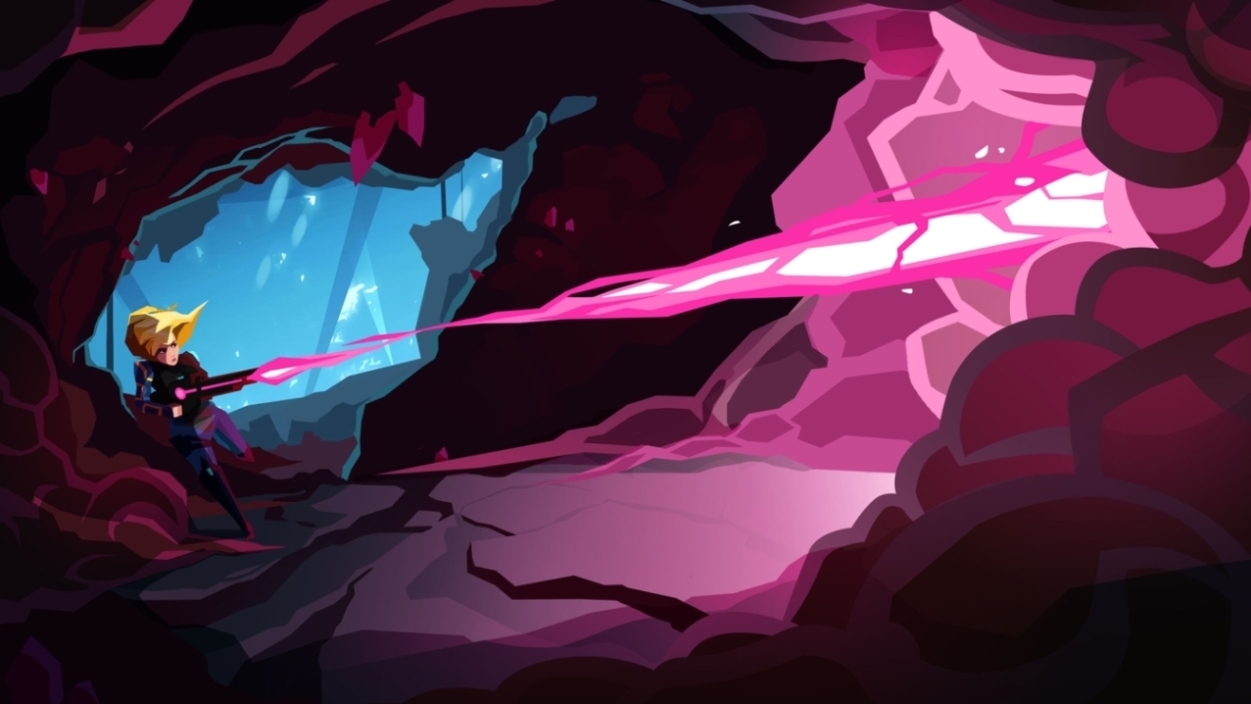 All of this is wrapped up in an entertaining story and absolutely gorgeous art. Ultra’s story was interesting enough, but very focused on the “science” part of “science fiction”; 2X is a much more character-driven affair, all centered around the certified badass that is Lt. Kai. Even in the game’s short, visual novel-style cutscenes, Kai shows so much personality – she’s sassy, charismatic, funny, sweet, determined, and not at all phased at the prospect of taking on an entire race of hostile aliens. The colourful, stylized artwork supports this characterisation perfectly, and Kai’s new cyborg-like design is even cooler than her Ultra look.

Ultimately, the plot is there to frame the gameplay, but it does a great job of adding a sense of weight and meaning to your actions, and connecting you to the character you see on screen. It reminds me a lot of Star Wars: A New Hope, but if Leia, Luke, and Han were all rolled into one character, and then an extra dose of kickass added to the formula.

Simply put, Velocity 2X (and Velocity Ultra, for that matter) is a game that you need to play. If you have a Vita, it should be in prime position on your dashboard, and even if you don’t, it’s more than worth checking out on the other platforms.

The game was obtained by the reviewer through PlayStation Plus.