Update 28 April 2017: Even almost two years since posting it, this article still seems to get a lot of traffic. Since then, the English version of Fire Emblem Fates has come out, and it improves on some stuff, but also falls flat in other ways. I just want to clarify that all this was written based on the Japanese version, prior to the Western release.

This post deals with homophobia and gay conversion therapy, and as such comes with a strong trigger warning.

Last week, Nintendo confirmed that the upcoming strategy role-playing game Fire Emblem Fates would include same-sex marriage. It’ll be the first time that the 25 year old series will allow same sex characters to marry, despite love and marriage systems featuring as far back as 1996’s Fire Emblem: Genealogy of the Holy War. It’ll be the first Nintendo-published game at all to have same-sex marriage, and marks a dramatic about-face from the company’s dismissive comments about criticism of the lack of such on Tomodachi Life.

“We believe that our gameplay experiences should reflect the diversity of the communities in which we operate and, at the same time, we will always design the game specifications of each title by considering a variety of factors, such as the game’s scenario and the nature of the game play,” Nintendo said. “In the end of course, the game should be fun to play. We feel that Fire Emblem Fates is indeed enjoyable to play and we hope fans like the game.”

But is it as dramatic a move as it seems, at first glance? Plenty of people have been praising Nintendo for this move, but others have – rightfully, I think – criticised it as being something of a backhanded compliment; as Nintendo doing the absolute bare minimum to avoid controversy, and once again throwing queer folk under the bus in the process. Yes, same-sex marriages  are in the game, but the ridiculous caveats accompanying them and shitty representation only serve to undermine any sense of progression.

Choose one: gay or lesbian

Fire Emblem Fates is divided into two versions, which are sold separately, called Conquest and Birthright; each of these tells the game’s story from the perspective of one of the two warring factions. The alternate path will be available as DLC, as will be a third “neutral” path. This sounds great! Especially for a series like Fire Emblem, that typically presents a nuanced, complicated exploration of themes of war. 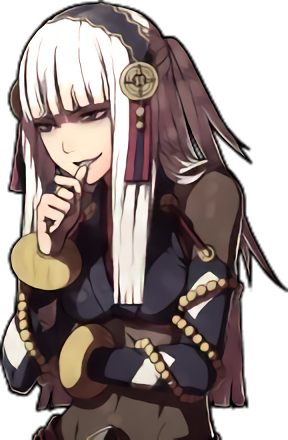 It’s great, except that your queer romance options are limited by which version you buy. Conquest has a male character called Zero, who can marry the player’s character (Kamui) regardless of chosen gender; in Birthright, there’s a woman called Syalla who can likewise do the same.

If you want your character to be a lesbian, but the Conquest storyline interests you more – tough luck. The third path will have both Zero and Shara, but (a) you have to shell out extra for it, and (b) it still doesn’t address the heart of the matter. In a game that will have tens of available party members (the previous game, Fire Emblem Awakening, had over 40 characters to recruit), there is a single queer romance option per version. (There is another lesbian character, but she cannot marry female characters, for really gross, disturbing reasons that I’ll get into below.) Trans characters? I haven’t heard anything, which – given the context – I’ll take to as a likely indicator that they don’t exist at all in this game.

For all Nintendo’s talk about gameplay experiences that “reflect the diversity of the communities in which we operate”, this really the most minimalistic approach to representation they could have taken. One character per game.

Before anyone starts talking about how only “2% of people are gay” or whatever figure you want to use – those figures are both flawed (because of the difficulty of getting accurate numbers, even with anonymous self-report data), and irrelevant. Representation doesn’t mean proportional representation; it’s about visibility and awareness for marginalised groups of people in media, not mirroring real-life figures as closely as possible.

The framing of queer people as psychopaths

Remember how every queer person you’ve ever met was psychotic? No? Well in Fire Emblem Fates, they are. Zero is, according to his official character description, “incredibly sadistic and loves watching people suffer.” Syalla, meanwhile, is “goes so far as to stalk those she believes may be compatible with her.” (At least Soleil, the aforementioned lesbian woman, isn’t quite so psychotic.) 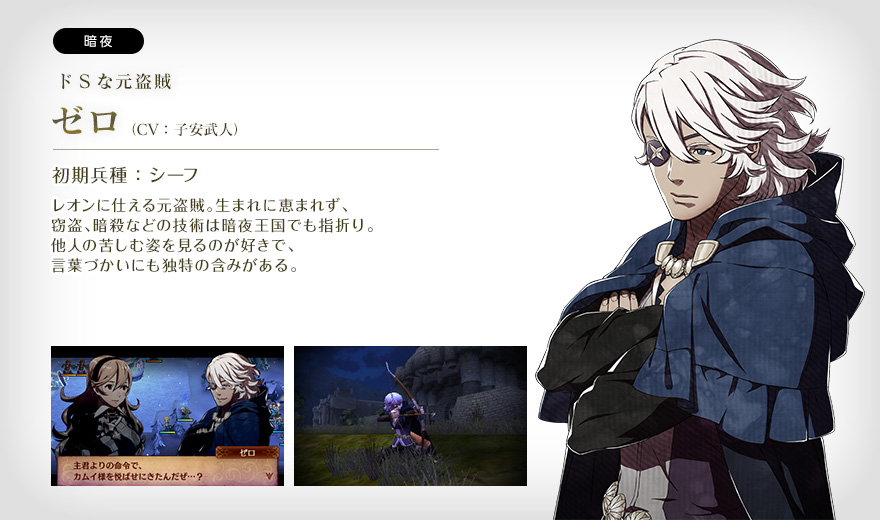 What does it say when two of three queer characters are so villainous? Especially considering the real world context, in which homophobia is rife, homosexuality was considered a mental illness not all that long ago, and the idea that queer people are deviants is still very pervasive. This framing – intentionally or not – upholds those bigoted perspectives.

Now, one of the strengths of Fire Emblem is how diverse the rosters are in terms of personality. It’s only fitting that there should be characters like the above. Were there more queer characters in the game, it wouldn’t be a big deal if one or two of them had personalities like Zero and Syalla. But when they’re the majority queer characters, it just reinforces really harmful stereotypes. It’d be like making the only Black character in a game a criminal.

Andrea Ritsu on Tumblr has done a far more eloquent job of dissecting this than I ever could, so rather than simply paraphrase her, I’ll let her words speak for themselves:

So, there’s a female character named Soleil in Fire Emblem Fates. She is a lesbian, that is her actual canon character trait. She speaks about being attracted to girls and she finds men ugly, and yet you can’t romance her as the female Kamui (the player avatar), only as the male Kamui. How you may ask? Well, you’ll regret asking.

So the male Kamui drugs Soleil with a magic powder (without consent) that makes her perceive men as women, during this she begins having feelings for the player, so far suggesting it’s only because she now perceives them as a woman. When the powder wears off, she finds herself in love and attracted to the male Kamui sexually, asking him to touch her and so forth.

In her early dialogue she speaks of her lesbianism as a weakness preventing her from being a strong woman, and this is what causes the player to go through with drugging her and “turning her straight”. Once again, there is no option to romance Soleil with the female Kamui, despite her being a lesbian, you must go through with magical gay conversion therapy if you wish to romance her.

Countless people commit suicide every year due to gay conversion therapy or simply from having forced heterosexual advances pushed on them despite stating their homosexuality. Thanks Nintendo. If you wish to read the full dialogue translated from the Japanese release, here is is. 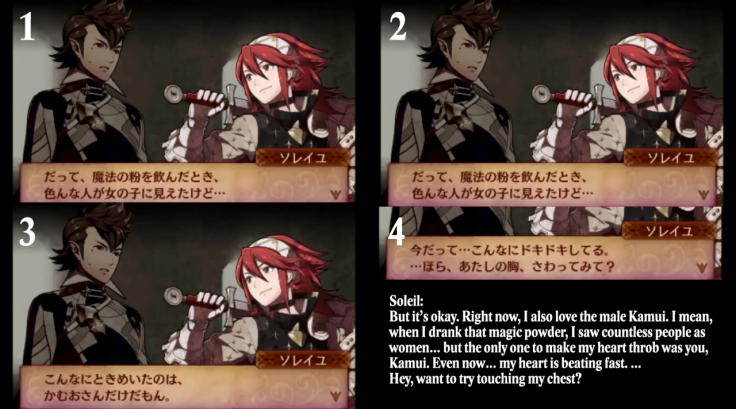 This is appalling. All Nintendo’s talk of trying to “reflect the diversity” is clearly just lipservice, an effort to quiet the people who have been complaining about the lack of queer visibility in Nintendo games. Honestly, if this is how they’re going to approach queer representation, I’d prefer they just erased us like they’ve been doing for 30 odd years. What’s worse – pretending queer people don’t exist, or actively, explicitly degrading us, all while pretending to champion diversity and inclusiveness?