It’s been a long time since I’ve really enjoyed a Tales game. There was a time when it was one of it favorite series’, but the last one that really hooked me was Tales of Eternia on PSP – and even that was a re-release of a much older game. I played almost every Tales game on PS3, but none held my attention for more than a couple of hours. The only thing that kept me going through Tales of Zestiria was the fact that I was reviewing it; if a could, I’d have abandoned it much earlier.

Needless to say, I didn’t have high hopes for Tales of Berseria, and I almost didn’t put in a review request for it. I’m glad I did, though, because 15 hours in, I’m completely hooked. It’s a much-needed fresh start for a series that’s been getting increasingly stale for a long time.

The defining aspect of Tales has always been its Linear Motion Battle System (LMBS). In 1995, a time when most JRPGs were turn-based, Tales of Phantasia made its mark with a battle system more akin to a beat ‘em up. That system got altered and embellished upon with each new game, growing ever more complex but not necessarily deeper or better. By Tales of Zestiria, it had become a bloated, unwieldy mess. 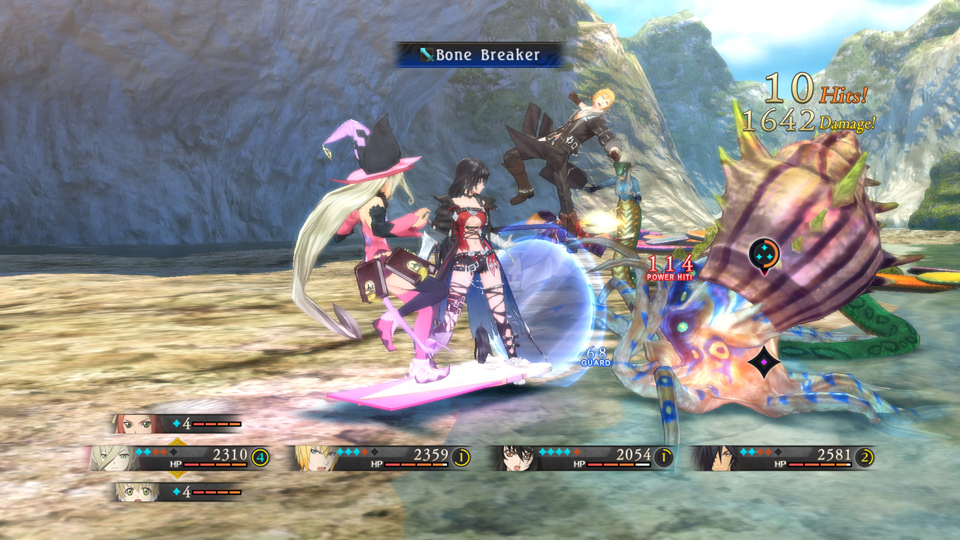 Tales of Berseria throws that all away in favor of simplicity and effectiveness. You can move around the battlefield freely – there’s none of the “2D motion in a 3D game” nonsense that a lot of the more recent Tales games had. You attack simply by pressing buttons, which each have combos built in. If you want to, you can play it like a button-mashing brawler and leave it at that.

You can also take a more tactical approach if you so choose (or if you’re playing on a higher difficulty, where this becomes vital to success). Each character has a set of default combos that update as they learn new skills, but you can also customize these to your liking. By playing smart, exploiting enemy weaknesses, and making well-timed blocks, you’ll earn Souls. The more Souls you have, the bigger the combos you can do – with three Souls stocked, you can string together three attacks, four souls means four attacks, and so on – but you can also spend them on powerful attacks. Of course, that limits your combo potential until you stock up on Souls again, so there’s an element of resource management as well. 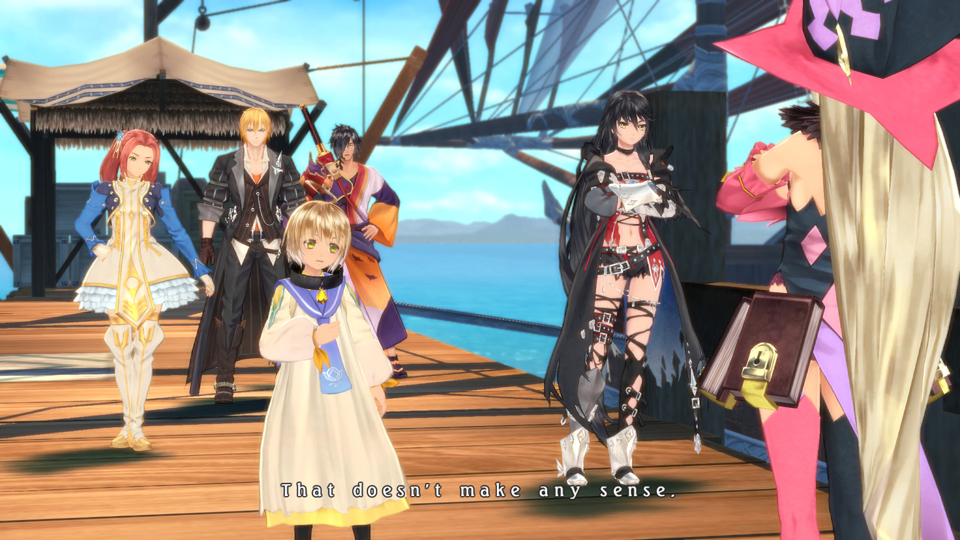 Enemies are similarly bound by their stock of Souls, so if you can find ways to keep them Soul-less, you’re at a distinct advantage. Each character also has their own quirks. For example, Velvet, the vampiric protagonist, can feed on enemies can gain different effects based on the sort of enemy it is, while the swordsman Rokurou can switch between different stances.

It’s a straightforward, action-heavy battle system that nonetheless has the depth to accommodate people who want something more tactical. That can be a difficult balance to achieve, and it’s something that Tales hasn’t really done well in a long time. Tales of Berseria does a fine job, though – I actually look forward to battles now, rather than avoiding them as much as I can, as I did in the last few encounters with the series. 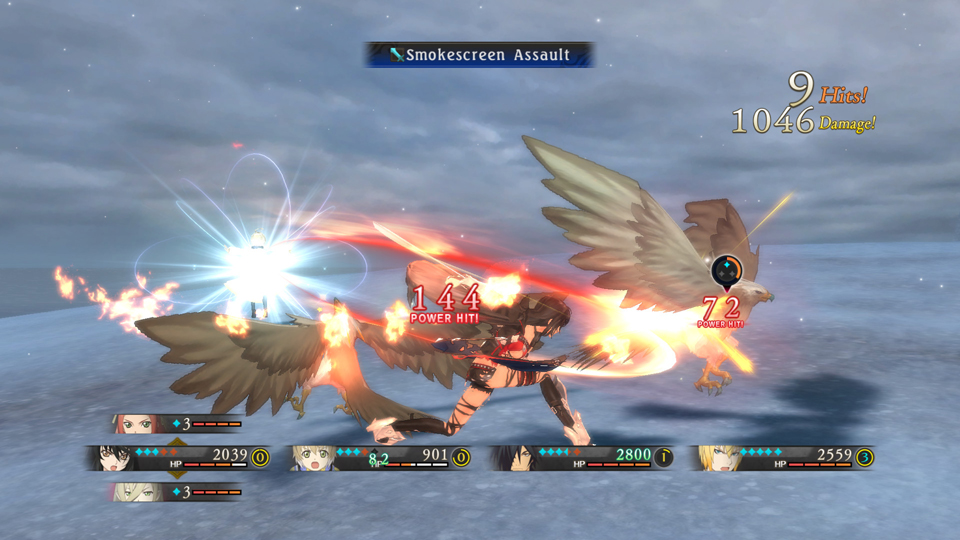 Something else Tales hasn’t done well in a long time is tell a good story. JRPGs tend to be formulaic and full of cliche characters, but the good ones use that to their advantage. They work with and build on those archetypes and expectations to let you form an attachment with the game’s world and people. The last few Tales games, though, have simply been stock-standard fantasy stories filled with cardboard cutout characters.

The cast of Tales of Berseria are certainly all JRPG archetypes, but even in the early parts of the game, they show signs of transcending that. This is truest of Velvet, a no-nonsense half-demon warrior who’s driven by a thirst for revenge, but who’s also vulnerable despite her stoicism. The story begins with a flashback to a young, friendly Velvet, who spends her life learning the sword, hunting, and caring for her sick little brother. When something happens – you can guess what – her whole life’s thrown into chaos. Fast forward to now, and she’s part demon and on a bloody trail of revenge. It’s all very exposition-heavy, but that context gives Velvet a sense of humanity that balances out her hard-ass berserker persona. 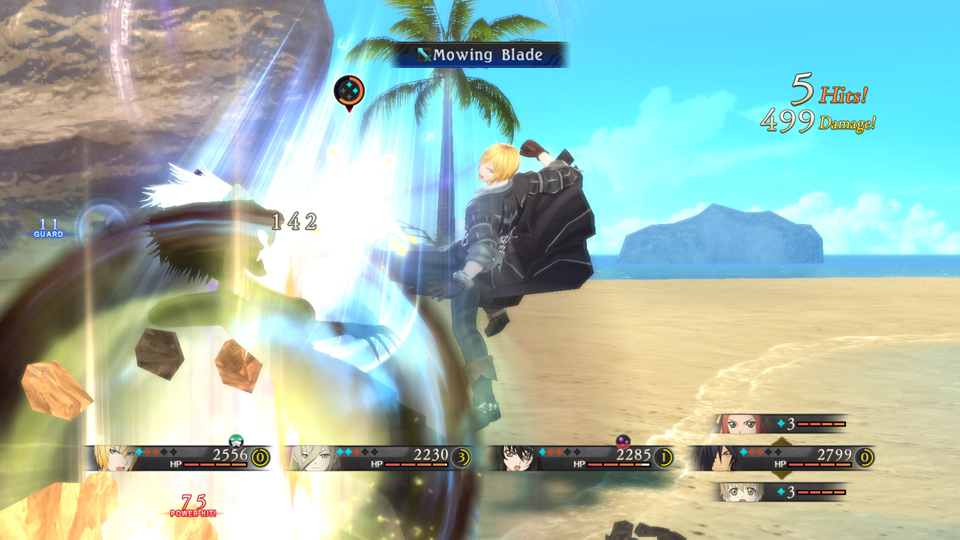 Berseria’s world is a sad one, plagued by a disease that turns people into demons and ruled by a fascist religious organisation. The Abbey believes it’s doing the right thing, but it rules with an iron fist and the demons it fights against are, first and foremost, people who’ve succumbed to a horrible disease. For the Abbey, the ends justify the means – even if those means include enslaving people with high magical potential, erasing their personalities, and turning them into human weapons for the fight against demons.

Right from the outset, it’s a far darker tale than any other Tales game. By that, I don’t mean grimdark or “edgy”; rather there’s a feeling of melancholy throughout everything. Tales of Berseria still has that typical JRPG humour, but even then, it’s in the context is something far more solemn.

We’ll see, of course. Some 15 hours in, I’ve barely scratched the surface of what Tales of Berseria has to offer. Those hours have been enthralling, though, and I can’t wait to dive back in and keep playing – which isn’t something I’ve been able to say about a Tales game in a while.

Tales of Berseria is developed and published by Bandai Namco. It’s available now for PlayStation 4 and PC.

A PS4 press copy was supplied by Bandai Namco for this article.