Styx: Shards of Darkness is one of the best stealth games in a long time, and that’s only made better by its gross yet endearing goblin hero.

Having never played the previous game, I didn’t know what to expect from Styx: Shards of Darkness. I was intrigued by the idea of a sneaking game in a Warhammer-like fantasy world, but skeptical about what a studio that cut its teeth on cycling and horse racing games could do with a genre as tricky as stealth. I certainly never expected to find one of the best stealth games of this generation, and a game that effortlessly walks a tightrope between razor-sharp wit and crass, gross-out humour, but that’s exactly what I got.

Taking place in a Warhammer-inspired fantasy world, Styx: Shards of Darkness follows goblin assassin Styx in his adventures in human stabbing and getting paid. This is a world where the different fantasy races don’t get along well to say the least, and goblins are bottom of the dung heap. They’re hunted by the bigger races, and most can’t even talk, but Styx gets by with a sharp tongue and a sharper blade.

Styx: Shards of Darkness opens with Styx on a simple mission to steal some money, but events go south and he soon finds himself forced into an uneasy alliance with a human – not just any human, but Helledryn, the woman in charge of the goblin-hunting organisation C.A.R.N.A.G.E. Infiltrating a secret council initiated by the dark elves, they discover a conspiracy: the elves are working selling powerful weapons imbued with magical quartz to humans, dwarfs, and orcs, in exchange for goblins to be experimented on. 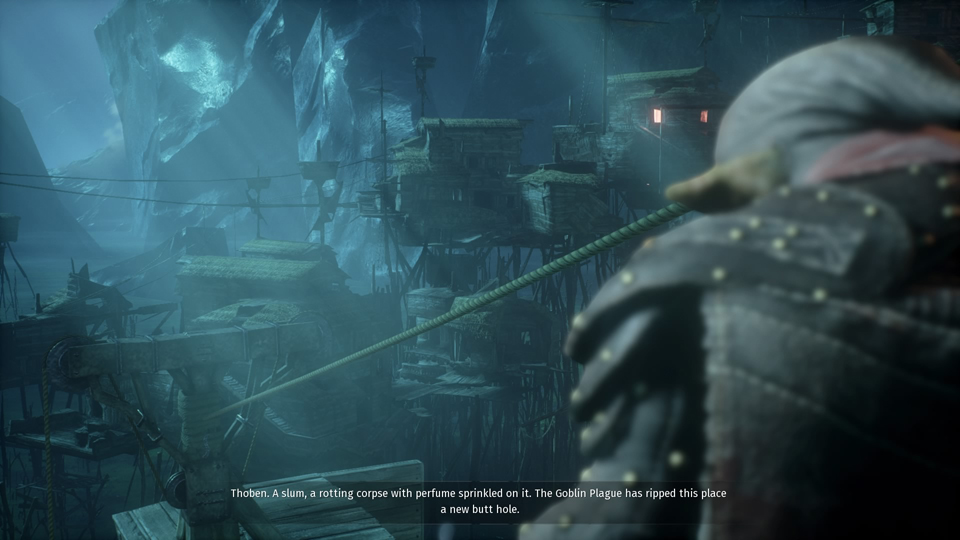 It’s a simple plot that never goes anywhere particularly interesting, but it’s window dressing that sets up the stealth shenanigans and humour that make Styx: Shards of Darkness such a great game. It’s really difficult to get a stealth game right, because there are so many different factors that have to come together just so. Level design needs ridiculous amounts of attention to detail in terms of how different spaces interact with one another, giving players enough to work with to creatively approach the game’s challenges without overwhelming them with choice. Enemy AI needs to be both smart enough and stupid enough to be able to be outsmarted in a battle of wits, which is a really difficult balance to achieve. The player character has to be powerless enough that they feel fallible and vulnerable, but with enough tools to be able to overcome obscene odds.

Styx: Shards of Darkness juggles all of those requirements almost flawlessly, creating one of the most sublime stealth experiences since the days of Tenchu. That’s a hell of an achievement in its own right, but it’s particularly welcome in an age when the standard approach to stealth is to make it optional in the name of “player freedom”. “Play how you want to play!” is a nice sentiment, but it really kills the idea of being a stealth game because a guns-blazing approach is almost always easier and more efficient.

There’s none of that nonsense here. Styx can’t really fight; he can parry attacks with good timing and then quickly kill the assailant, but that’s an act of desperation, far too unreliable to be make combat first an effective approach. Styx: Shards of Darkness demands a stealthy approach, but it gives you all the tools you need to creatively solve the problems presented to you, and to adapt when the shit inevitably hits the fan. 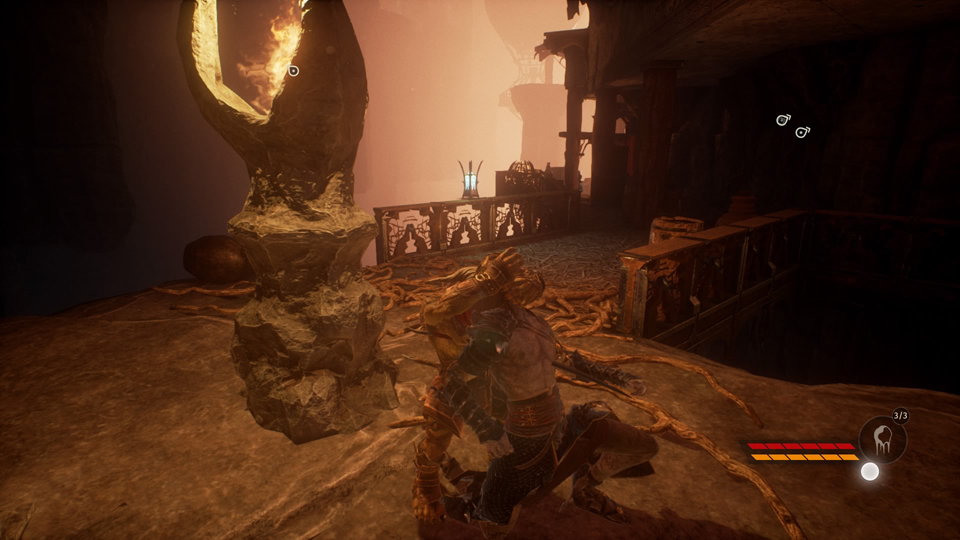 Obviously, there’s the usual array of stealth mechanics: sneaking, peeking around corners, hiding in shadows, stealth killing unsuspecting enemies, and so on, but Styx’s goblin genes make him a unique assassin. He can spit in food bowls and water fountains to poison them, killing unsuspecting enemies looking for a simple snack. He can turn invisible for brief periods of time; I don’t think I need to tell you how useful that is. Most significantly, he can create a clone of himself, which you can manually control to explore and create distractions while Styx himself hides in safety.

You’ll need to make the most of all these abilities, because Styx: Shards of Darkness is constantly throwing up new challenges that force you to alter your approach. Armored guards can’t be killed by regular means, so you need to find ways to lure them into traps (or simply avoid them). Weird bug things are blind, but particularly sensitive to sound, and dwarves have powerful noses that can smell your presence even if they can’t see or hear you; each needs a different approach. Different levels take different approach to design, from wide open outdoor spaces to the narrow confines of a network of caves. One level forces you to play without weapons, and another puts you through a series of weird platforming challenges. What remains constant through all of that is rock-solid stealth gameplay that encourages and rewards creativity.

If that’s not enough to entice you, there’s Styx himself. He’s a foul-mouthed, crass little creature, but in the most endearing way possible. His idle chatter as you go about each mission is hilarious, from fourth wall-breaking jokes about other stealth games to gross-out humour that’s funnier than it has any right to be. When you die, you get a special message from Styx – for example, “How about this? I’ll come out there and take the controller and you come in here and die… painfully!” 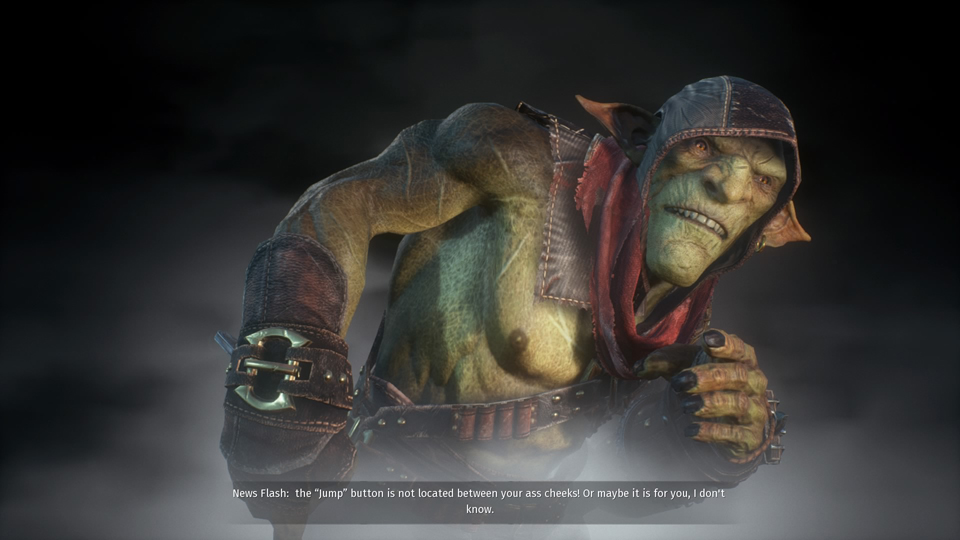 The most surprising thing is that, crass as it is, Styx: Shards of Darkness avoids overplaying the grossness or mistaking uncritical offensiveness for humour. That’s something you see far too often from attempts at gross-out humour, especially in video games, but Styx finds just the right balance. One of my favourite examples is a song he sings as you leave one particular town that, I think it’s safe to say, Styx isn’t particularly fond of:

My one gripe – and it’s a small one, in the scheme of things – is that the levels are too big and too long for their own good. The first time through, you can expect to spend upwards of an hour on each mission, often closer to two, which isn’t ideal in a game that demands constant focus and concentration. You can save anywhere, so it’s easy enough to just save and take a break, but the psychological impact and sense of closure that comes with finishing a mission before taking a break can’t be underestimated. This is becoming a common trend in the stealth genre, and it worries me, because this is one place where there really can be too much of a good thing.

That’s made worse by the fact that a lot of these huge levels recycle areas and force backtracking, especially in later missions. Styx: Shards of Darkness is a big game, but it feels needlessly padded out. It’d really benefit from a less-is-more approach. Still, that’s a minor blemish on a game that comes as close to stealth gaming perfection as we’ve seen in a long, long time. Garrett, Ezio, and Corvo can eat their hearts out – the true master assassin is this sneaky little goblin who curses like a sailor and (probably) smells like shit.

Styx: Shards of Darkness is developed by Cyanide Studios and published by Focus Home Entertainment. It’s available now for PlayStation 4, Xbox One, and PC.

A PS4 press copy was supplied by Fiveight Distribution for this review.