With its original 3DS release back in 2014 (well, early 2015 for New Zealand), Shantae and the Pirate’s Curse was the first Shantae game I’d played. I was somewhat familiar with the franchise just through general exposure and my fondness of some other WayForward games I’d played, but I didn’t have any first-hand experience. As much as I loved the game back then, I couldn’t really appreciate just how much it carried the series forward.

Since then, I’ve had the chance to play Shantae: Risky’s Revenge on both Steam and PlayStation 4, as well as a reasonable chunk of the original Shantae on 3DS Virtual Console. Now Pirate’s Curse has also found its way to PS4 (as well as Xbox One), and I’ve been able to revisit it with a fresh perspective. Far more than a simple sequel, it expands on the series’ foundations in some drastic ways – while still remaining true to what makes Shantae special.

With Shantae being a genie, the first two games had plenty of emphasis on genie powers – specifically, Shantae’s ability to shapeshift by performing magical belly-dances. In each game, you’d learn new dances through progress, giving Shantae new abilities and expanding her range of tools for exploration. The monkey form, for example, would let her jump much higher and cling to walls, while the elephant form could use its heft to break certain rocks and walls. 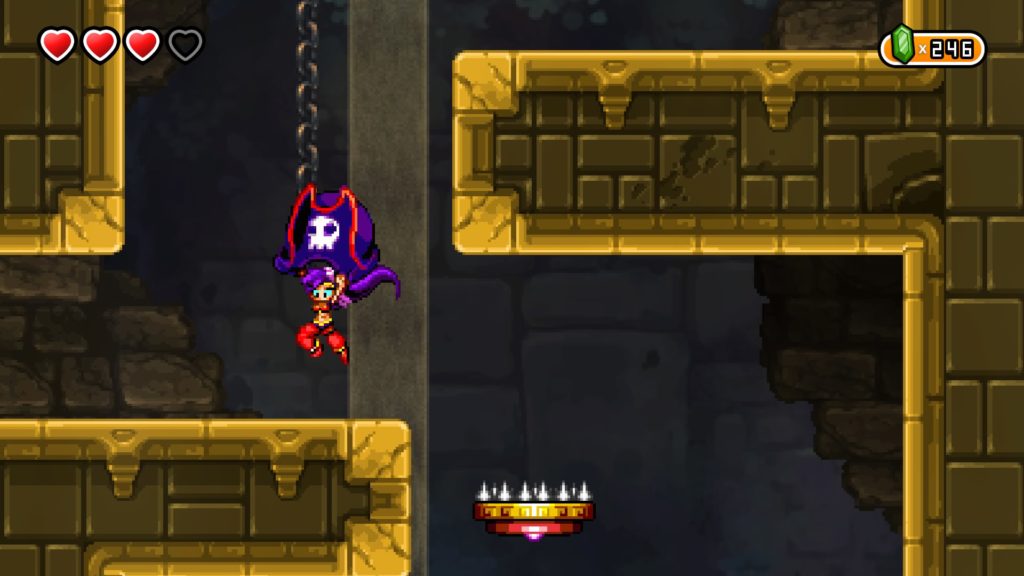 Pirate’s Curse takes a very different – and much better, I’d say – approach. The end of Shantae: Risky’s Revenge saw Shantae lose her genie powers, and so she no longer has her belly-dances in Pirate’s Curse. Instead, an uneasy alliance with her arch-nemesis, Risky Boots, sees Shantae collecting pieces of pirate gear that give her new abilities. A pirate hat doubles as a parachute, letting Shantae glide over great distances; a sword can be used for a downward-travelling attack that can break rocks; with a cannon, Shantae can double, triple, and even quadruple jump.

In earlier games, Shantae was always limited to the abilities of a single form at any time. Late-game dungeons would utilise different forms at different times, but the need to stop and shapeshift limited options for combining these different abilities – something that isn’t an issue in Pirate’s Curse. Each skill is available by simple button press, and with them all having unique commands, you always have access to whatever moves you’ve learned.

This means that you can, for example, use cannonballs to launch yourself to a great height and then glide with the pirate hat, reaching a platform that wouldn’t be accessible by either tool on its own. You can use Risky’s Boots to gain enough momentum to reach a distant platform that needs to be activated with the scimitar, before landing and using the pistol to activate an otherwise unaccessible switch. As the game goes on, exploration puzzles become more complex, and by the end of the game you’ll be chaining all five tools together in a way that you could never dream of doing with belly-dances. 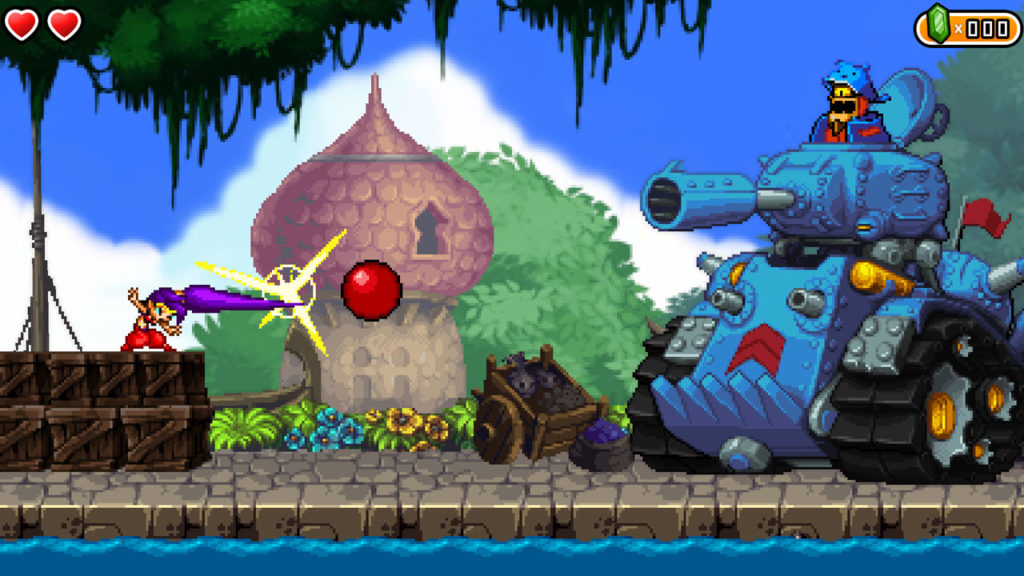 The other major difference in Pirate’s Curse also stems from the benefits of Shantae’s newfound alliance with Risky Boots. Thanks to Risky’s pirate ship, the game isn’t contained to the areas surrounding Scuttle Town, as was the case with Shantae and Risky’s Revenge. Instead, Pirate’s Curse spans five different islands, each with its own theme, hazards, enemies, and unique labyrinth housing a boss and a pirate tool.

This splitting up of the map does take away a bit of the thrill of exploring a large, interconnected, Metroid-like map, but that’s never really been Shantae’s strong suit. Even though the areas of the first two games were directly connected to one another, they were very compartmentalised. The islands in Pirate’s Curse just streamline that, and offer a shortcut to more varied, interesting locations that wouldn’t necessarily make sense to have in Scuttle Town’s immediate surrounds, like the snowy Frostbite Island.

So, at least from a purely mechanical and game design perspective, Shantae and the Pirate’s Curse is drastically different from previous titles, and it’s all the better for it. Beyond that, though, it’s more or less the same Shantae you know and love, just with a more pirate-y flavour. 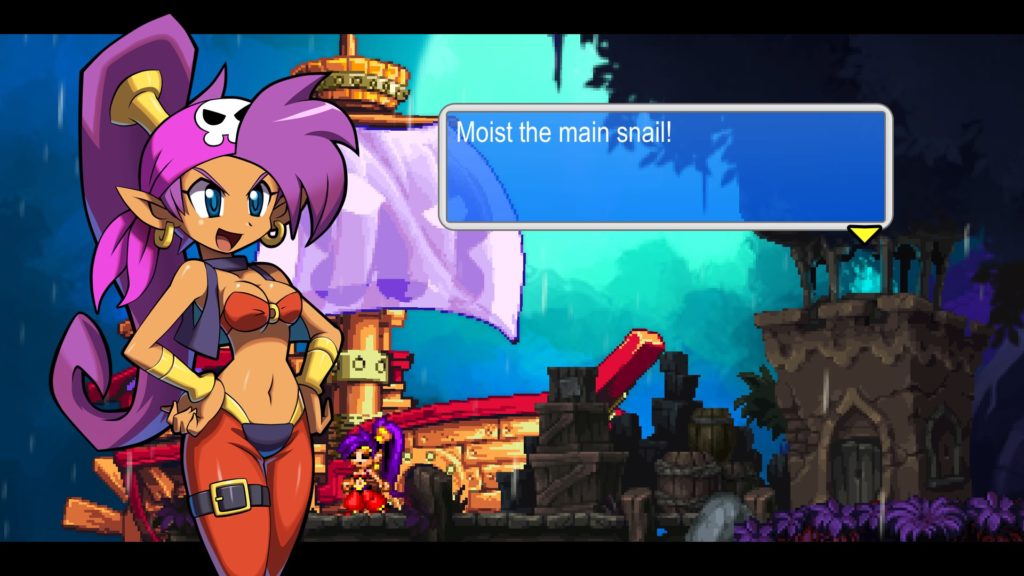 Shantae herself is still the same happy-go-lucky, good-hearted, adorable goofball you know and love, only now you get to see her playing pirate and trying to build a friendship with her former (?) enemy. In fact, for all the game’s silly overtones, there’s a really moving subtlety to the budding relationship between Shantae and Risky. The former’s tireless efforts to take the high road and mend fences speak volumes about her character, and the latter’s reluctant acceptance hints at a performativeness to her villainy and the possibly that, just maybe, she’s a good person at heart.

As you’d expect from WayForward, Shantae and the Pirate’s Curse is absolutely gorgeous – bright, vibrant, colourful 2D graphics harkening back to the glory days of the Super Nintendo. The sprites and backgrounds themselves stick to a fairly low-resolution, pixelated approach that gives the game a lovely 16-bit feel, while other assets – character portraits, text boxes, menus, and so on – are presented in HD for the console release.

This contrast works beautifully, with the detail in the portraits and the delightful sprite animations coming together to give each character a deep sense of personality. Being the main character, Shantae herself obviously benefits the most from this, especially towards the end of the game when she starts really embracing her pirate side. 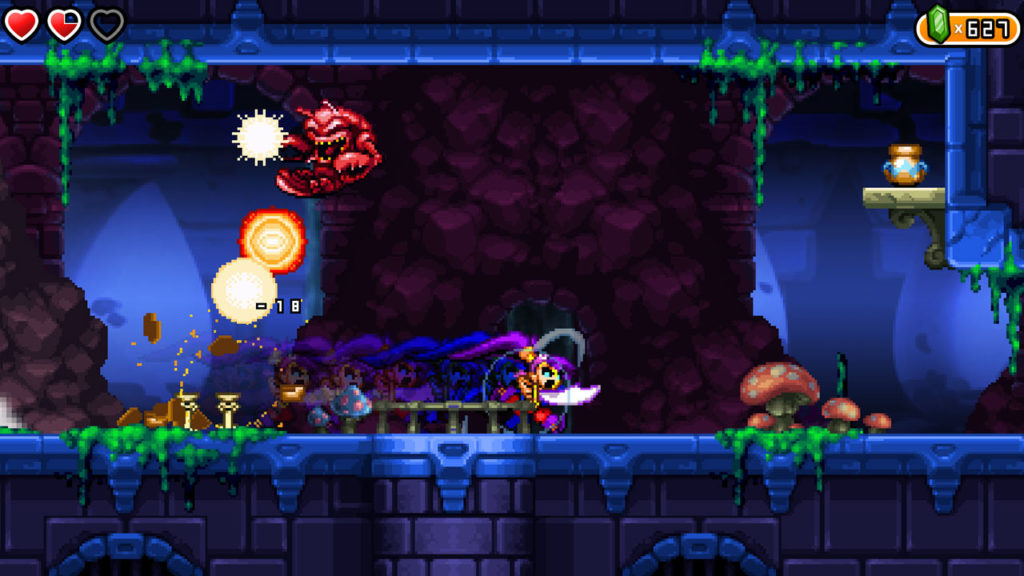 What this all amounts to is a really great little platformer for PlayStation 4. Beyond just feeling like a second coming for those SNES greats like Go! Go! Ackman and Earthworm Jim, it’s an impressive development for the Shantae series as a whole. Having seen just how big the jumps are between Shantae, Shantae: Risky’s Revenge, and Shantae and the Pirate’s Curse, I’m looking forward to the upcoming Shantae: Half-genie Hero even more than I had been, and that’s quite something.

Shantae and the Pirate’s Curse is developed and published by WayForward. It’s available now for PlayStation 4, Xbox One, PC, Wii U, and Nintendo 3DS.

A digital press copy was supplied by WayForward for this review.