Earlier this month, Square Enix Japan released a new mobile game, Samurai Rising. While the title certainly make any allusion to Final Fantasy, there’s enough throwback to Square’s flagship to make it a Final Fantasy game in all but name. Familiar character jobs, like the Black Mage, White Mage, Dragoon, and so on. Recognisable monsters like Malboro and Bomb. A story focused on the crystals that sustain the world’s life. Character designs by Akihiko Yoshida – even if you don’t know the name, you’ll surely recognise his style, which resembles his work on Final Fantasy Tactics and Bravely Default.

However, don’t expect turn-based, menu-driven combat. Rather, Samurai Rising is an action RPG that’s clearly inspired by White Cat Project (or, if prefer the painfully generic name for the Western release, Rune Story). That’s a good thing, because White Cat Project is certainly one of the most clever, creative approaches to a touchscreen-based control scheme. It took a genre I’d considered one of the least mobile friendly and made it a natural fit.

Samurai Rising emulates it to a T. In both games, you move your character around simply by touching the touchscreen anywhere to create an anchor point, and then sliding your thumb in the direction you want to move. Tapping the screen (again, anywhere) makes you attack, and your character automatically targets the nearest enemy when you do. With a quick swipe in any direction, you can do an evasive roll in that direction.

That’s pretty much it. Both games a few other inputs, like tapping icons at the edge of the screen to change character or, in Samurai Rising’s case, to perform special moves, but the bulk of the game uses one of the most wonderfully intuitive touchscreen control schemes I’ve encountered in an action game. 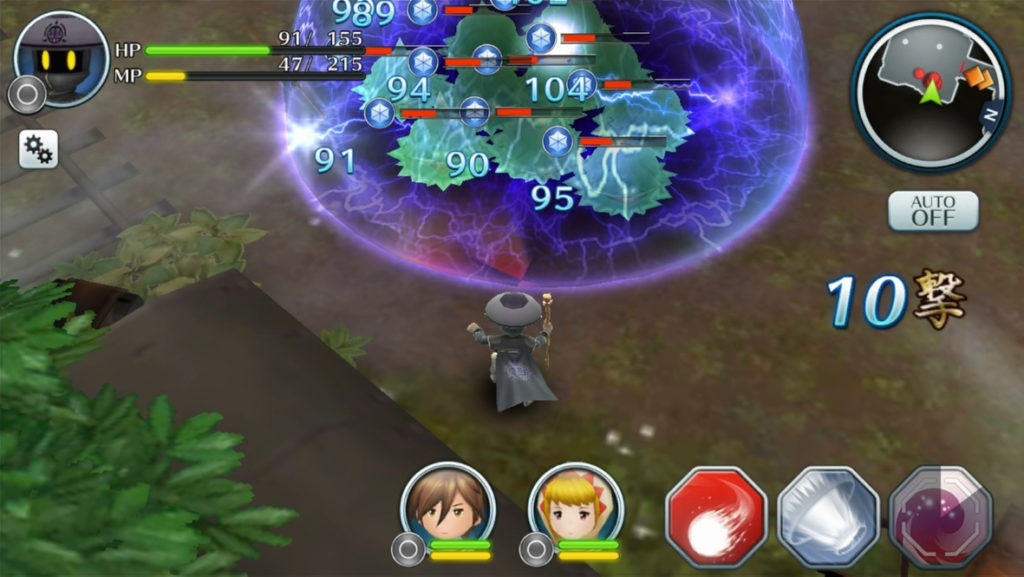 The other delightful thing that Samurai Rising has followed White Cat Project’s suit on is an energy/stamina system – or, more precisely, the lack thereof. I’m generally quite tolerant of free-to-play mechanics like gatchas, but energy systems are the one I can’t stand. If you’ve ever played any free-to-play games, you’ll probably have encountered this: you have a limited pool of energy (or stamina) and each level you play consumes a certain amount. Initially, the energy requirements are small and the gauge refills quickly, but as you progress, you’ll end up spending more and more time waiting for your energy to restore, or paying for a quick top up. Most pay mechanics give you something for your money; energy systems actively withhold the game from you. I hate them, and so to see no such thing in Samurai Rising is a delight.

Of course, it’s still a free-to-play game, so it has microtransactions in the form of “gatcha” lucky dips. Pay a certain amount of crystals, either bought or earnt by playing, and you’ll get a random character; buy in bulk, and you’ll get a small discount. If you’re lucky, you’ll get a powerful 4- or 5-star character, but more than likely, you’ll get a 3-star one. The more characters you collect, the better prepared you’ll be for the challenges ahead, both by amassing a selection of powerful ones and by using weaker ones as fodder to “feed” the others and strengthen them. So far, I haven’t run into any challenges that would demand powerful gatcha characters, but I’m still in the early parts of the game. The relative ease of earning crystals early on also helps with setting you up with a decent party that should be sufficient for much of the game, aside from maybe the challenge levels. Time will tell if it becomes a “pay-to-win” game, but in all honesty, I don’t see that happening. At the very least, you’ll be able to see the story through.

My first impressions of Samurai Rising are very positive – it’s basically White Cat Project, one one of the best mobile action RPGs, dressed up like a Final Fantasy game. Here’s hoping Square Enix sees fit to give this a global release.