RPG Maker Fes may not have the power or commercial possibilities of its PC bretheren, but it’s still a great, easy introduction to the world of game making.

My first experience came with RPG Maker 95, back around the dawn of the 21st century. There was no official English release, so fan translations and unauthorised downloads were the order of the day. It had a limited suite of tools, especially compared to modern incarnations of RPG Maker on PC, but it opened a world of possibilities. To a soundtrack of Hybrid Theory (RIP Chester) and the melodious tones of a dial-up modem, I sat and I laid tiles to build dungeons, set values and names for various spells and pieces of equipment, and strung together events with the simple drag-and-drop scripting interface. I never finished any projects, but I was making games, dammit!

Fast forward to today, and RPG Maker has grown into a bona fide commercial development platform. The core ideas of drag-and-drop, 2D sprite-based RPG development are still in place, but the depth and power of the engine has grown dramatically with things like custom code support, and a vibrant creative community – bolstered by official Western releases and plenty of developer support – have made it into one of the best entry-level game development tools. Even using the most basic tools that RPG Maker offers, you can craft a masterpiece – just look at the likes of To the Moon and Corpse Party.

RPG Maker Fes brings the franchise to 3DS, but it’s not the sort of powerhouse development suite that the last few PC releases have been. Instead, it feels like a throwback to RPG Maker 95, with a limited set of tools and few options for release of your creations. I don’t mean that as a criticism, though; rather, Fes channels the simple charm of the early RPG Maker games, and though you can’t use it to produce a commercial game, it’s an easy, fun way to dive into game making, and you can share your creations with other 3DS players. 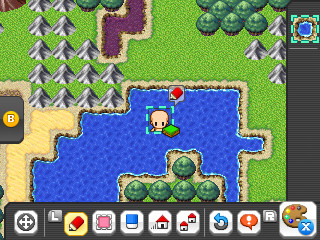 Essentially, there are three main components when making a game in RPG Maker Fes: maps, events, and database entries. Maps are pretty straightforward, and should be familiar to anyone who’s ever used a level editor or the like in games that have them. From a palette of different tiles, you drag and drop them to build up an environment – town, dungeon, overworld, or what have you. You can manipulate collision settings so that players can’t just walk through walls or over mountains, and layer different tiles to create more complex designs.

Events are the logic that drives the game. They admittedly take some familiarising, especially if you’ve never used any other incarnation of RPG Maker, but they’re still a lot more intuitive than learning coding. With a drag-and-drop interface, you pretty much just string different actions and logic statements together to create whatever system you want a particular event to drive.

The most basic example of this is a map transition: set an event to activate when the player’s character steps onto the chosen tile, with a teleport action to certain coordinates on a specific map. A cutscene would work a similar way in terms of activation, but instead of a teleport action, you’d use a handful of speech actions and NPC movement actions to create the scene you want. You can use events to trigger battles, change party make up, give items to the player, activate switches, set off traps – pretty much anything you’d expect to be able to do in a tile-based RPG.

Even with a relatively limited set of actions and logic statements (at least compared to the limitless possibilities of writing code from scratch), you can create some rather complex and detailed events – certainly enough to tell the sorts of stories that 16-bit JRPGs are known for. You can’t do anything that deviates from the basic RPG building blocks that RPG Maker Fes uses, so there’s not as much scope for mechanical creativity as there is in the PC versions of RPG Maker, but you can still create a wide range of scenarios.

The final component is the database, which is where all your characters, items, abilities, enemies and enemy groups, and the like are stored and manipulated. This is as simple as editing values in various fields, depending on what particular section of the database you’re in: for characters, you’ve got name, class, portrait and sprite graphics, and experience curve; for equipment, there’s the name, item graphic, stats, and description; abilities have a range of things to tweak what actually happens when that ability is chosen; and so on.

With these three tools, you can make just about any classically-styled JRPG you can imagine, and then share it with other players online. Crucially, you’re not sharing with just other RPG Maker Fes owners, but anyone who chooses to download the free RPG Maker Player app from the eShop. So even though you can’t sell your creations or distribute them on other platforms, you can still reach a wide audience through Fes alone – and if you want to take the next step, the PC releases work in a similar way, just with a lot more functionality. 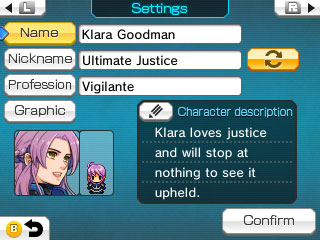 RPG Maker Fes does have its limitations, though I don’t think they’re inherently a problem. You can’t fiddle with the battle system too much; it’s a classic turn-based, first-person set up (think early Dragon Quest games), and creative item and ability design is about as far as you can go with customising it. Things like controls, menus, and the user interface are all standardised. The only options for art and music assets are what’s included with the game and any official DLC that comes out, with no way to customise these or import things from an external source.

This does mean that most creations will look and feel very alike. Still, this simplicity is part of the appeal, and the limitations can also be their own source of inspiration. It’s a lot of fun just seeing what you can do within RPG Maker Fes’ systems, and just how far you can push the engine. Though it’s certainly not designed for it, you could make a (very simple) tactics RPG by ignoring the built-in battle system and using a complex assortment of events and variables to drive tactical, tile-based combat. Or a pseudo visual novel a la Corpse Party, or a sort of sports game where your characters’ abilities are sports moves and the “monsters” are other players. There’s a lot you can do even within these constraints.

I do think the game could benefit from a tutorial or some sort of in-game help tools. The digital manual has a lot of information, but it’s a bit of a pain to pull up every time you want to check something. The tools themselves are relatively intuitive, but there’s still a lot to take in when you’re thrown into the deep end. Even just a brief tutorial going over the basics, as a way of inducting completely new players to the software, would have gone a long way.

Even so, RPG Maker Fes is a wonderful creation suite for 3DS. It’s not as feature-rich as its PC counterparts, and won’t suit the needs of someone looking for a serious, commercial game development tool, but for everyone else it’s a fun, simple way to get a feel for putting together a game. Even if you can’t sell your creations, the RPG Maker Player tool gives you a large potential audience. For anyone who ever fooled around with RPG Maker 95 or RPG Maker 2000, it also provides a fun nostalgia trip, and a reminder of how far this series has come.