This week, Square Enix released Romancing SaGa 2 on iOS and Android. With the publisher’s obsession with porting older games to mobile, there wouldn’t be anything remarkable about this release, if not for the fact that this is the game’s first official localisation in 23 years since it came out in Japan. This is huge, because it shows a willingness on Square Enix’s part to do what I’ve long thought they should: finally bring some of their previously Japan-only games to the West.

The fifth game in the SaGa series, Romancing SaGa 2 first came out in 1993 for Super Famicom, and has subsequently been ported to a few other platforms, like Wii, Wii U, PS Vita, and mobile phones. It has a reputation for being one of the better SaGa games, but until now, options for playing it in English (or any language other than Japanese) have been sparse. It’s never even seen the fan-translation treatment that has brought so many other Japanese games to non-Japanese players, with the few attempts that there have been never getting very far.

This is, perhaps, part of why Square Enix did decide to localise the Android / iOS release, but it still comes as a very pleasant surprise. Localisation is a big and costly job, especially for a game that’s text-heavy even by JRPG standards, with a lot of branching dialogue and narrative elements. SaGa isn’t a series that has much footing outside Japan, and it being on something of a hiatus since Unlimited SaGa’s poorly-received (in the West, at least) release in 2003 surely hasn’t helped. So why would Square Enix take a risk like investing in a localisation job for Romancing SaGa 2? They’re probably testing the waters before committing to bringing across the upcoming SaGa Scarlet Grace, a game that’s an even riskier proposition because it’s exclusive to the struggling PS Vita. It could also be that they’ve seen enough success with other mobile ports of SNES-era games – various Final Fantasy games, almost all of the Dragon Quest series, Secret of Mana, Chrono Trigger, and so on – that they’re hoping to ride that momentum.

Whatever the reasons, I hope that Romancing SaGa 2 does well in the West (go out and buy it, people!). If they can see an appetite, Square Enix might just look at other such retro-localisation projects, and that is a very exciting proposition because Square Enix has an impressive library of Japan-only games.

Cast a wider net, and you find games like Blue Wing Blitz, a tactical JRPG developed by the Front Mission team, focused on aerial combat; Cleopatra no Mahō (The Cursed Treasure of Cleopatra), a first-person RPG based on Egyptian mythology; and Racing Lagoon, game that combines RPG mechanics with street racing. Mobile is perfect for adventure games like  Suishō no Dragon (The Crystal Dragon) and Chrono Trigger spinoff Radical Dreamers. I’m sure I’m not the only person who’d love to look back on Square’s text adventure origins with Death Trap and Will: The Death Trap 2. 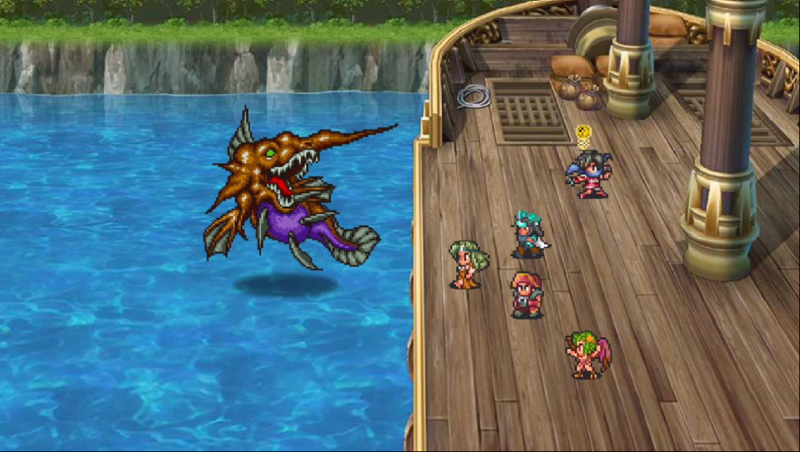 Of course, there are plenty of retro games that have previously been localised that I’d love to see kept alive with a port to mobile or a current platform (like the early SaGa games for Game Boy, which were released under the name Final Fantasy Legend (II, III) outside Japan), but I don’t think we have to worry about that – Square Enix is always ready to capitalise on nostalgia, and if it keeps those classics readily available, I have no issue with that. But Romancing SaGa 2’s localisation sets a very exciting precedent for the preservation of gaming history, and I hope it’s something we see a lot more of.

At the bare minimum, Square Enix ought to port and translate Bahamut Lagoon and Seiken Densetsu 3, because those games are excellent and deserve to be available to the masses.