In a combination of moreishness and nostalgia, I followed up SteamWorld Dig 2 by immediately firing up SteamWorld Dig for the first time in years. I knew that the new game was an improvement over the same ideas that drove the original—such is the way with sequels, generally—but I didn’t really realize how much of an improvement Image & Form put into their latest steambot adventure. The basic concept of a “Metroidvania-inspired mining platform adventure” still rings true, but almost everything has been tweaked, streamlined, and built upon. It’s such a big jump that SteamWorld Dig, great as it still is, feels archaic by comparison.

After the events of SteamWorld Dig, that game’s hero Rusty disappeared, prompting Dorothy—Tumbleton’s humble shop assistant—to set out on a journey to find him. Her quest brings her to another mining town called El Machino, where SteamWorld Dig 2 begins in earnest. With a pickaxe of her very own, Dorothy dives into El Machino’s mine in search of treasure and, ultimately, her friend.

At first brush, the structure and gameplay loop is almost identical to that of the first game. You dig your way down the mine, one tile at a time, looking for the jewel-encrusted rocks that signify ore or gems. Once your bag is full—which doesn’t take long at all—it’s back to town to sell the goods, maybe buy some upgrades, and then return to the mine to dig deeper. Early on, your progress is hindered by rocks that are too hard to break, but as you upgrade your pickaxe or find special tools within the mine, like a pneumatic drill. By way of digging through the mine, you also create your own platforms. You could dig every single diggable tile, but aside from being a bit of a waste of time, you’re also destroying the same platforms that you use to get around. If you’re not careful, you can even temporarily lock yourself out of reach certain areas until much, much later in the game. But you’ll never get stuck, and this is SteamWorld Dig 2’s first major departure from its predecessor.

In SteamWorld Dig, the mine was procedurally generated at the start of a new game, and digging yourself into a corner where the only possible way out was to self-destruct was a very real possibility. There were tools to help with this, like ladders that you could place, but if you ran out of them, well… tough. By contrast, SteamWorld Dig 2 isn’t procedural, and the mine is carefully designed so that even if you destroy every tile that you can, the placement of permanent, unbreakable rocks means there’s always a way out. It’s possible to lock your way out of reaching certain gems or collectibles until you get a full suite of upgrades towards the end of the game, but you can’t bury yourself alive.

Some might see this as a removal of one of SteamWorld Dig’s unique elements; careful digging was a survival tactic in that game as much as anything else. That’s still present in SteamWorld Dig 2, but it’s more an issue of convenience now: you can inconvenience yourself with poor digging, but it never leads to failure. It also means there’s no need to lug ladders around and worry about your supplies, helping to streamline the game as a whole. As part of this new approach to level design, SteamWorld Dig 2 doesn’t limit itself to one mine; over the course of the game, you’ll guide Dorothy through four different but connected sections with different biomes and visual palettes. There’s the standard dusty mine, a place full of lush vegetation and toxic water, and a couple of temples, one of which is built under a volcano. SteamWorld Dig had its share of visual variety, but that was purely based on how deep you dug. With its different mines, SteamWorld Dig 2 feels bigger, more intricate, and shows off its Metroidvania inspiration a lot more.

Speaking of Metroidvanias, upgrades are everything in SteamWorld Dig 2. You have some decent navigation tools at the start—you can dash and dash jump, as well as climb any vertical surface—but the upgrades you find along the way take that to the next level. There’s a hook shot that lets you pull yourself towards distant rocks and walls, and for a big portion of the game, this is your main means of getting around. The Pressure Bomb and Grenade Launcher let you destroy blocks some distance away, allowing you to dig paths that the pickaxe alone would never let you, especially when you upgrade them to be usable while jumping. The jetpack is particularly useful for obvious reasons; initially you can only use it for short bursts, but with unlockable modifications you can literally fly anywhere you please.

As you’d expect, the mines are designed to make full use of these abilities, and there’s plenty of incentive to revisit areas to collect things you couldn’t get the first time round. Caves are also plentiful; these self-contained little levels are more focused on puzzle solving than exploring, and offer plenty of treasures to collect. Many of them are required to progress through the game, but there are also a few optional ones that tend to be trickier. For those wanting a hardcore platforming challenging, getting 100% completion unlocks a set of hard-as-nails Trials that’ll push your mastery of the game’s tools and systems to the max. 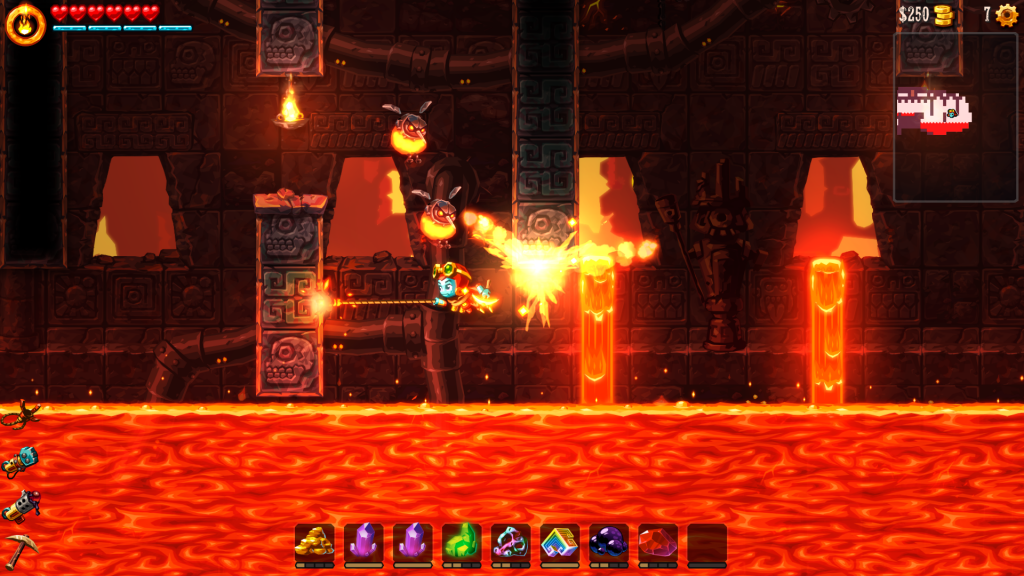 The items you find are useful in their own right, but modifications are where they get really handy. Each gadget has a number of different mods that you unlock by finding blueprints or levelling up, and you activate these mods by assigning Upgrade Cogs found throughout the game. More effective mods require more cogs, and you never seem to have quite enough to cover everything, so there’s always a question of juggling priorities. The nice thing about this system is that nothing’s set in stone—you can remove a mod as easily as you install it and apply those cogs to something else, allowing to freely try things out or use different builds for different things.

The framing for all of this is a straightforward story about a steambot looking for her lost friend. It may not be deep, but it’s peppered with colourful characters that bring the game and its world to life, and it works well for giving context to the gameplay at the SteamWorld Dig 2’s core. It’s also a nice role-reversal of the tired old damsel in distress trope, and Dorothy is every bit as charming a hero as Rusty was.

When the credits rolled, all I wanted was more of SteamWorld Dig 2—not because it’s “too short” or any nonsense like that, but because it’s just so captivating that I want to play it forever. It’s everything that made SteamWorld Dig one of the best games of 2013, but taken to the next level, and I just know that it’s going to have a similarly special place in my heart for years to come.