Mystik Belle is a neat Metroidvania with a heavy focus on item puzzles, all wrapped gorgeous pixel art that calls to mind the last days of Super Famicom.

Belle McFae is a freshman at Hagmore School of Magic, skilled at fire magic and getting into trouble. One fateful night, that latter talent sees her framed for disrupting an ancient ritual, and the school’s headmistress—ignoring Belle’s plea of innocence—tasks her with fixing the problem. Fail, and she’ll be expelled.

To avoid such a cruel fate, Belle has to search the school for the three key ingredients of the Wagisnacht Brew: a werewolf’s claw, a bloom of twilight, and a dragon scale. Needless to say, these aren’t easy things to find, and the night brings out all sorts of ghouls to haunt Hagmore’s corridors.

So begins Mystik Belle, a cute exploration platformer (or Metroidvania) from indie outfit Last Dimension. Playing as Belle, you explore the labyrinth that is Hagmore, solving puzzles and collecting upgrades that open new paths. Ghosts, skeletons, and other such monsters get in the way, but Belle’s fire magic is more than a match for them. Defeating bosses earns Belle new abilities to aid exploration: a double jump, an air-dash, water breathing, and so on. In turn, these abilities let you reach areas you couldn’t previously, necessitating a lot of backtracking to find new paths in places you’ve been before. Shortcuts and teleportation devices keep the tedium of backtracking to a minimum, allowing you to focus on the search for new rooms and items. In short, it’s typical Metroidvania stuff.

Where Mystik Belle differs is in its use of item-based puzzles. Most Metroidvanias put a focus on action, with plenty of platforming, environmental puzzles, and tough enemies to take down. This game has these too, but they take a back-seat to the sort of item puzzles that you typically see in point and click adventure games. Finding items, combining them to get new items, and finding the right place to use them is the main form of obstacle that Mystik Belle presents.

Here’s an example. You need a metal cog to fix a machine, so you need some scrap metal you can melt in a forge and a mold to shape the cog. The metal comes from ruining a few other tools (like a flimsy saw) as a result of earlier puzzles,which you’ll probably already have at this point. For use mold, you need to find a sturdy box, fill it with sand, and then find the two halves of the old, broken cog to create an imprint. Finally, with all those pieces in tow, you can head to the forge and make your cog. 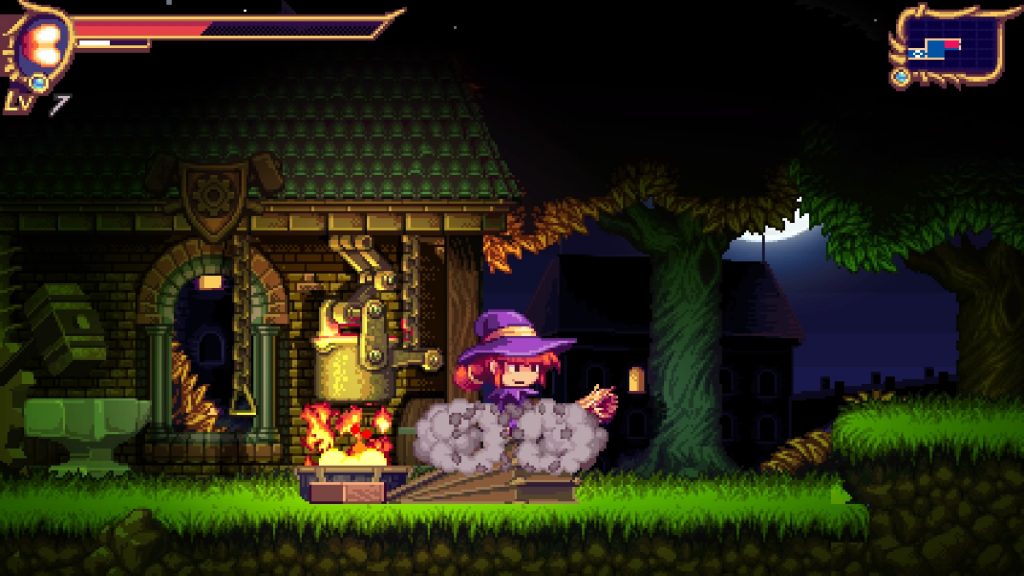 Mystik Belle is full of such puzzles, so how much enjoyment you get out of the game will depend on how much you like them. It can involve a lot of trial and error and abstract logic, and if you find that frustrating, Mystik Belle’s going to try your patience—that was certainly the case for me.

Even so, it’s worth enduring a bit of frustration (or using a guide), because Hagmore is a joy to explore. The map layout, though not as complex as more “serious” Metroidvanias, still has that satisfying loop of finding and exploring new areas, looking for shortcuts back to places you’ve been before, and mapping out an intricate, connected maze in the process. From its trap-filled detention dungeon to a sleepy neighbouring village, from its cramped dorms to its cavernous library, every corner of the school and its surrounds is brought to life with beautiful, detailed pixel art.

Indeed, its art direction is one of Mystik Belle’s most stunning qualities. The game echoes the style of games seen towards the end of the Super Famicom’s life, like Seiken Densetsu 3 and Star Ocean, with big, detailed sprites and earthy colours. It doesn’t shy away from bright colours—Belle herself wears rich purple robes, and there are lots of flashy magic effects and such—but the overall colourscape is a more grounded one than you often see in pixel-art games. I really like it. Belle is a likeable and relatable hero. She’s something of an outcast, and if magic schools have cliques (which I’m sure they do), she doesn’t seem like she’d really fit into any of them. She’s a pretty average student with pretty average grades, and though she’s not a delinquent, she seems to rub most teachers the wrong way. At the same time, she’s friendly, charming, and humorously annoyed by her situation. Mystik Belle’s story is simple, but Belle brings a lot of personality to the adventure.

The more Metroidvanias on the better, as far as I’m concerned, and Mystik Belle is a welcome addition to the PlayStation 4 and Xbox One libraries. It’s an adorable game that calls to mind a particular slice of the Super Famicom era with its detailed pixel art, and Hagmore School of Magic is a joy to explore. Heavy use of adventure game-style item puzzles won’t sit well with everyone and can get tedious, but it’s worth pushing through to see all that Mystik Belle has to offer.

Mystik Belle is developed by Last Dimension and published by WayForward. It’s available now for PlayStation 4 (reviewed), Xbox One, and PC.