Matterfall is the latest example of Housemarque’s mastery of twin-stick shooters, this time combined with platformer mechanics – and it works wonders.

Housemarque has earned a reputation as one of the finest developers of twin-stick shooters, and rightfully so. They’ve got this classic genre down to a fine art, making games that are mechanically simple but full of depth, challenge, and excitement, with flawless controls, stunning visuals, and pumping soundtracks. The Housemarque formula that’s familiar and timeless.

That’s not to say the Finnish studio doesn’t innovate, though. Case in point: its latest outing, Matterfall. This is a classic Housemarque twin-stick shooter in every way, but this time there’s a heavy dose of platformer thrown in, creating a game that feels fresh despite its familiarity.

The basic idea is simple: you run, jump, and dash your way around each level, shooting enemies and leaping over obstacles along the way. The level design isn’t anything special as far as platformers go, but there’s a neat gimmick in the form of matter manipulation. Certain platforms are made of the creatively-named Blue Matter, and you can air-dash through these to reach places you wouldn’t be able to with jumping alone. In many cases, there’s only an outline showing where these platforms should be, but you can bring them to life for a few seconds with a handy matter manipulation gun. Blue Matter has the added benefit of blocking enemies’ bullets but letting your own shots pass through, making them vital in dealing with the hordes of enemies that you encounter. This is something you’ll be most welcome for, because Matterfall doesn’t hold back when it comes to throwing assailants at you. This is every bit a shooter as it is a platformer, with complex enemy patterns and bullet hell mazes to navigate; this all plays out with the elegant simplicity of the standard twin-stick shooter setup: left stick to move your character, right stick to aim and fire your weapon.

The shooter side of Matterfall is as good as any other Housemarque game, and the platformer side works well too, but it’s the way the two genres blend together that sets the game apart. As I said before, Blue Matter platforms are vital in both traversal and combat, but this goes for the level design in general – using the geometry of the map to protect yourself and hinder enemies’ movements plays a big part in overcoming the challenges before you.

The air-dash move also doubles as a fundamental combat skill, because it destroys enemy projectiles and stuns any foes you hit. The value of negating bullets speaks for itself, and is often the only way to safely get through a section of the map. If being temporarily disabled isn’t enough, stunned enemies also take extra damage and give a great deal more points when killed. Basically, the aim is to stun enemies as frequently as possible, for your own safety and for your high scores. To facilitate all this, Matterfall employs a unique control scheme with jump and dash on the R1 and L1 buttons respectively. Jumping with a shoulder button seems odd at first, given that X (or its equivalent) has been a genre standard for decades, but this setup means you can shoot and jump at the same time. You never need to take your thumb off the trigger to hit the jump button or dash button, or vice versa.

There’s a story around all this, but it’s there solely to frame the action of the game. Matterfall takes place in a distant future where people have ignorantly harnessed an alien technology known as “smart matter”. That’s all well and good until a virus starts to spread throughout this smart matter, corrupting it and turning it against humanity. As an elite soldier who’s able to wield smart matter for good rather than evil, if it’s up to you to save Fortuna City from the corruption. 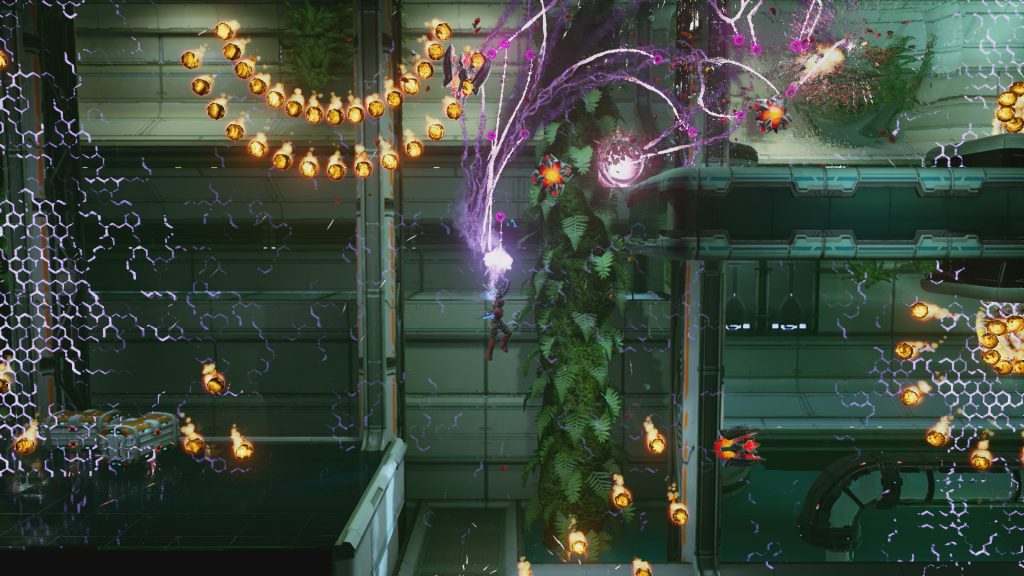 It’s not a tale that’s going to win any awards, but it doesn’t need to be – this isn’t a game you’ll play for its storytelling. No, Matterfall  is a game you play for intense, exciting, adrenaline-fuelled shooting, and the way it cleverly weaves platformer mechanics into all that. Housemarque is unrivalled when it comes to twin-stick shooters, and Matterfall is one of their best games yet.

Matterfall is developed by Housemarque and published by Sony Interactive Entertainment. It’s available now for PlayStation 4.