Last month, long-time RPG developers Obsidian Entertainment released Pillars of Eternity, to widespread acclaim. To call it highly anticipated would be an understatement – is a game that raised just shy of $4 million USD on Kickstarter, with more than 70,000 backers – and by all accounts, it lives up to that anticipation.

However, this wildly successful launch was marred by controversy, when a particularly tasteless, transmisogynistic “joke” was discovered within the game. As part of the game’s Kickstarter campaign, backers within a certain tier ($500 or more pledged, specifically) could have their name and a personal message included in the game in the form of a memorial stone. Here’s one such charming message: 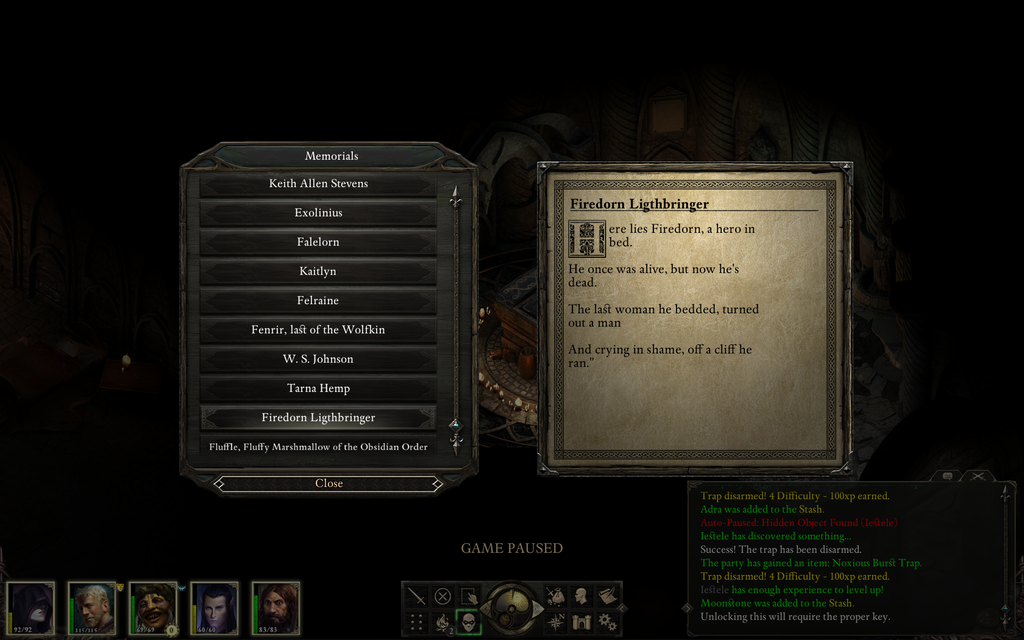 The “joke” here, of course, is that this Firedorn Lightbringer was so upset at having slept with a transwoman, that he had no choice but to kill himself. It shouldn’t need explaining why this is wildly transmysognistic and harmful, but the internet has been awash with the usual “it’s just a joke”, “lighten up”, “I don’t see what the problem is,” so here goes nothing:

This memorial stone quite blatantly implies that sleeping with a trans* person is embarrassing, something to be so ashamed of that the guy in question would rather take his own life than live with the knowledge that he slept with a trans woman. It buys into the bullshit narrative that trans* people are deceitful, that the go out and “trap” unsuspecting, helpless cis people and trick them into sex. This is blatantly, overtly dehumanising. Exactly the kind of dehumanising that leads to trans people having a 41% attempted suicide rate, that leads to 50% of trans* people being raped or assaulted by a romantic partner, that leads to a staggering 80% of trans* students feeling unsafe at school. Transmisogyny is most definitely not “just a joke.”

To their credit, in the wake of the controversy, Obsidian changed the the memorial in question, in consultation with the backer who submitted the original poem. Here’s what they came up with: Now, at least the transphobia is gone. But this replacement text shows that they still – even after all the discussion – can’t see what the problem was, and removing the original was a PR stunt rather than any kind of effort to make amends. “It was just a joke,” the new memorial text implies, none-too-subtly. “Lighten up.”

Adding insult to injury, at no point in all their discussion, Obsidian have never apologised. They’ve admitted fault, attributing the original text’s making it into the game to its slipping through the cracks of the vetting process for backer-submitted content. But they’ve never said the words “we’re sorry,” “we apologise,” or even the backhanded “we’re sorry that you’re offended”. Not in their official statement, not in an interview with Polygon, not anywhere that I’ve seen.

It’s not good enough. The original “joke” was bad enough, but Obsidian’s handling of the controversy has been pathetic, and only added insult to injury. There’s no indication that they’ve actually learned anything, that they understand the issue at hand. Just mindless efforts to appease the “vocal minority” speaking up. I honestly don’t think the original text missed out on the usual vetting process, as Obsidian claims. I think it went through that fine – the developers just didn’t see it as a problem.

What Obsidian ought to do is, first and foremost, apologise. These things happen – they’re horrible, and in an ideal world they wouldn’t happen, but they do – and Obsidian needs to own the fact that they fucked up, and offer a heartfelt apology. Then, they need to remove the memorial from the game entirely. The backer has had two options to deliver a poem that’s not awful, and has failed miserably both times. They’ve squandered their opportunity.

I really, sincerely hope they do this. In every other aspect, Pillars of Eternity looks like a wonderful game, and one that I’d enjoy immensely. But I don’ think I can bring myself to give money to a developer who, at least thus far, has shown such callous disregard for one of society’s most marginalised groups.