The PlayStation Vita is a great console for fans of yuri (lesbian romance) games – at least, in Japan it is. In the West, yuri is flourishing on PC, but options for Vita owners have been limited, despite the success of heterosexual-oriented romance games like Hakuoki and Code: Realize. Fortunately for us, the good people at Degica saw fit to localise the Vita version Nurse Love Addiction after the positive reception of its PC counterpart. Not only do we finally have an English yuri visual novel on Vita, but it’s a damn good one – it’s cute beyond words, well-written, full of surprises, and with gorgeous art.

Nurse Love Addiction follows Asuka Osachi, the self-proclaimed “president of the Jellyfish Club” because of her tendency to aimlessly float through life like a jellyfish floats through water. After graduating from high school with no plans for the future, she decided to join Teito Nursing Academy, inspired solely but a note written in a book from a childhood: “I want to become a nurse.” She doesn’t remember much from her childhood, so she doesn’t remember why she wanted to become a nurse, but at least it’s something.

She’s joined at the academy by her younger sister, Nao, whom Asuka refers to as her “miracle drug”. Nao goes to great lengths to take care of Asuka – cooking for her, waking her up in the morning, helping her study – and she even chose to join Teito as well so that Asuka wouldn’t be alone. Although Nao’s younger by almost a full year, they’re both in the same school year, and they went through all their schooling together. On her first day, Asuka meets a few other people who will end up changing her life in some way or another. Kaede Ohara is her homeroom teacher and role model, a nurse Asuka refers to as “the angel in white” due to her beauty and the care she has for her students and patients. Sakuya Takeda and Itsuki Amato are a power couple: both drop-dead gorgeous, and admired by every other girl in school. Sakuya’s very formal and brisk, coming from a high-class family, while Itsuki is fun, carefree, and enjoys teasing Asuka.

Nurse Love Addiction is, primarily, a coming of age story for Asuka, as she tries to figure out who she is: does she even want to become a nurse, and if so, why? What happened in her childhood that she can’t remember? What is love, and with whom is she destined to be with?

As you might have guessed, these four women represent the main four routes through the game. The choices you make determine the direction the story takes, and who she ends up falling in love with. (And yes, one of the options is her little sister, but – mild spoiler that’s heavily hinted at all the way through – they’re not biologically related.) Make the right decisions, and you’ll get a good ending and a happily ever after with your chosen sweetheart. Don’t and you’ll get a “bad” ending – which range from tragic to bittersweet to downright creepy. It’s very typical visual novel stuff. 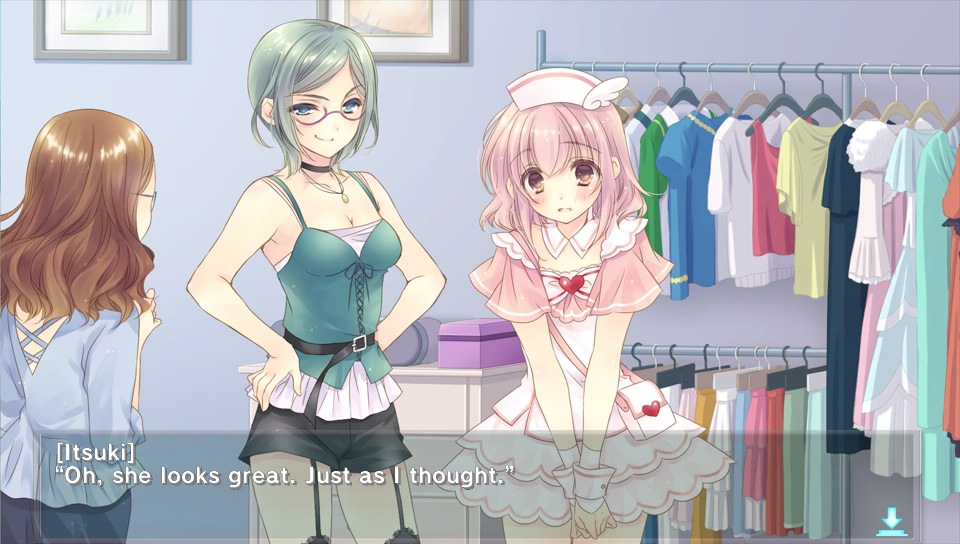 Like many an otome game, playing a single route may lead to a satisfying conclusion, but you have to play them all to get the full ending. This is something that Nurse Love Addiction does better than most, because with the exception of Kaede (I’ll get to her in a minute), the routes are all very closely intertwined. I don’t want to give too much away, but I’ll say that Asuka, Nao, Itsuki, and Sakuya have quite a history together, even though Asuka doesn’t remember it at first. Each route fills in different pieces of this puzzle, weaving a story that’s by turns charming, sweet, bleak, and twisted. For the first half or so of its run Nurse Love Addiction is a saccharine, ridiculously cute story of youthful romance, but then it warps itself into a tale of murder, conspiracies, magic. Yet somehow, it doesn’t lose its sweet, heartfelt core through all of that, and shocking as some of the routes may be, they’re still adorable.

Kaede’s route, however, is a bit divorced from all this, to the point that she almost feels like an afterthought. The other three routes are all intertwined, but Kaede stands apart from all that. Moreover, her route lacks all those uncanny developments, and is more of a straight, “pure” romance story (though Kaede’s bad ending in particular is anything but pure). This isn’t a criticism by any means – if anything, Kaede’s route is my favourite because it’s just so sickeningly sweet (and who doesn’t love a good teacher-student romance?). It’s just a bit odd that it’s so detached from the others, when they’re all so closely tied together.

Tying all these stories together is some absolutely beautiful artwork. It makes heavy use of a pastel palette, creating a softer touch than the usual bold colours that you often see in anime games. Character designs are relatively simple, but with a wealth of personality that comes through the costume designs and expressive faces. It’s all very sugar-coated and sweet, underscoring the many cute moments in the game and making the shocking twists stand out all the more by contrast. The writing, too, fits this approach to presentation. The English script is excellent, with a natural feel and none of the stiltedness that you often get in localisations. The translation team has also done a fantastic job when it comes to adapting the humour and personality inherent in the Japanese dialogue, which makes the whole game a joy to read. It makes smart use of things like text-based emoji and bracketed emotion descriptors; these are things that often just get in the way of the story being told and make it awkward to read, but here, they fit the tone well, and are used just sparingly enough to work wonders.

I really hope that Nurse Love Addiction does well, because it really deserves some attention. Vita may be a dying platform, but it’s perfect for visual novels, and this one is up there with the best of them. Here’s hoping it also encourages localisation houses to take more risks with yuri games in the future, because as niche as the genre is, it’s one that deserves a lot more attention in the West than it gets, especially for console releases.