Less than two months ago, I had next to no interest in baseball beyond an (admittedly unsubstantiated) opinion that it was a better bat-and-ball game than cricket. Then, something happened. On April 2, two new games were added to the PlayStation Store. Well, more than two games were added, but there were two that were particularly pertinent: Super Mega Baseball, and MLB 15 The Show. 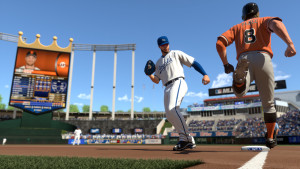 When review copies for both came my way, I gladly accepted – even if it’s not something I had an active interest in, baseball is so ingrained in popular culture thanks to the influence of American media, I thought it was worth taking a look at.

A month and a half later, I’ve signed up to MLB.tv and watching a game is my go-to option for unwinding after work. I have a favourite team (the Orioles) and a favourite player (Adam Jones). I know what things like RBIs, batting averages, and breaking balls are. I’m even making plans to catch a game and eat all the Dodger Dogs my stomach can handle next time in in Los Angeles.

While it was Super Mega Baseball that got me hooked on the sport itself and schooled me in its deep, riveting strategy (you can see more in my review for NZGamer.com), it was MLB 15 The Show that turned that into an obsession with Major League Baseball. 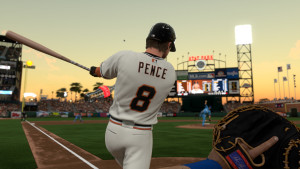 For the most part, MLB 15 The Show is a sports sim like any other – there’s a Franchise Mode, a career more where you take an up-and-coming ball player from the draft through to the bigs, and a “dream match” type mode where you use collectible cards to create your own team of current and retired players. But it’s the little touches that set MLB 15 The Show apart from the likes of EA Sports and 2K Sports games.

In a very welcome move, Franchise Mode lets you play as more than one team, if you want. There’s no reason why you shouldn’t be able to follow more than one team, but it’s something I’d never even thought about before The Show. It also nicely ties into the real MLB competition; you can easily check MLB scores and highlights from the Franchise menu, and any strange events – like the Orioles playing in front of an empty stadium due to the protests in Baltimore – find themselves recreated in the game. Playing a particular game in the season, while watching the very same game live on another screen (which, I should point out, isn’t a function of The Show) is particularly entertaining and just a little bit surreal. 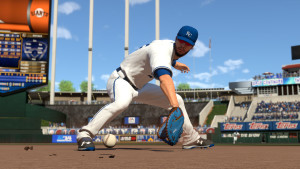 Road to the Show is a great simulation of what I imagine the real-life career progression of a ball player to be like. A pre-draft camp gives you a chance to show your stuff, and then you get drafted. (And if you’re unlucky like me, you get picked up by your most hated team. Fucking Red Sox.) Then you work your way through the minor leagues until, eventually, you earn a spot on the roster or a Major League team.

It’s not all that different to what other sports sims offer, and it lacks the off-field antics of NBA 2K, but it’s still a great way to take a more personal approach to the game. Being able to skip even the simulated plays (just letting everything happen off-screen) and focus on your own time on the field keeps things moving. Unless you’re playing a pitcher, a Road to the Show game only takes 10 or 15 minutes, compared to the hour or so you can expect to spend in other modes where you play the full team. 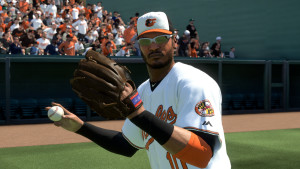 All the solid simulation elements are moot if the ballgame itself is no good, but fortunately, that’s not the case with The Show. The controls and interface may not be quite as intuitive and easy to adapt to as Super Mega Baseball, but they’re still a more-than-competent recreation of real-life baseball. It helps that baseball is a fairly simple game, on a mechanical level; the basics of batting and pitching are very easy to pick up, even if mastering them can be trick. I still struggle to time swings just right, and chase balls that I shouldn’t – but it’s those mind games, that battle between pitcher and batter, that makes baseball so exciting.

Other aspects of the game are a bit more complicated. Catching flyers isn’t too much of an issue, but deciding what to do afterwards – which base to throw to, when there are a few runners on – is something I can’t seem to wrap my head around. And stealing? Well, I’ve never successfully stolen a base to date, so I pretty much just play Gentlemen’s Rules at this point. No stealing allowed. 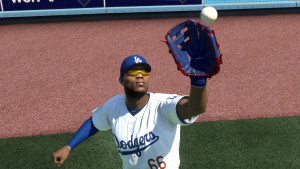 Accurately recreating players and stadiums is always of high importance in a sports sim, and The Show doesn’t falter – this is one of the best looking games I’ve played. Ballparks are meticulously recreated, and players are near-perfect recreations of their real-life counterparts, even managing to avoid the uncanny valley that so commonly plagues the genre.

The only real downside is that a lack of local players means that finding online games in New Zealand can be a chore, and decent quality ones even more-so.  That said, as someone who only plays games online in rare circumstances, I personally couldn’t care less. The game also suffers from the loading time woes that are so common in this genre but no nearly to the same extent as other games.

When it comes to sports sims, they don’t get better than MLB 15 The Show. If you have any interest in baseball, this is a game you’ll want to try. And if you don’t? Take Super Mega Baseball for a spin. It’ll change your mind for sure, and The Show will still be here waiting for you.

MLB 15 The Show is developed by Sony San Diego and published by Sony Computer Entertainment. It came out for PlayStation 4, PlayStation 3, and PlayStation Vita on April 2, 2015.