I can’t remember the last time I played a game with as much commitment to a central idea as Life Goes On: Done to Death. This is a game with a devilishly simple core hook, but the way every single other aspect of the game ties into it makes this a remarkably coherent, impressive, and downright hilarious game.

Said hook is thus: it’s a puzzle platformer, but the only way to get through each level is to die, often repeatedly, and always in hilarious fashion. The corpses you leave behind then help you progress, acting as platforms over spike pits, conduits in electrical machinery, weights to keep buttons pressed down, and so on.

As simple as idea is, it never gets boring because there’s a constant stream of new mechanics being introduced from start to finish. The first level is, quite literally, a single spike pit that’s just too far to jump, so you have to put a body in the middle somewhere to be a platform. By the end of the game, you’ll be using corpses as conduits in multi-faceted contraptions, turning them into zombies and herding them to where you need them to be, freezing them to make ice blocks that you can ride, putting them in cannons and shooting them across the stage… the list goes on.

What’s remarkable about this is that, even with so many different additions to that core system over its course, there’s never that sense of being overwhelmed by information or options. This is one of the best examples that I’ve seen of a difficulty curve and a game teaching you its mechanics through sharp level design.

Take the first level, for example. The solution is obvious if you’ve seen any trailers for Life Goes On, or even if you’re just familiar with the concept, but should you have no idea whatsoever, the answer quickly becomes apparent. There’s only one way forward, and it’s across the spike pit – so you try jump across, fail because it’s too far, but then see the corpse there kindly providing you a platform. The next level adds just a bit more complexity, and then more, and then more still, until it’s time to introduce a new idea and begin that process once again. It’s this carefully-balanced difficulty curve that means that Life Goes On is constantly challenging you, but without ever throwing up a seemingly insurmountable roadblock, and that’s a rarity, especially in puzzle games. 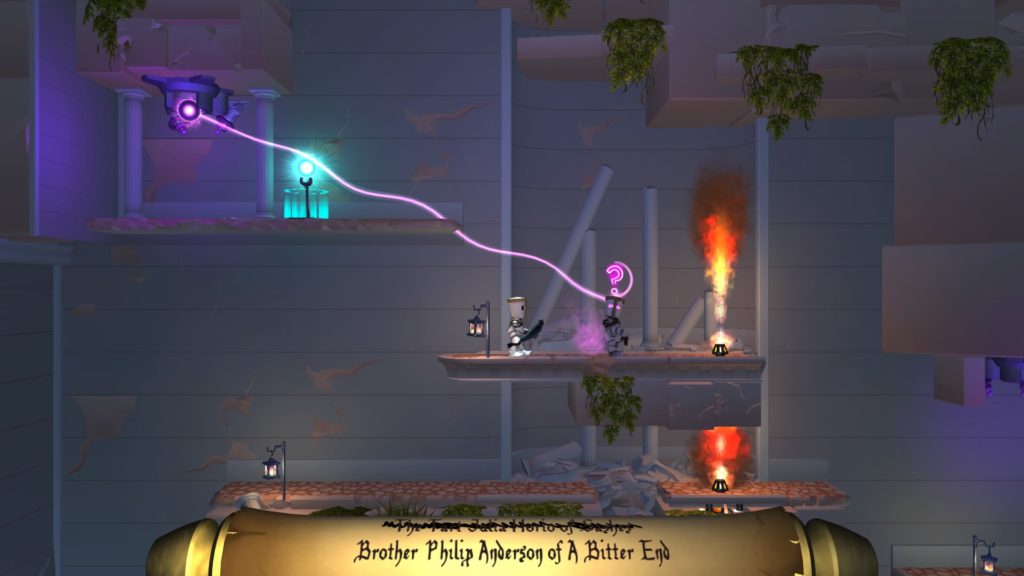 As clever and captivating as the levels are, it’s the way that everything else underscores the premise that makes Life Goes On so much more than “just” a clever puzzle game. The story is just the right amount of ludicrous – a king has decided he wants the Cup of Life, but he’s too lazy to go look for it himself, so he sends out his army of knights, one at a time, to die in search of the treasure.

With each level comes a new Cup, but never the Cup of Life. The Cup of Better Naps, perhaps, or the Troll-y Grail. As the game goes on, and the knights grow increasingly weary of their plight, the cups start to take a darker turn that, given the context, is even funnier. The Cup of Ennui. The Cup of Unjustified Suffering. The Goblet of Schadenfreude.

Upon completion of each level, a mission clear screen reminds you of just how hollow your victory is, as your surviving knight wheels the dead away and the big, bold “VICTORY” written across the screen is annotated with slightly less victorious addendums. “VICTORY… you monster.” “The HR department would like a word with you about your VICTORY.” “In retrospect, I’m not sure how we called that VICTORY.” 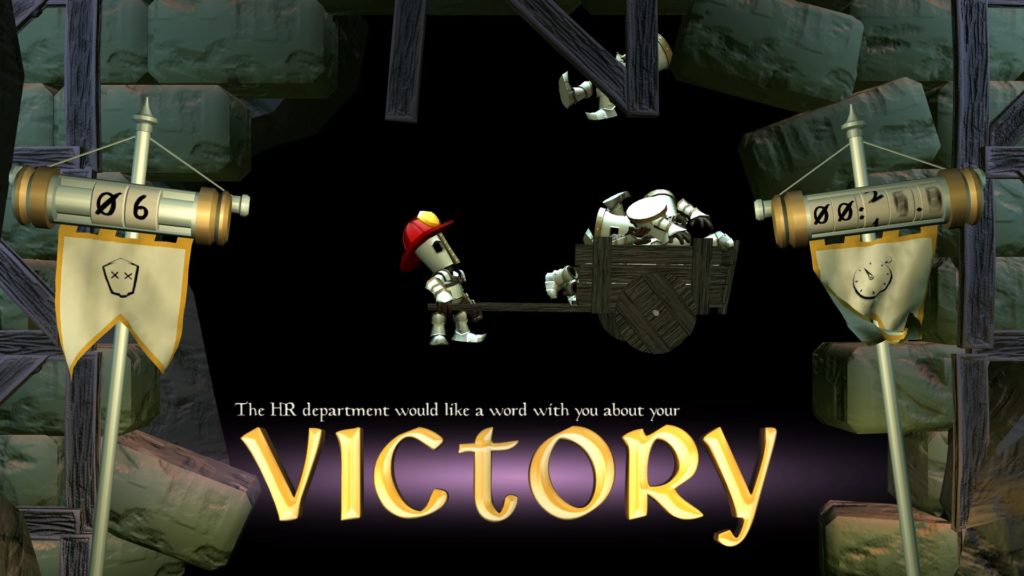 Despite effectively being clones, the knights manage to take on personalities of their own that make their deaths that much more hilarious. Each knight has a randomly-assigned name displayed on a scroll at the bottom of the screen, ranging from “Prince Ashley Walker of Skull Mountain, Wizard” to “Simon”. Each death means a name hastily crossed out, and the scroll unravelling a bit more to reveal the next knight.

Initially, the knights will just look like your standard cartoony tin-can footsoldiers, but as you make your way through the game and complete objectives, you’ll earn hats and weapons that will randomly be applied to spawning knights. Some of these are setting-appropriate helmets and swords, but in most cases, they lean toward the absurd (did you expect anything else, at this point?) – a spatula, a pope hat, a shovel.

The best part about these collectibles is that they do nothing whatsoever beyond changes knights’ appearance. In a game as humorously nihilistic as this, upgrades that don’t actually upgrade anything seem particularly pointed, not to mention the welcome critique of modern games’ obsession with “RPG mechanics”. They come with great flavour text, too, like the Pirate Hat: “The skull and crossbones motif seemed relevant.” 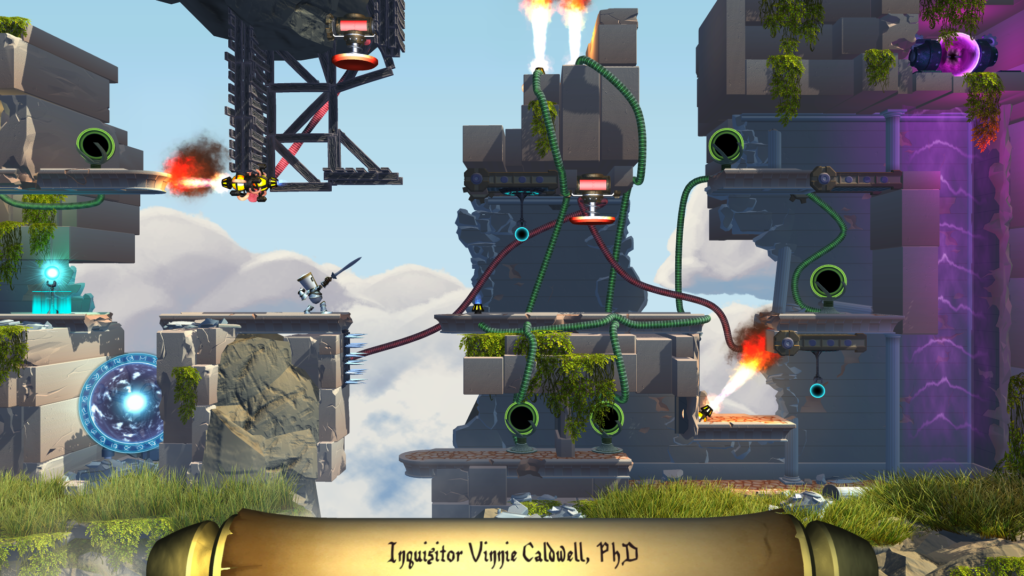 Each death also means the delightful sounds of dying treasure hunters pouring forth from your controller (assuming you’re playing on PS4, as I did), which isn’t something I ever expected I’d be typing. The death sounds are as morbidly comic as the rest of the game, and there’s impressive variety among them – people providing the screams and cries make up one of the largest sections of the game’s credits.

And oh, the credits! Life Goes On has the best staff roll I have ever seen in a game, and it’s just the perfect way to close out a fantastic game. I won’t say any more, because it’s so out of left field that it’s best left for you to discover on your own, but suffice to say that a new bar has been set.

Life Goes On: Done to Death is a game that everybody should play – at least, everybody who enjoys fun. I can’t recommend it highly enough.

Life Goes On: Done to Death is developed and published by Infinite Monkey, and is available now for PlayStation 4 and PC.

A press copy was supplied by Infinite Monkey for this review.