LEGO Worlds has (almost) all the fun and excitement of playing with LEGO, and none of the limitations that come with the real-life, physical toys.

I need to get something out in the open: I don’t really like Minecraft. I like the idea of Minecraft, and I think it’s a brilliant game, and one of the most important games of a generation for a bunch of reasons. I can certainly see the appeal, but I’ve tried time and again to get into it, and it never managed to get its hooks into me. I just don’t have the kind of architectural, spatial creativity that it demands, so every attempt to play involves building a house, then a tower, and then getting bored.

By that logic, I probably shouldn’t love LEGO Worlds, but here we are. It may seem superficial – and I guess it is, really – but the LEGO aesthetic is enough for me to rediscover that childhood joy of building things with blocks. I made a house, I made a tower, and then I kept playing. That may seem like a low bar, but given my experiences with Minecraft, it’s a huge achievement for this game.

It’s not fair to simply compare LEGO Worlds to Minecraft, though. The former clearly draws heavy inspiration from the latter (just as Minecraft was inspired by LEGO), but LEGO Worlds is very much its own beast. 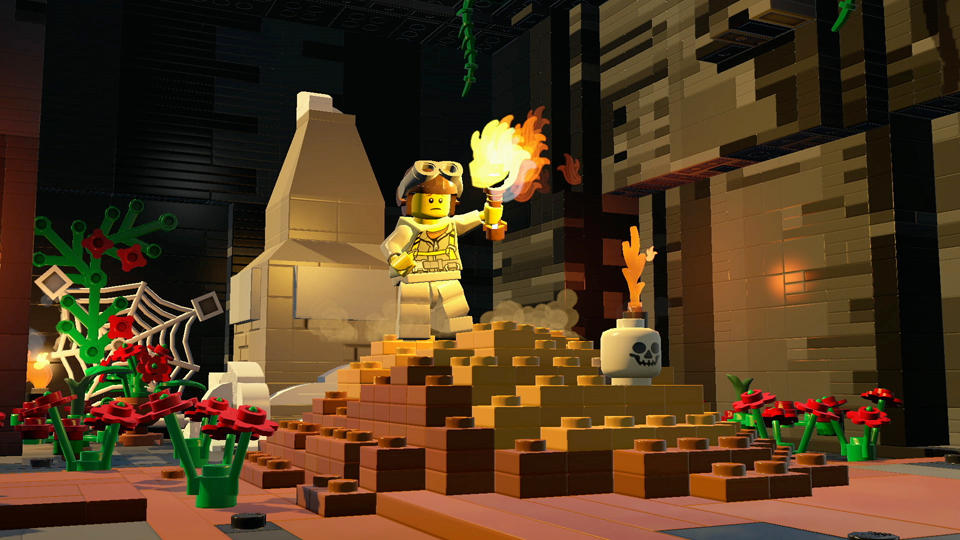 There’s a vague narrative context that sees you, an aspiring Master Builder, hopping from world to procedurally-generated world in search of treasure and prestige. Initially, you can only access small worlds and a handful of biomes, but by helping locals, exploring, and flexing those creative muscles, you’re able to upgrade your spaceship. This, in turn, opens the way to bigger worlds with more environmental variation, until you eventually hit Master Builder and can freely create to your heart’s content.

It’s a simple concept, but it’s a fantastic way of slowly introducing LEGO Worlds’ impressive suite of tools, one brick at a time. There’s a brief tutorial that goes over the specifics of how to use each tool, but the bulk of the game involves honing those skills by applying them. Quests are typically designed around a specific tool – an NPC’s friend is stuck on an island in the middle of a pool of lava, so you need to use the landscaping tool to create a bridge, for example. You don’t necessarily need to do things the suggested way, of course, but that’s the path of least resistance and its a great way to get more familiar with the tools at your disposal.

The gadgets themselves give you plenty to work with. Obviously, you can build stuff brick-by-brick in true LEGO fashion – and I’ll get to that in a moment – but the rest of the toolbox is there to help streamline the process so you can focus on the creative element. The Landscape Tool lets you raise and lower sections of land, and can also just add and remove big chunks in a variety of shapes. It can also flatten a big section of land in one fell swoop, easily creating a platform on which to build. 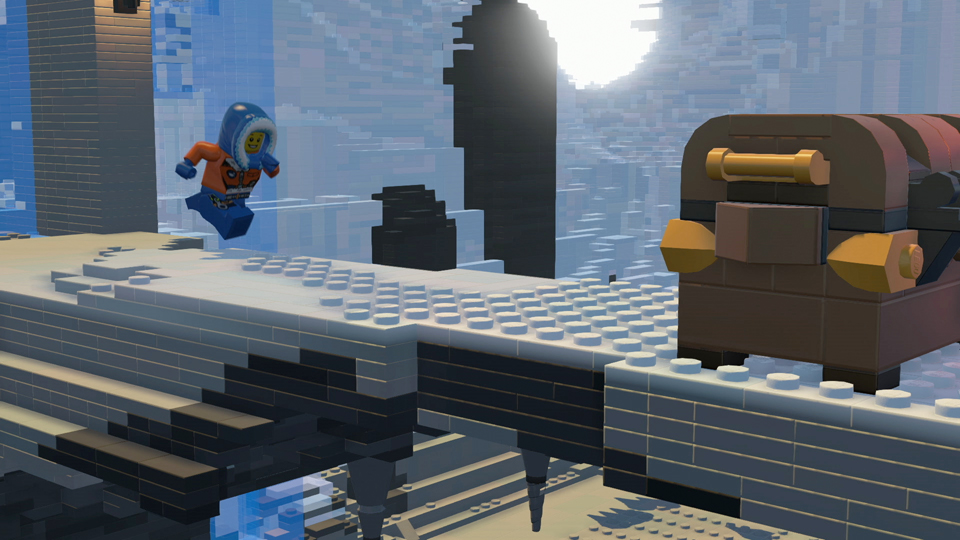 The Discovery Tool lets you scan and record all sorts of LEGO objects, and then place duplicates of them when and where you please. You can also clone more complex structures with the Copy Tool, as well as saving those for later use, and you can even download other players’ custom builds. The paint tool, naturally, lets you recolour things, but can also be used to change the type of material something’s made of – for example, painting a lava effect onto a piece of land to create a lava pool.

The real star of the show, of course, is the Build Tool. This is what lets you place specific bricks in specific places to create whatever your imagination can dream up, and it’s here where LEGO Worlds is the most authentic LEGO game TT Game has produced. At the heart of LEGO is the simple act of clipping two bricks together, and then adding another, and another, until you’ve get to some magnificent end result, and LEGO Worlds gets that spot on, right down to the clicking sound of bricks snapping into place. Obviously, it doesn’t have the tactile element, and I’d be remiss if I didn’t say it feels slightly odd to build LEGO without that, but VR technology is long way from making that possible in a video game.

The trade off is that LEGO Worlds has none of the limitations of physical LEGO. There’s no need to worry about structural integrity of your creations – though, in practice, I’m still mindful of bonding in my digital brickwork, despite it not being needed. You can build unwieldy monstrosities that would never stand up in real life, and you can build things that hover in mid-air. You can even place multiple bricks in the same physical space, which may seem a bit odd, even within a video game, but it really just opens the door to more creativity. You have unlimited bricks at your disposal, they never get too stuck to pry apart, and – perhaps the most important thing – virtual LEGO bricks can’t be stood on. 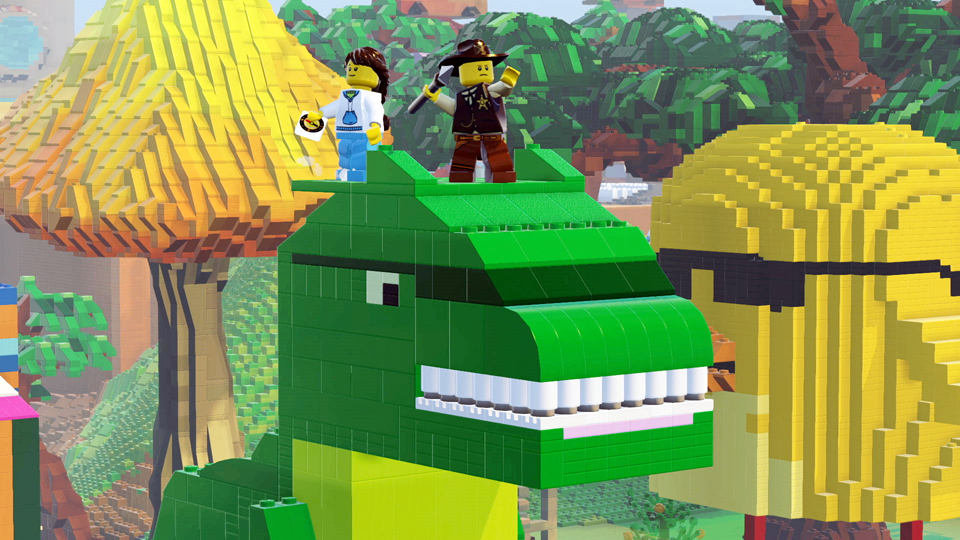 That said, I wish there was a little bit of focus on instructed builds. I know people like to rail against the prescriptiveness of building to instructions, but I love that at least as much as just building freely. LEGO Worlds has a lot of these “brick builds” to find, but doing so gives you the full, completed objects to place and use as pieces in your own designs; that’s certainly welcome, but I’d love if this game had the option of building those yourself per on-screen instructions. That said, it’s not hard to find instructions online, and then use the Build Tool to create them.

LEGO has a lengthy history that’s seen a lot of different sets, and almost all of them – licensed ones like Star Wars notwithstanding – are present and accounted for in LEGO Worlds. That means there’s plenty of variety in bricks, biomes, objects, and Minifigures, spanning everything from LEGO City, to Mixels, to new stuff created just for this game. Though the worlds themselves are themed, you can mix and match any bricks and objects you’ve found however you please. For anyone who grew up playing with LEGO, there’s a lot of nostalgia inherent in the older sets, too; I know that playing with LEGO Pirates stuff brought plenty of lovely childhood memories rushing to the surface.

That gets to the heart of what makes LEGO Worlds such a great game, even in a sea of Minecraft clones: it really captures the joy of playing with LEGO. There’s a that nostalgic element for older builders, but what sets it apart is how well it recreates the experience of building LEGO in a digital space, without any of the limitations of the physical world. I don’t think it’ll eclipse real-world LEGO at all – the tactile element is far too important – but it’s a perfect companion that I can’t recommend highly enough.

LEGO Worlds is developed by TT Games and published by Warner Bros. Interactive Entertainment. It’s available now for PlayStation 4, Xbox One, and PC.

A PS4 press copy was supplied by Warner Bros for this review.