As much as I love Samurai Shodown, the premier samurai-themed fighting game, to me, has always been The Last Blade 2. When it first caught my attention back in the early 2000s, it was the Bakumatsu setting that really grabbed me. It’s a period of history that I was fascinated by at the time, and being able to play a fighting game that was not only set then but let me play as a member of the Shinsengumi was like a dream come true.

Revisiting it now, when my Bakumatsu / Shinsengumi fascination has waned somewhat, I can appreciate The Last Blade 2 for what it really is: a remarkable fighting game that pushed boundaries, that has aged surprisingly well, and that captures the artistry of swordplay better than perhaps any other game.

The Last Blade series is something of a follow-up to Samurai Shodown, and as such, it carries a lot of DNA from SNK’s earlier sword-fighting franchise. These are 2D versus fighting games, but ones that are much slower and more deliberate than other games of its time. There’s less focus on aggressive rushdown and high/low mixups, and more on spacing, footsies, and finding and creating openings for big, powerful strikes. This much is true of Samurai Shodown, but The Last Blade went one further with the introduction of the deflect mechanic: a button specifically for parrying, which can lead to big openings for attack, but also leave you vulnerable if poorly timed. 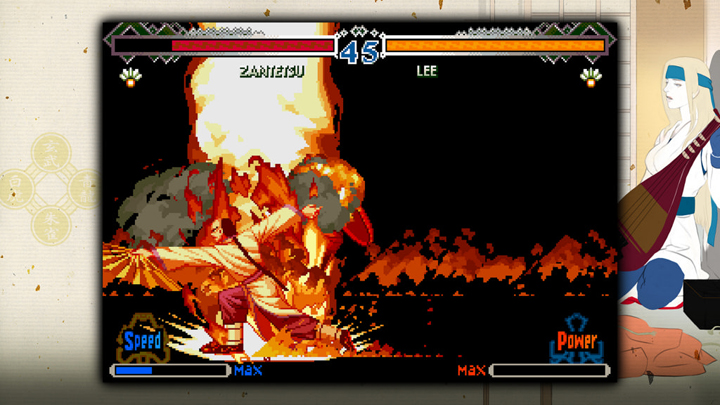 The generally slow nature of The Last Blade’s attacks means that having a strike repelled is a very real possibility at all times, and it can be the thing that stops momentum dead in its tracks or that turns a round on the verge of being lost into a victory. If you’re watching high-level Last Blade play, you probably won’t see a whole lot of deflects like you would parries in Street Fighter III. That doesn’t mean it’s inconsequential as a tool—quite the opposite, in fact. The risk that comes with a poorly-timed deflect is huge, so it’s not something that is actually used often, but the possibility that it could be used is something that has to be respected at all times.

When The Last Blade first came out in 1997, there wasn’t really anything quite like the deflect system. Street Fighter III had parries, but the relatively low risk of using them meant they were functionally very different; if anything, they facilitated an aggressive approach by giving you a means of covering your approach. Since then, we’ve seen functionally similar mechanics in a lot of fighting games, like Street Fighter IV’s Focus Attacks, Guilty Gear XX Accent Core’s Slash Backs, and SoulCalibur’s Guard Impacts. 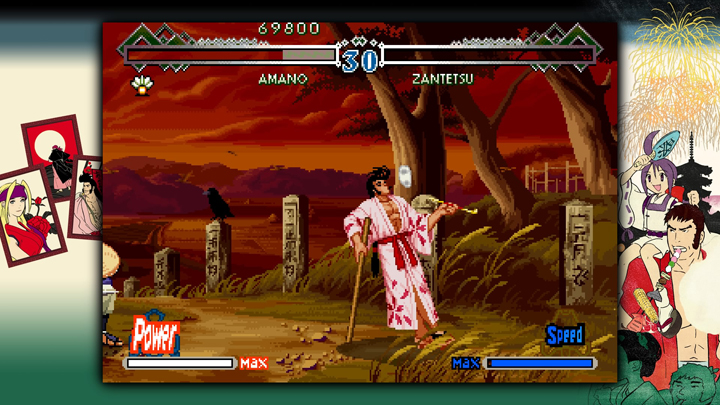 That isn’t to say that there is no rushdown in The Last Blade. It has the same archetypes across its roster as any fighting game, including more aggressive combatants. Furthermore, each character has a choice between “Power” and “Speed” mode, the latter catering more to a combo-heavy approach. Still, you don’t really see the kind of aggression that you’d see from, say Street Fighter’s Ken or Cammy. Even with one of the more aggressive characters, The Last Blade and The Last Blade 2 are slow deliberate games were footsies and poking are king.

That may seem boring, especially today, when “anime fighters” like Guilty Gear abound. But The Last Blade 2 in particular, with its expanded roster and refined mechanics, remains a fascinating game that still manages to stand out even in the sea of bombast that is the modern day fighting genre. That it still has a competition presence in 2016 is testament to how robust a game it is—not a huge presence, of course, and almost exclusively in Japan, but it’s still there nonetheless.

Even from a non-competitive standpoint, The Last Blade 2 is remarkable. Coming in late in the Neo Geo’s life, it’s one of the system’s most beautiful games, second only to Garou: Mark of the Wolves when it comes to pristine, detailed sprites and backgrounds. Even some 18 years on, it still looks incredibly good—to the point that I eschew all the various filters and presentation styles offered by the PS4 release, and just run the game in all its original, pixelated glory. Good 2D game assets are timeless, and this game is proof of that.

The Last Blade 2 isn’t as colourful as, say, Samurai Shodown, but the game is anything but dull. Much like the real-life Bakumatsu period, the game’s setting is bleak and sombre, and the muted colouring gives the game an appropriately haunting feel. A battle-worn harbour reeks of pointless destruction. A windswept graveyard, backed by a red dusk sky, is oppressively desolate. Even the relatively lively battlefields, like a sakura-laden city street, have an air of sadness about them, with the stark pink of the blooming flowers highlighting the despair as much as they offer refuge from it. There’s a plot here, but honestly, it plays second fiddle to the stories that emerge through the simple act of playing the game. Between the pristine sprites, fluid animations, gorgeous backgrounds, and balletic back-and-forth of the combat itself, The Last Blade 2 is like a painting in motion. Or, rather, thousands of paintings—one for each duel between players, be they side by side on an arcade cabinet or playing online thousands of miles apart. Each one with a story to tell.

Just as, of the thousands of stories written in blood during the Bakumatsu period, few will ever be told, most of The Last Blade 2’s stories will be taken to the grave by those who wrote them. This is, of course, true of any fighting game—indeed, of any competitive pursuit—but few, if any, capture this sombre reality as beautifully or as gracefully as The Last Blade 2.

The Last Blade 2 is developed by SNK and Code Mystics, and published by SNK. It’s available now for PlayStation 4, Xbox One, and PC.

It was purchased on PS4 by Shindig for this review.