A little while ago, an animation popped up in my Twitter feed that captivated me. It was a simple loop, showing a group of fireflies flitting around a shrine in the forest, but it was mesmerising. I soon learned about the game it came from: Miyamori, an action-adventure platformer that aims to capture the beauty if Akita prefecture in northern Japan.

Set in a small Japanese town, Miyamori follows Suzume’s efforts to find her brother, Toshiki, who’s mysteriously vanished. Her search brings her into contact with Izuna, one of the two guardian foxes of a local shrine, and the pair decide to work together in their search for Toshiki, as well as the other fox, Gedo, who’s also vanished.

Miyamori‘s developer, Joshua Hurd, went to Akita on a university exchange and fell in love with the local culture and folklore. As a result, he began work on the game, drawing further inspiration from the likes of Okami and Japanese poet Kenji Miyazawa. Hurd plans to take Miyamori to Kickstarter soon, ahead of a targeted release some time next year, and he was kind enough to take some time to answer a few questions about the project.

Let’s start with a little bit of scene-setting: what is it that you’re trying to achieve with Miyamori?

Miyamori is about reimagining Japanese folktales and creating a detailed, changing world to explore. I really want to capture the feeling of living in a rural town in northern Japan, but with an added element of the supernatural, to imbue it with a sort of magic realism feel.

Miyamori is described as an action-adventure platformer, but that’s a broad genre. Can you share a bit about the game design philosophy behind it, and how the different mechanics – shapeshifting, yokai abilities, dialogue choices, and so on – will come together?

Initially, the idea was to tell Miyamori’s story with a mix of platforming action and adventure gameplay, using gameplay styles to represent the spirit world and human world respectively. The shape-shifting and dialogue choices are built around letting you navigate through the community from different perspectives to shape the story.

If you’ve been following the project, you might know that a few weeks ago I decided to postpone the Kickstarter campaign. Part of that is because I’ve been refining exactly what I want to achieve with the game. I felt like there was kind of a gap between Miyamori’s action gameplay and its narrative sections, so I want to put gameplay first and make something that delivers on both with one core idea. I have to work through a couple more things before I share what that new direction is, but what I can say for now is that I’ll be putting more emphasis on exploration and the interactions with people and spirits! 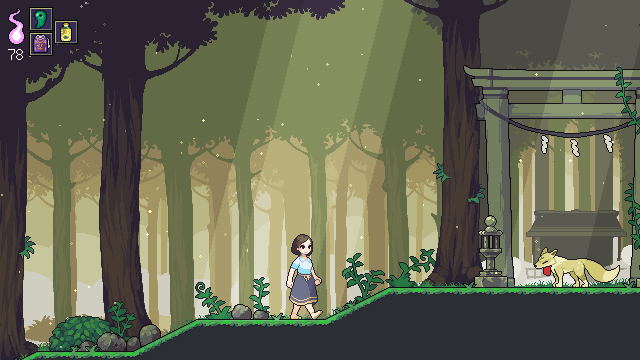 You’ve assembled a great art team. How did you find the right artists to bring your vision of Miyamori to life?

Thanks! It’s been really nice working with such talented artists. I think it was just a matter of finding artists that I felt shared similar tastes and had a style that would convey the right atmosphere for Miyamori. My own artistic skills are more on the musical side of things than visual, but many of the reference images are photos that I took while living in Akita. Those photos and some rough sketches are mainly how I’ve communicated my vision for Miyamori with the team. 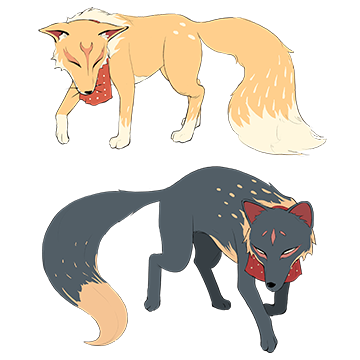 I really like the designs for Suzume, Izuna, and Gedo. Did you have any particular ideas for them to start, or did that come more from the artists?

I had a better sense about Suzume’s character than Izuna and Gedo, but most of the visual design is Kevin’s work. For Suzume, I put together a character summary and a sort of style guide for Kevin to work from. He worked out the details, came up with several versions, and we refined things from there. With Izuna and Gedo I also had character summaries, but left their design up to Kevin. I’m really happy with how they turned out.

How did you wind up in Akita, and how long were you there for? Have you been back since your first trip?

I spent about half a year in Akita on a university exchange in 2013, and went back for a week in the spring of 2015. My last visit was a little rushed, so hopefully I can visit again sometime in the next year or two!

What is it about that region that you fell in love with, and how are you planning on working that into the game?

Hmm… can I say “pretty much everything”? I spent hours just exploring as much as I could and it still felt like there was always something new to see. The autumn scenery was especially beautiful – plenty of golden rice fields and forests. It just felt like a really wholesome, refreshing place. Akita feels more relaxed and manageable than a metropolis like Tokyo; you get just the right balance between nature and urban space. I’m hoping that comes across in the level design of Miyamori. Also, the food is amazing. 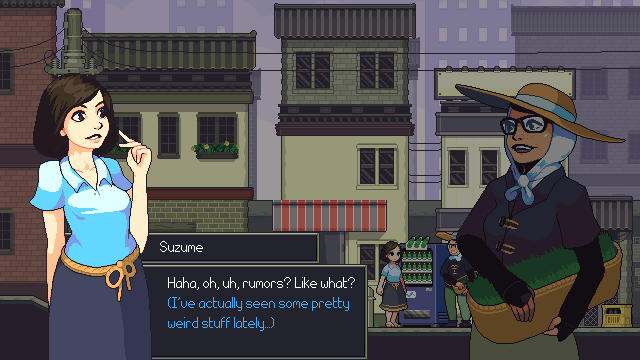 Miyamori is clearly a game that’s more rooted in Japanese culture than a lot of Western-developed games that use Japan as set dressing. How have you managed to authentically capture that, especially as someone who I understand didn’t grow up in Japan?

My interpretation of Japanese culture is never going to be the same as someone’s who’s grown up there, but I don’t think that’s necessarily a disadvantage. I think that distance allows me to have different insights on things. Anyways, even though I’m reinterpreting the culture to some degree, it’s important to me that it’s still a faithful and respectful representation.

What, if anything, are you doing to ensure it’s respectful and not appropriative, especially in light of “whitewashing” incidents like the Ghost in the Shell casting?

The people, places, and experiences in Miyamori are all rooted in Japanese culture, so to diverge from that would just feel wrong. There have been a few story points and gameplay elements that, after some deliberation, were tweaked to be more faithful to the culture and context; initially, the game was much more focused on the idea of kitsunetsuki, or fox possession, but I felt like it was a little too dark and might give the wrong impression for the kind of story I wanted to tell. One thing I did early on was to get feedback on the story from a Shinto priestess to make sure that I was on the right track. 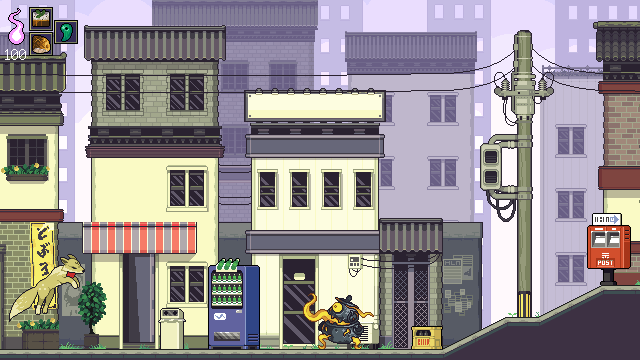 You’ve cited some great sources of inspiration, like Okami and the works of Miyazawa Kenji. What is it about these that you like, and how has that influenced Miyamori’s design?

I like the way that Okami reinterprets Shinto beliefs and mythology, and presents it in a new light. I’m trying to do the same kind of thing with Miyamori, but with more of a focus on Tohoku folktales. As for Miyazawa Kenji, I think his writing perfectly captures the spirit of Japan’s northern countryside. I suppose these sources of inspiration have mainly influenced the game’s presentation and atmosphere.

Is there anything else I haven’t asked you about that you want to share with our readers?

Hmm, not at the moment! I’ve been quiet about Miyamori for a little while now while I refine things, but I hope I’ll be able to share more on the new developments soon. Thanks!

Miyamori is currently planned for release on PC and Mac sometime in 2017. You can find out more on the game’s official website.