Horizon Zero Dawn is a remarkable achievement in world-building, but it undermines that with a weak story and too much open-world bloat.

If you want to get the most out of Horizon Zero Dawn, my advice is to avoid all main story content as long as possible. Just take every opportunity to explore, maybe do some side quests, and see all the beauty and wonder that the game’s world has to offer. This is Horizon at its best, most ambitious, and most exciting, and that’s something you want to keep alive as long as possible before letting the game’s cracks dull the experience.

Exploration and discovery in the post-post-apocalypse

Horizon Zero Dawn’s world is one of “post-post-apocalypse” – a marketing buzzword that nonetheless captures the spirit of the world design perfectly. Hundreds of years after some sort of cataclysmic event wiped out civilization, the world’s been reclaimed by nature and self-replicating robots. Humankind hangs on in primitive tribes, but this is a world that very much belongs to the machines.

This simple concept is envisioned wonderfully in the way the world is constructed, and that makes it a joy to explore and to simply exist in. The natural world is a thing of beauty (thanks in no small part to some amazing tech under the game’s hood), and the remnants of the “Old World” instill a sense of mystery.

There are “ancient” ruins to explore, immediately recognizable as office buildings, train stations, football stadiums, and the like despite centuries of corrosion and overgrowth. The huge buildings are obviously the most awe-inspiring things, but even the little, subtle touches, like roadside barriers barely visible beneath the vegetation, add to that sense of history. 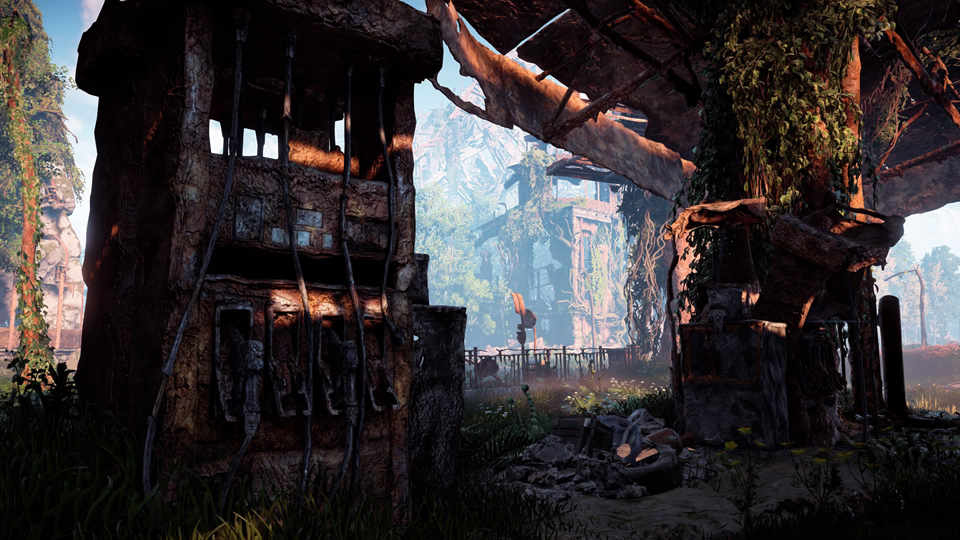 So too do the“ancient artifacts” you find along the way. There are coffee mugs adorned with corporate logos, necklaces, and digital watches, among other remnants of the Old World. They’re everyday things to us, in our place and time in the real world, but to the people of Horizon Zero Dawn, they’re mysterious relics of a time long forgotten.

It’s almost Tomb Raider-like in its cycle of exploration, survival, and discovery, but rather than a modern-day heroine digging up relics of our past, we’ve got someone hundreds of years into the future digging up artifacts of our present. It’s a fascinating perspective, imagining how future peoples – especially primitive peoples rebuilding after societal collapse – might view the minutiae of our everyday lives. A regular old digital watch is, to the people of Horizon Zero Dawn, an “Ancient Bright Bracelet”. 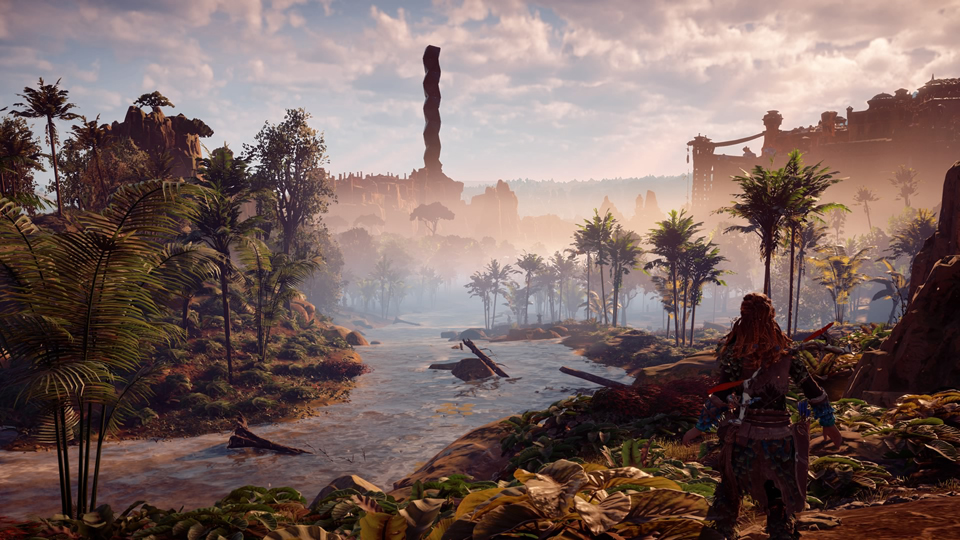 This is Horizon Zero Dawn at its best. There’s so much work put into creating a believable vision of this world, and every inch of it deserves to be seen, explored, and documented with the game’s excellent photo mode.

We’re going on a machine hunt

Horizon Zero Dawn’s wonders aren’t just ancient artifacts and natural wonder; there are also the animal-like machines that prowl the world. If discovery is where the game’s at its most breathtaking, hunting these monsters is where it’s at its most exciting.

Aloy is a killed hunter, armed with a wide range of tools that allow for a lot of creativity in combat. She’s got a few variations of her trusty bow, and a range of different ammunition types with varying effects. She’s got a ropecaster that can pin enemies to the ground and restrict their movement, and a tripcaster that can lay tripwire traps with ease. She’s got a sling for throwing bombs, traps that can be set on a whim, and environmental hazards that can be exploited. She can sneak through long grass, and use misdirection to set up stealth kills. 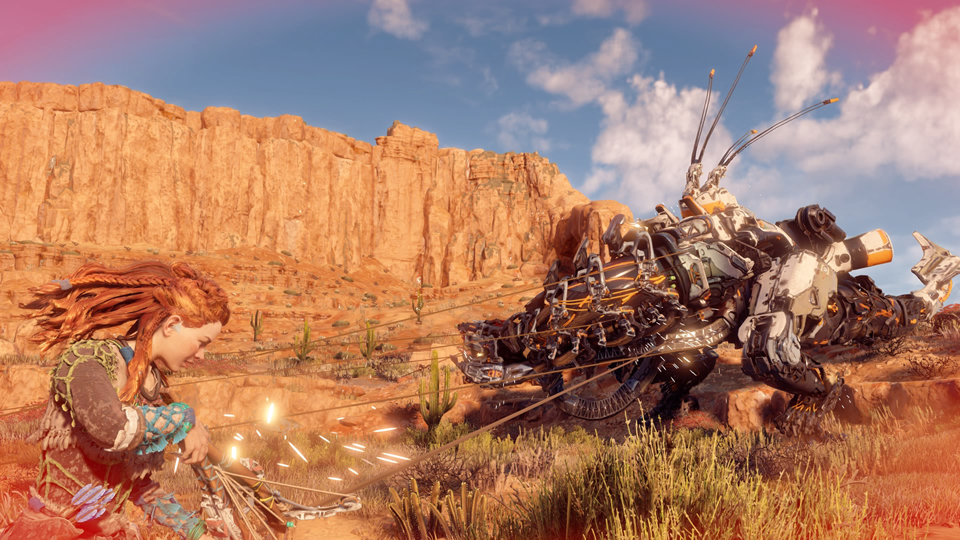 For their part, the machines all have their own tools, from simple headbutt attacks to rockets, lasers, and machine guns. Many are bulky and hard to take down, and the weaker ones tend to hunt in groups. They each have weak points, of course, and the game is all about finding the best way to use the tools at your disposal to exploit those weak points.

That kind of setup makes hunting in Horizon Zero Dawn is a rush, especially when you’re taking on a new machine for the first time. Creativity and adaptability are encouraged by the encounter design; it’s not a game where you can just sit back and rely on your one strategy to carry you all the way through. Each fight – especially with the bigger monsters – is a mammoth task, which really sells the idea of hunting, not just mindlessly killing foes because the game asked you to.

That said, there’s not much incentive to keep hunting after that you’ve killed a certain type of monster a couple of times. Machines drop components, which are used to craft ammunition, but all of Horizon’s metal monsters seem to be made of the same parts. There’s not much reason to farm dangerous Thunderjaws when you can get the same materials by going on a killing spree with weak Grazers. Sure, monsters have a few unique drops that can be traded for new equipment, but gear has a negligible impact in this game, and it usually only takes one or two kills to get everything you need that’s unique to a certain monster. 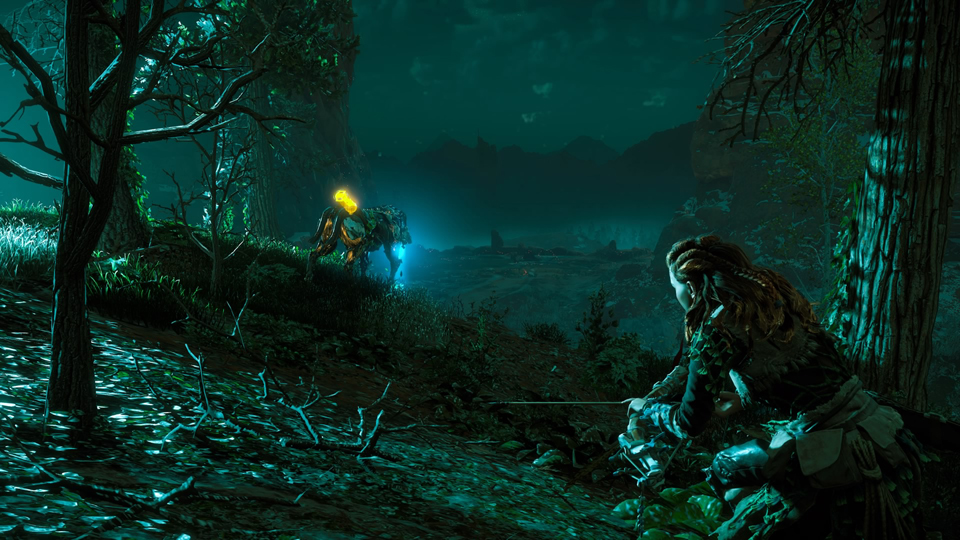 Still, hunting is its own reward, and when you need more, there are sidequests that push you to experiment with different weapons and tactical approaches. Hunting Grounds are a particular favourite of mine, in which you’re given specific challenges – like “Kill three machines using log traps” – to complete within a limited time.

What if humans are the real robots?

Were this Horizon limited to creative hunting and the wonder of exploration, it’d be a remarkable, fascinating game. Unfortunately, it constantly gets in its own way, and undermines its best qualities in favour of something generic and uninspired, to say the least.

The major offender here is the story. It shows a lot of promise early on, as we’re introduced to Aloy, a fierce hunter who’s been outcast since birth for reasons unknown to her. So she sets out to find out who she is and where she comes from… and it’s all downhill from there. 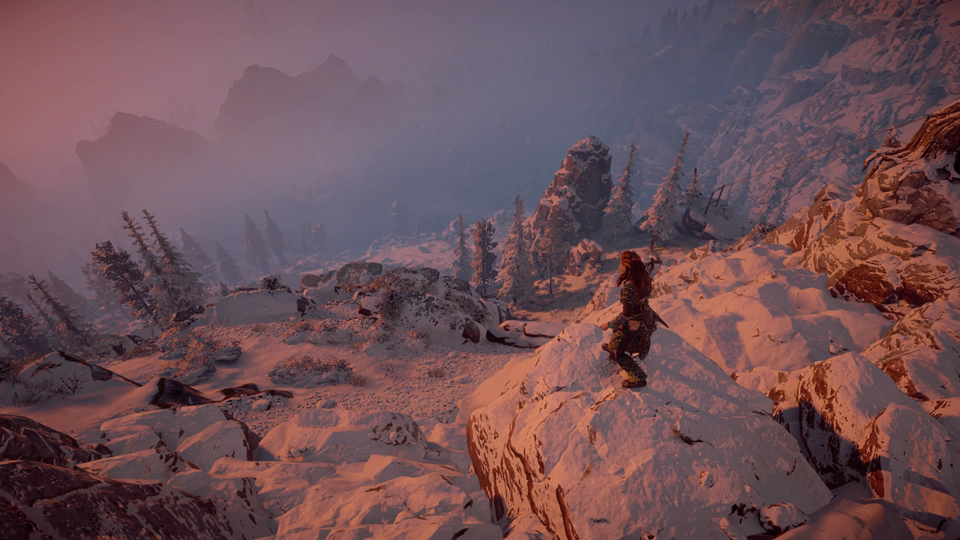 What transpires is a generic, dull piece of science fantasy with no emotion, no intrigue, no heart. That seemingly interesting premise is cast aside almost immediately in favour of a search for the truth about what happened to Earth, and it’s the most tired, shallow take I’ve seen on an idea that’s already been beaten to death. The great big mystery is exactly what you’d expect, and it’s delivered in the most tedious way possible – through the overwrought exposition of audio logs and holograms from the past. It’s formulaic, heavy handed with its exposition, all over the place in terms of pacing, and utterly boring.

The characters are similarly dull and lifeless, which is a real shame, given how much effort is put into their visual design. Aloy’s been a cornerstone of Horizon Zero Dawn’s marketing because she looks so cool and interesting, but none of that flows through to her writing. Despite a good performance from Ashly Burch, the character has all the personality of a fence post. Those early moments set up what should be a heartfelt coming off she story about a complex, empathetic hero, but then she just becomes a space marine in tribal garb.

The supporting characters are even worse, because they’re similarly lifeless but don’t have Aloy’s benefit of consulate screen presence. A handful of characters come and go throughout Aloy’s journey, but none are memorable, and most seem shoehorned in to give the story a veneer of complexity. 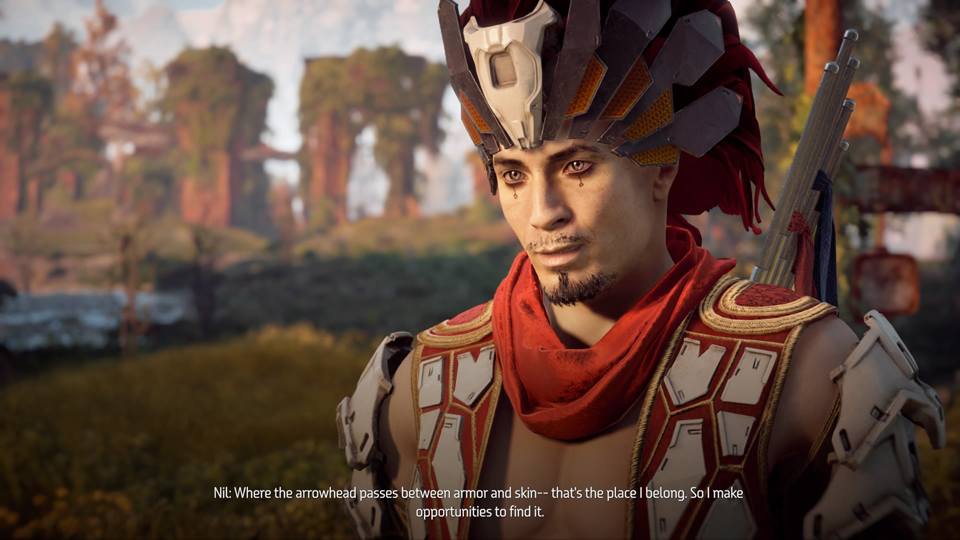 This is all disappointing, because the immaculate world of Horizon Zero Dawn deserves an appropriately meaningful narrative, but the real frustration is the way it undermines what the game does well. As I said before, this is a game that’s at its best when it lets revelling in exploration and discovery, but every story mission chips away at that foundation. The side effect of a plot that’s all about over-explaining how this world came to be is that it kills any sense of wonder by answering questions before you’ve even had a chance to ask them.

Early on, before things really get moving, the discovery of old husks of railgun-equipped tanks is invigorating, because it paints just enough of a picture to compel you to ponder what happened. Obviously, there was a cataclysm, most likely involving robots, and these old relics slowly hint at what might fill in the blanks. But as you go on, the story becomes solely about finding out what happened, in the most explicit, exposition-heavy way possible, sapping that curiosity. An old husk of a tank stops becoming a point of wonder, and starts just being an old tank from that old war between robots and people. 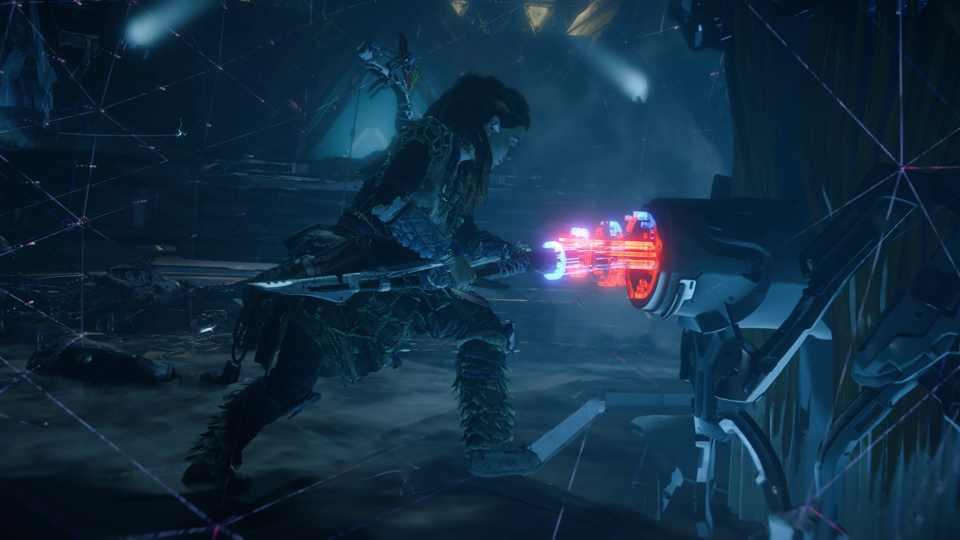 That’s made worse by story missions that insist on pulling you away from the grandiose world so you can explore weird dungeons that wear a generic sci-fi look and force you into firefights with dumb-as-bricks human enemies. You can’t take the “gritty” sci-fi shooter out of Guerrilla, I guess, not even with a world as full of beauty as this one.

When more is less

Horizon Zero Dawn also falls victim to the all too common problem of open-world bloat. Right from the outside, your map is covered with “points of interest”, and as you buy maps of collectibles and climb Tallnecks to scout new areas, it gets even more cluttered. There are side-quests of all manner, none of which are bad on their own right, but all of which contribute to an overwhelming busy-ness. It’s far too easy to miss the forest for the trees, and despite all the effort to build that sense of exploration, Horizon quickly devolves into a game of running from waypoint to waypoint, marking off goals on a checklist. That’s fun and all – lord knows the completionist in me is a sucker for an endless list of Things To Do – but again, it distracts from and undermines the best part of the game, which is that element of discovery.

There’s not really much reward for all this busywork, either, beyond a compulsive need to complete the tasks at hand. The banality of the story carries over to the sidequests as well, and more tangible rewards are negligible. Though it’s billed as an action RPG, the RPG elements in Horizon Zero Dawn are a very light touch. Levelling up gives you a slight health boost and a skill point to spend, but there’s none of the stat manegement or build customisation that makes an RPG tick. Gear is limited, and doesn’t have enough impact on anything to be worth seeking out. Aside from minor differences in stuff like elemental resistances, one set of armour is functionally the same as another. There’s a bit more variety in weapons, but still, not enough to really create that sense of character growth. 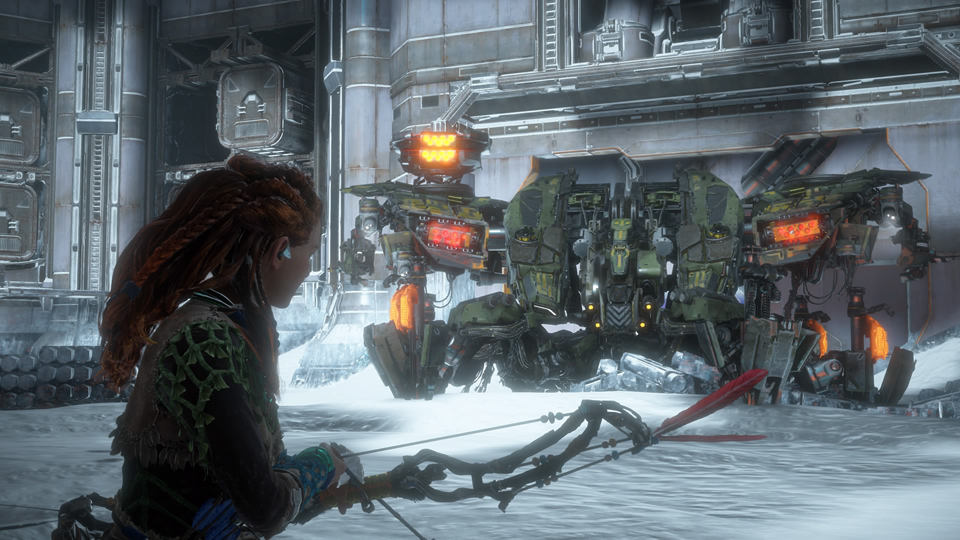 The end result is a beautiful game that’s full of ambition, that deserves to be one of the most remarkable games on PlayStation 4, but that’s let down by clinging too closely to a populist approach to game design. Had Horizon Zero Dawn avoided the need to try be all things to all people, and if they had better writers (and, ideally, writers who were involved right from the start), it could have been the game we all saw when it was first announced. Instead, it’s a fun, but ultimately forgettable action adventure romp.

Horizon Zero Dawn is developed by Guerrilla Games and published by Sony Interactive Entertainment. It’s due out on March 1 for PlayStation 4.

A press copy was supplied by Sony Interactive Entertainment for this review.