I always enjoy a good rogue-lite. I don’t much care for the more hardcore aspects of proper roguelikes, but I love the way games like Rogue Legacy and Children of Morta find a balance between the high stakes of permadeath and accessibility through meta progression systems. It’s into this camp that Xenon Valkyrie+ falls.

Framed within the context of a hunt for an evil witch, it sees you fighting your way through a hostile alien moon. Carelessness and bad luck mean death comes swiftly, and death means losing almost all character growth: any levels gained, stat boosts earned, money acquired, and equipment found. In most cases, any and all progression through the game’s handful of levels is lost as well. In other words, when you die, it’s back to the start of the game, at level 1, with your most basic weapons, no special items, and no money.

Related reading: Bard’s Gold is another simple rogue-lite platformer that’s worth a look, even if it’s a bit on the easy side.

However, what you do get to keep are any pieces of “teamerite” you’ve found—a rare ore that can be exchanged for various items at the base camp. For the most part, these come from defeating bosses, which drop anywhere from one to four pieces or ore (maybe more, but four’s the most I’ve seen), but if you’re lucky you can find them in chests as well. You’ll find yourself spending most of your teamerite to unlock powerful weapons, though you can’t use them immediately. Instead, unlocking a weapon means it gets added to the loot tables for any treasure chests you find in your adventures. 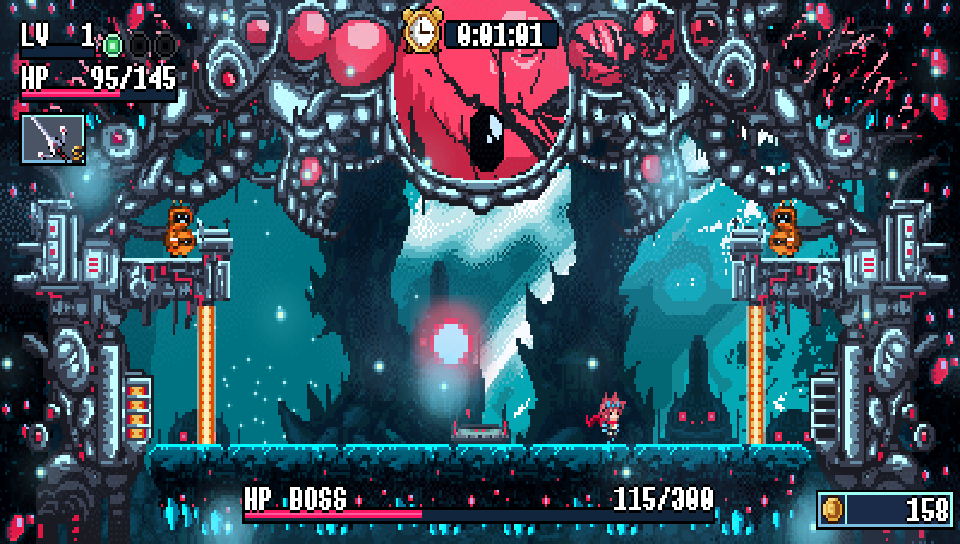 This gives Xenon Valkyrie+ a nifty set up where there’s no immediate, direct benefit for buying a new weapon, but without the massive risk that comes from spending a fortune on the best weapon you can, only to lose it halfway through the first level due to a dumb mistake. Instead, that tension comes when you get lucky enough to get a good sword or gun, which is usually the key to making a big push through to the later levels. Die stupidly after finding a really powerful weapon and you haven’t wasted your resources, but it’s no less discouraging.

On the other hand, the more weapons you purchase, the better your chances become of finding something good when you’re out in the field. As far as I can tell, all treasure chests in the game share the same loot table (except boss chests, which are their own thing), and all items have the same drop chance. As a result, the more good stuff you add to those loot tables—by purchasing them with teamerite—the higher your chances become of finding good weapons, and the stronger you become in an abstract sense.

You can also use teamerite, along with a few other items, to activate teleporters at certain points throughout the game. Once unlocked, you can teleport straight to that point from the start of the game, skipping a few stages so that you can make a bigger push to get to the next teleporter. The tradeoff is that you still start at level 1, while the enemies in those later levels are much stronger, because you’d normally be a much higher level at that point. At the same time, starting from a teleporter gives you a few extra stat points, and the level discrepancy means you level up much faster, so it’s potentially quite beneficial—so long as you can handle starting from that disadvantaged position. Finally, you can spend a few pieces of teamerite before a new run to buy an assistant robot. These come in a few varieties: there’s one that automatically attacks nearby enemies, one that sometimes restores health upon killing an enemy, and one that sometimes gives you some ammunition. They cost just a few pieces of ore each, but when you die, the robot dies too. Whatever you spent on it is lost, and if you want to buy another, you’ll have to cough up again.

All these different systems come together beautifully, giving you a lot of choices about what you do with your limited resources and how you approach each new run. Xenon Valkyrie+ doesn’t have your typical meta progression framework, but what it does have works wonders to create a subtle sense of development and incremental success, even in the face of repeated failure.

Beneath all that is the more traditional permadeath platformer experience. Each level is procedurally generated, but with the same elements, so as you learn the “rules” for each stage you’ll slowly get better at the game. In other words, though its layout will be randomised each time, the first level always includes the same sorts of enemies and hazards, so as you learn how to deal with those, you’ll become better at that part of the game even with its random elements. Each level has one treasure chest, containing either a sword or a gun (you can carry one of each), though there’s no guarantee it will be better than what you’re currently holding. 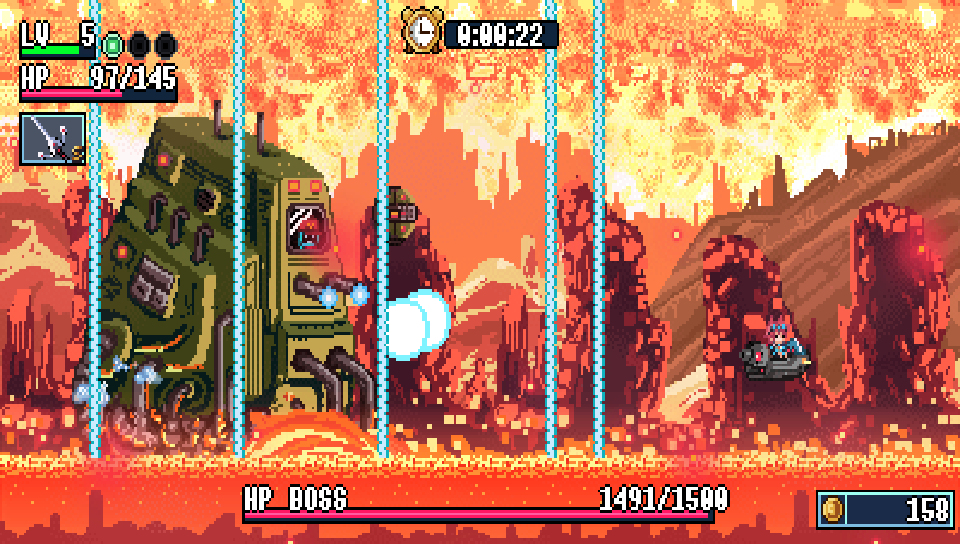 At the end of each level is a rest area where you can buy up to three randomised consumables—usually some combination of health recovery, ammo, and shield. These all cost “cells”, which are Xenon Valkyrie+‘s main form of currency, dropped by defeated enemies or destroyed crates throughout each level. How much you earn varies widely depending on a range of factors, so sometimes you’ll have enough to buy whatever you please, and other times you’ll have nothing.

At these rest areas, you can also spend stat points gained from levelling up, in order to increase your max HP, strength, defence, and/or max ammo, though how you upgrade will depend largely on your luck with treasure chests. Sometimes there are NPCs who’ll give you stat-boosting accessories if you fulfill certain conditions, like getting to the end of the previous level with your shield intact.

After every second level there’s a boss, with one of two possible encounters for each boss level—for example, the first boss is always either Omega Zero or the Reaper. Though they’re visually impressive, most of the fights themselves leave something to be desired; they tend to rely on simple attack patterns that are easy to figure out and avoid, even on the first attempt. If anything, they offer a bit of a break from the proc-gen threats of the rest of Xenon Valkyrie+, giving you a chance to just take it easy with a scripted fight before going back out into the wilderness. That’s not necessarily a bad thing, but it does seem to contradict the role that bosses usually play in games. 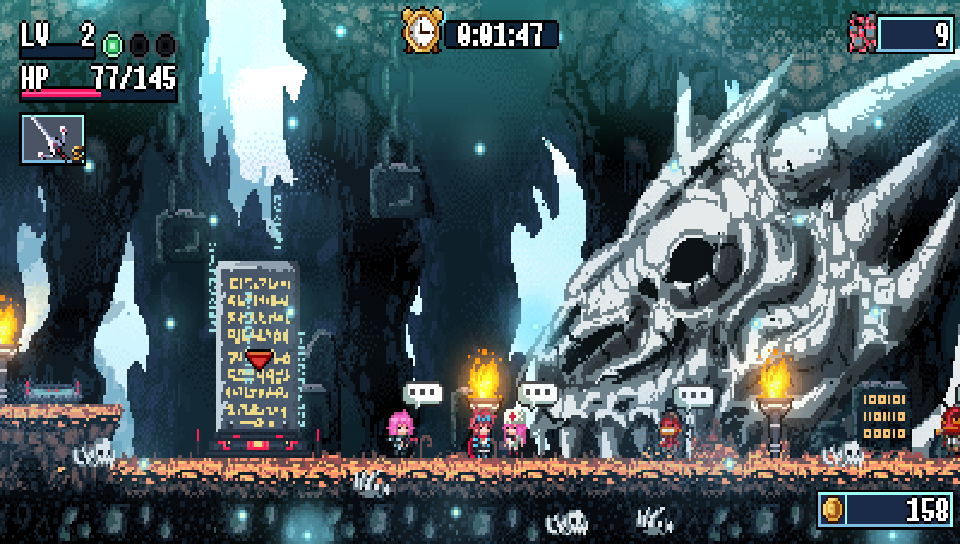 The story wrapped around all this is rather forgettable, even with a few different endings available. It’s all there in the premise: you’re hunting an evil witch on an alien moon, and there’s not much more to it than that. That said, the detailed pixel art does bring the game’s world and hostile environs to life beautifully, creating a foreboding sense of atmosphere that follows your every step. Roguelikes aren’t known for their deep, complex stories, and Xenon Valkyrie+ is no exception.

Even so, it’s a game that I find myself coming back to over and over again. It’s a game that’s easy to pick up and play in short bursts—making it a perfect fit for PS Vita—but it’s also easy to lose many hours as you try again and again, hopefully getting further each time.