I’m not sure how to feel about this trend of porting mobile games to home consoles. I love mobile games, don’t get me wrong—this isn’t some sort of tired “mobile games aren’t real games” nonsense—but mobile is a very different environment with very different strengths. Most phone games tend to have short, simple game loops ideal for playing in short bursts. Small screens and battery concerns encourage creative art direction over sheer technical prowess and photorealism. For better or worse, the mobile market lean heavily on free-to-play monetisation models, making it easy to dip your toes in and see if a game fits.

These things don’t often translate well to consoles. Typically longer play sessions demand deeper gameplay and more involved storytelling. More console power and bigger screens allow for and encourage more detail in graphics and presentation, and more immersive and sensory experiences. I wouldn’t want to play Uncharted or Tomb Raider on my phone, nor would I want to play Candy Crush or Final Fantasy Record Keeper on a console; they’re different games for different moods and different contexts of play.

World of Warriors brings that difference into sharp relief. As a mobile game, it works fine. It’s a straightforward arena combat game, with a focus on getting you in and out of the action quickly; you can easily squeeze in a match or two in those moments of downtime. Its simple, cartoon visuals are nothing special, but they look fine on screen in the palm of your hand. Microtransactions and a loot box mechanic for obtaining new characters aren’t great, but they don’t feel as exploitative as such systems often do. 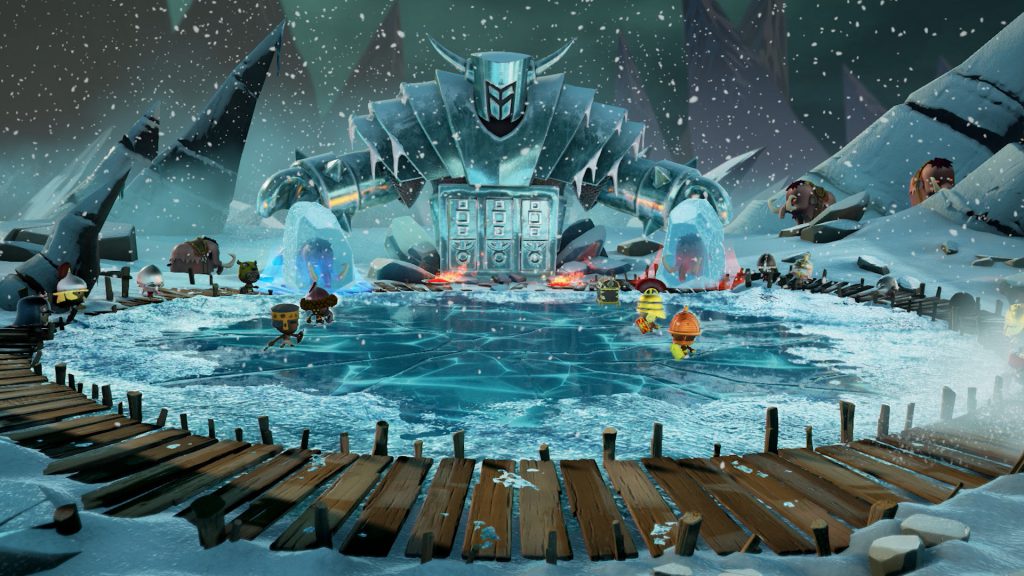 Move all that to PS4 though, and the cracks start to show. Combat is very shallow, with few tactical options and little moveset variety between characters: hammer away on your standard attack string, throw out a special move when it’s charged up, with very little attention paid to what the enemies are doing. There’s none of the depth, none of tactical complexity, and none of the mind-games that make arena games tick.

That’s fine when you’re playing a few minutes here and there as a way of passing the time on a bus ride. But when you actually sit down to play World of Warriors for any substantial amount of time, and give it the full attention you’d usually give to a console game, it quickly becomes repetitive and tedious.

There’s very little narrative to give your attention to, either; just a brief, flimsy backstory that establishes why warriors from different historical settings are suddenly all fighting amongst each other: they’re summoned through time and space for mysterious reasons. The singleplayer game is simply a series of fights across a handful of different arenas, with nothing to connect them. Each zone ends with a boss fight, which is pretty much the same as any other fight but against sturdier, harder-hitting foes. 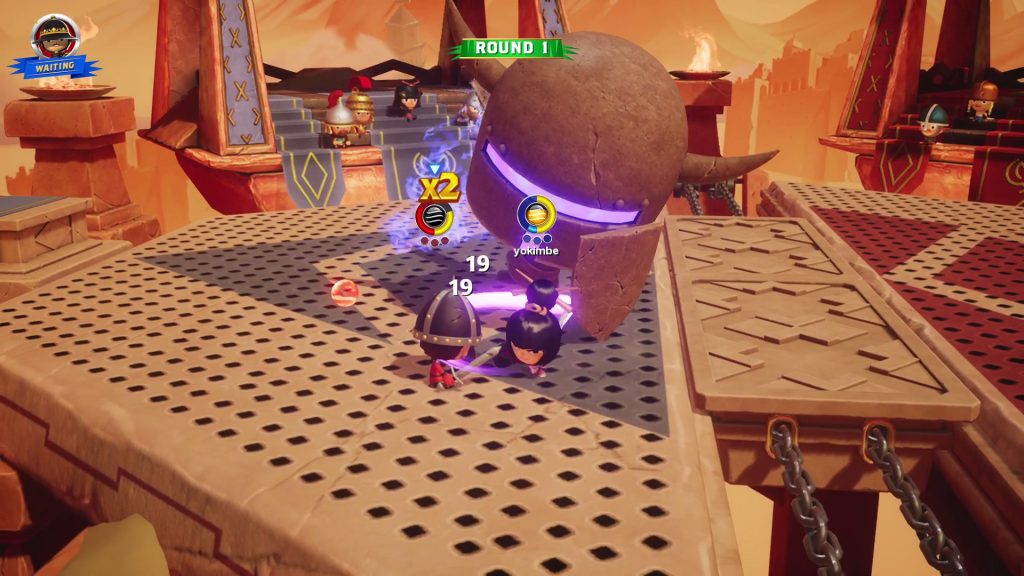 There’s a handful of different arenas with various traps, but they do little to mix up the repetitive combat that drives World of Warriors, beyond simply limiting the space you can safely use. Characters don’t really have the tools to force opponents into traps or otherwise create any sort of strategic advantage; they’re just there, as something to be vaguely mindful of. The few different games mode don’t offer much variation, either; whether you’re fighting one vs one, two vs two, or in a four-player free-for-all, the combat and limited tactics don’t change at all.

You unlock new characters through a lucky dip system. The PS4 version has been stripped off its microtransactions—you simply earn what was premium currency through play—but even without the monetary component, “gacha” is an annoying way to build up your roster: grind for currency, go summon a new character, most likely get one you don’t like, and then do it all again. And even with microtransactions themselves removed, you’re still left full of progression systems that were designed around such a payment model: grind to level up your characters; grind to evolve characters; grind after grind after unsatisfying, unfulfilling grind.

To make things worse, the characters are utterly forgettable. For all their exploitativeness, gacha systems usually at least have the excitement of drawing some impressive, sought-after character. The roster in World of Warriors, though, is so bland that it’s hard to care, let alone get excited. 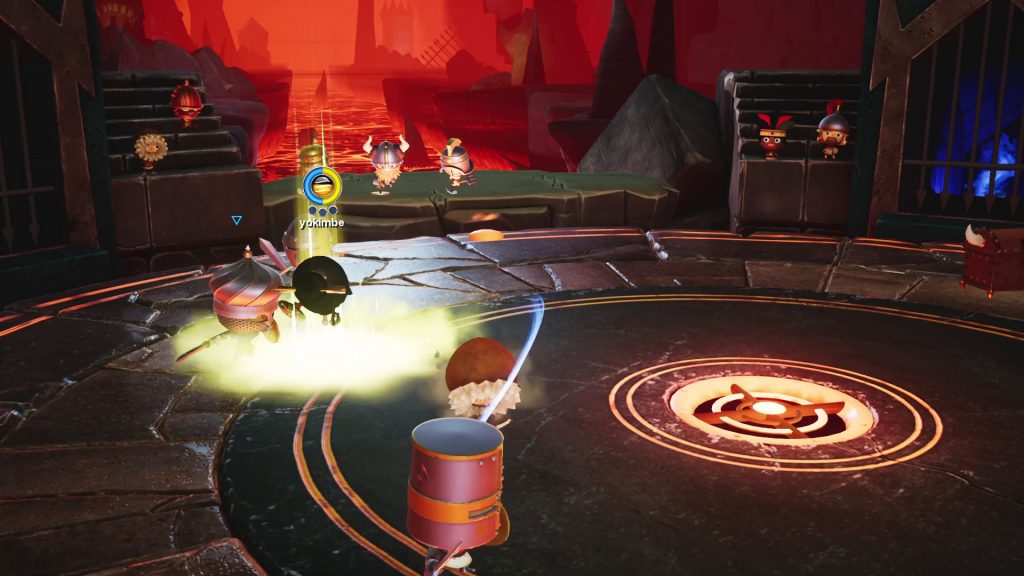 There are 40 or so fighters, each loosely based on warriors from New period of history. There’s a samurai, a roman soldier, a Zulu fighter, and so on. Sadly, none of them have anything resembling a personality beyond superficial stereotypes that often just come across as racist. Take the Māori warrior Manawa, for instance: the full extent of his character description is haka and cannibalism, both played for shock and laughs, and stripped of all cultural context.

The character models are caricatures of the people they’re based on. It’s clear that at least some effort had gone into researching the armour and clothing of the chosen historical settings, but much of the potential authenticity is lost in overly simplistic designs that don’t leave much room for attention to detail. Each character’s visual identity comes down to one or two key props, again making them feel like shallow stereotypes than fully fleshed out character designs. The bobblehead proportions and dead, soulless eyes are icing on the cake, making each character look like a racist Funko Pop! figure.

The mobile version has these same problems of course, but they’re less noticeable. For one thing, there’s a much bigger roster of fighters—around 140 or so—and they draw on a wider range of sources than history. Mobile play patterns and screens also make it easier to keep yourself at something of a distance, without putting as much attention on the game and its characters as one naturally does when playing on console. What that all amounts to is a game I couldn’t recommend to anyone, unless shallow combat and cultural stereotypes are your jam. Even then, World of Warriors is a game that’s best played on mobile; all the PS4 version does is highlight its flaws, and trade modest microtransactions for a surprisingly steep upfront cost.

World of Warriors is developed by Saber Interactive and published by Sony Interactive Entertainment. It’s available now for PlayStation 4 (reviewed), Android, and iOS.