I was very doubtful about the idea of a sequel to 2016’s Unravel. That was a fantastic game, and the ending was so perfect that I couldn’t see how anything would be able to follow it and do it justice. As such, it was with an odd mic of excitement and reticence that I received the announcement of Unravel Two at E3 this year.

My doubts couldn’t have been more misplaced;  Unravel Two is everything a sequel to Unravel should be. it’s got the same emotive, wordless storytelling and the same focus on creative puzzle platforming. Instead of undermining Unravel‘s ending by trying to continue the original Yarny’s story, the new game tells a new story centred on two new yarn-made heroes (whom I’ve creatively nicknamed Red and Blue after their default colours, though you can customise them).

It’s also a much darker story. Unravel was all about the threads that bind family and loved ones, as envisioned through Yarny’s seemingly endless string of yarn that connected him to his home no matter how far he went. Unravel Two opens with Red caught in a storm that tears their yarn—and with it, their connection to home, to family, to love. Before too long, Red meets Blue—another yarny whose string is similarly severed. Both cold and alone, they find comfort in one another’s company. With a flash of light, the split ends of their threads fuse together. 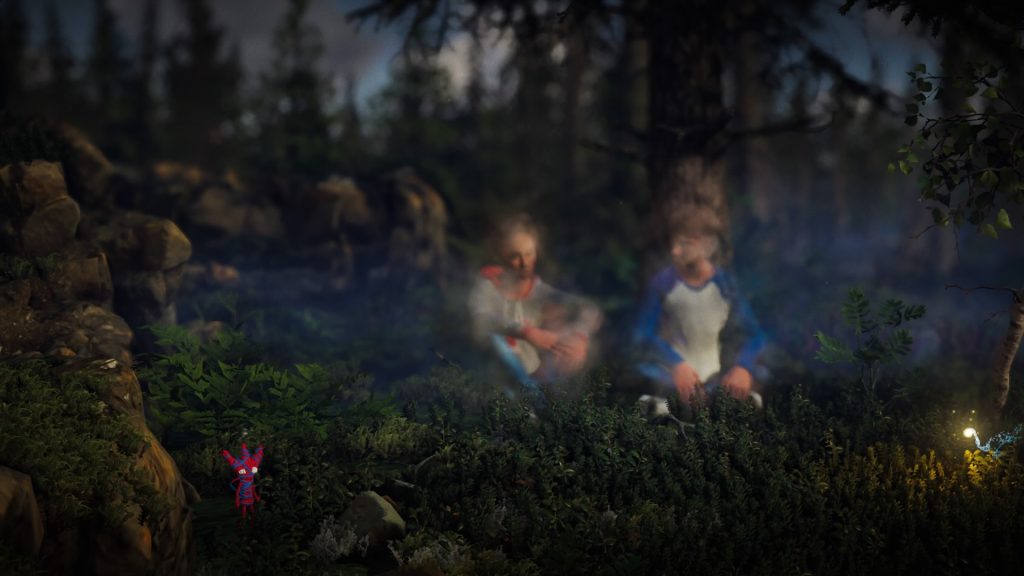 As well as being crucial to the puzzle design (more on that in a moment), this image of torn strings being united underpins the major thrust of Unravel Two‘s narrative: one of found families and support systems for those who can’t rely on the “traditional” family structure. As you play through Unravel Two‘s levels, you see another story play out in the background through visions of ghost-like humans. After some sort of fight with a violent-looking adult, two teenagers flee from what is presumably one of their homes, setting out on a dangerous journey across the countryside until they can eventually find a place to call home.

The specifics are kept deliberately vague and open to interpretation, but what’s inarguable is that these kids are running away from a broken home, from adults who are at best overbearing and at worst violent and abusive. The whole world is hostile to them, and they spend their life on the run—but they have each other. Those endless threads of familial yarn are irreparably broken, but they have each other.

As I said, it’s a much darker complement to the story of Unravel, which certainly had its moments of drama but was fundamentally a poignant, hopeful tale. Unravel Two is hopeful, too, but it’s a hope set against a much bleaker backdrop. Levels range from dank industrial factories to lush forests, but even in the most picturesque levels, there’s always sense of foreboding, be it from shadowy monsters that haunt Red and Blue’s journey or from a generally heavy atmosphere. 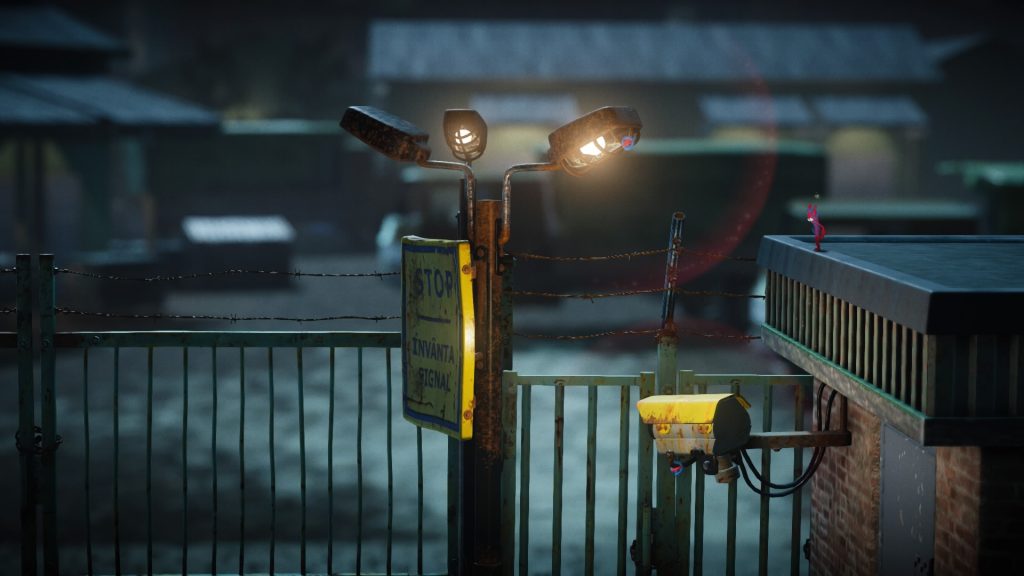 At the same time, that depressive mood all builds up to one of the most stunning finales I’ve seen in a game since Unravel itself. I don’t want to give it away, of course, but suffice to say that it’s an utter celebration of love, life, hopefulness, and the idea of a light at the end of the tunnel. The way it uses a simple twist in the basic mechanics of the game to bring Unravel Two‘s ideas of companionship and cooperation to the fore is simply sublime.

It’s also worth pointing out that this isn’t part of some attempt to be “edgy” or create some shock factor, as is often the case with domestic violence in games. Unravel Two is a thoughtful, nuanced, careful, considered take on the subject, with everything from the character animations to the music to the puzzle design working in concert to build a sense of empathy for the kids at the centre of it all.

If you haven’t already guessed, Red and Blue represent those kids you see in ghostly background cinematics, and through them, Unravel Two brings a lot of those more serious ideas to life in a colourful, surreal way. Every puzzle in the game comes back to that central idea of “found family”, as you work with the pair of yarnys and the thread that connects them to navigate your way around a variety of obstacles. Its similar in concept to Unravel, which had you using your string to climb objects and swing around, but this time, there’s the added element of having two characters working together. 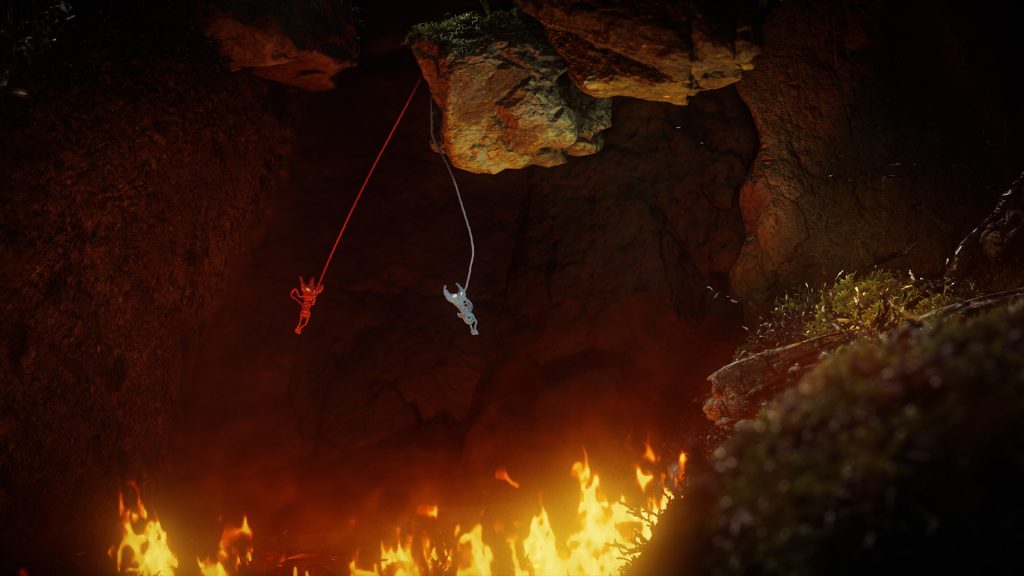 For example, you’ll often have one yarny standing in place acting as a sort of anchor, while the other swings down from a platform or rappels up a wall. Some puzzles have the pair working in tandem, like a pulley system, or relaying one another from platform to platform. The important part is that everything comes down to them working together, helping one another, and supporting each other.

This also lends itself nicely to Unravel Two‘s local co-op mode, which puts each character in control of one of the two characters. I must admit, I haven’t played around with this much, but given the game’s focus on cooperative puzzle solving and the bonds that go with that, it’s easy to see co-op play as being a perfect extension of those themes. It’s a bit disappointing, though,  that there’s no online multiplayer; I imagine that Coldwood wanted to emphasise the intimacy that comes with local co-op, but playing online can be just as close—especially when you consider that a lot of those “found families” are created online, through things like social media.

Conversely, playing alone works just as well. You can switch between Red and Blue at the press of a button, and when you don’t need to control them separately, you can have one pick up the other—and weave their threads together—so that they function like one single character. It’s an elegant solution to a minor frustration that crops up often in these “singleplayer co-op” games. 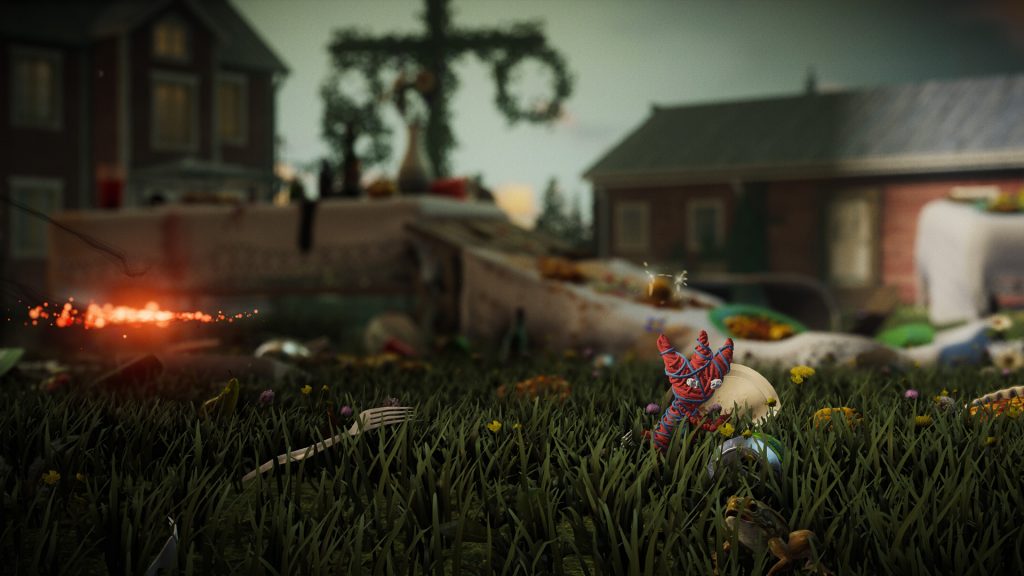 One frustration I had with Unravel was that it was surprisingly challenging, which seemed odd for a game that otherwise has such universal appeal in its storytelling and design. Coldwood have gone to some length to address this in Unravel Two, resulting in a far more approachable, inclusive game.

This is most apparent in the hint system. Each and every puzzle in the game has three hints that you can pull up on a whim; the first two are simply clues to point you in the right direction, while the third is a step-by-step guide to solving the puzzle. It is, in essence, a walkthrough baked right into the game, that you can use as much or as little as you like. For the people concerned about this making the game “too easy”, they can simply not press the hint button, while everyone else can go in knowing that there’s that option when they get stuck.

For platforming sections that are more about timing and precision than puzzle-solving, there’s also a slow-motion button. Admittedly, this isn’t quite as impactful as the hints, and some of the puzzles can still be challenging even with slow-motion, but it at least takes the difficulty down a notch. At the same, the controls feel much more responsive than they were in Unravel, and Red and Blue are far more agile in their movements. 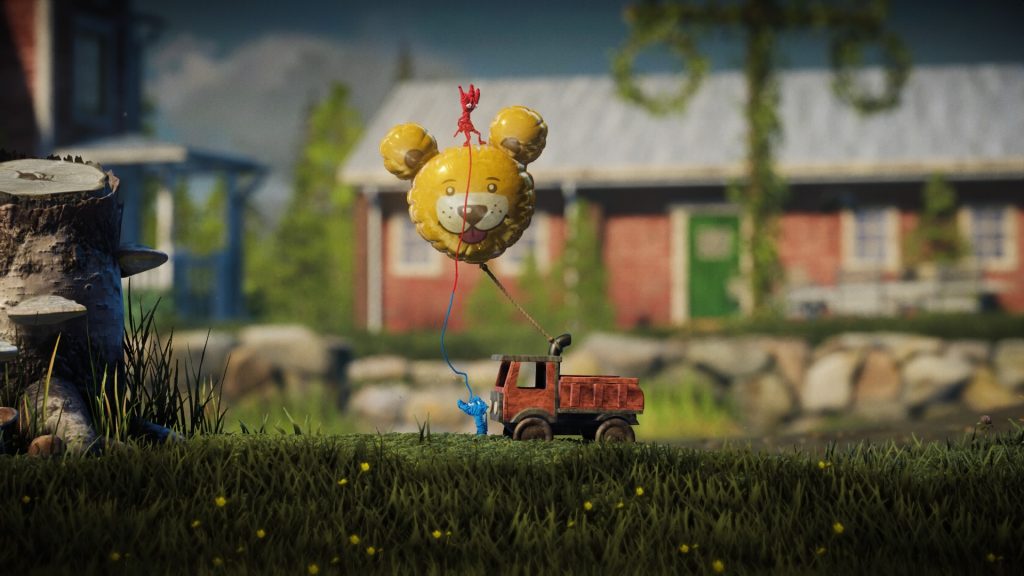 At the other end of the scale, Unravel Two saves its most difficult challenges for optional challenge levels that unlock each time you clear a chapter of the main story. There are no hints or slow-motion your these, and they’re downright brutal—to the point that I haven’t been able to complete a single one. This is a game that really does manage to cater to players of all skill levels.

That’s a good thing, because Unravel Two is a game that should be experienced by as many people as possible. It’s another incredible achievement in using every aspect of game design to tell a compelling, emotive story, and it does so without overshadowing its predecessor’s heartfelt ending. In a word, Unravel Two is perfection.

Unravel Two is developed by Coldwood Interactive and published by EA. It’s available now for PlayStation 4 (reviewed), Xbox One, and PC.