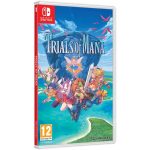 The original Seiken Densetsu 3 (now known officially in the West as Trials of Mana) is one of my favourite Super Famicom games. When murky corners of the internet introduced me to fan-translations in the early 2000s, a found a whole new world of games I thought I’d never have the chance to play (and plenty more I’d never even heard of.) I couldn’t even name half the games I sampled from the wild west of ROM sites back then, but I few have always stuck with me—Seiken Densetsu 3 chief among them.

Needless to say, I was excited when Square Enix announced Trials of Mana, a full remake of Seiken Densetsu 3. But I was cautious in my excitement; after feeling very cold toward the remake of Secret of Mana—a game I don’t cherish nearly as much as its sequel—I couldn’t shake the possibility of Trials of Mana falling just as flat.

But to play Trials of Mana is to play Seiken Densetsu 3, not as it is, but as I remember it through the rosiest of tinted glasses. As much as I love the original, it’s not a game that’s aged well (I lesson I learnt when I tried to revisit it recently, thanks to its inclusion in Collection of Mana); combat can feel unwieldy by modern standards, and hardware limitations make even basic things like navigating menus more tedious than they should be. Trials of Mana washes all those problems away, while staying as true to the feel of the original as possible—in doing so, it’s one of the best examples of a pure remake in recent memory.

The most obvious change from the original is the switch from 2D sprites to 3D graphics, and with it, a shift from a top-down perspective to an over-the-shoulder third-person view. As much as I love pixel art—and Seiken Densetsu 3 has some of the best in history—it’s hard to argue with what the new camera does to create a sense of place that the original, beautiful as it is, could never achieve. Importantly, the general tone of each area remains very much intact, even with the shift away from 2D sprites.

Related reading: Trials of Mana follows hot on the heels of Final Fantasy VII Remake, which takes a very different (but also very effective) approach to remaking a beloved classic. Here’s our review.

The third-person approach also opens the door to interesting level design, especially when coupled with the new ability to jump: Trials of Mana isn’t exactly a platformer, but there are still plenty of shortcuts and hidden treasures waiting for those who really explore. Aside from map edges, there are very few invisible walls, too—if you want to try and jump your way onto the roof of a building, go for it; chances are you’ll find an item up there, too.

The other major change is in how combat works. While the original Seiken Densetsu 3 was still an action RPG, it tried to encourage a more tactical, less hack-and-slash approach by having your every attack followed by a short but noticeable recovery animation. You could still move during this, but if you tried to attack before your character was ready to do so, you’d just flail on the spot and leave yourself wide open to a counterattack. The emphasis, then, was on making good use of the available space for hit-and-run attacks, and to try and bait enemies into whiffing attacks of their own and leaving themselves vulnerable.

That’s an admirable goal and it worked very well for its time, but it’s also an approach to combat design that’s come a long way since. Things like dodge rolls, blocking, and telegraphed area attacks are now genre standards, and when implemented well, they can do just as much to encourage that sort of back-and-forth fray as Seiken Densetsu 3‘s recovery animations did.

Trials of Mana takes what the original game did well and incorporates 25 years of growth in the genre, resulting in a battle system that is much more dynamic and faster-paced, and encourages tactical use of space and mobility even more. Most significantly, you can now jump and roll, which makes a huge difference in terms of being able to move around the battlefield and avoid attacks.

You’ve also got a handful of different basic attacks (quick, strong, charged) that you can chain together in different ways, with certain combos having very useful effects like interrupting enemy attacks or hitting an area around you. And while “combos” might sound antithetic to what Seiken Densetsu 3 was going for, the basic idea is still intact: most attacks won’t interrupt the enemy, so getting careless with your attacks will still leave you vulnerable, so you still have to think before you act and be wary of positioning.

Beyond that (and some other small quality-of-life changes, like menus that are easier to navigate), Trials of Mana remains largely the same as the original game. Every cutscene is an almost line-by-line reemake, only with the cinematic approach to editing that comes with being a 3D game on a much more powerful console. The story follows the exact same trajectory, each map sticks closely to the original layout, and the equipment and levelling systems remain pretty much unchanged.

In other words, Trials of Mana  keeps a lot of the most unique and interesting things about Seiken Densetsu 3 intact, not least of all its potential for very different playthroughs based on character choice. Instead of a single main character and a bunch of secondary characters, you get to choose one of six heroes to be your protagonist (and two more as companions), with aspects of the plot adjusting accordingly. Each of those six characters has four potential classes they can change to by the end of the game, allowing for a wide range of party setups. For much of the game, you’re given the freedom to choose what order you approach the main objectives, rather than following a strictly linear path.

The characters at the game’s heart are the same charming, ragtag bunch, brought together by fate from wildly differing backgrounds, and each trying to find their own place in a world on the brink of war. Angela is still the best of the bunch, with her sassy, sarcastic self brought to life beautifully with the remake’s addition of voice acting.

Unfortunately, Charlotte still has the overplayed baby-talk gimmick seen in Collection of Mana‘s translation of the original game, and voice acting makes it that much worse (through no fault of the actor’s). That’s a problem easily resolved by just… never having her in your party, I guess, but it would have been nice to see that toned down some. The character designs stay true to their originals, in all the flamboyance only a ’90s JRPG can offer, only now they’re rendered in 3D.

I’m sure there’ll be some diehard purists who think Trials of Mana goes too far, or changes too much; that it should have stuck to a top-down camera and left the battle system unchanged (despite how well that worked out for Secret of Mana). Luckily for them, the original remains readily available and accessible through Collection of Mana.

For everyone else, Trials of Mana is exactly what you’d want from a remake: a game that sticks as closely as possible to the source, while modernising those things that haven’t aged so well. I can’t think of a better way to celebrate the legacy of Seiken Densetsu 3 than that.

If you liked this review and plan to buy Trials of Mana, you can support Shindig by getting it from nzgameshop.com using this affiliate link.

Trials of Mana is developed and published by Square Enix. It’s available now for Nintendo Switch (reviewed), PlayStation 4, and PC.