Content warning: The Missing—and, by extension, this review—deals extensively with themes of self-harm, suicide, bullying, and discrimination against queer people.

“This game was made with the belief that nobody is wrong for being what they are.”

This message is one of the first things you see when you load up The Missing: J. J. Macfield and the Island of Memories. At first glance, you might brush it off as little more than a legal disclaimer, or an effort to dissuade any potential accusations of insensitivity—not unlike the “many backgrounds and faiths” messages in Assassin’s Creed games.

But this message is anything but that; rather, it cuts to the very heart of what The Missing is all about. Beyond the surreal world, beyond the grim puzzles, beyond the dashes of black humour, The Missing is a game about the struggles of being true to oneself in a society that’s arbitrarily decided that some identities are less valid than others. In that, it is an absolute masterpiece. 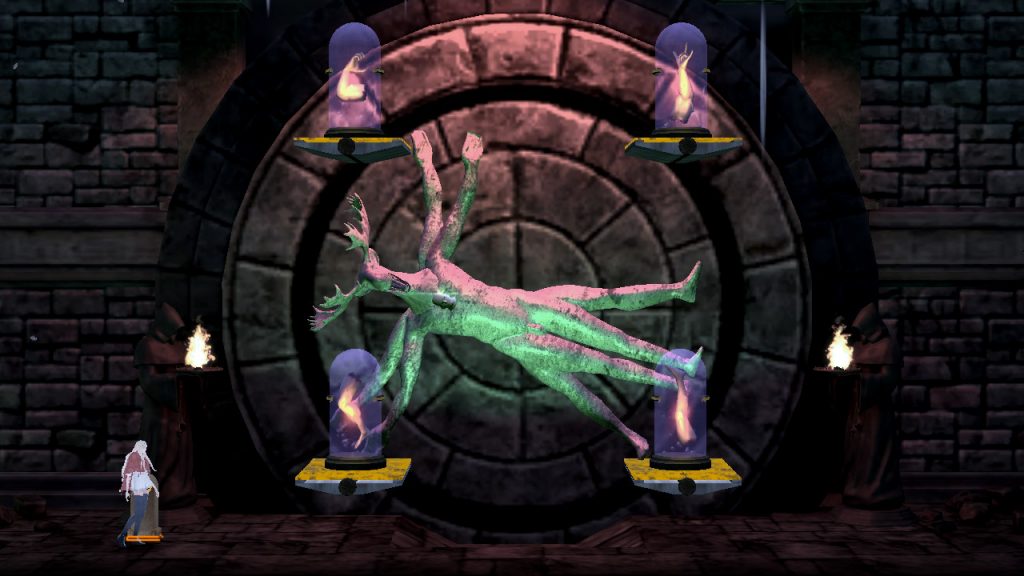 At the centre of The Missing is J. J. Macfield, a college student who has a turbulent relationship with her mother and who has suffered plenty of bullying in her lifetime. Luckily, she always has her best friend and maybe-girlfriend (more on this later) Emily by her side. Emily knows all of J. J.’s deepest secrets, and loves her for exactly who she is.

One day, the two women decide to go on a camping trip to Memoria, and island off the coast of Maine. What starts out as a relaxing getaway takes a turn for the worse when J. J. wakes up in the night to find Emily missing, sets out in search of her, and ends up getting struck by lightning and seemingly killed.

Only, she’s not dead. Fighting through the agony of being electrocuted and burnt, J. J. manages to regenerate her body and press on with her search. More than that, this borderline invincibility becomes the key to navigating the medley of traps spread across Memoria. Spikes, saw blades, fire, and other such traps that would usually kill a platformer protagonist in an instant leave J. J. maimed but very much alive, able to continue on with her dismembered limbs being vital tools in solving the various platforming puzzles. A press of a button regenerates J. J.’s form, only to do it all again. 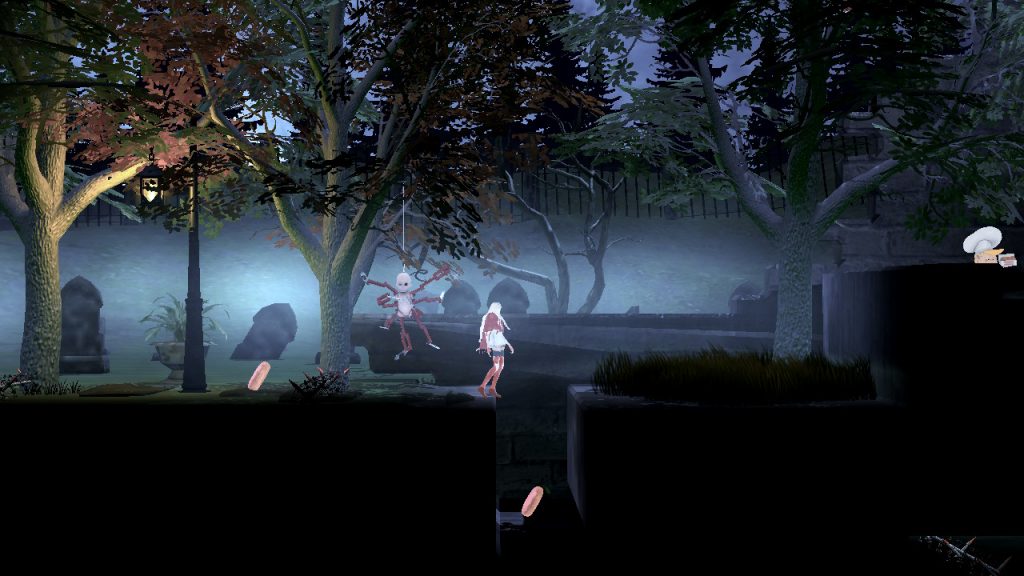 Sounds grotesque? On a superficial level, it is—after all, you’re doing things like cutting off your arms and legs to weigh down seesaws, setting yourself alight to navigate dark rooms, and breaking your neck to literally turn your world upside down. Such actions are accompanied by screams of pain, and a morbid cartoony icon in the corner of the screen lets you know your current level of dismemberment. One might even accuse the game of fetishizing pain and self-harm, if one looked no deeper than “mutilation as a means of solving puzzles.”

But The Missing, superficially grim as it is, is so much more than that. Again, it’s a game figuring out who you really are—a journey that is often painful and fraught with self-sabotage, intentional or not. But by taking that journey, unpleasant though it is, we’re able to really find our identity.

Likewise, The Missing‘s violent puzzles are not so much about the self-destruction, but the regeneration that follows. They’re not about the screams and the pain, but the sudden absence of such that comes with regeneration, each one bringing J. J. a step closer to self-actualization. It’s like the old metaphor of a butterfly emerging from a cocoon, only more shocking and more impactful as a result. 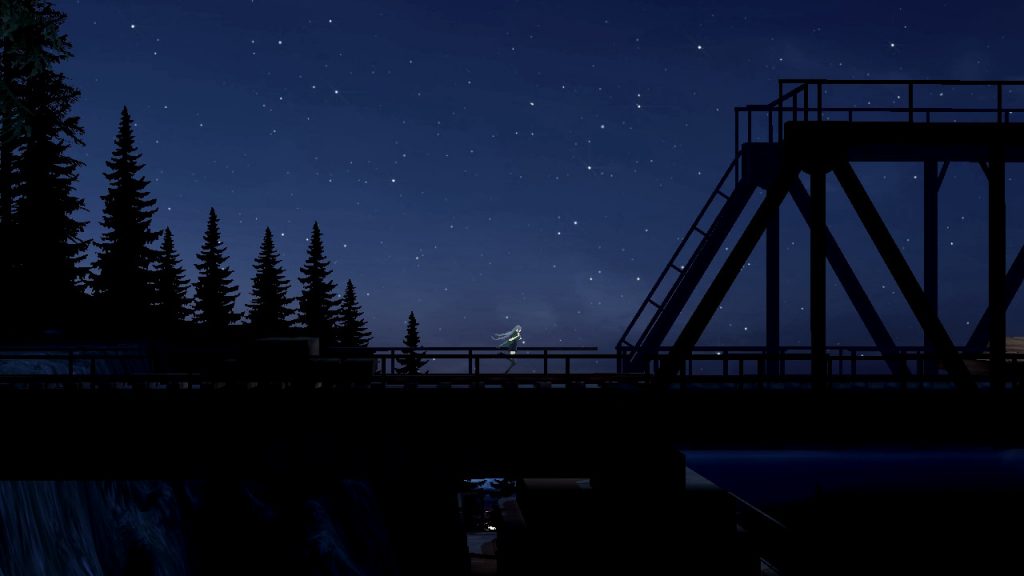 To this end, is careful to not overplay its hand when it comes to its violence. It’s confronting, certainly, but the more gruesome implications are couched in surrealism: white sprays of blood, Swery’s trademark Twin Peaks-inspired world design, the abstraction of relatively low-poly character models and long camera shots, and the almost comical sight of a disembodied head rolling around all serve to create a distance from the twisted reality of what’s actually being depicted. Likewise, the bright lights and serenity that comes with hitting the regenerate button carries a sense of hope. The Missing is grim, but in a way that gets under your skin more than it gets in your face, making the end result that much more powerful.

Spoiler warning: In the following, I go into some detail about what some would consider a big spoiler for The Missing. It’s so central to the themes of the game that I feel like not talking about it would be an injustice to the game. (I’m not convinced that knowing this particular detail would going in would actually “spoil” anything, but that’s part of a bigger argument for another day.) You’ve been warned. 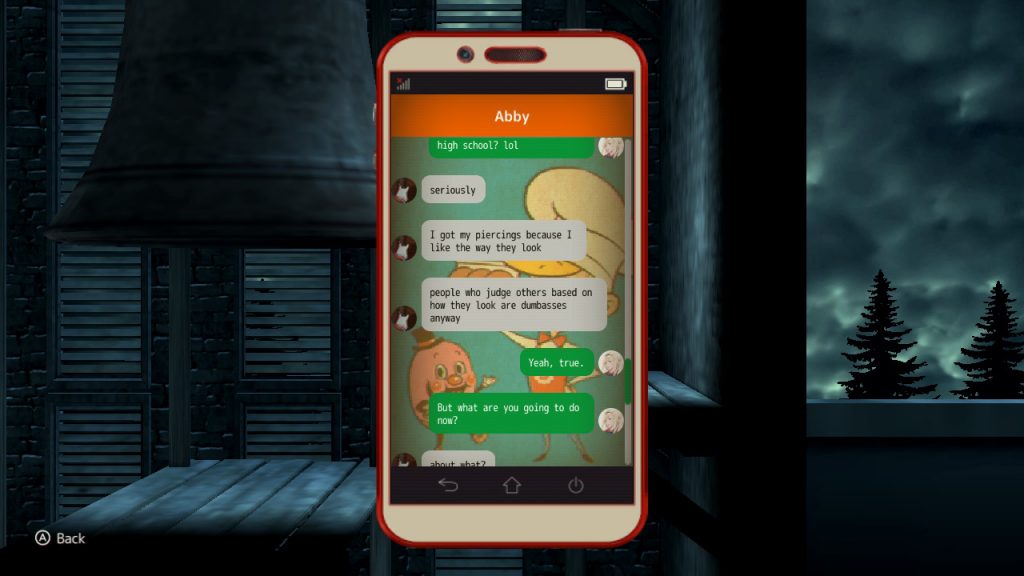 The broader picture that The Missing paints of discovering one’s identity will resonate with most people, I’m sure, but it also carries a much more specific and deliberate message: one about the struggle that trans people go through just to exist.

Something that’s hinted at from the beginning of the game and made explicitly clear towards the end is that J. J. Macfield is a trans woman. She was assigned male at birth, and much to the disgust of many people around her, including her own mother, she came to realise at a young age that she was a girl. This led to bullying and alienation from her peers, and being forced by her mother into some sort of conversion therapy in order to “cure her of her sickness”.

Emily was the one person who simply accepted J. J. and loved her for who she is. That’s no doubt a big part of why they share such a close bond, and it’s also why I’m actually glad that The Missing leaves the question of their relationship vague. They’re described in the game as “best friends”, and while there are plenty of things to suggest that they’re more than that, their possible romantic entanglement isn’t what’s important here. They’re best friends first, and that friendship is the thing that’s kept J. J. going and allows her to truly embrace her identity. 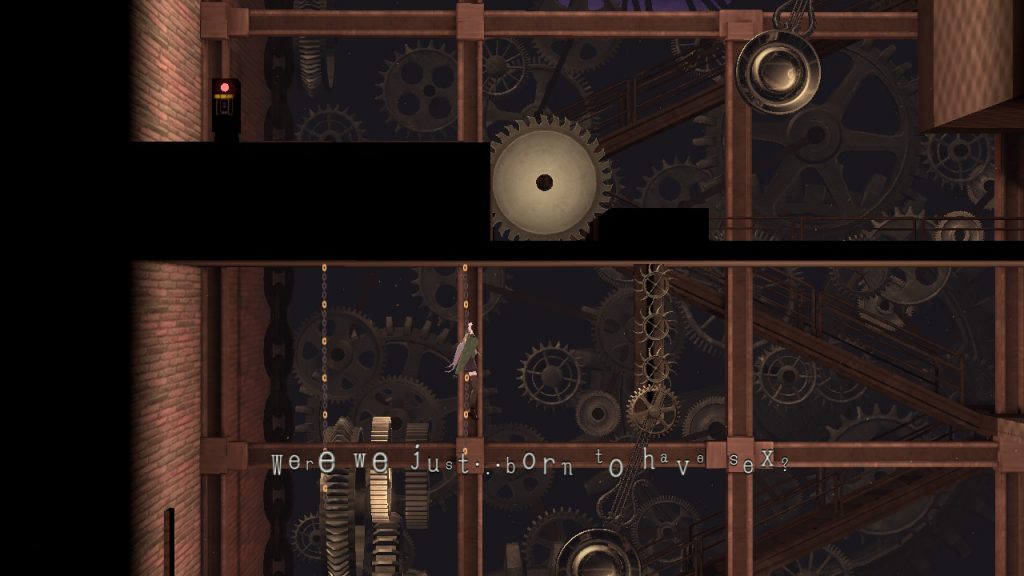 This revelation paints The Missing‘s morbid puzzle design in a new light, as well. J. J. is someone in conflict with the very body she’s been lumped with, one that doesn’t match her own self-identity and is a source of seemingly endless pain and discomfort. But in regenerating herself, J. J. is able to remake herself in her own image—not just an emotional self-actualization, but a physical. It’s not a stretch to see this as a metaphor for dysphoria and gender confirmation surgery, in The Missing‘s dark and surreal way.

Related: Kotaku’s Heather Alexander wrote an excellent piece on how well The Missing handles its queer themes. It’s well worth a read.

The end result is something that’s horrifying and depressing, but ultimately hopeful. Between the abstraction of the puzzles and the delivery of backstory through a means as everyday as text messages, The Missing paints a heartbreaking picture of the trauma that trans people so often have to live through, in order to make the point that this isn’t the way things should be. “Nobody is wrong for being what they are.” Nobody should be prevented from being who they are by a society that deems some identities as being less valid than others. Trans people have a right to exist.

(It’s worth noting that the game’s director, Swery, isn’t trans, but the credits include a number of trans and queer people as advisors.) End of the spoilers

The Missing: J. J. Macfield and the Island of Memories is a lot of things. It’s a nifty puzzle platformer that cleverly plays around with the expectations of the genre. It’s a heartfelt tale of friendship, of love, of tragedy, and of hope. It’s a game about being true to oneself, even though the journey to reach that point is often a painful one. Most of all, it’s a game that says everyone has a right to exist and to flourish and to be loved.

It’s a game that is, wholly and completely, made with the belief that nobody is wrong for being what they are.