As the credits rolled on The Gardens Between, I could feel the tears welling up. They weren’t tears of joy or tears of sadness, but that weird sort of bittersweet no-man’s land that comes with nostalgia—when you remember the good old days, knowing they’re just out of reach.

It wasn’t just a heartfelt plot or charming characters that brought about the tears, either. The Gardens Between is that rare example of a game whose every element works in unison with everything else to deliver on an idea. There isn’t a “story bit” and a “gameplay bit”, with some background music floating around in the wings waiting for its turn to shine; they’re all one and the same. 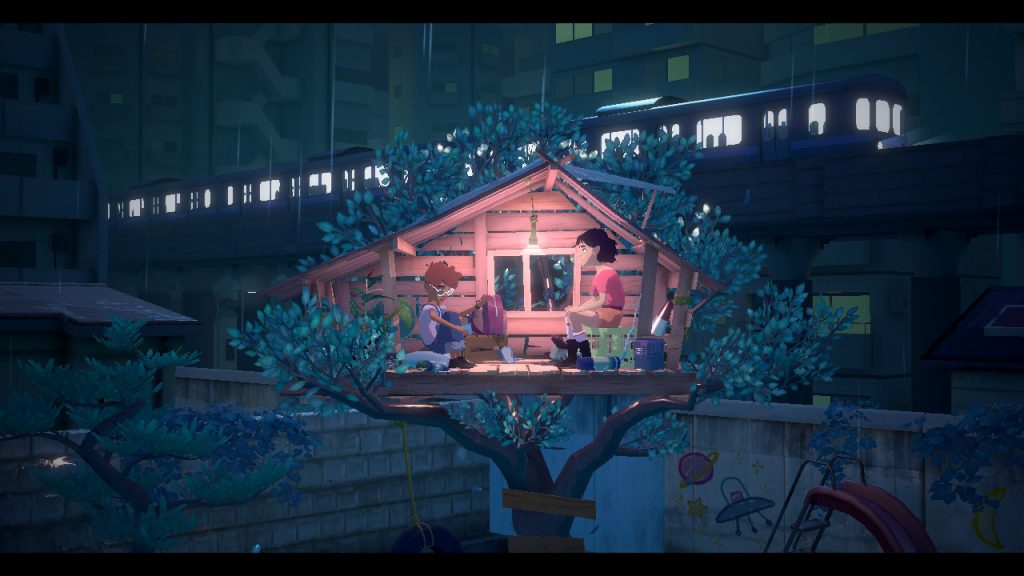 That world of their own becomes a literal one when they’re suddenly whisked away to a surreal island garden. Objects from the pair’s first meeting adorn the landscape, defying space and gravity as they sit precariously on rocks. What should be pocket-sized items are now big enough to walk across, and a dreamlike mist envelops the island.

Your goal among this is to guide the duo to an altar at the top of the island, and light a torch that sits there, before moving onto the next island and doing the same. I say “guide” because you don’t control Arina and Frendt directly; rather, you manipulate time as they move forward of their own accord.

Advance time, and the pair will walk along the path before them until they get to some sort of obstacle; rewind time, and they’ll reverse their steps. In general, the environment follows similar rules: a drop of water falls as you advance time, “falls” upward, so to speak, when you rewind, and stops in place when you do let time pause.

But there are other objects—typically those of particular nostalgic importance to the friends—that aren’t bound to the same chronology as the island around them. These objects remain still while you move time for the rest of the island, but you can independently move their timelines by guiding one of the friends to a special wind chime. By doing so, you open up new pathways so that Arina and Frendt can keep moving forward. Giant soda cans floating along a river can form a bridge, so long as you adjust their timing so that it matches the duo’s arrival at the riverbank; the bones of a falling dinosaur skeleton, when frozen in time, can be a stairway up a cliff face. 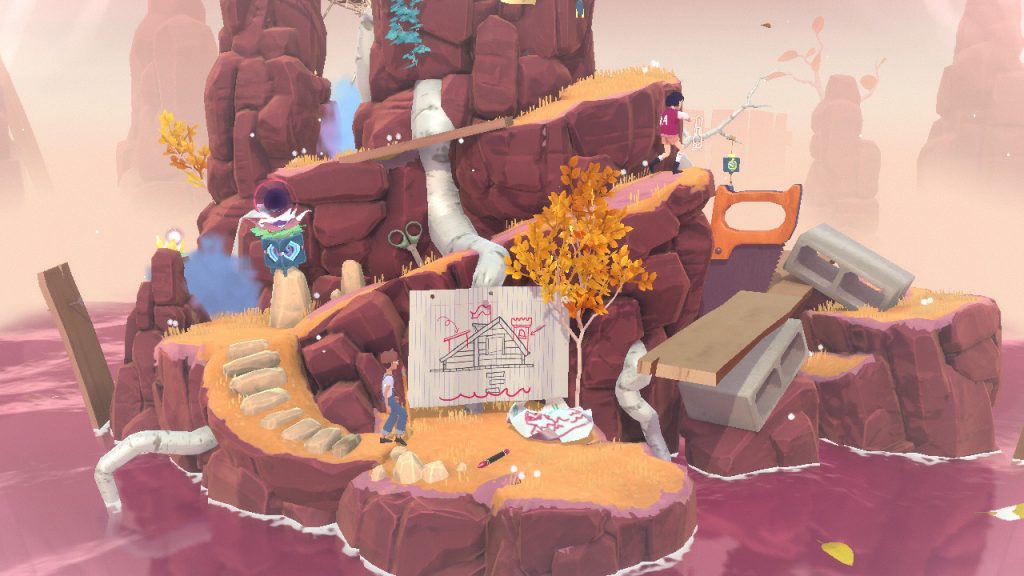 At the same time, light and shadow play an important role. Arina carries a lantern that can absorb any orbs of light she comes across, which in turn activate light-based bridges and the altars at the top of each island. While Arina is carrying a lit lantern, any clouds of darkness the duo encounters get washed away. That’s often helpful, but not always so—as well as creating impassable road blocks, these clouds also form bridges that are vital for moving forward.

As such, it’s not enough to simply pick up an orb of light and carry it to the end. Sometimes you have to snuff the light out by carrying it past a black hole, or let it rest with a cute, imp-like cube that hops around the island as you march time forward, and then collect it again later on.

With these systems in place, the puzzle design in The Gardens Between relies heavily on moving back and forwards through time, traversing and re-traversing these old memories that the islands are made of. Each time, the memory is slightly different, but all those vivid, disjointed, but powerful icons remain constant. Most of those are happy memories, but the ones that aren’t are every bit as important and worth remembering—a shadow can be a pathway as much as a wall.

The whole game is about a pair of best friends exploring nostalgically reliving their memories, and that comes through more vividly through the puzzles, world design, and Tim Shiel’s haunting score. Without a single written word or line of spoken dialogue, The Gardens Between perfectly conveys the story of Arina and Frendt. 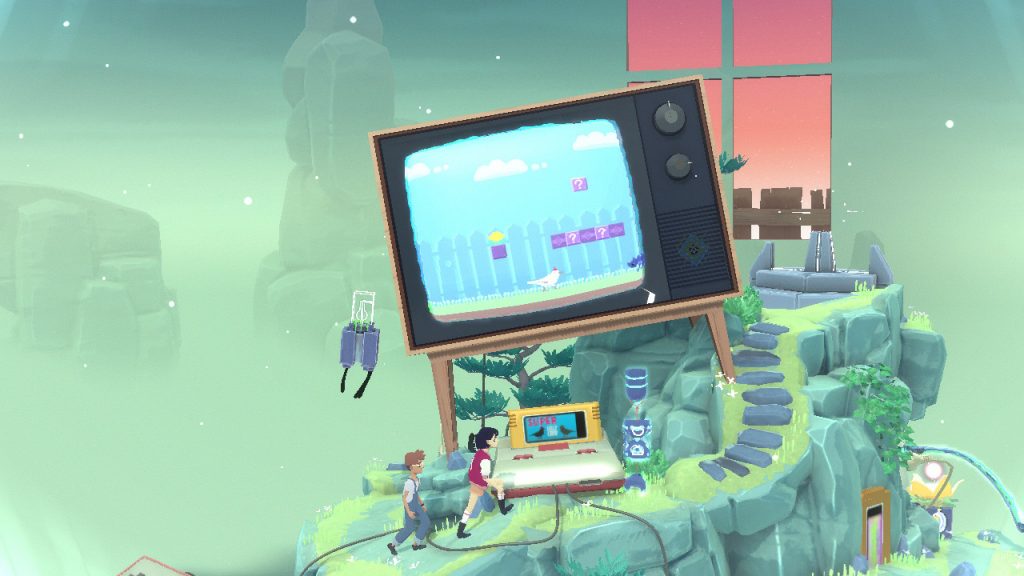 It’s not just the story of Arina and Frendt, though. Reminiscing about long-lost childhood memories is an almost universal experience, and even the particulars of their nostalgia—8-bit consoles, playgrounds, cassette tapes, and the like—will resonate with a lot of people. With the game design, presentation, and music doing the narrative heavy lifting, it’s easy to just get lost in the atmosphere, to the point of taking on these kids’ nostalgia as your own.

In keeping with that idea of universality, The Gardens Between puts accessibility at the front and centre. The entire game is played with just three inputs—advance time, rewinds, and interact with an object—each of which is mapped to a number of different buttons. On Switch, you can play in any controller configuration, and you can easily play with one hand if you need or want to. No game will perfectly cater to the diverse individual needs of people with disabilities—which isn’t to say that we shouldn’t keep striving to make things better—but by keeping the control scheme as simple as possible and offering a wide range of different options, The Gardens Between is more accessible than most.

Likewise, it doesn’t demand quick reflexes or quick thinking, even though screenshots may make it look like a platformer. The way the puzzles are set up means that you can play at whatever pace you feel comfortable, without having to worry about failure. The level of challenge is fairly relaxed, as far as puzzle games go, though some sort of hint system wouldn’t go amiss to help those people who are more interested in the story and the atmosphere than the puzzle-solving element. 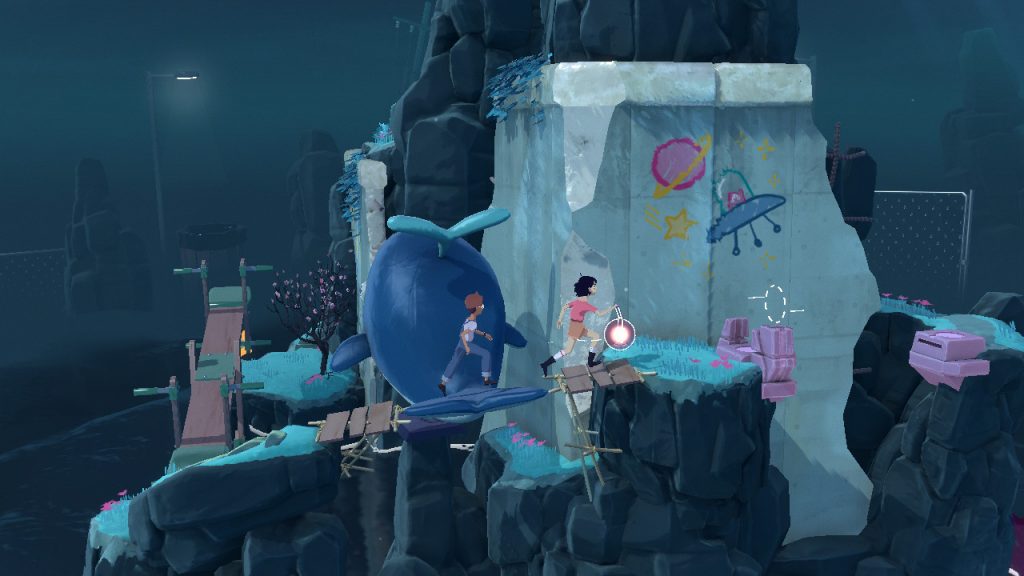 The more people who can play The Gardens Between, the better, because it’s that common experience that makes it so powerful. On paper, the story is a simple one, but it taps into a complex, universal emotion and explores that to the fullest. As an emotional dive into the depths of nostalgia, The Gardens Between is absolutely sublime.