I have a confession to make: a hate Tetris. I had the NES version as a kid, but I found it tedious and stressful and thus rarely played it. The litany of new versions in the years since did little to change my perceptions, nor did the many other falling block puzzle games inspired by it. I can appreciate the cultural icon that Tetris is, but the game itself is not something I’ve ever found particularly enjoyable or noteworthy.

Tetris Effect is a game that finally makes Tetris worth playing. So much more than just a puzzle game, Tetris Effect is a psychedelic trip where the game itself becomes one piece of an audiovisual onslaught. It’s a game that can fill you dread or set your mind completely at ease. Like an acid trip or a perfectly arranged trance set, it’s emotion distilled to its purest form. 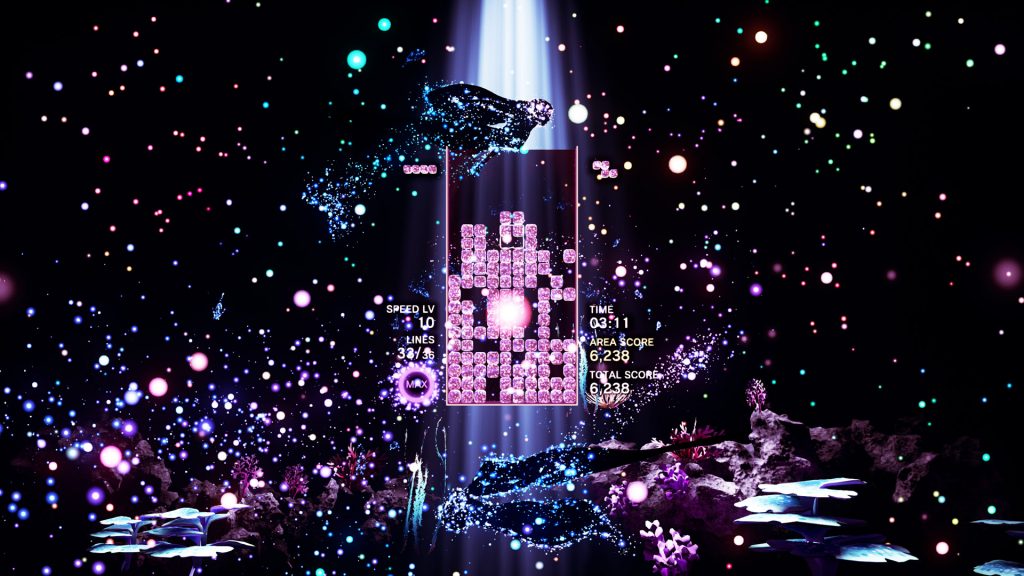 But let’s get back to basics. The core Tetris gameplay is largely unchanged in Tetris Effect: tetrominoes—geometric shapes each consisting of four squares in various arrangements—fall one at a time, and your goal is to try and piece them together at the bottom of the screen without leaving any gaps. When you fill a line completely, it disappears, but if the stack of blocks reaches the top of the screen, it’s game over. The goal, then, is to clear as many lines as you can (and/or get as high a score a possible) before the inevitable game over.

Tetris Effect doesn’t toy with this formula much, the only new mechanic being the Zone Meter. This gradually fills up as you clear lines, and when full, you can activate it to temporarily freeze time. While frozen, tetrominoes won’t fall until you choose to drop them, and cleared lines remain at the bottom of the screen until the effect ends.

It’s a way of giving you some extra breathing space as the game gets harder, but also the key to getting big scores: normally, you can’t clear more than four lines at once (a “Tetris”), but since lines cleared in the Zone don’t count until the mode ends, a skilled player can get as many as 20 clears at once—appropriately called an “Ultimatris”. 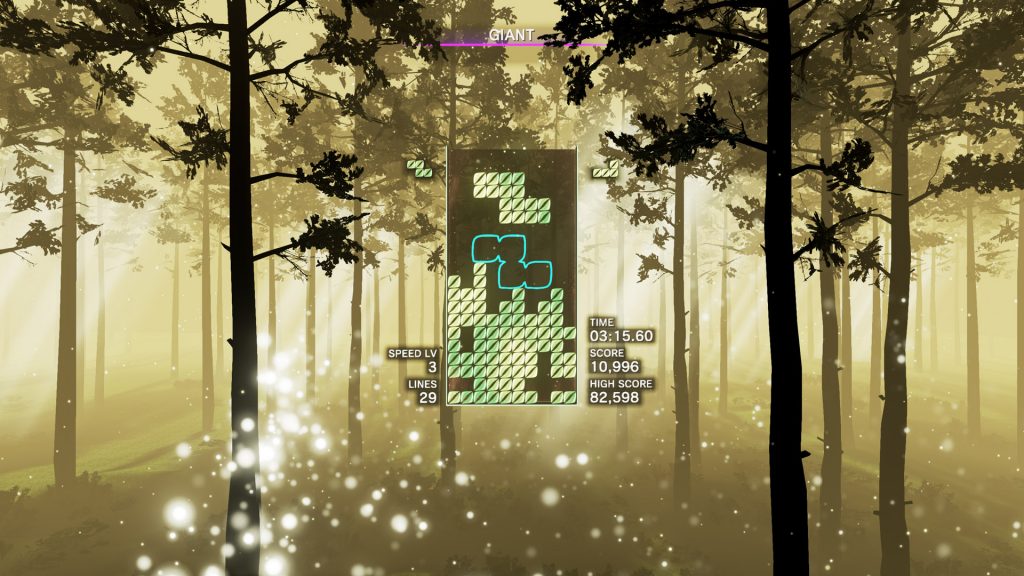 But the real draw of Tetris Effect isn’t in how it amends the classic Tetris game design; it’s in how it contextualises it.

Each level is accompanied by an assortment of visual effects, sounds, and music that sync to the game, ebbing and flowing as you drop tetrominoes and clear lines. On one stage, you’ll find yourself beneath the sea with dolphins that flicker in and out of existence with each line cleared and sound effects tied to your every rotation and drop, adding texture to the ambient sound and creating a sort of procedural music. On another, you’ll find yourself in an otherworldly hell with the speed of tetrominoes ramping up to match the pace of the thumping soundtrack.

City streets, deserts, cloudy skies, and psychedelic dreamscapes are just a few of the sights to take in, accompanied by electronic music with every influence from jazz to hip-hop to hardcore. Where regular Tetris linearly amps up the speed (and, therefore, the difficulty) as you clear lines, Tetris Effect‘s speed dances around the music. With the added stress of a sudden increase in challenge, a shift from the ominous build up to a full hardcore onslaught becomes downright terrifying, just as a drop in speed embeds the sense of relief and peace when you break through to the other side. 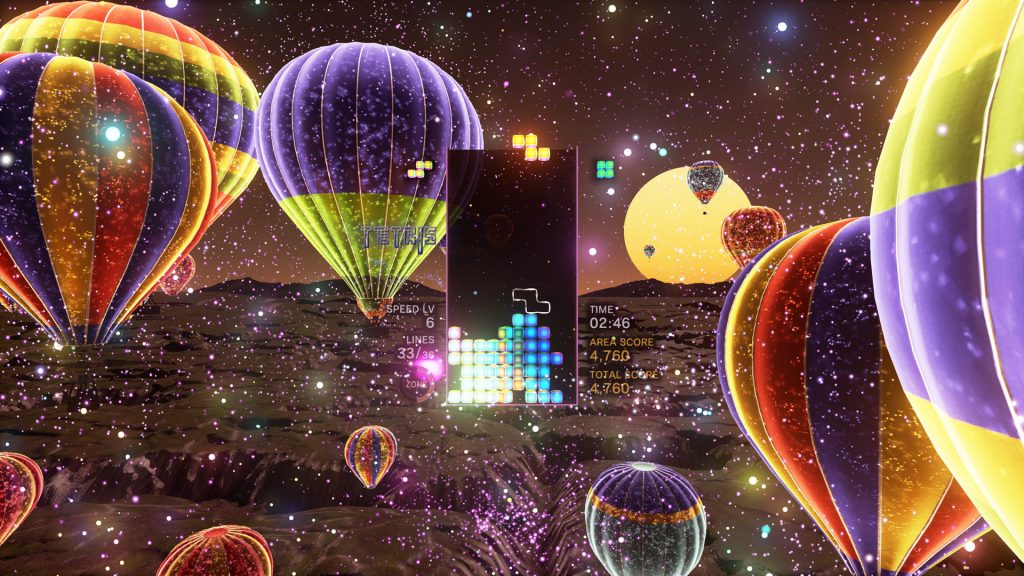 This is most apparent in the suitably-named Journey mode, which guides players through the full gamut of emotion. With a series of stages perfectly curated to get the most out of every emotional twist, it’s a trip that is by turns awe-inspiring, meditative, exciting, joyous, and terrifying. I’m being only slightly hyperbolic when I say that by the end of it, I felt like I was looking into the face of God (and I’m not a religious person by any stretch).

My one complaint is the way game overs interfere with Journey mode’s pacing. Your mileage will vary depending on how good you are at Tetris, but evening the Beginner difficulty setting can be challenging—particularly when it comes to the final level. That challenge is a crucial part what makes Tetris Effect so effective, but the game overs that come with it throw out the perfect balance that the level sequencing otherwise achieves. It’s like listening to a particularly moving song, only to have it arbitrarily cut out and start over from the beginning.

Meanwhile, the Effect mode—which consists of a wide variety of short playlists, each designed to capture a certain mood—often lets you play sets where game overs are disabled. If you build a stack of blocks to the top, the playfield just clears and you can carry on as you were. Even on the more aggressive, intense playlists that use the game’s speed as an emotive hook, the lack of a possible game over does little to dent the impact. Journey mode is at its most powerful if you can play it uninterrupted from start to finish, so it’s bizarre to me that it doesn’t include a similar no-game overs option. 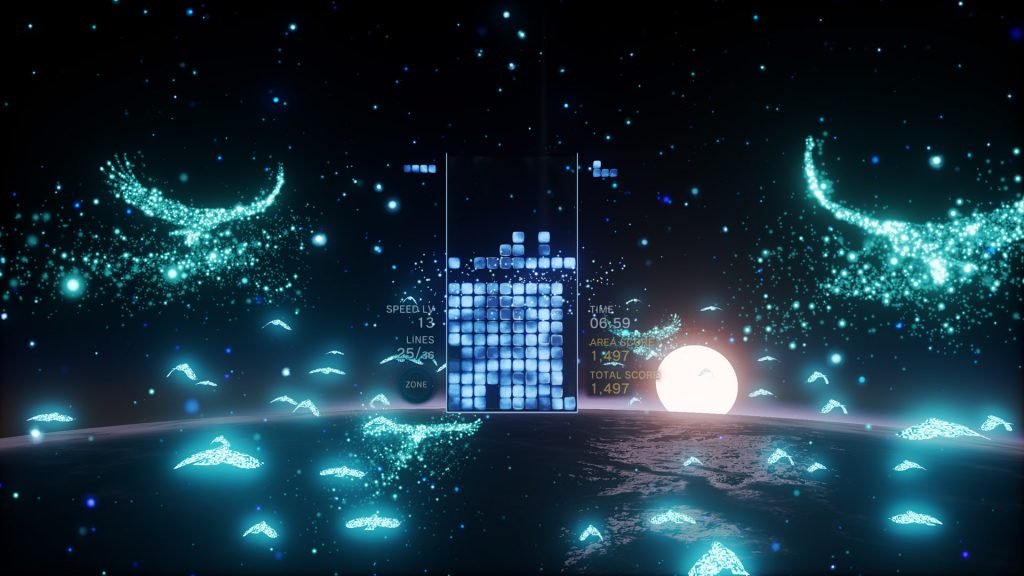 It’s worth pointing out that everything above applies most when Tetris Effect is played in VR mode. The game can be played without VR, and it’s still a spectacle for the eyes and ears in 2D mode, but it’s in VR that the Tetris Effect effect really comes out—when you can let all the sights and sounds wash over you, and the Tetris playfield itself goes from being a small window on your TV to a giant monolith towering over you.