Heroes are defined by their actions. That’s something that’s been at the core of Spider-Man since his inception. The old adage about power and responsibility comes to mind, but it runs deeper than that: anyone can be a hero by doing heroic things. Whether a nerdy kid from Queens, the son of a cop and nephew of a super-villain, or an introverted, artistic young woman, Spider-Man (or Spider-Woman) has always been emblematic of that.

That same idea is at the heart of Marvel’s Spider-Man. For all its indulgence in blockbuster superhero nonsense, the thing that makes Spider-Man stand out is the way it cherishes its small moments. This isn’t just a game about Spider-Man; it’s a game about Peter Parker, Mary-Jane Watson, Aunt May, Miles Morales, and plenty of others besides. Peter may be the only superhero, but every one of these characters is their own kind of hero, and that’s a point that Spider-Man comes back to time and again. 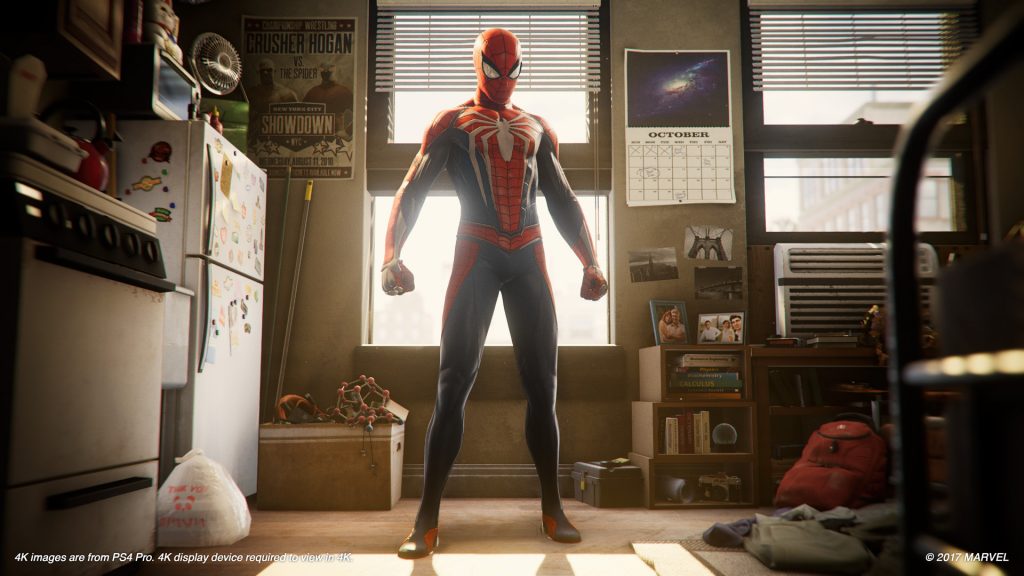 You’re not confined to the red and blue spandex for the whole game; rather, Spider-Man frequently has you play as a maskless Peter Parker. These segments essentially play out like walking simulators, as you wander through the F.E.A.S.T homeless shelter, help out Aunt May with her volunteer work, and assist Peter’s boss with his life-changing medical research. Spider-Man has web-swinging and villain-punching aplenty, but it never forgets that the hero is the guy underneath the mask.

The game doubles down on this with Mary-Jane. Without a radioactive spider in sight, MJ’s only “super” powers are her sharp wit and keen investigative eye, but that’s more than enough for her own share of thrilling heroics—something you regularly get to witness first-hand. In the missions that cast you as the Daily Bugle’s finest reporter, Spider-Man becomes a pure stealth game, as you sneak into villains’ hideouts and the like in an effort to expose the truth (and give Spidey an assist with some helpful information.)

The clear point is that Mary-Jane is every bit the hero that Spider-Man is. She has no way to fight the villains she encounters—it’s all sneaking around and noisy distractions—but she doesn’t let that stop her from doing her part to save New York from the new gang of villains that plagues it. (Before anyone grabs their pitchforks over “forced stealth sections”, don’t worry; the MJ missions keep the tedium to a minimum.) 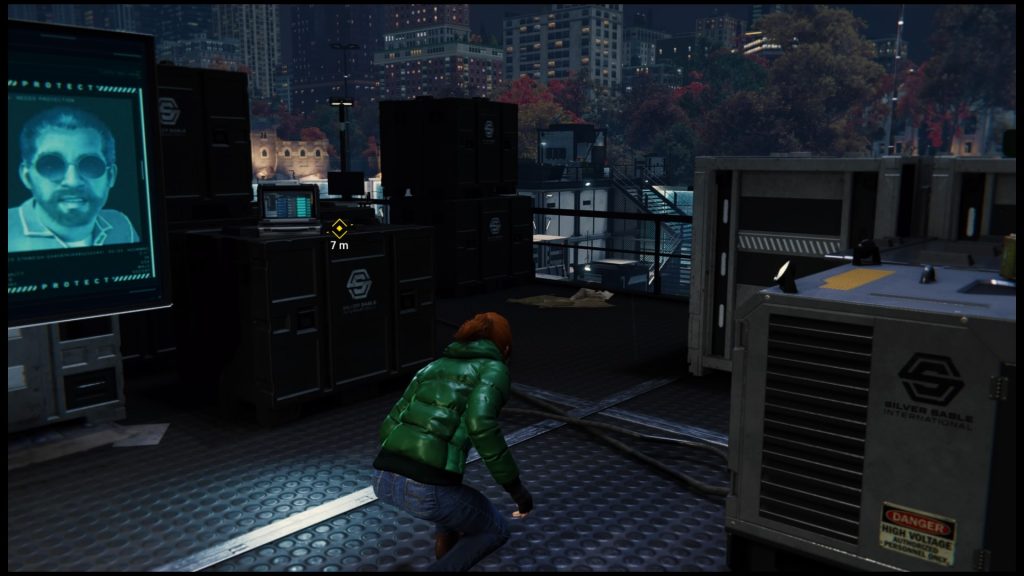 In fact, Spider-Man‘s handling of Mary-Jane in general is a breath of fresh air. She’s a fascinating character in her own right, but one who often gets forced into the role of a damsel in distress or a sort of sidekick to Spidey. In Spider-Man, MJ is very much her own character, and one who stands on equal footing with Spider-Man; indeed, when the stakes hit the roof in the latter part of the game, their partnership is the only way they’re able to get anything done. Spider-Man even goes as far as directly challenging the whole damsel thing, and Pete’s misguided overprotectiveness towards her.

“Sometimes I want to do the saving.” – Mary-Jane Watson

Likewise, the supporting cast also get to be their own sorts of heroes. Miles’ screentime is relatively limited, but he still gets his own arc that sees him figuring out being a hero means for him. Aunt May is perhaps the biggest hero of them all—where would Spider-Man be without her?—and her warmth and care for those around her is abundant. 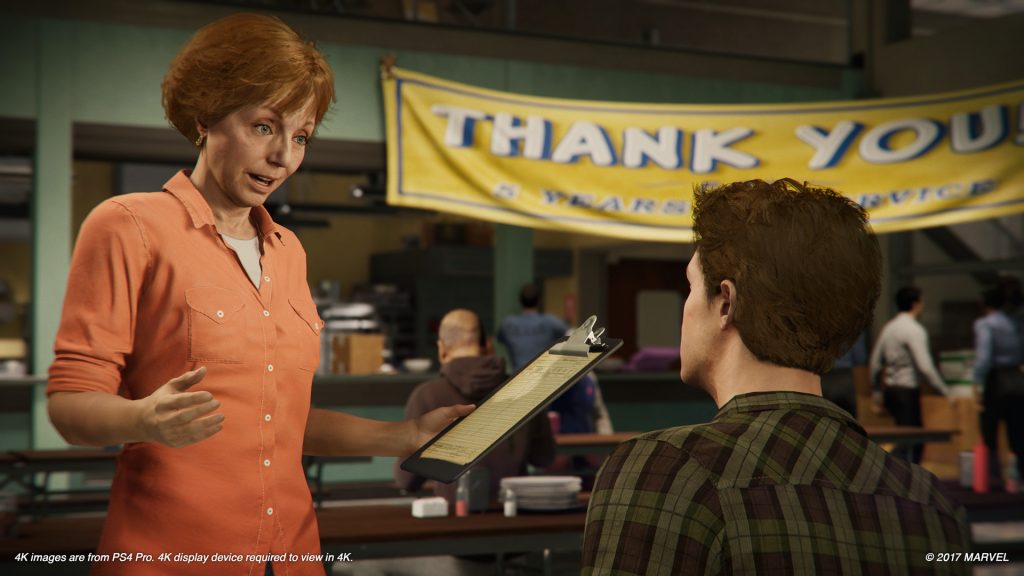 Even among its villains, there’s a thread of Spider-Man‘s theme of universal heroism. For most of the game, the main enemy is Mister Negative, a man who’s willing to level Manhattan in his quest for revenge against Norman Osborn. But Mister Negative, when he’s not being a colour-inverted gang boss, is Martin Li, the philanthropic founder of F.E.A.S.T and a man who goes above and beyond to help people in need. It’s not just some front, either; it’s clear in the way he interacts with everyone around him just how genuine his good nature is. It’s just that his desire for revenge is even greater, and that clouds his judgement—with great power comes great responsibility, and all that.

Don’t let the thoughtful way it deals with the supporting cast fool you into thinking Spider-Man is without the quips that typical of Spidey. He’s never without some wisecrack or other, from dumb puns to meta commentary (“Don’t forget the hyphen in Spider-Man!”). Beneath the silliness, there’s also an element of humanity to Pete’s humour, especially in his dealings with Mary-Jane. In Spider-Man, they’re a broken-up couple in that awkward phase of having to figure out how to work together, and the humour brings with it both charm and vulnerability. 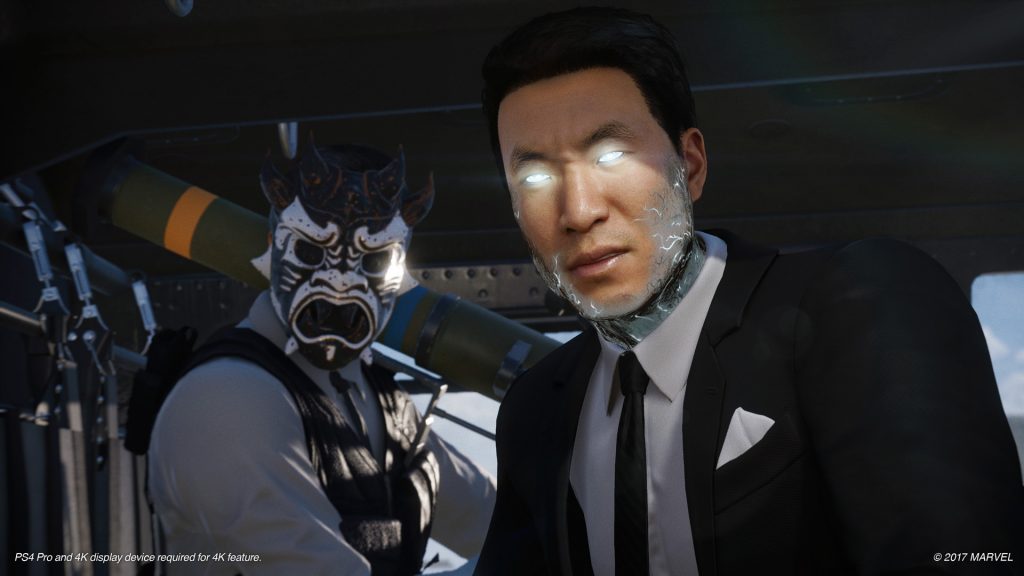 Swing Me to the Moon

Nor would this be a Spider-Man game without a healthy does of web-swinging, but Spider-Man delivers in spades. It’s hard to put into words how exhilarating it is to swing around this game’s recreation of Manhattan. Skimming through the streets inches above the asphalt, flinging yourself hundreds of metres in the air, and zipping across rooftops or up the walls of a highrise never gets old; if anything, it gets to be even more of a rush as you master the minutiae of the physics to go faster, higher, and more acrobatic.

It’s for this reason that despite my misgivings about open-world games I couldn’t see Spider-Man working as anything else. A massive urban playground and finely-tuned web-swinging are a recipe for something so intrinsically satisfying that I hardly ever made use of the game’s quick travel function. Why sit through a loading screen when I could Spider-Man my way across the Manhattan skyline?

That said, it would be a lot more satisfying if Spider-Man didn’t fall into so many of the other traps that a formulaic open-world game bring with it: namely, an excessive amount of pointless busywork littered across the map, complete with “Ubisoft towers” to scale to help you find them. Wherever you are, whatever you’re doing, there’s always something (or a few somethings) at the edge of your screen vying for attention. Spider-Man is at its best in between all the tasks, when you can just enjoy the cityscape, but it goes out of its way to keep from that by inundating you with Things To Do. 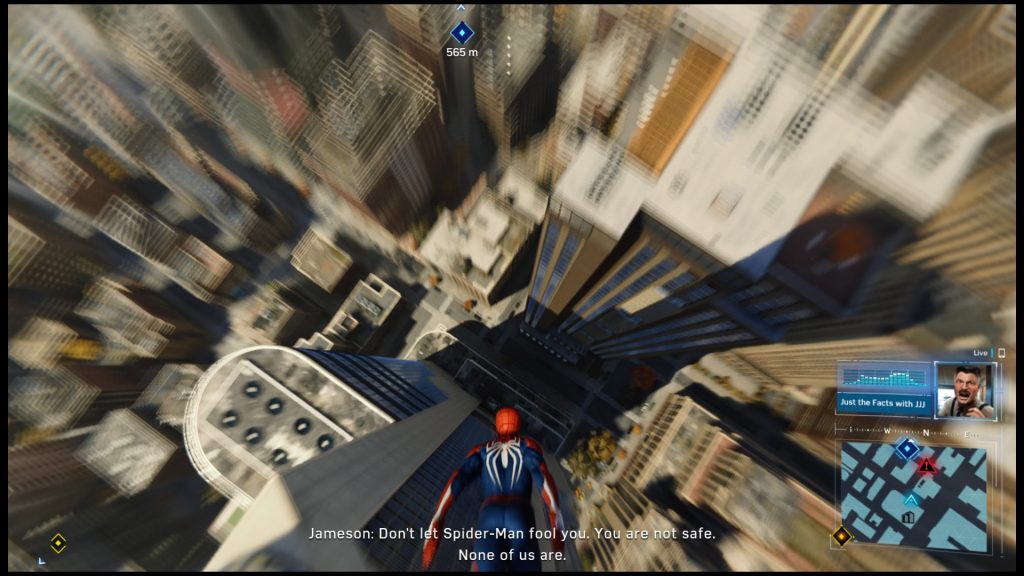 The irony is that most of these side-quests are genuinely interesting the first time. In one set, you’re checking in on a series of research stations set up by Harry Osborn in memory of his mother. He’s worried that the profit-obsessed Oscorp will shut them down if they don’t prove their worth, and so he’s asked you to check on them. It’s a little on the nose, but the commentary on how corporatisation corrupts scientific endeavour is welcome—the first time. After that, it just becomes busywork, and dulls the point that was made in the first place.

Another series of objectives has you photographing landmarks around the city, tying in Peter Parker’s background in journalism and just offering a breather from the combat focus across much of the rest of the game. Again, the first few are noteworthy, but it quickly becomes another mindless checklist, and another set of icons cluttering up the map. (Meanwhile, the few times Pete pulls out his camera as part of a story mission capture the photojournalism angle so much more effectively—why wasn’t this used more?)

But the biggest problem with all the open-world clutter is that it interferes with the pacing of the game as a whole. Spider-Man manages to tell a story that’s both entertaining and thoughtful, but then it undermines that by constantly trying to distract you. Even if you do manage to stay focused, you often can’t literally progress the main story until you clear a side-quest or two (usually framed as Spidey waiting for someone to get back to him with crucial information). The seemingly endless to-do list is also the only way of gathering the “tokens” required to upgrade your suit and gadgets, without which the late-game encounters would be a lot more difficult. When you’re not swinging around Manhattan or checking off items on a shopping list, you’ll be fighting—again, that’s kind of Spider-Man’s thing. Luckily, that combat is almost as satisfying as the web-swinging.

It broadly follows the Batman: Arkham formula: an attack/dodge/grab trinity, where attacks flow seamlessly into one another and you can dodge at almost any time, usually prompted by a flashing Spidey-sense icon to warn you of an incoming attack. But where Batman had his gruff stoicism and arsenal of bat-themed gadgets, Spider-Man has jokes galore and webs to go with them.

Like Batman, Spider-Man‘s combat is all about flow and momentum. When everything goes according to plan, you’ll be darting across the battlefield, sliding under or leapfrogging over goons, dodging bullets, and pinning foes to walls with your webs, all in a seamless sequence of motions. As you level up and unlock more skills, you get even more toys to play with and incorporate into your beat-down ballet. 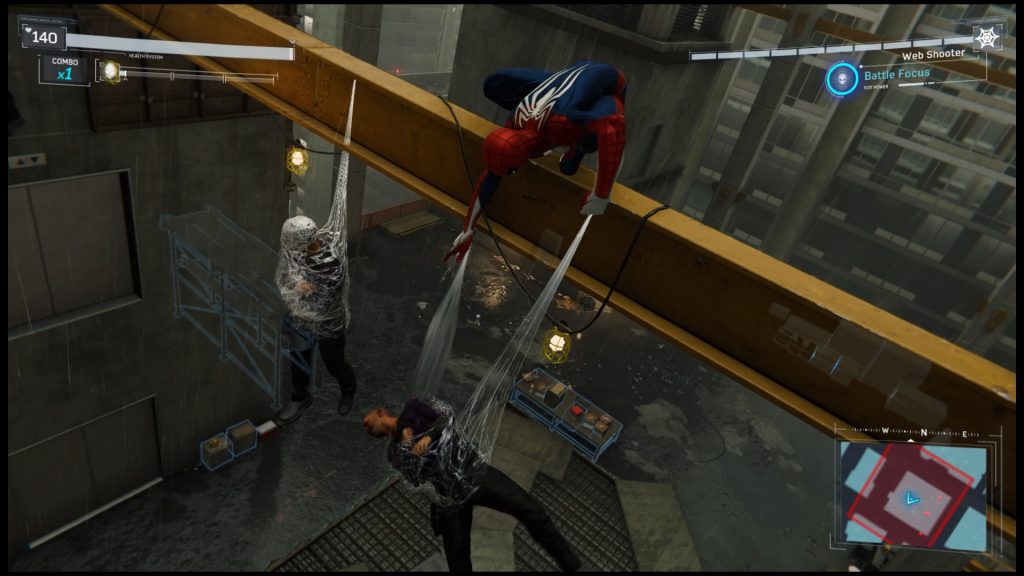 I wish the same could be said about the boss fights, though. Spider-Man‘s combat works best when it’s you versus a horde of small fries, where you can flex your creativity and ride that momentum. Bosses have none of that, and instead all seem to rely on some weak gimmick, like repeatedly dodging attacks until you get a button prompt for a counter or kiting Rhino into things that will stun him for a moment so you can get a few hits in. They’re glorified quick-time events, really, but without the cinematic quality that are the main benefit of quick-time events.

Some missions also allow for a stealthy approach, as you sneak around and quietly web people to the ceiling, lamp posts, or whatever else is handy. There’s a satisfying puzzle-solving aspect to them: you can’t take out an enemy if he’s in line of sight with another or you’ll immediately jump into open combat, so you need to use your various Spidey-Tools to separate foes from the group and pick them off one by one. The enemy AI isn’t great, which saps a lot of the potential challenge out of these segments, but that doesn’t make the stealthy approach any less enjoyable. 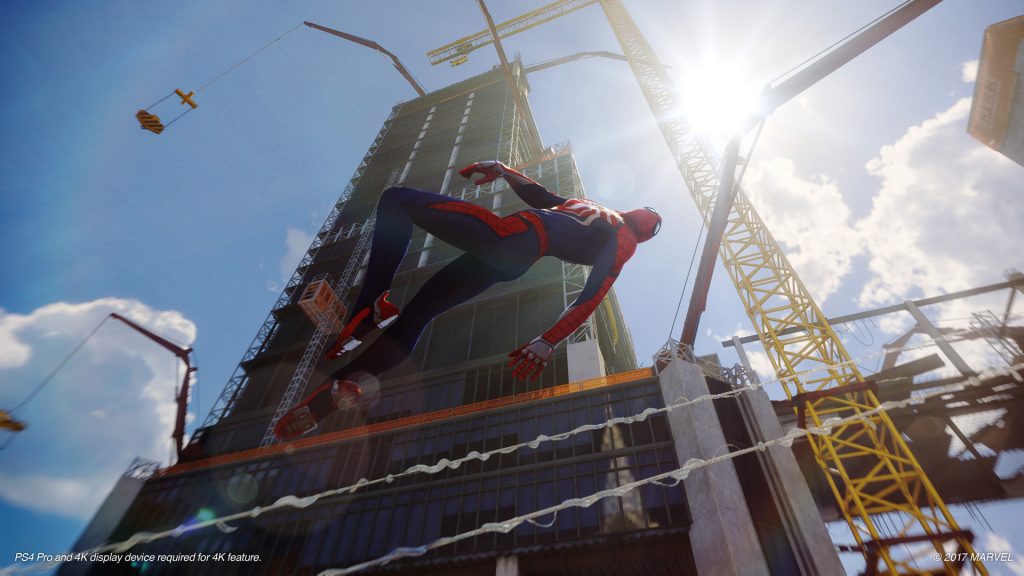 Look past the boss fights and open-world nonsense, and Spider-Man is a very good game indeed. It’s every bit as exciting and entertaining as you’d expect from a blockbuster Marvel game, and it gets the web-swinging just right—something crucial for a Spider-Man game. But the most interesting and most memorable part is what’s there when you look past all the bombast: a story about heroes, not just superheroes.