Few games carry the legacy that Space Invaders does. It’s easily one of the most influential games ever made, being almost single-handedly responsible for the shoot ’em up genre and arcade leaderboards. Almost anyone who was alive in the golden era of arcade games will have some memory of playing “Spacies”, and it helped revitalise the whole game industry after the crash of 1977. Naturally, it spawned a great many sequels over the years, most of which looked to build and expand on the simple gameplay that made the original such a hit.

Space Invaders Extreme is one such sequel. Originally released for Nintendo DS and PSP in 2008, Extreme mixed up the classic formula with a more complex scoring system, boss fights, and super weapons, among other things. Courtesy of Degica Games, Extreme is now available on Steam as well. 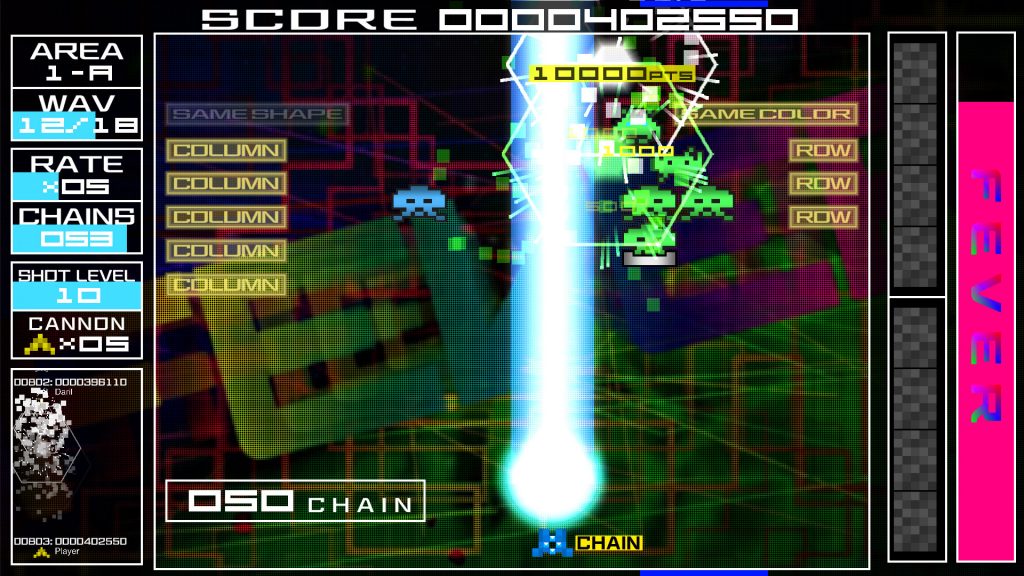 This time, though, your standard cannon fire isn’t your only weapon. Enemies come in a few different colours, and any time you kill four of the same colour in a row, they’ll drop a power-up off a similar hue: a blue laser beam, a red bomb, a green multi-shot, or a fan shield. These super weapons don’t last long, but they’re incredibly powerful, and offer a great way to cull some of the amassing horde.

There’s a small variety of enemies, in addition to the standard invaders. Some have shields that have to be broken before you can hit the alien itself; some split into two or three more enemies when destroyed; some are large and take a few hits to destroy; some are small, nimble, and difficult to hit. Compared with the original Space Invaders, enemies come in a much wider range of formations and can move about much more freely.

Space Invaders Extreme opts for the (now) more standard shoot ’em structure of five levels, each concluding with a boss fight, rather than the endless procession of enemy waves seen in the original. The UI shows you how many waves are left in that level, so there’s always an end in sight. 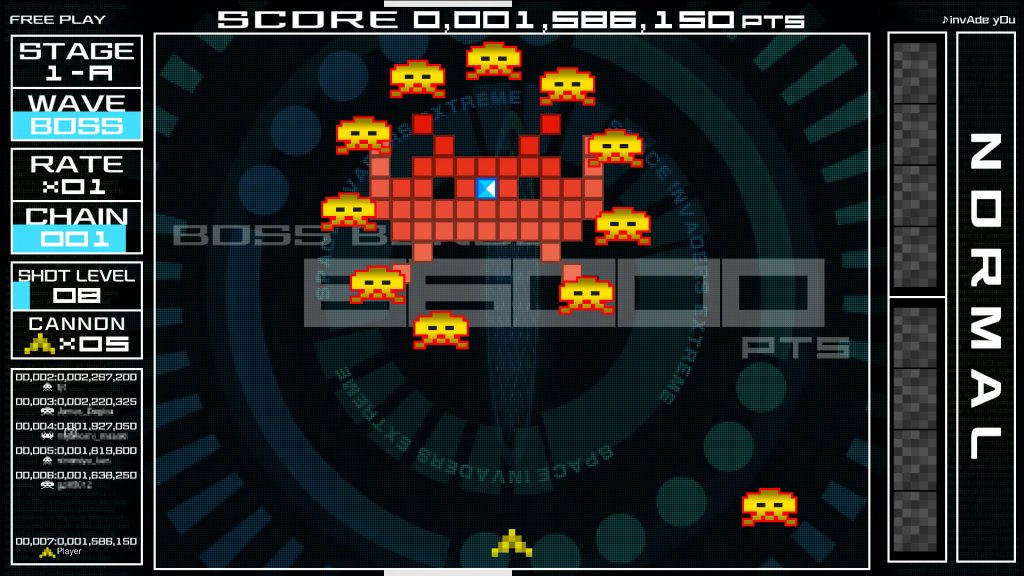 At the same time, it does feel like something’s lost in that. The endlessness of Space Invaders, and that push to see how far you could get before your inevitable failure, is a big part of that appeal. Some sort of endless survival mode could capture that feeling, while still offering the level-based structure e the normal game.

The boss fights, meanwhile, are a delight. Each boss looks like a supersized version of a regular enemy—complete with giant pixels—but each has its own unique attack patterns, weak points, and combat mechanics. Rather than the manic eccentricities of your typical bullet hell boss, those of Space Invaders Extreme feel like a natural extension of basic ideas that run through Space Invaders. They’re great.

Extreme also introduces bonus rounds, which are accessed by meeting certain conditions within a level and then shooting down a flashing rainbow UFO that appears. Do that, and you’re taken to one of a handful of different shooting mini-games with specific conditions; succeed, and you return to the normal level in Fever mode, giving you a score bonus and a supercharged cannon. As you might expect, completing as many bonus rounds as you can is a key to getting a big score. 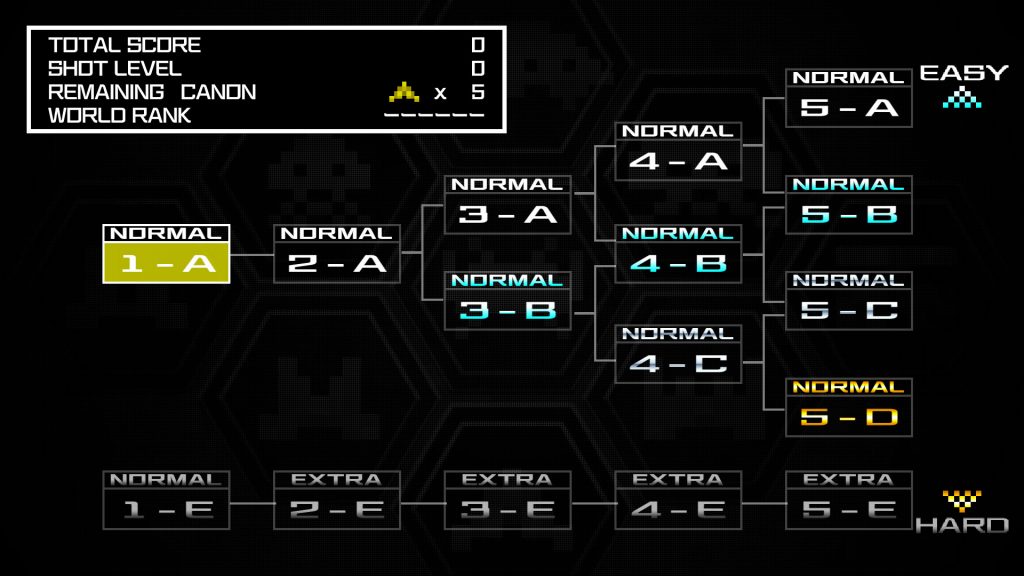 There are a few other tools for racking up the points, too, like a score multiplier that increases as you kill enemies in quick succession. Destroying certain foes in sequence—a whole row, a whole column, 10 of the same type, and so on—lights up one of a handful of different objectives; each one comes with a score bonus, and completing the board gives you a huge stack of points.

Depending how well you perform on a certain level also affects subsequent levels, with more difficult challenges awaiting those who do well. The level structure follows a tree diagram: there’s only one version of Stage 1 and Stage 2, but your success (or not) on those determines whether you go to Stage 3-A (easier) or 3-B (harder). 3-A then leads into 4-A or 4-B, while 3-B leads to 4-B or 4-C, and those three variants of Stage 4 then lead to one of four Stage 5s. As you would expect, the harder levels also come with higher score potential, so there’s a good incentive to push for those trickier routes.

All these different systems add up to a reasonably complex scoring system, but one that—like the boss fights—still feels like an extension of the original Space Invaders rather than something else entirely. 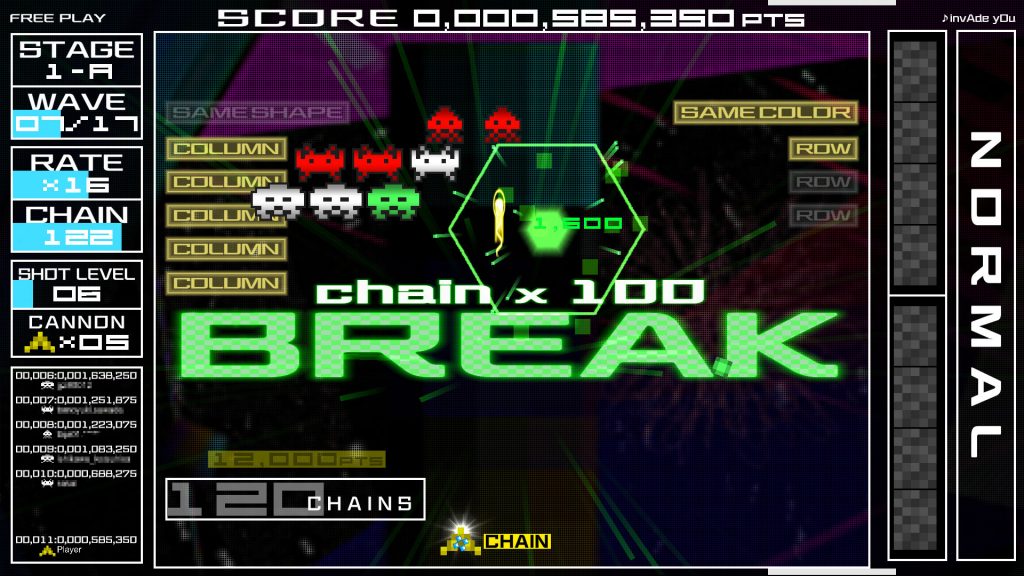 The same can’t be said of the soundtrack, which is a pumping techno score, for better or worse. That’s accompanied by a whole lot of flashing lights and a WinAmp-style visualiser that plays in the background behind the action. Luckily, the latter can be disabled in the options (I’m sure I’m not alone in finding it incredibly distracting), but the rest of the game is still an assault on the senses. This works for a lot of games, shoot ’em ups especially, but I do find it very out of place in a Space Invaders game.

It’s easy enough to turn down the music and fire up some mellow SoulChef beats in the background, though, and there’s a great celebration of Space Invaders beneath all the flashing lights. Space Invaders Extreme is immediately familiar, carrying the spirit of its ancestry while also pushing the series into a modern age.

Space Invaders Extreme is developed by Taito and published by Degica Games. It’s available now on PC, with older versions on Nintendo DS, PSP, and Xbox 360.