When it was announced, SNK Heroines: Tag Team Frenzy quickly became one of my most anticipated games of the year. A crossover fighting game starring women from all across SNK’s roster, it looked like a spiritual successor to the excellent SNK Gals Fighters for Neo Geo Pocket Color. I took it as a given that in a year overflowing with fighting games, this would be one of the best. I was wrong.

SNK Heroines is one of the worst games I’ve ever played.

Its fighting system is woeful, to the point that I’m loathe to even call it a “fighting game”. Its selection of characters are drawn almost entirely from King of Fighter XIV, with models seemingly lifted wholesale from that game, so it’s not so much a crossover game as it is a shallow KoF asset flip. The one character who is actually new (sort of) is a female Terry Bogard, but the game’s handling of her is so aggressively transmysoginistic that I feel sick every time she appears on screen. SNK Heroines tries to be a sexy fanservice game, but the fanservice is so cheaply thrown together and so creepy in tone that it just comes across as exploitative. 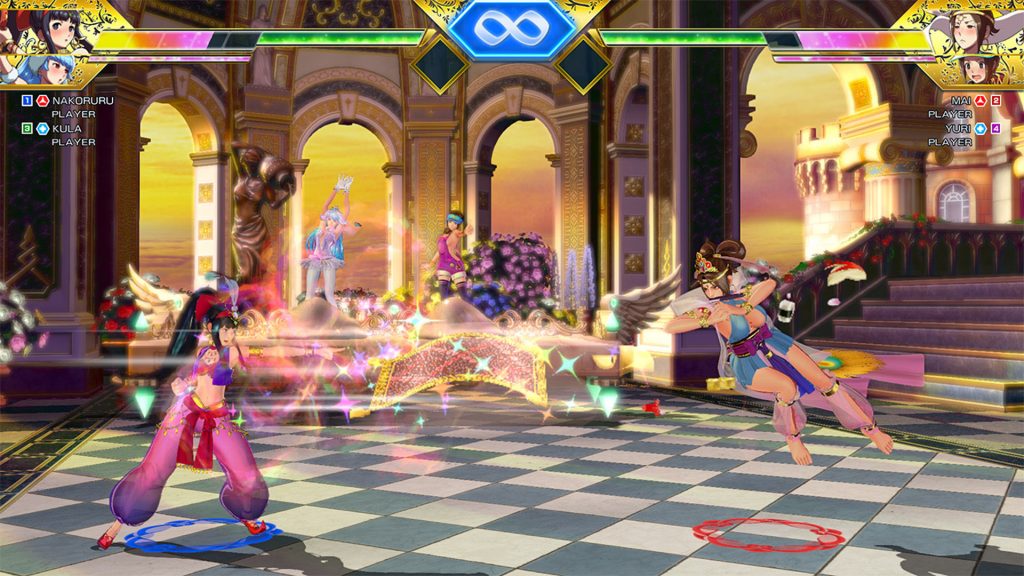 The entirety of SNK Heroines‘ story is that King of Fighters XIV newcomer Kukri has started kidnapping women and imprisoning them in a pocket dimension, where he can dress them up in lewd outfits and ogle them to his perverted heart’s content. Playing as two women captured by him, you have to fight your way through the other captives (why?) so that you can beat up Kukri, rescue everyone you’ve just beaten up, and escape.

There’s almost something subversive in that. Cutscenes all play out from Kukri’s hidden cameras, as he zooms in on your fighters’ breasts and makes weird noises, turning the concept of the “male gaze” into something quite literal. But SNK Heroines never does anything with that; it’s played purely for laughs, while the rest of the game obliviously engages in the exact same objectification of its cast.

Character customisations are cited as one of the big selling points for the game, but they’re so carelessly thrown together that they look more like dollar-store Halloween costumes than anything else. There’s the sexy cop, the sexy cow, the sexy cat, the sexy secretary, the sexy panda, the sexy culturally-insensitive “tribal” outfit… all presented without any sense of care or creativity or thought beyond “mmm, boobs”. 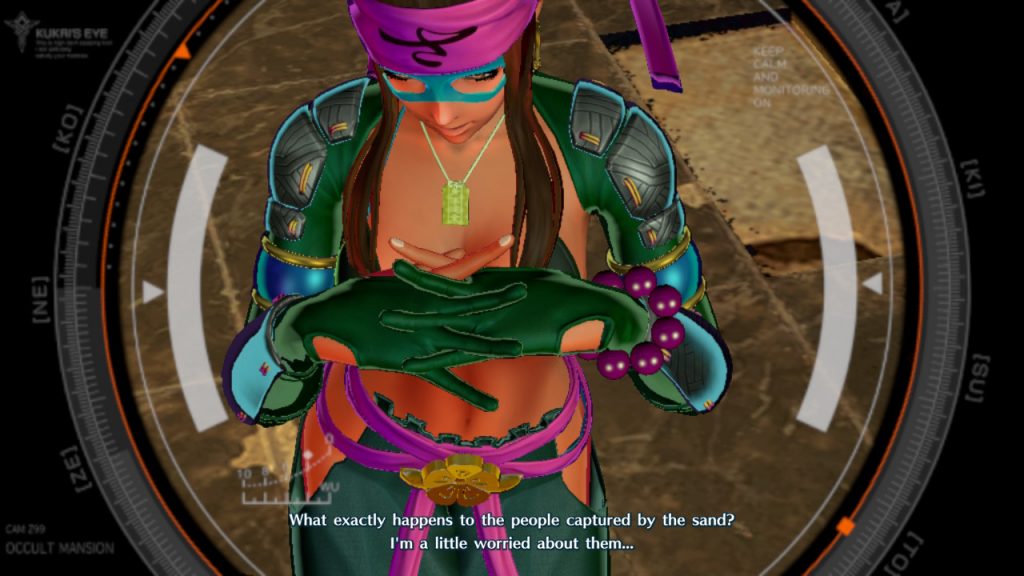 I should point out here that I generally have no objection to fanservice or “titty games”. Guilty Gear‘s Baiken and I-No are some of my favourite game characters of all time, and I like them as much for their provocative outfits as anything else. I still think Gal*Gun: Double Peace is a bona fide masterpiece in lewd satire,  I’ll happily play explicitly pornographic games like Ladykiller in a Bind and Blackberry Honey, and I’ll play Idea Factory’s comically suggestive RPGs till the day I day.

But what all those games have is substance, even if that substance is sexy for sexiness’ sake; SNK Heroines has no substance to its attempts at titillation. It’s simply a meaningless series of “sexy” outfits, seemingly pulled from a cursory “sexy halloween” image search. There’s no thought put into their design and how they relate to the characters wearing them. There’s no thought put into the context of the fanservice, leaving it to fall into uncomfortable, exploitative territory without any effort to explore that. The dehumanizing, thoughtless objectification is especially true with the transphobic trash fire that is SNK Heroines‘ approach to a female Terry Bogard. It’s the old “I turned you into a girl, sucks to be you!” trope, complete with all the infantilization and leering objectification that comes with that. Kukri laughs about having “defanged the Legendary Wolf and turned him into my own sexy bae”, while obsessing over Terry’s new breasts. Terry despairs at the thought of his (male) friends seeing him like this, and his great prize, upon defeating Kukri, is getting to return to his male form.

The messaging in that, intentional or otherwise, is that trans bodies are objects of ridicule, disgust, embarrassment, and fetishistic sexualization. It’s a complete disregard for the humanity and dignity of trans people, and trans women in particular. I honestly want expecting much when female Terry was announced, but SNK Heroines is bluntly transphobic than I ever would have imagined, and that’s something for which SNK should be ashamed. My trans sisters deserve better. 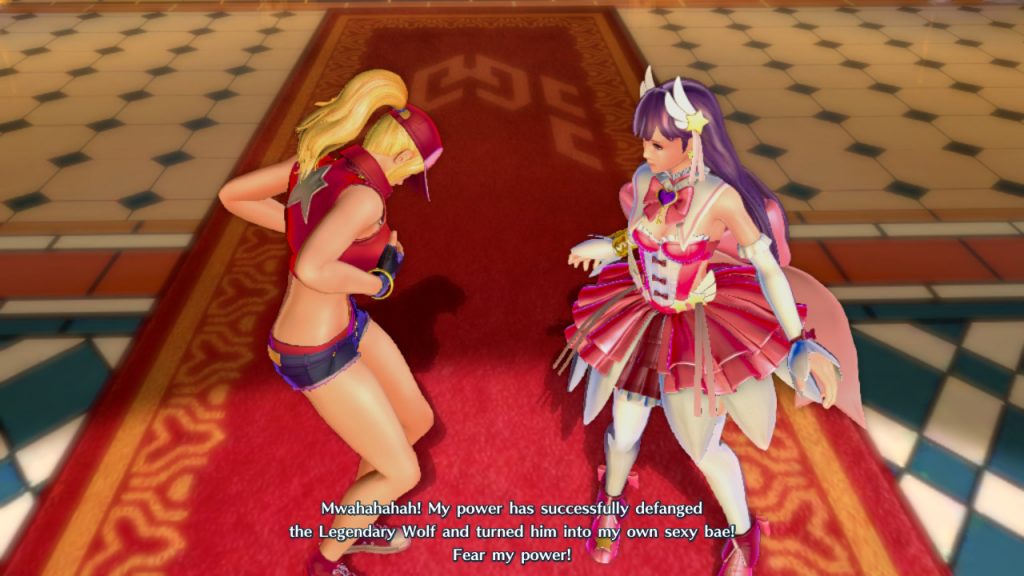 Even if you can look past all the transphobic bullshit and adolescent attempts at sexiness, the game underneath it all is a shallow, aimless mess. SNK Heroines has the admirable making fighting games approachable, but its idea of doing this is to remove everything that makes fighting games interesting and replace them with the most banal systems imaginable.

Without the ability to crouch, SNK Heroines has no possibility for high/low mixups. With a block button rather than blocking by holding back, there’s no possibility of cross-ups (where you  attack from the other side, so that their “back” suddenly becomes “forward” and they have to quickly change direction in order to keep their guard up). With simple chain combos being the extent of most characters’ offence, there’s little room for frame traps or other means of enticing unwise button-pressing from the other player. 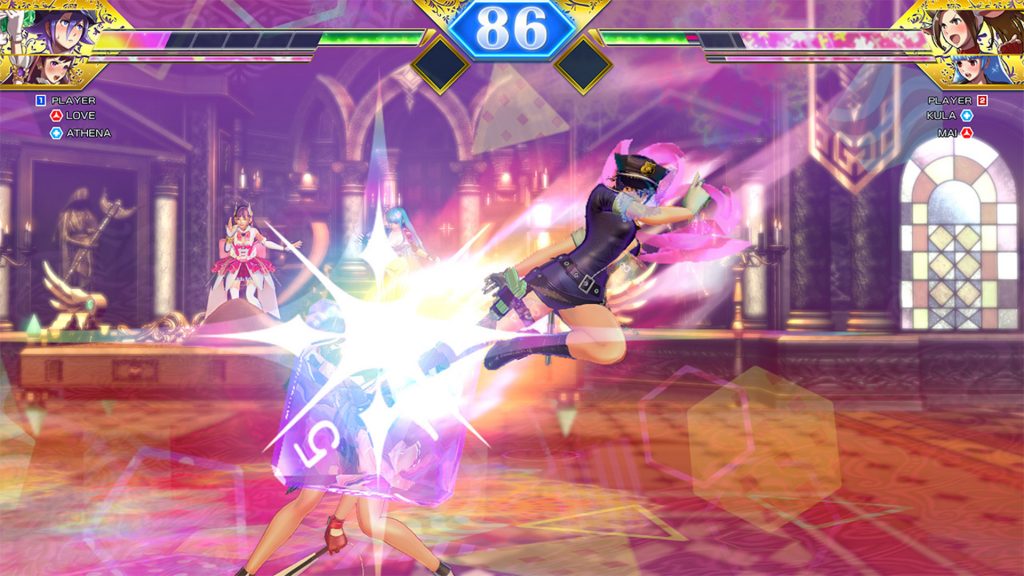 Fighting games are, at their core, about the mind-games that come with trying to open your opponent’s defence and stop from doing the same to you. SNK Heroines neuters that, to the point that a tick-throw—attack, then do an unblockable throw just as they come out of hit- or block-stun—is the most viable tactic available, and that’s something fighting game players solved decades ago.

Related: Blade Strangers does a far better job of simplifying the fighting game structure without dumbing it down. Read our review.

Instead, SNK Heroines throws out the “fun” of randomised items. Assuming your opponent knows how to block, getting lucky with the items that regularly spawn in the arena seems to be the main route to victory. You can use items even while you’re getting beaten down, so as long as you get something that’s actually useful, you get a free opening to drop some damage. It’s a glorified slot machine.

One of the more interesting systems, at least in paper, is how KOs work. It’s not enough to just empty your opponent’s health bar; you don’t win until you land a “Dream Finish” super to finish them off. In practice, that just forces you to play even more conservatively than normal, since Dream Finishes cost a lot of meter, which recovers at a snail’s pace. Almost everything that’s not a basic attack or an item costs meter (and lots of it), too, so unless you want to find yourself with nothing left when you need it most, you’re forced to hamstring your offence. SNK Heroines has so few offensive tools as it is, and the KO system limits that even further. 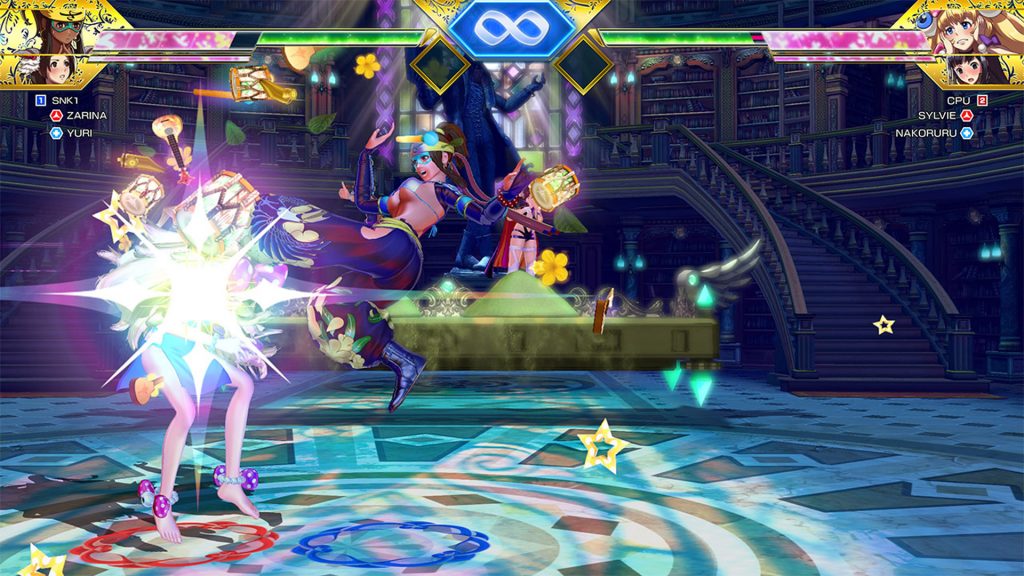 I can see how that might be mildly fun for people who just want to press buttons, but even then, I can’t imagine it holding anyone’s attention for long. For people who like the actual fighting part of a fighting game, SNK Heroine’s multiplayer slot machine falls far, far short of the mark.

The final nail in the coffin is a dearth of things to do in the game. The woeful narrative makes Story Mode a waste of time, and once you’ve seen one character’s story, you’ve seen them all. Online play is limited to casual matches, with no ranked option—fair enough, given how competitively vapid the game is, but it makes the scant multiplayer options look even more dire. There’s a training mode (not that there’s much need for one) and an arcade mode, and that’s it.

I’m usually off the opinion that a good fighting game with limited game modes is better than a bad fighting game with lots of content, but SNK Heroines has neither. Even the character customisation options, which were long touted as one of the main features of the game, are relatively few. 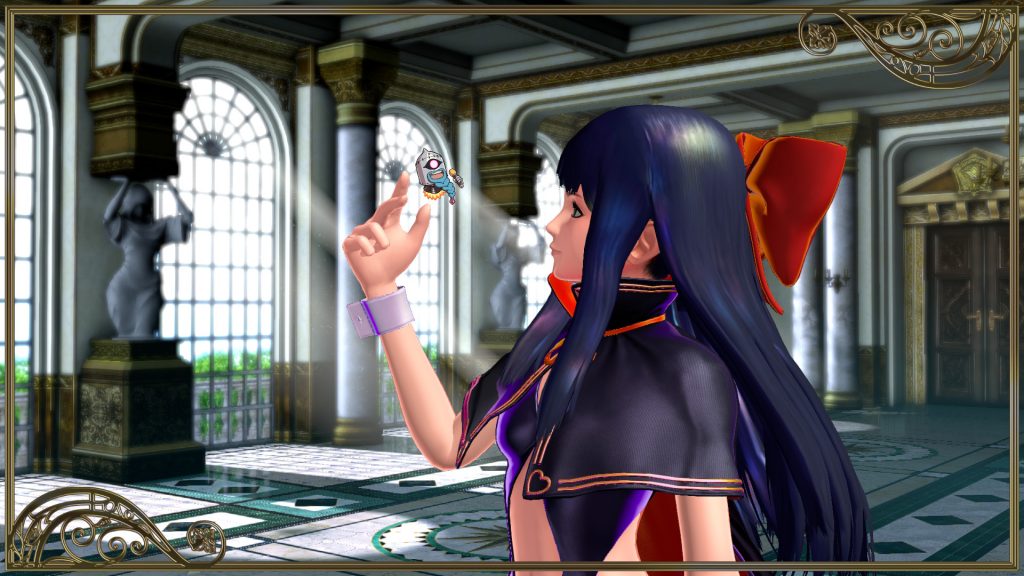 What we’re left with is a game that has no redeeming qualities whatsoever. It fails as a fighting game, whether for a competitive player or a casual one. It fails as a fanservice game, with its hideous outfits and cheap recycling of assets from King of Fighters XIV. Worst of all, it fails as the celebration of SNK’s women that it should have been, falling back on creepy objectification and some of the most appalling transmisogyny I’ve seen in a game in a long time.