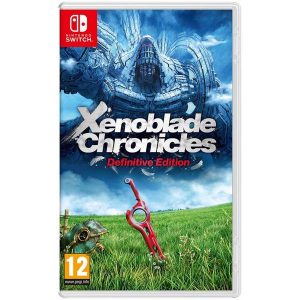 I can’t remember the last time I played a game that so frequently caused me to stop and just admire the scenery as Xenoblade Chronicles: Definitive Edition. From the art direction and worldbuilding right down to the nitty-gritty of its base mechanics, everything works in concert to sell the vision of a wholly unique world. The results are simply breathtaking.

Earlier this month, I shared the story about the first time I found myself out-levelled by a monster by straying, just barely, off the beaten track, and how much that did to make the world of Bionis feel alive. That was just the tip of the iceberg. I’ve since found myself, in a control of a party of level 20-somethings, casually gathering flowers in the midst of a herd of level 90-something beasts that, thankfully, weren’t hostile. While hunting some very sensibly raptor-sized raptors, I suddenly found myself to be a snack for a dinosaur so big it’d make Godzilla feel inadequate (that I somehow didn’t see sneaking up on me). I’ve had a quest deliberately send me sneaking into the den of a swarm of spiders that’d murder me in half a second if I made the slightest noise.

The point of these stories isn’t to suggest that Xenoblade Chronicles is some sort of cruel, unfair sadist that goes out of its way to cause you grief; death amounts to little more than a minor setback, after all. Rather, the point is to demonstrate how this game takes something as seemingly simple as enemy levels and how those enemies are placed within a map and uses that to create a convincing illusion of whole ecosystems. It makes the world feel vibrant and alive. It creates the catalyst for wild, wonderful adventures.

The very structure of the terrain, too, lends to that idea. Xenoblade Chronicles takes place in Bionis, a world named for the enormous titan it’s literally built upon. The legend goes that two giants, Bionis and Mechonis, fought an endless battle, until they shut down mid-combat; on their lifeless forms, new life took shape.

The world’s humanoid form gives it a vertical existence, and much of the game is spent travelling up almost the entirety of the Bionis’ body. Your journey begins in Colony 9, a settlement of Homs (humans, essentially) living on the back of the Bionis’ right calf; from there, Xenoblade Chronicles takes over the giant’s knee, up its leg, around its waist, through its lungs, up its neck, to the top of its head.

With that comes a lot of verticality in the level design of each area. Even in the rolling green fields of the upper leg, steep cliffs and tall spires abound. The Eryth Sea, at the top of the Bionis head, is characterised by a medley of islands floating in the sky and the towering architecture of the elf-like High Entia. That verticality then feeds into the sense of adventure and discovery; it’s rarely a straight path from one point to the next. There’s plenty of scope to go off the beaten path and, if you’re feeling brave, test the limits of a very generous approach to fall damage, or just enjoy diving off a precipice into a glistening sea some few hundred feet below.

Topping it all off is the sheer alien beauty of the world. There’s nothing quite like seeing a swamp full of seemingly normal trees suddenly start to glow when the sun goes down, or navigating rickety treetop bridges while dinosaurs roam the dense rainforest below, or crawling through the murky, flora-filled caverns of a giant’s lung. Even when the latter part of the game sees you leave Bionis for the other titan, Mechonis, in all its industrial, metal gloom, Xenoblade Chronicles‘ world continues to be a source of wonder. It’s a stunning game, and I’m glad that the Switch version is my first experience with it–I can’t imagine how the Wii or 3DS could have delivered on this vision.

The story running through all this is a unique spin on a familiar concept. JRPGs have long grappled with the concept of defying fate and finding your own identity in the process; Xenoblade Chronicles riffs on that by centering its tale on the main character Shulk’s visions of the future, and his efforts to bypass the disaster that his visions almost always predict. His journey is set in motion by two things: he finds himself to be one of the only people in the world able to wield the Monado, a mysterious sword that gives Shulk his visions and is uniquely capable of cutting down the hostile robots from Mechonis; and being powerless to prevent the death of a loved one spurs him on a quest for revenge. He’s both the fated hero, and the person desperately rejecting what fate has in store.

While This is brought into focus with one of Xenoblade Chronicles more unique mechanics: occasionally in battle, Shulk will get a vision of a particularly nasty incoming attack, giving you a chance to protect your party or interrupt the enemy before they can get around to pulling out said attack in the first place. It’s defying fate writ directly into the game’s systems, and it takes on some interesting twists as the game moves along—fate isn’t something that takes kindly to being defied, after all.

There’s one unfortunate side effect of this, though, in that it heavily disincentivises making anyone other than Shulk your party leader. You can only ever directly control your party leader, with the other two characters controlled by AI and no way to switch who you’re controlling during a fight. A lot of encounters—bosses in particular—are built entirely around Shulk’s Monado abilities, but an AI-controlled Shulk often seems to struggle with using the right ability at the right time. The AI for the other characters isn’t great either, but that usually just means less damage output or less efficient healing; leaving Shulk to the AI can be the difference between being able to actually finish a fight.

It’s a shame, because each character is genuinely interesting to play as, with their own unique ways of interacting with Xenoblade Chronicles‘ hybrid real-time / turn-based battle system. Sharla, the main healer in the party, is a sniper who shoots restorative ether bullets (among other damage-dealing shots), but who needs to be careful not to let her rifle overheat. Melia is a spellcasting archetype whose spells all have a dual effect of buffing the party and dealing damage, but not at the same time, so you need to juggle your priorities. Dunban is a tank who relies on dodging rather than heavy armour, with an assortment of different attacks that are designed to combo off one another. There’s so much fun to be found in exploring each character’s combat style, but at least the first time through the game, when you don’t know what’s around the next corner and whether controlling Shulk is going to mandatory, it’s hard to give the rest of the team much attention.

Aside from the revamped visuals, which I’ve already gushed about plenty, Xenoblade Chronicles: Definitive Edition adds a few new touches. Chief among these is “Future Connected”, an epilogue chapter focusing on Shulk, Melia, and a couple of new characters, taking place in a new area of Bionis. It doesn’t quite have the same dramatic highs and lows as the main story, but it’s a nice way to spend a dozen or so extra hours in the world of Xenoblade Chronicles, and for those who’ve already played the original, you have the option of jumping straight into the new chapter. There are also new Casual and Expert modes (across both the main story and Future Connected), giving players a couple more options for tailoring the difficulty level.

Those are all welcome additions, but the biggest achievement of Xenoblade Chronicles: Definitive Edition is how well it delivers on Monolith Soft’s vision for this world. It’s a game that constantly tempts you to explore, to get lost in its beauty—and it looks more stunning than ever.

If you liked this review and plan to pick up Xenoblade Chronicles: Definitive Edition, you can support Shindig buy getting it from nzgameshop.com with this affiliate link.

Xenoblade Chronicles: Definitive Edition is developed by Monolith Soft and published by Nintendo. It comes out 29 May 2020 for Nintendo Switch.