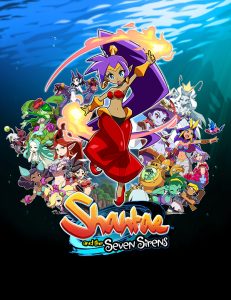 Few games are as consistently charming and delightful as a Shantae game. The eponymous half-genie hero is one of the most endearing characters you’ll meet, and her adventures are full of humour, oddball characters, and fantastic places to explore. That’s been the way since the original Shantae first launched back in 2002, and it’s as true in her latest outing, Shantae and the Seven Sirens.

What starts as a fun tropical island holiday so that Shantae can be part of a “Half-Genie Festival” soon takes a disastrous turn when all the other half-genies in attendance suddenly disappear in the middle of a performance. As the only one left—and with her well-established penchant for heroics—Shantae sets out to find and rescue the others, a journey that takes her into the depths of a mysterious sunken city beneath the island, where she butts heads with the mythical Seven Sirens who rule it. Cue a classic Shantae quest.

In a lot of ways, Seven Sirens is a return to the series roots. The first three games all took a non-linear, exploration driven approach bolstered by the discovery of new transformations, genie magic, and tools allowed Shantae to reach new places and explore further afield. Shantae: Half-Genie Hero took a more linear approach with discrete levels with little scope to go off the beaten path; for all the rest of that game’s charms, the linearity of it was a bit disappointing.

But Seven Sirens is a full-blown metroidvania once again. Most of the game takes place in the sunken city, an interconnected network of sewers, caves, and waterways. Right from the outset, it’s clear that this game wants you to explore, with an abundance of all those little things to tease you to come back later—treasure just out of reach, obstacles that you’ll clearly be able to get past once you have the right tools, and those telltale incomplete rooms on the map.

The ability to venture further (and deeper) afield comes from new spells that Shantae learns by sharing magic with the other half-genies she rescues. Transformation remains one of Shantae’s defining abilities, but all her previous forms are gone—in their place is a new set of aquatic-themed ones that largely function the same but better fit the game’s underwater vibe. Instead of turning into a monkey to climb walls, you turn into a newt (that can also dash short distances through the air to extend Shantae’s jump distance); instead of double jumping with a cannon, as in Shantae and the Pirate’s Curse, you do so by turning into a squid and propelling yourself with a blast of ink.

That’s not to say Shantae isn’t without new abilities. The new Gastro Drill form allows her to dig through sandy ground, and with new, non-transformation-based genie magic she can reveal hidden platforms and enemies, purify poisoned water, send out a bolt of electricity, and even cause earthquakes—all of which, naturally, come in handy for exploring every corner of the map.

One nice touch in Seven Sirens is that transformations are now automatic and tied to specific buttons, rather than having to be manually selected through a menu or activated through a dance minigame. As an example, pressing ZL activates the Newt Dash move, shifting you to newt form in the process and automatically clinging to any wall you dash into; as soon as you land on solid ground again, you switch back to human form automatically. Belly dances aren’t done away with, and are instead used for Shantae’s other spells. It’s a nice way of retaining an important part of Shantae’s character while getting rid of the nuisance that could crop up in older games when you wanted to rapidly switch back and forth between different forms.

Shantae and the Seven Sirens also lets you augment Shantae’s abilities using collectible monster cards. Each monster has a chance of dropping its card when defeated, and once you have enough—the specific amount varies from creature to creature—you unlock the associated boost. The abilities themselves are handy, if not game-changing, which works together with the limited number you can equip at once to encourage experimenting with different loadouts. It’s a welcome little bit of customisation that we haven’t really seen much in the series before.

In true Shantae fashion, Seven Sirens tells a story that’s both completely over-the-top and full of silly humour, but earnest and heartfelt, too. Shantae has grown a lot over the course of previous games, from a shy girl who hid her genie heritage from the world for fear of being labelled an outsider to someone who’s mostly found her place among friends. But she still has those insecurities and questions about the parents she never knew, and meeting a bunch of other half-genies really brings those to the fore. When they all get spirited away, Shantae’s drive to save them isn’t just her heroic nature at work—it’s because she’s finally found people who can understand her experience in a way that even the most well-meaning friends can’t, and quickly formed a kinship as a result.

At the same time, it’s a game that has a whole story arc about characters getting turned into into action figures and packaged up in mint condition. It’s a game where Squid Baron, a recurring character who’s aware of (and very insecure about) his role as a mid-boss, who this time is trying to raise funds to make his own version of a Shantae game where he’s the main character. As earnest as it can get, Shantae and the Seven Sirens isn’t a game that takes itself seriously at all, and that sense of humour goes a long way.

One nice new touch this time around is animated cutscenes sprinkled throughout the game. There’s an extremely stylish opening movie done by Studio Trigger (of Little Witch Academia and Kill la Kill fame), and each new boss is introduced with a short anime-style video to build up excitement and give a little tease about what to expect from the encounter. They’re a lovely complement to the gorgeous sprites, backgrounds, and artwork that make up the bulk of the game.

Shantae and the Seven Sirens is classic Shantae, full of charming characters, humour, a colourful world, and a sense of exploration. There are some welcome tweaks and new ideas to the basic formula, but after Half-Genie Hero‘s very different take, Seven Sirens is exactly the return to form I was hoping for.

If you liked this review and plan to buy Shantae and the Seven Sirens, you can support Shindig by getting it from the Humble Store using this affiliate link.

Shantae and the Seven Sirens is developed and published by WayForward. It’s available now for Nintendo Switch (reviewed), PlayStation 4, Xbox One, PC, and Apple Arcade.