It’s been almost 30 years since the original Raiden helped give birth to the modern shoot ’em up. With Raiden V: Director’s Cut, the series finally makes its debut on PlayStation 4. The core ideas haven’t really changed even since the 1990 arcade game, but they don’t need to—the classic shoot ’em up formula is an endlessly enjoyable one, and Raiden V captures that wonderfully.

The basic premise is the same as any other shoot ’em up: at the helm of your chosen fighter jet, you shoot your way through waves of enemies, dodging their bullets and collecting power ups along the way. At the end of each level is a boss with a bigger health bar and more complex bullet patterns to avoid, and you have a limited supply of bombs that you can use to clear the screen of bullets and give yourself some breathing room.

One of the Raiden series’ unique qualities is the ability to switch between and upgrade different weapons. Usually , you start with a simple spread-shot vulcan cannon, and certain power ups can either level up that gun or, by avoiding the pick up long until it changes colour, switch to either a narrow, powerful laser or a homing plasma beam. Whatever you choose, you’re such with it until the next time a power up item drops. This system adds an element of strategy; you have to make decisions on the fly about what weapon to use in a given situation, and whether an upgrade or a switch will serve you better. This has been the case since the original Raiden, but Raiden V mixes things up by giving you three variants of each weapon type. As well as the standard vulcan cannon, for example, there’s a “swing” style one with a narrower spread that follows the player’s movements, and a powerful but tricky-to-use “moving vulcan”. The default laser has a narrow, powerful beam, but there’s also the option of a charged beam that gets bigger the longer you fire it, or a “reflect laser” that spins like a windmill. Plasma beams come in homing, arcing, and grappling versions.

Rather than all being available in one game—which would get difficult to manage—Raiden V had you chose three weapons at the start of each run, one of each type. Changing between your chosen weapons works like it does in any other Raiden game, by picking up coloured power-ups, but the particular weapons you’ve chosen will influence when you choose to switch. There’s a lot of fun to be had in trying different combinations of weapons, especially when you factor in the three different fighter jets available to you: the balanced Azuma, the sturdy Spirit of Dragon, or the nimble Moulin Rouge.

Raiden V also introduces the Cheer system, which lets you indirectly interact with other players as you play. When other players hit certain milestones, like reaching a certain score of finding a collectible, you can cheer them in by pressing a button; likewise, other players can cheer you on in the same way. This helps fill up the Cheer Gauge, and when full, you can unleash a “Cheer Attack” that powers up your ship’s weapons for a short time. The gauge fills even without being cheered (albeit at a slower rate), so you can still use Cheer Attacks when playing offline. The system doesn’t have a dramatic impact on the game, but the sense of community and camaraderie it creates is a nice touch. 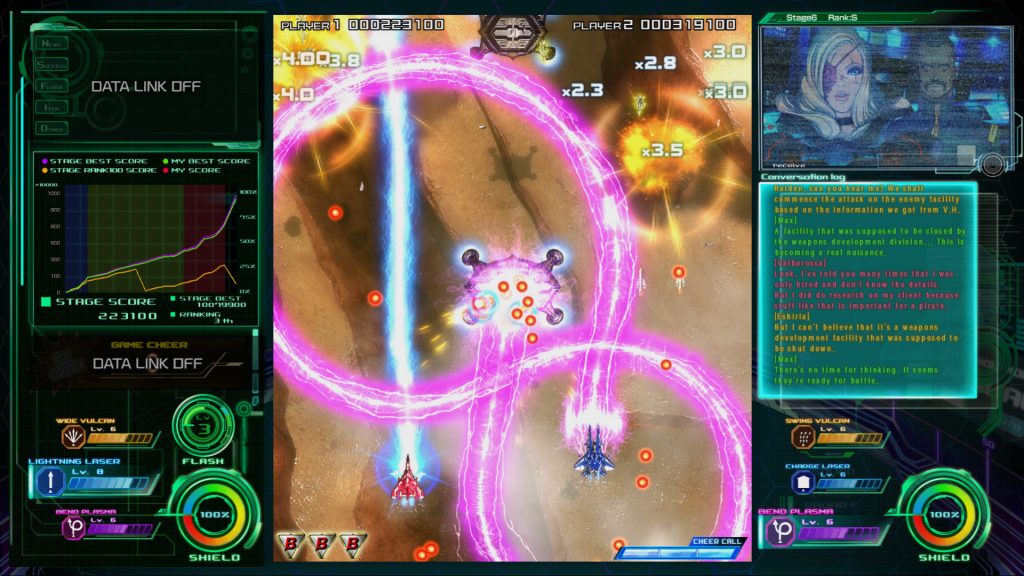 There are two main play modes in Raiden V: Story Mode and Boss Mission. Story Mode is basically an arcade mode; after choosing your ship and weapons, you fight your way across eight stages, each culminating in a boss fight. The enemies you encounter along the way are pretty typical Raiden foes, from ground-based tanks to attack helicopters to more burly fighter jets. Bosses aren’t the most creative or memorable as far as bullet hell shooters go, but they pose plenty of challenge nonetheless, especially on higher difficulties. If you want an easier time of it, there are also a handful of easy difficulty settings with unlimited continues, and even a practice mode where enemies don’t shoot.

As the “Story Mode” terminology suggests there’s a heavier narrative focus in Raiden V, but this is where the game’s at its weakest. The story itself is rather bland, forgettable “stop the alien assault” fare, which is fine (and typical of the genre). The problem is that it’s delivered almost entirely through non-stop dialogue during each mission, when you can’t really play attention to it because you’re otherwise focused on dodging a hail of bullets.

On top of that, the default sound levels make it almost impossible to hear the chatter over the music, and the chat log is inconveniently located off to the side of the screen. The story has some minor branches depending on how well you play, and a few different endings to uncover. Sadly, none of these is particularly memorable, even once you get passed the challenge of finding a way to follow what’s going on. I like the idea of more narrative-heavy shoot ’em ups, but Raiden V‘s execution leaves much to be desired. 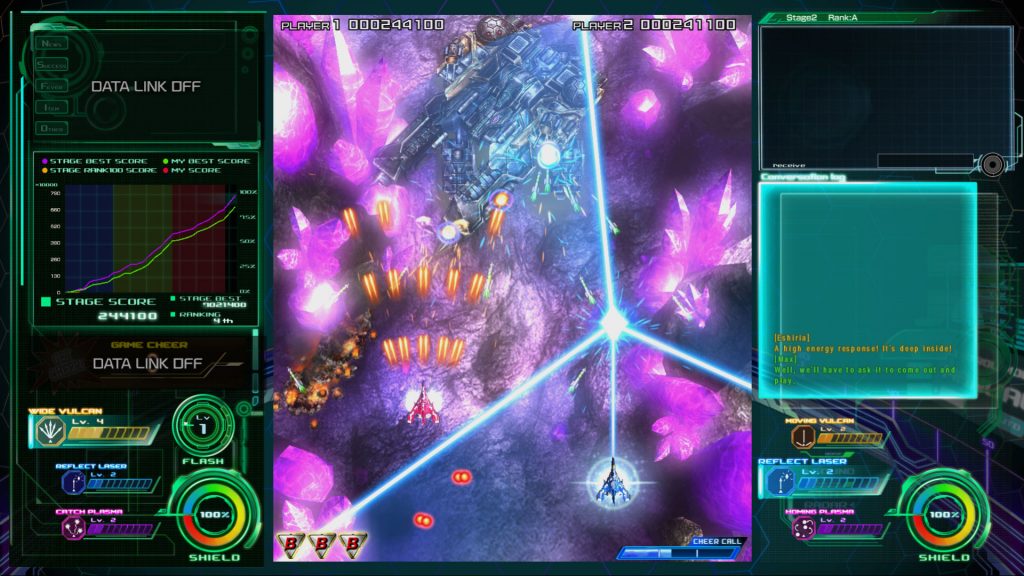 Weak as the story itself is, it lends itself to some stunning visual design as far as backgrounds go.  Raiden V takes you across the world, from the skyscrapers of Manhattan, to a Middle Eastern desert, from a stunning French lake to an alien crystal cavern. Rather than the simple, flat, strictly top-down scrolling of older Raiden games, Raiden V‘s backgrounds are a lot more cinematic, with plenty of sweeping camera movements and changing perspectives. To be honest, the backgrounds can be a bit distracting the first time around because they almost overshadow the action, but they’re a sight to behold nonetheless.

Boss Mission, meanwhile, has you facing individual bosses under special conditions, like having reduced health, limited time, or a specific ship configuration. There are some 65 different missions available, which you unlock by playing through the different routes in Story Mode. As you might expect, these fights get rather difficult—I don’t think I’ll ever be able to complete them all, but they’re a nice change of pace for people who enjoy that challenge.

Aside from my little gripes with the story, Raiden V: Director’s Cut is a thoroughly enjoyable shoot ’em up. It sticks closely to the series formula while tinkering around the edges just a little bit, resulting in a game that feels like a throwback to the ’90s, but without feeling dated. The PS4 is oddly lacking in scrolling shooters, so this is a welcome addition indeed.

If you enjoyed my review and plan to buy Raiden V: Director’s Cut, you can support Shindig by using this Amazon affiliate link.

Raiden V: Director’s Cut is developed by Moss Co. Ltd. and published by UFO Interactive Games. It’s available now for PlayStation 4 (reviewed) and PC, and PC. Raiden V is available on Xbox One.