Ōkami has been one of Capcom’s most beloved games since it first released more than a decade ago, and it’s easy to see why: a beautiful art style, rich story, and Zelda-inspired gameplay all combine to create one of the most captivating games of the PlayStation 2 era. Strangely enough, despite being so popular and being right up my alley, I’d never actually played Ōkami until the PlayStation 4 re-release of Ōkami HD. Put simply, the game blew me away, and I can finally understand why it’s got the following that it does.

Ōkami draws heavily on classical Japanese mythology, with the sun god Amaterasu—taking the form of a white wolf—at the game’s centre. When the land of Nipphon is shrouded in darkness by the legendary eight-headed serpent Yamato-no-Orochi, Amaterasu finds herself roused from a hundred-year slumber in order to stop the beast.

She’s not alone in her journey. Soon after waking, she meets a pint-sized wandering artist named Issun, who serves as something of a guide and companion. A drunken warrior named Susano becomes an unlikely ally in Amaterasu’s quest, as do the goddesses Sakuya and Kaguya. 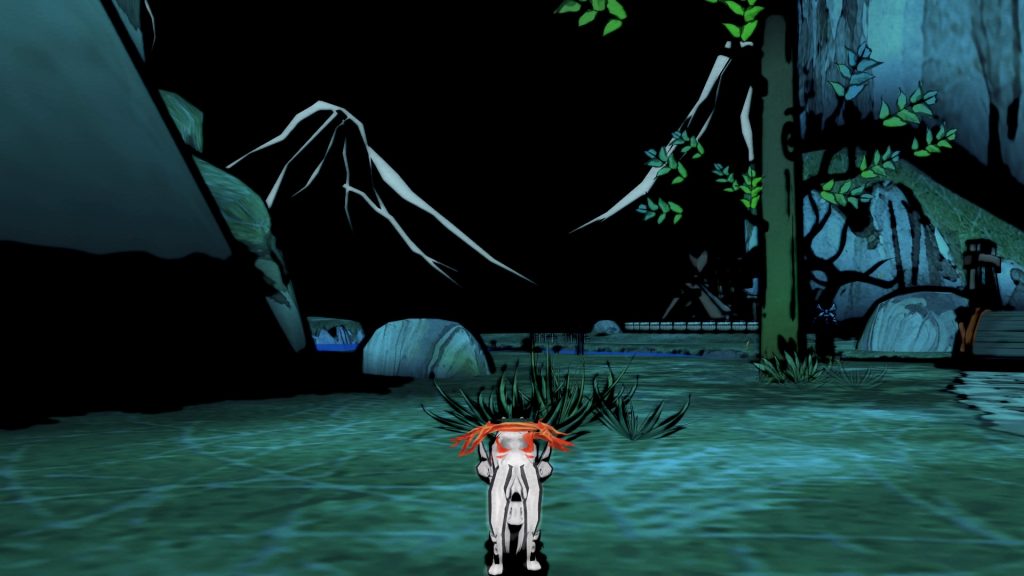 To anyone versed in Japanese folklore, these will be familiar names, though Ōkami puts its own spin on things. As the legends go, Susanoo is the god of storms and brother to Amaterasu; it’s said that he fought and slayed Orochi by using sake to lull the snake into a drunken slumber, before cutting off the heads one by one. In the game, Susano is a human with no direct relation to the sun god, and rather than being the sole hero, it’s his cooperation with Amaterasu that eventually leads to Orochi’s defeat.

Likewise, Issun is based on Issun-bōshi, the “One-inch Samurai” of Japanese fairy tales, but with a few unique points of difference. For one, Ōkami‘s Issun is an artist rather than a samurai, and he’s a sort of roguish anti-hero who serves as comic relief for much of the game. Ōkami‘s Sakuya is central to a large series of events around restoring life to the trees and plants, in keeping with her mythological role as a symbol of life and nature. Ōkami‘s Kaguya, as in the The Tale of the Bamboo Cutter, is a princess from a tribe of people from the moon.

Related reading: Our review of God Wars: Future Past, another gorgeous game built in celebration of classical Japan.

The point I’m making here is that Japanese folklore, history, culture, and mythology runs through every vein of Ōkami HD. At the same time, you don’t need to be a scholar of the classics to enjoy and appreciate the game, because it’s a very approachable and modern interpretation of those timeless stories, with enough of its own ideas thrown into the mix to feel fresh and new. It’s very similar to last year’s God Wars: Future Past in that sense (though the original Ōkami pre-dates God Wars by quite a few years). 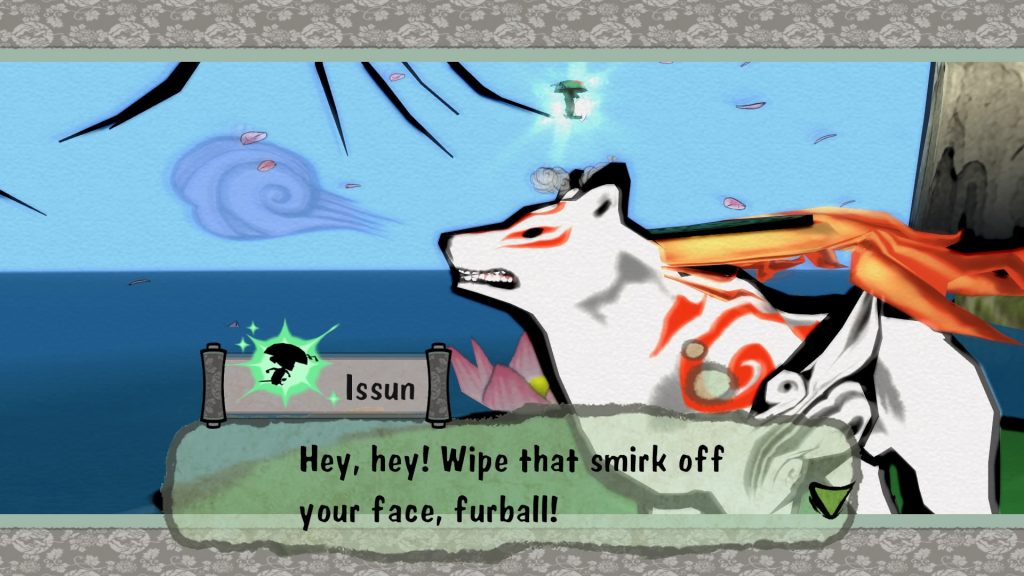 In keeping with this approach, Ōkami‘s art style is inspired by sumi-e, a style of ink wash painting with roots in Zen Buddhism. Sumi-e is notable for its flowing brush strokes and focus on nature in its subject matter; Ōkami takes those ideas and brings them to life in a way that only a video game can. Where other games would have particle effects, Ōkami has sumi-e: a trail of ink behind you when you jump or attack, a blossoming of flowers around your feet when you land. The whole game feels like a sumi-e painting in motion, and that’s truer than ever with this latest release Ōkami HD, powered as it is by modern hardware.

Sumi-e isn’t just an aesthetic element, though; it’s the cornerstone of Amaterasu’s abilities and, by extension, of the game itself. The sun god wields what’s known as the Celestial Brush, with which she can invoke a variety of powers by painting ink into the world. Initially, her only power is Sunrise—by painting a circle in the sky, she creates sunlight, which can disperse dark shadows and give energy to plants. As you progress through the game, encounters with the “Celestial Brush gods” expand Amaterasu’s repertoire, letting her mend broken structures, cut through rocks and enemies, blow open cracked walls, and so on.

This progression of abilities is where Ōkami‘s Zelda influence is most apparent. Rather than just ways to dish out more damage or fight better, the Celestial Brush powers give Amaterasu new ways to interact with the world, in much the same way as Link’s tools in the various Legend of Zelda games. In turn, these give her allow to solve puzzles and work her way through a variety of dungeons, find secrets, and generally reward exploration. 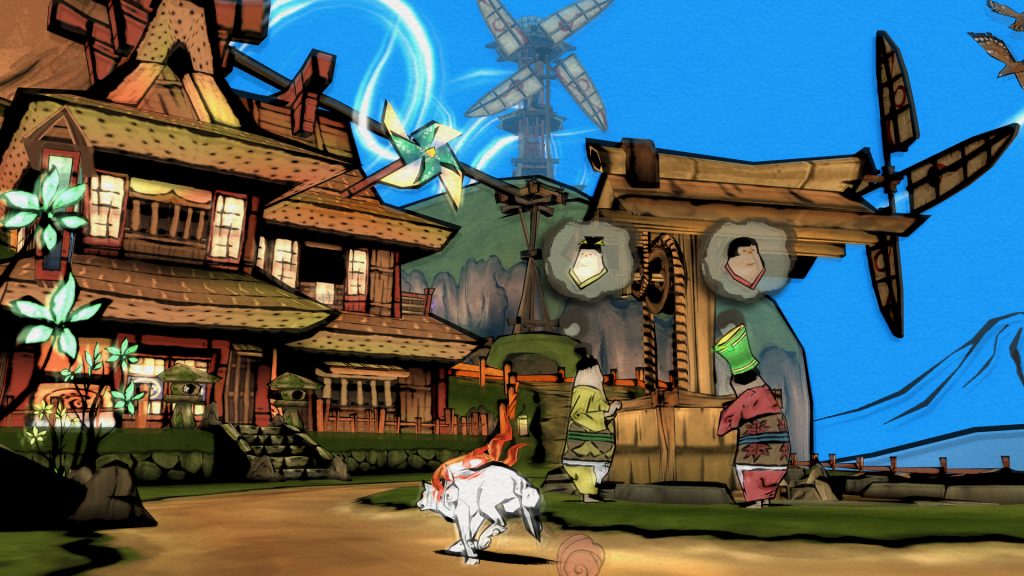 Combat also plays a big role in Ōkami, as you’d expect from a game directed by the guy who created Devil May Cry and Bayonetta. Battles put a big focus on chaining attacks together and dodging incoming blows, while the Celestial Brush lets you pull of special moves or break through enemy guards. Rather than fighting foes out in the field as you would in most action-adventure games, Ōkami HD‘s encounters are isolated affairs, and how well you perform affects how much yen you get as a reward.

Though combat is a lot of fun, you can also avoid a lot of it if you’re so inclined. Encounters are triggered be engaging dark scrolls floating around the field, and these are relatively few and easy to bypass. You don’t earn experience points through combat, and there are plenty of other ways to gather money, so you don’t risk disempowering yourself by avoiding fights the way you would in a typical RPG. Naturally, boss fights are mandatory, and a fair few unavoidable battles crop up in the course of the story, but Ōkami doesn’t need to be a combat-heavy game if you don’t want to be.

I have one small bone to pick with Ōkami HD, though: the camera is a pain, to the point of being a distraction. To make matters worse, the default camera settings are the opposite of what’s become standard—this game’s “inverted” is most other games’ “normal”, and vice versa. Worse still, you can only change camera settings at the start of a new game, and there are a lot of cutscenes to skip through if you find that things aren’t quite right and you want to try a change. These problems are no doubt a product or the original Ōkami‘s age, but it would have been nice if Capcom had found some way to make things smoother for the new release. That’s a fairly minor complaint, though; a mild inconvenience in an otherwise remarkable game. If you’ve never played Ōkami before, then Ōkami HD is the perfect opportunity to discover one of the game industry’s most iconic works. And if you’re an old fan, there’s no better time to join Ammy on another adventure.

If you enjoyed this review and plan to buy Ōkami HD, you can support Shindig by using this affiliate link.

Ōkami HD is developed and published by Capcom. It’s available now for PS4 (review), Xbox One, and PC.