The original Ni no Kuni was always going to be a beautiful game, both visually and tonally—it was, after all, made in collaboration with Studio Ghibli. That partnership ended before Ni no Kuni II: Revenant Kingdom came along, though, and I know a lot of people, myself included, were concerned about the direction the new game would go.

All those worries are unfounded, though: Ni no Kuni II is every bit the masterpiece that it’s predecessor was, and even without any direct involvement from Ghibli, the anime studio’s influence can still be felt heavily. The result is a deeply moving and thought-provoking JRPG, full of magic and wonderment that’s hard not to get lost in.

Like it’s predecessor, Ni no Kuni II begins with someone from the “real” world being whisked away to a fantasy world full of swords, sorcery, and anthropomorphic animals. This time around, our hero is the President of the United States (a fictitious one, thank the gods, and an all-around decent bloke). After being caught in what appears to be some sort of terrorist attack, President Roland wakes up in another land.

Shortly thereafter, he meets Evan, the child king of a city state called Ding Dong Dell. Evan’s been king less than a month, following the death of his father, and at the time of Roland’s arrival, Ding Dong Dell is in the midst of a coup led by one of the former king’s advisors. Despite his strange circumstances, Roland sees fit to take Evan under his wing, and together they manage to escape the war-torn kingdom. 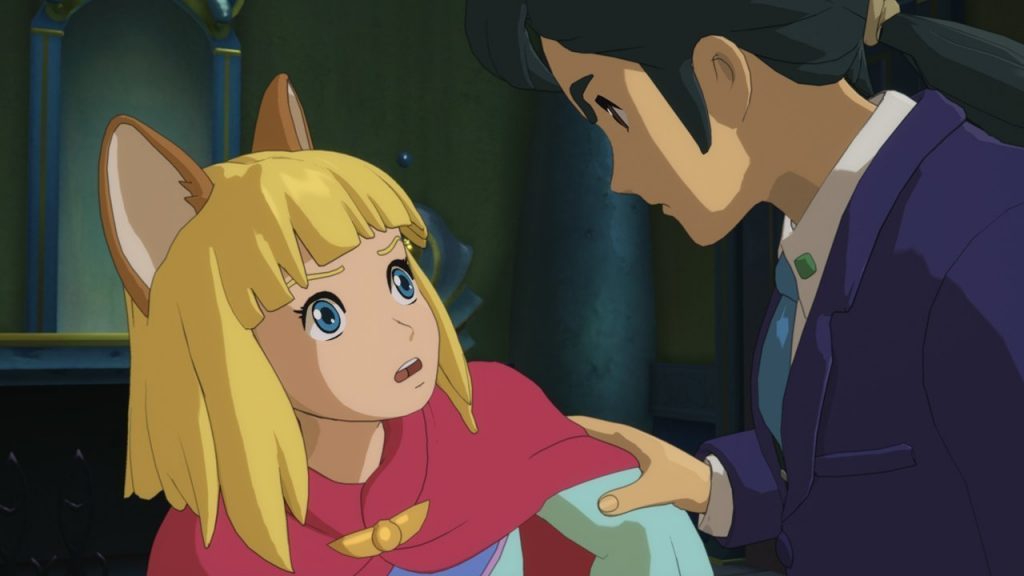 Most games would use this as the motivating factor for some sort of tale of revenge, or at least a quest for the young king to return to his throne. That’s the case initially, but it doesn’t take long for Evan to set a far more aspirational target: he’s going to create a brand new kingdom, one where everyone can live in peace and happiness. Ultimately, he plans to end his world’s endless warmongering by uniting each and every nation under his peaceable rule.

If you can look past the colonial underpinnings—which are almost certainly unintentional, and not something the game ever really explores—Ni no Kuni II tells the simple, heartfelt story of a bright-eyed young boy trying to save the world the only way he knows how, and learning to be a leader that everyone can look up to. His new kingdom, Evermore, is a place where everyone is welcome, and where nationalistic and racial divides are checked at the door. In a sense, you could even say it’s a kingdom of refugees; most of the game follows Evan, Roland, and their growing band of friends as they travel the world, freeing city after city from tyranny and finding allies in their peaceful cause.

Roland’s place in all this is as an advisor to Evan, given his experience with leading a country. He also serves to draw a comparison between Ni no Kuni I’s fantasy world, and the real world around us. Nationalism, isolationism, and far-right extremism are rampant—just look at Brexit, Trump’s America, or the current state of Australia. Such is the case in Evan’s world too, but with his new kingdom and the support of his friends, the young king sets an example of unity and cooperation. 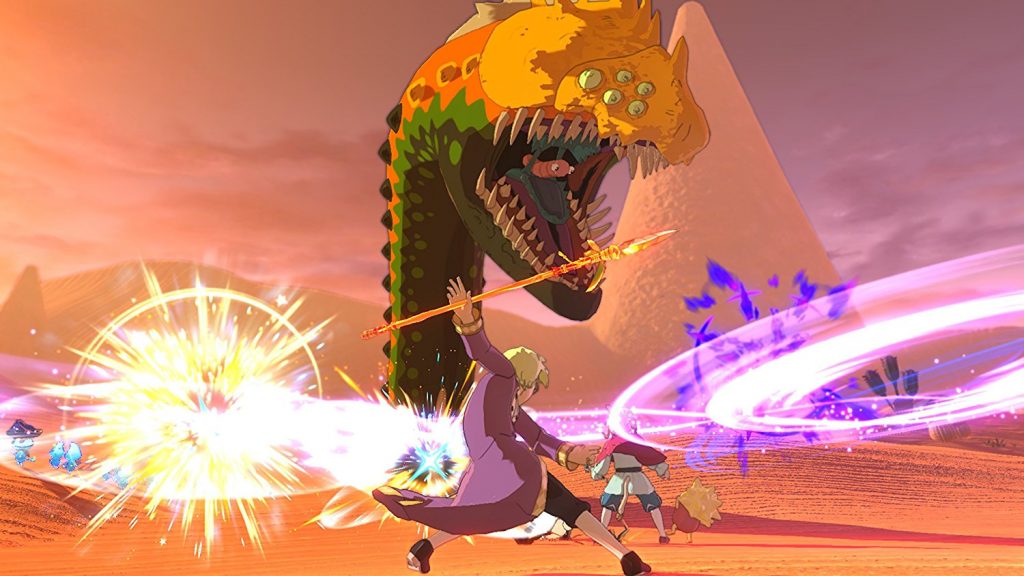 It’s here that the colonialist undertones in Ni no Kuni II are most apparent: in the fiction of the world, Evan is unquestionably “right”, and bringing the rest of the world into the arms of Evermore is the apparent secret to world peace. The reality of this is a lot more complex—just look at the history of the British empire and its effort to bring “civilisation” to the world—but for better or worse, Ni no Kuni II simplifies it to a classic story FF good and evil: there’s a sinister force driving all the conflict from behind the scenes, and by liberating different cities and nations from that force, Evan allows each community to thrive as part of Evermore.

The benefit of that simplicity is that the game paints a clear, stark picture of an increasingly unified world. Nobody is conquered by Evermore and cultures aren’t crushed; instead, the new kingdom becomes a bastion of compassion, peace, and multiculturalism. There’s a lot we can learn from that.

Ni no Kuni II‘s new kingdom building mini-game feeds directly into this. Once Evermore is established in earnest, a simulation game of sorts opens up, through which you can expand the city, build new facilities, and research things like new weapons and armour. Every operation needs to be staffed, though, with different tasks favouring different talents (represented numerically through a handful of stats). As more people join your kingdom, you get more potential staffers, and—crucially—their diversity is vital to effectively cover the wide range of facilities under your watch. 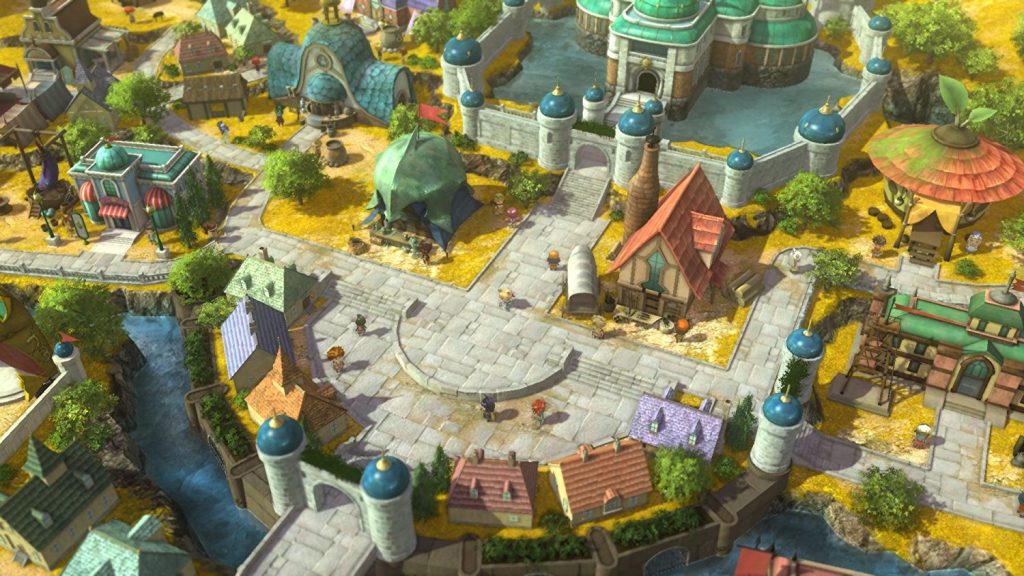 Also new is an army battle mini-game, through which you can fend of hordes of monsters and the forces of evil to liberate other cities and open new paths. It’s essentially a light strategy game, in which you command up to four squads across a battlefield, accounting for different units’ strengths and weaknesses to emerge victorious over superior numbers. It’s not the most deep or complex take on a strategy game, but it’s a fun little distraction when you want a break from the main game.

That said, the core gameplay of Ni no Kuni II is enjoyable enough that I didn’t often find myself looking for such a break. Instead of the command-based combat Ni no Kuni, this game is pure action RPG, with the usual array of weak and strong attacks, special abilities, and defensive moves. Like any other action RPG, reading your foes’ movements and dodging or blocking their attacks is vital; enemies tend to hit hard, and you can go down very quickly if you aren’t careful. It’s not a difficult game per se (and you can customise the difficulty, to a certain extent), but it’s a game that does encourage you to pay attention.

Ni no Kuni II adds its own spin on the standard action RPG formula with a creative weapon-switching system. Each character can equip up to three weapons at a time, and you can freely swap between them in combat. As you fight, your weapons gradually power up (even those that you aren’t currently using) and at full charge, they add extra effects to any special attack you use—maybe another hit, or a healing effect, or so on. However, using that boosted ability drains the weapon’s charge completely. 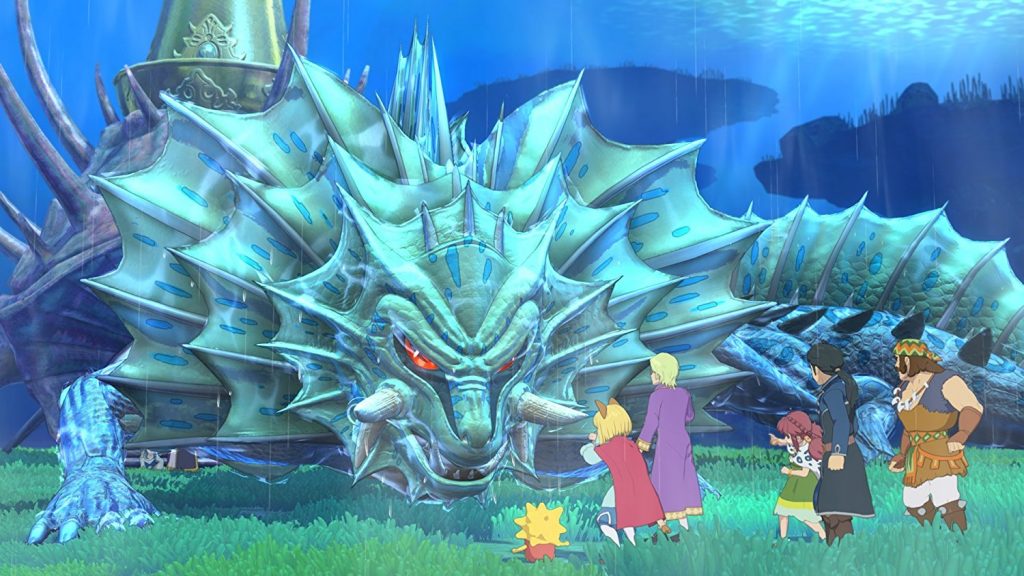 That creates a simple, elegant battle flow: power up one weapon, unleash a charged up special attack, switch to the weapon with the next highest charge, and then do the same, and so on. When you get familiar with a character’s attacks, you can put yourself in a position where you almost always have a weapon at near full charge, creating a smooth cycle of monster beatdown. To be honest, I tend to prefer turn-based battle systems, but the simple elegance of Ni no Kuni II‘s combat had me actively seeking out fights rather than avoiding them, as I often do.

Beyond that, Ni no Kuni II mostly follows the typical JRPG formula, with plenty of treasure-filled dungeons to explore, towns to visit, and an expansive world map to traverse. There’s nothing especially innovative in the game’s exploration systems, but in true Level-5 fashion, the level and world design makes that classic JRPG game loop as enjoyable as it’s ever been. The dungeons are intricate and expansive, and even the world map is full of the topographical quirks and hidden secrets that make exploration so riveting; gone are the days of a simple overworld, at least where this series is concerned.

Pristine cel-shaded animation gives the whole game the look of a hand-drawn cartoon, and every area feels like something out of a picture book—or, indeed, a Studio Ghibli film. It all comes together to create a world that’s utterly enchanting, and it’d take someone particularly stone-hearted to not get swept up in the fairy-tale fantasy of it all. 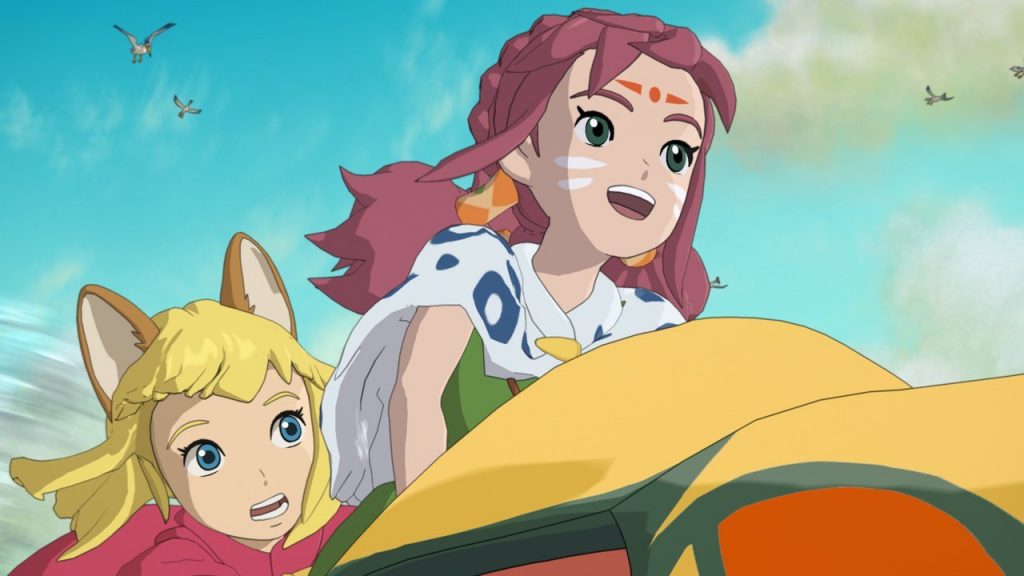 All of these elements are impressive enough on their own, but the way they all come together is what makes Ni no Kuni II a truly special game. Narrative, visual design, combat, exploration, and the new simulation and strategy mini-games all feed effortlessly into one another, creating a particularly cohesive game in a genre that’s not exactly known for that.

Even without Studio Ghibli’s involvement, Ni no Kuni: Revenant Kingdom captures that same sense of childlike wonder that the first game did, and uses that to tell a story that’s every bit as thought-provoking and charming. This is a JRPG that nobody should miss.

If you enjoyed this review and plan to buy Ni no Kuni II: Revenant Kingdom, you can support Shindig by using this affiliate link.

Ni no Kuni: Revenant Kingdom is developed by Level-5 and published by bandai Namco. It’s available now on PlayStation 4 (reviewed) and PC.