Moss is the best virtual reality game yet. That’s a big call to make, I know—and I make it without having played every VR game ever made—but I stand by it. A lot of VR games make neat ways to use the technology, a lot look to tell familiar stories in a new way, but I’ve never seen anything where the game design, storytelling, use of VR, and underlying ethos come together as perfectly as they do in Moss. This is the game virtual reality was made for.

At a glance, Moss may not look like a game that would benefit much from VR. This is, essentially, a third-person action-adventure game with “fixed” camera angles, so to speak. You control the mouse hero Quill from afar, with each whole scene laid out before you. I know I was skeptical of the virtual reality aspect when the game was first announced, because to watch footage or look at screenshots, it doesn’t look like a game that has any business being exclusive to VR. 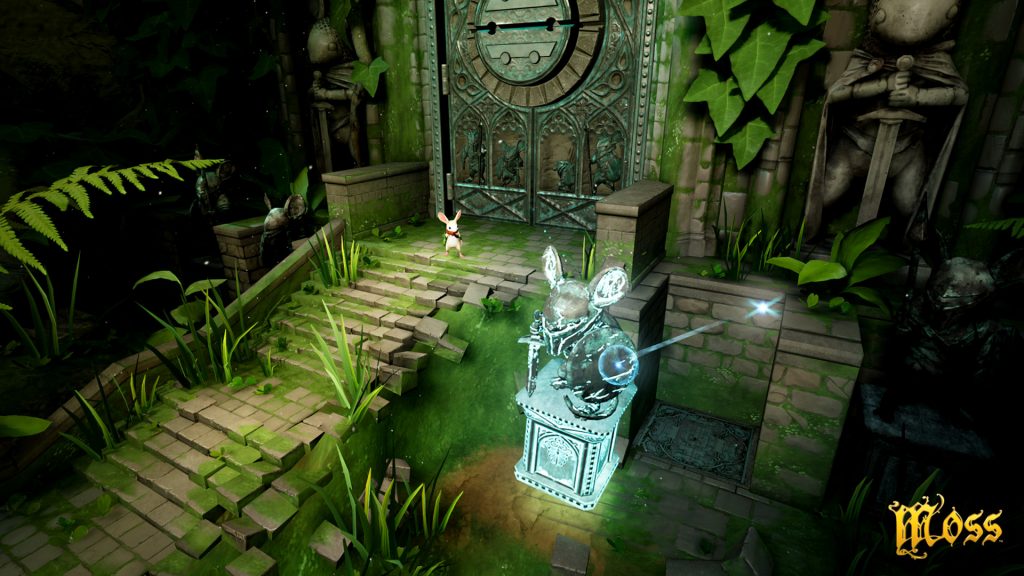 Moss opens inside a moody old library, a book set up on a reading stand before you. As you page through the book, you’re introduced to the world of Moss, a Redwall-like fantasy of small animals with big ambitions, where mice once ruled but lost their castle to more sinister forces.

Then, after reading the first few pages of the book, you’re taken away to a woodland scene. Quill is there, just going about her business, until she stumbles upon a weird glass relic that allows her to see you—that’s you, the player (or the “Reader”). Though she’s wary at first, she quickly learns to trust you when, with your power as a Reader, you’re able to help her navigate the forest and return to her village. The sudden disappearance of her uncle, along with the discovery on an unsettling new force, prompt the Reader-assisted Quill on a journey across the land to save her home.

Related reading: Though very different in style and tone, last year’s Tiny Trax is similarly good at using VR to foster a sense of playfulness. Read our review.

This where the VR element of Moss really comes into full force. Each level is like diorama, and you can reach inside it to push and pull objects around to create paths for Quill. You can generally see everything you need to see from where you’re sitting, but by standing up and moving around, you can find secrets hidden by perspective. In this way, Moss manages to be both a traditional third-person game, and an innovative spin on the whole concept of the third person camera in games. You are the “camera”, but you’re also directly involved in the game and in the story that unfolds through it. 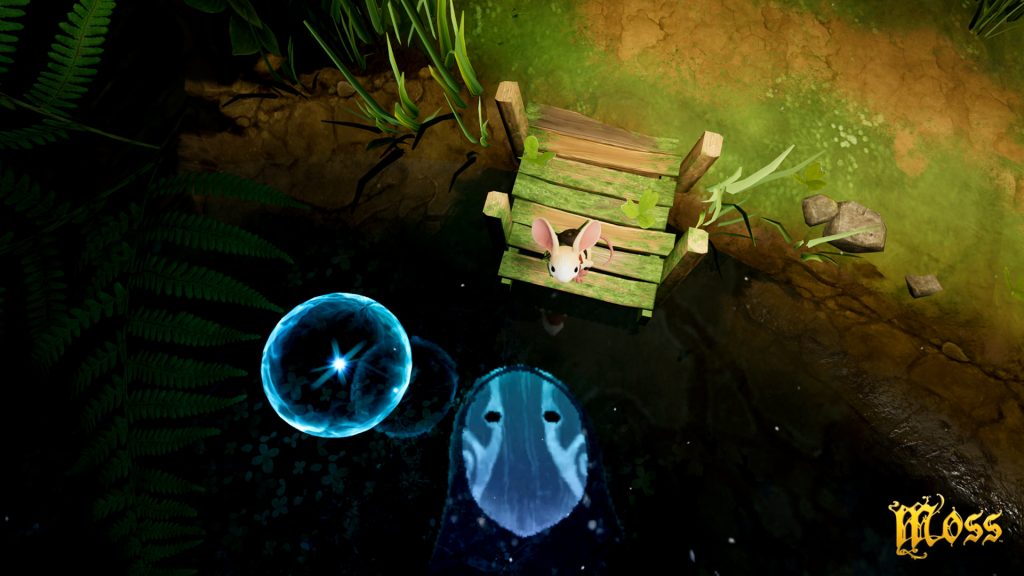 This is something that Moss plays to full effect. Quill doesn’t speak outside of storybook-framed cutscenes—she’s a mouse, you’re a person, so you can’t understand one another’s language. However, she’s so emotive and expressive that the lack of spoken word is barely a hindrance to your relationship; between basic sign language, high fives, gestures, and pats, Reader and mouse are able to communicate just fine. And in the process, the bond that you form with Quill feels real: you’re not just a person observing a story unfold; you’re a part of it, and the cute little mouse is your partner in that.

It helps that the world feels like it’s full of magic. Moss takes you through a series of familiar fantasy locations, like castle dungeons and a quaint little village, but they’re perfectly mouse-sized environments set against a much bigger backdrop. Quill’s village, for example, is built in and around the roots of some much larger trees, and as you head out at the start of your quest, you pass by a massive (to Quill’s perspective) deer drinking from a stream. One part of the journey takes you across a boggy quagmire, which was clearly once the scene of a human battle, because swords, shields, helmets and armour are scattered about, with some helpfully serving as walkways for little Quill.

Against this backdrop, you’re a human-sized human looking into her mouse-sized world. The levels feel like incredibly detailed miniatures, and to play Moss is to capture that imaginary wonder of a kid finding fairies in the back of the garden. It’d be awkward and probably dangerous, but I almost feel like the ideal way to play this game would be lying on a patch of grass and dirt. 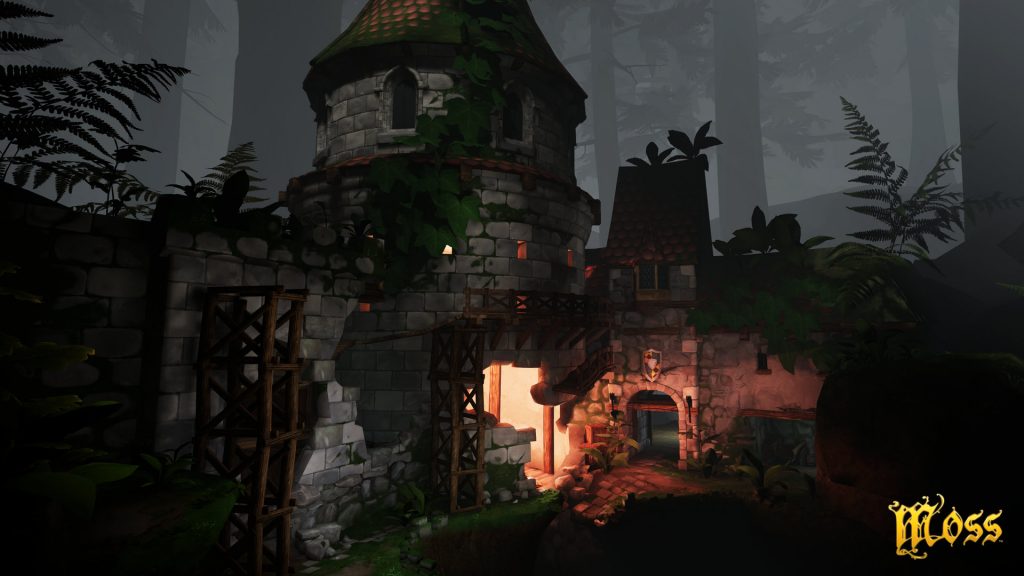 The story that unfolds across Moss is the stuff of fairy tales: simple, familiar, but enchanting all the same. Quill’s tale is a classic Hero’s Journey, a timeless story if ever there was one, but the charming characters and innovative setup make it feel new and exciting all the same. It’s a relatively brief adventure—I played through in about three hours—but that’s to the game’s credit. This is the sort of game that’s best played in one sitting, so that you can really just let the whole thing wash over you, and Moss manages to tell its story beautifully without overstaying its welcome.

That doesn’t mean I don’t want more of it—you best believe I do, and I’m eagerly looking forward to the announcement of the “Book II” hinted at in the trophy list. With Moss, the folks at Polyarc Games have managed to really push the boundaries of virtual reality game design and storytelling. They could have easily chosen to make Moss a regular action-adventure game, and they instead decided to work VR into its very fabric, creating the best virtual reality game we’ve seen yet.

If you liked this review and plan to buy Moss, you can support Shindig by using this affiliate link.